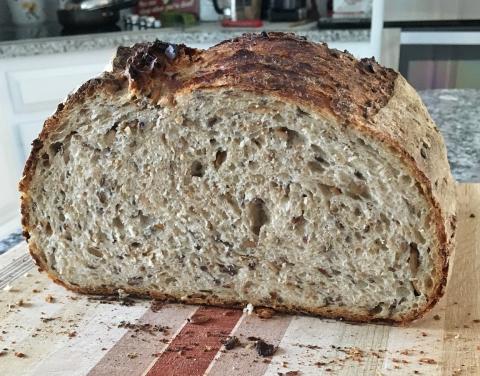 Inspired by the Community Bake a month or so ago, I decided to take a stab at Hamelman's Five-Grain Levain recipe.  This turned out to be a really delicious bread, which my wife likes a lot too, and there will be more loaves baked in the future.

For the Liquid Levain, I used my trusty starter (50 g), bread flour (250 g), and water (313 g).  I could not find any cracked rye easily available, so I ordered some rye chops online.  (Question for those who baked this loaf: Where can I get cracked rye?)  The Soaker then became rye chops (92 g), flaxseeds (92 g), sunflower seeds (77 g), oats (77 g), salt (6 g), and water (406 g).  Even though Hamelman states in his book that boiling water is not needed if rye chops are used instead of cracked rye, I opted to boil.  The oats were a generic kind that my wife microwaves for breakfast each day (i.e., nothing special).

The Final Dough consisted of bread flour (500 g), whole wheat flour (250 g), most of the liquid levain (563 g), the soaker (all), some instant dry yeast (1 tsp), salt (18 g), and water (261 g).  I included the yeast because I wanted the finished bread to be available by mid-afternoon.  In addition, my kitchen was 68dF, the levain and flour were 66dF, and the soaker was 64dF.  Even with 110dF water the dough temperature turned out to be 72dF at the end of some vigorous mixing by hand.

Vigorous mixing indeed.  After five minutes, there was still some dry flour in the bottom of the 12-quart Cambro tub, and my hand was encased in a glop of various seeds and wet sticky dough.  Eventually I managed to keep flopping the dough mass around until all of the dry flour became part of the mass, at which point I began some serious pinching and twisting of the dough to get some good gluten development ensured.  I also wanted to be certain that all of the various ingredients were somewhat evenly distributed, which I suspect is much more easily accomplished with a stand mixer.  On the other hand, this is a pretty sturdy dough that would challenge the motor of my KitchenAid, and I tend to use it only for things like ciabatta.  After a few more minutes I concluded that nothing much more was going to be achieved other than wearing out my hand and arm, so I stuck my Thermapen into the dough, recorded the 72dF dough temperature, and put the lid on the tub.

I went with Hamelman's forty-five minute rest before doing a set of stretch-and-folds, but with a cool kitchen I figured that a bit more time of bulk fermentation might be needed.  After another seventy-five minutes things looked right for pre-shaping.  The dough by then had expanded nicely, and several looks at the bottom of the tub revealed a nice collection of bubbles forming in the dough.  Pre-shaping was smooth, and as can be seen, a twenty minute bench rest saw only a little flattening (definitely no pancakes -- this is a rugged dough).

Typically I make two loaves, one baked in a Dutch oven, and the other on a baking stone.  Both began at 460dF.  After twenty minutes I removed the lid on the Dutch oven, and that loaf (the boule) went for another twenty-nine minutes.  (Heeding Hamelman's admonition to bake fully because of the increased hydration, I checked the internal temperature several times and was a little surprised to see how long it took even to reach 200dF.  In the end both were around 208dF.)  For the batard on the stone, I dropped the temperature to 435dF after thirty minutes and then had to put an aluminum foil tent over the loaf at the thirty-three minute mark. The batard baked for a total of fifty minutes.  These loaves were hefty too, weighing in at 1145 g for the batard and 944 g for the boule. 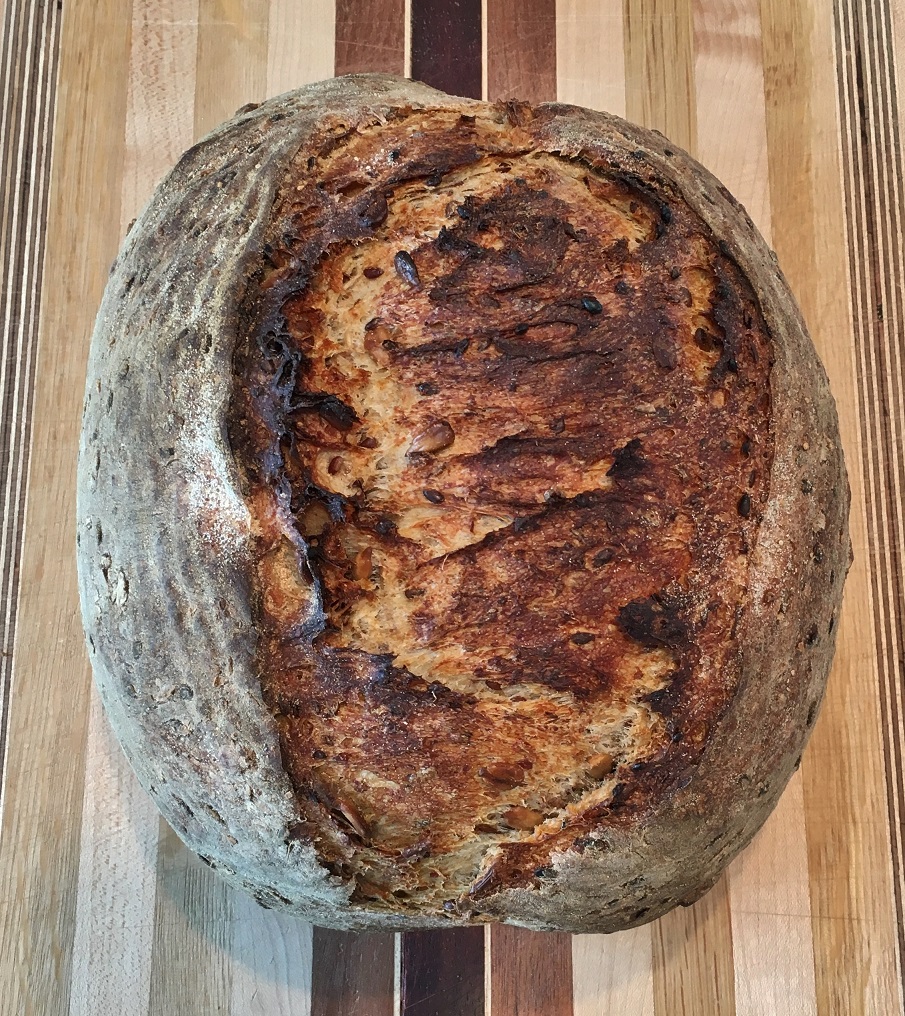 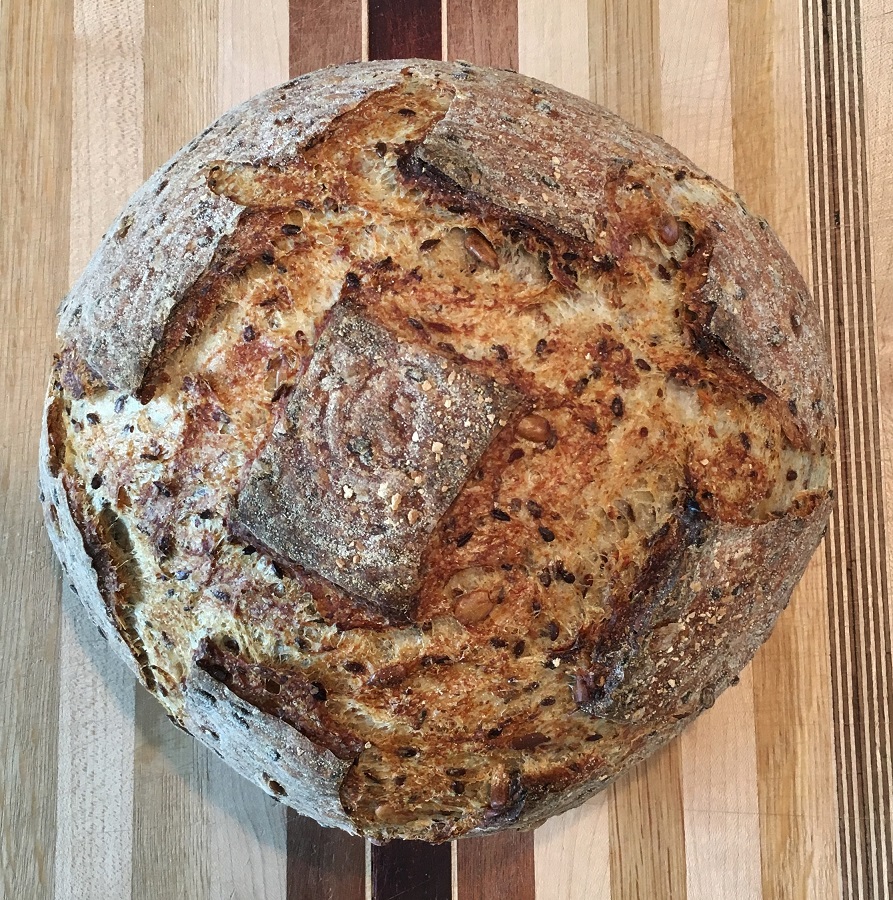 We put the boule into the freezer, but ate some of the batard for dinner.  Here is a crumb shot. 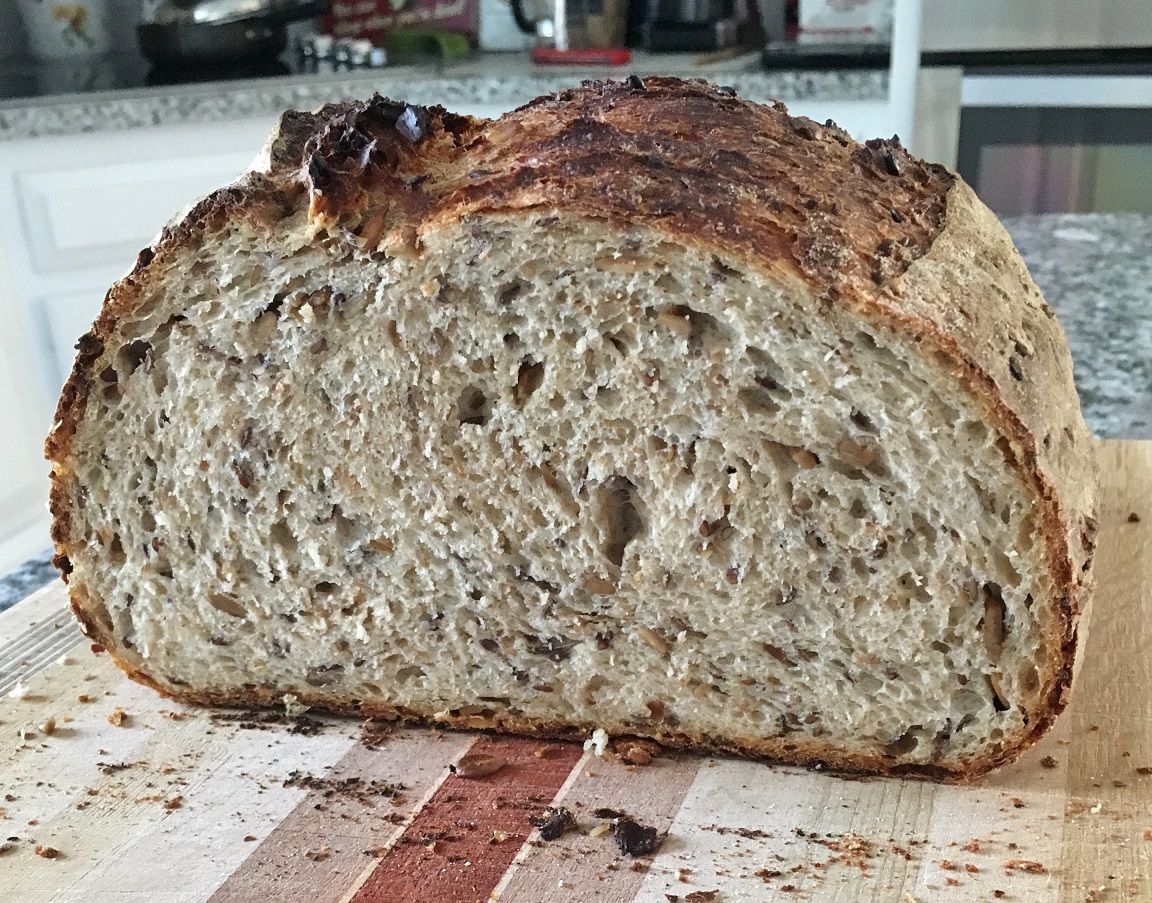 Many thanks to Danny for organizing the Community Bake, without which I wouldn't have baked this bread so soon.  Thanks also to those who posted in that thread, which I read in part several times and which provided helpful information.  Next time I will likely omit the instant dry yeast, and I will incorporate cracked rye if I can locate any without too much trouble.  For someone who usually bakes bread composed of the four basics (flour, water, salt, and starter), this was an interesting experience in handling a dough with multiple add-ins and different characteristics.  The reward was the pleasure of tasting a new bread.  Albeit my participation in the Community Bake was a bit belated, I hope that someone who has not yet made this bread might find some inspiration too and realize one of the benefits of being on TFL.

Beautiful bread!  These seeded/multigrain loaves are the kind of sourdough bread I really enjoy; the taste and texture must be wonderful.  Well done!

WatertownNewbie
March 9, 2019 - 8:07am
Taste and Texture are Wonderful

Thanks for your compliments.  Yes, the taste and texture are wonderful.  I am having some of the bread right now.  I toasted one slice and left the other alone.  Plain, with a little butter, and with a little strawberry jam topping here and there.  The bread is splendid in every way.  This is a great recipe.

Beautiful bread and especially beautiful pictures.  As crisp as that crust.

Thanks for the nice words.  The photos of the two loaves are a little washed out.  The lighting in our kitchen was not the greatest, and perhaps the overhead shots do not really capture the bread.  I usually photograph more from the side, but thought that the grains would show better this way.  Glad you found the photos fine.  The crust is crisp.  Overall I have no complaints about this bread.

and I have to plug up the courage again after I tried it on the community bake. You certainly cracked it! Kat

Thanks, Kat.  This was an odd dough.  It reminded me of working with dough for soda bread.  It seems to have no feel of gluten the way the breads I usually make have, and the process of trying to complete the initial mix left me unsure of whether I was going in the right direction.  Trust that it will all work out, however, and the resulting bread is a tremendous reward.

I have to agree, you nailed it. All aspects of the bread looks fantastic. Many participants in the CB mentioned the need toincrease the hydration. I think I added an additional 2% water, bring the total water to 100%.

If you haven’t done so already, it may benefit future readers if you post a link to this bake on the CB. I envision someone searching TFL for “Hamelman’s Five-Grain Levain and finding the CB. Your link on that post may be helpful. As of now the Five-Grain Levain CB has 336 replies. If I was searching for something special and came upon such an active post, I would read it.

Your bread is gorgeous!

Oh, I am able to use my mill to crack rye grains on demand, many others do also. But I don’t think it is necessary to this bake. I and others have made numerous seed and grain substitutes, and all of them taste great. I haven’t heard a single negative comment concerning substitutions of addins.

The only water that I added came when I dipped my hand in a bowl of water during the initial mixing.  There were times when I thought that extra water might be necessary, but I resisted the urge and figured that for this first go with the recipe I would try things the way Hamelman wrote them.  Thanks for your compliments.

So far this is my favorite bread recipe and I'll be eternally grateful to Danny for hosting the community bake. Your loaves look just perfect.  Hope you try next one w/o yeast.

I get cracked rye from King Arthur Flour.... it's just called rye chops.  But, if you have a coffee grinder, and you can get rye berries at a place near you (and if you are in Watertown MA, there should be plenty), you can grind it yourself. I just did this with wheat berries, which I got at my local Whole Paycheck.

Here's the link to the KA rye chops: https://search.kingarthurflour.com/search?w=rye%20chops&af=type:product

You did a superb job.

As a matter of fact, the rye chops that I used came from King Arthur.  Apparently, Bob's Red Mill used to produce cracked rye, but even the company website no longer lists it among their products.  Cracked rye is available from Central Milling, but I did not feel like having it shipped from California.  (By the way, I live in Watertown, CT, not MA.)  I have done wheat berries in a food processor for a recipe from Bread Illustrated, but have not done anything in my old whirly-gig coffee bean grinder (for the real coffee beans I use my Breville conical burr grinder).  There might be some rye berries available at one the local higher end grocery stores.

Thanks for your compliments.  This is a great recipe.

Now, that's a bread I could cozy up to.  Great bake Ted, and a dark crust just the way I like it!

As someone I gave one of these to said, "it's like a meal in itself'

Alan, you are so right about these loaves being a meal.  With all of the add-ins, they do become behemoths.  I prefer dark bakes (distinguishing between caramelized, which is good, and burned, which is not), and that is one reason that I left the loaves in for so long.  The crust is crispy but also chewy (go figure).  Now ... if I could only learn to make baguettes the way you do. ;)

Thanks for your thumbs up.  At a quarter inch per slice, these loaves would last you awhile.  Happy baking to you and Lucy too.

Fantastic!  Using commercial yeast is in my mind just a timing issue for a professional baker.  It doesn't hurt, but with few exceptions any bread I plan to retard is not going to have it.

Thanks for your praise.  I had the last of the batard this morning, and it was still yummy.  I agree that commercial yeast is a timing thing.  My general preference is for letting my wee beasties and the starter do all of the rising.

From experience, I find the additional yeast negatively affects the flavor. It doesn’t taste bad, it’s just that the “levain only” taste noticeably better. Other bakers have also made similar comments. I imagine the longer fermentation increases the flavor.