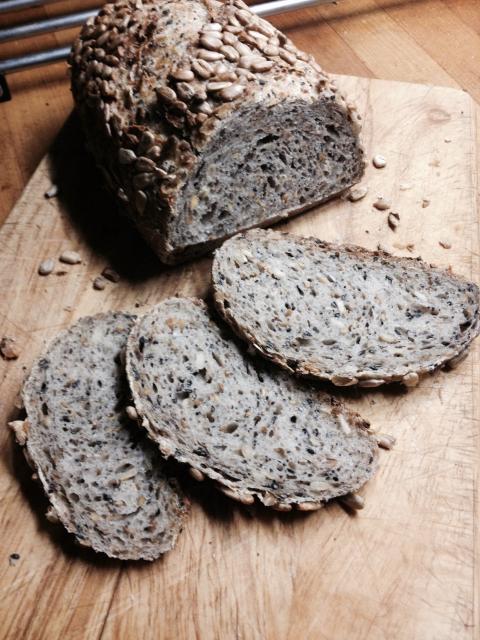 Having pretty much healed from a lost argument with my mandolin slicer, I decided it was time to make another attempt at the 5-grain loaf and put into practice the kind advice given by the great folks here.

So built the 3-stage levain, made the soaker (toasted 5-grain flakes, flax, poppy and black sesame seeds), mixed the dough as per the recipe, first whisking together the dry ingredients in one bowl and the wet stuff in another, then added the dry to the wet. Per Dan's advice, gave the dough two sets of 150 SLAFs, adding a few grams more water to make the dough slappable. Over the course of the next 90 minutes, gave the dough two sets of letter folds on the bench.

Retarded the dough overnight, then preshaped, rested and shaped loaves the next morning with sunflower-seed coatings before proofing in baskets for a couple of hours. Placed the 3 loaves (about 450g each) in the roaster, spritzed, slashed and spritzed, then baked covered for 25 minutes and uncovered for 20.

While I'm still a long way from the lacy, round slices that everyone else seems to have come up with, I'm pretty happy with the progress that's been made. I didn't get to taste these, they were given away, but have been assured that this is "great bread".

Well, then it was time for a little douceur. I could make my usual yogurt cakes, or try Skibum's chocolate biscotti, for which he generously shared the recipe. It didn't take long to decide in favor of the double chocolate. I swapped in a quarter-cup of chopped crystallized ginger with the chocolate chips; other than that, I followed the recipe as closely as I could (except that I didn't have an AP flour, so used half bread flour and half golden plain flour).

Edit: just remembered that I replaced the 6 T of butter with just under 5T  of coconut oil...

Once again, whisked together the dry in one bowl and the wet stuff in another. Added the dry to the wet in thirds. Tossed the choco chips and ginger in the last third of the dry (the little bit of flour coating helps keep the add-ins from sinking to the bottom).

The stuff felt like clay! I'd been wondering how I was going to shape a log, but it was pretty much the only thing that could be done with a dough that stiff. Ski says to form one 12x4 log, I opted for two 12x2. Easy peasy.

And, boy, are they good! I can see that I already need to make another batch. 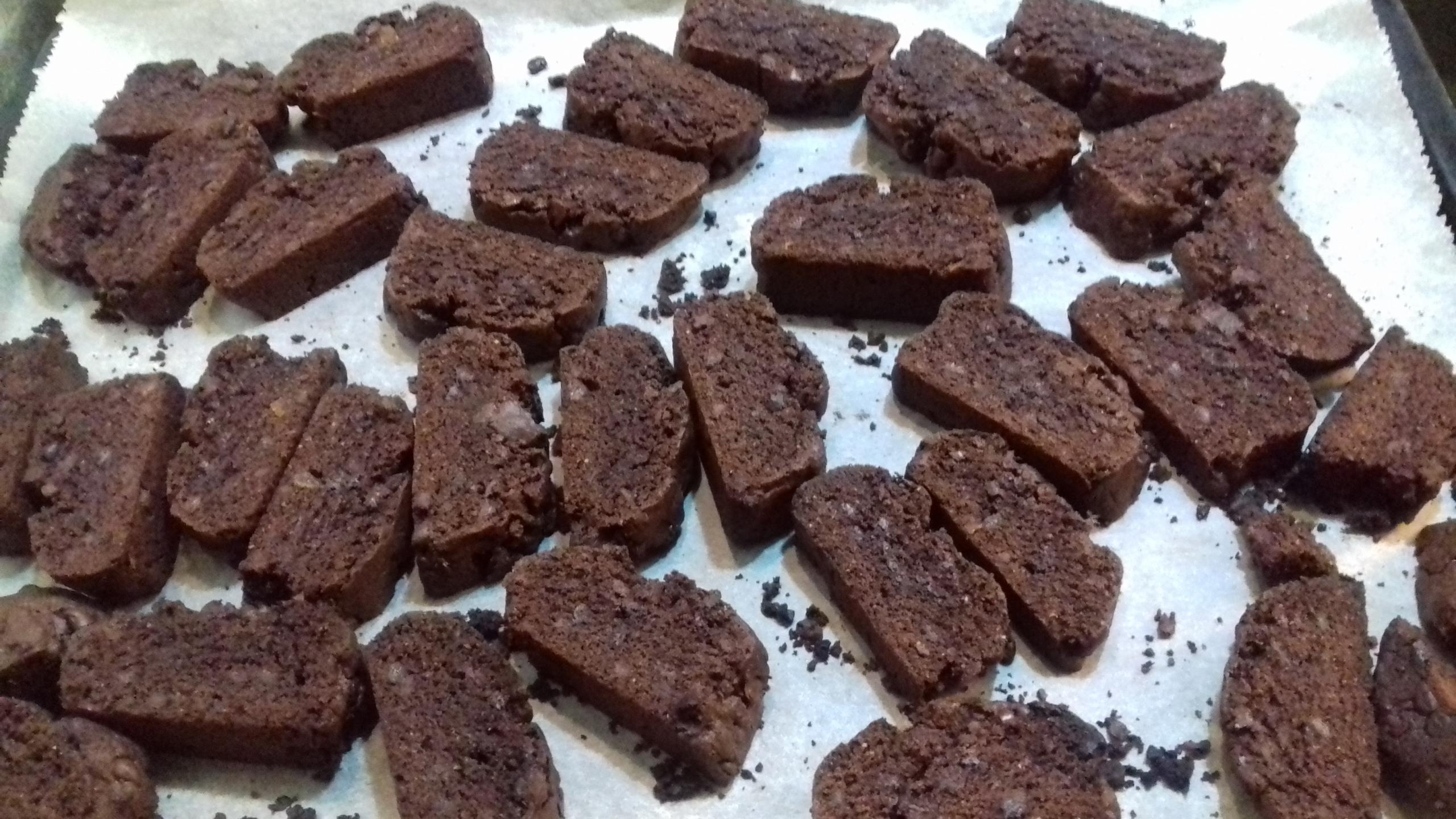 Whew, time for something hands-off.

Shiao-Ping's cashew, carrot and turmeric bread was one of the first loaves I bookmarked when I discovered TFL. I've had the ingredients on hand for months, so finally decided to give it a go.

Mixed up the 81% hydration dough per her recipe and let it sit. And sit. She's right: it was too tempting: one has to fight the overwhelming urge to scoop up the mass of soup and try to give a few good rounds of SLAFs. But it would have been a very messy procedure  This was almost a batter, more than a dough. It smelled and looked lovely, so I just contented myself with a couple of letter folds about four hours into the bulk.

Oddly enough, the pre-shape went quite well, but I found it too hard to get good tension on the final shape. So wound up with a couple of flat loaves that have okay crumb and wonderful taste and texture. 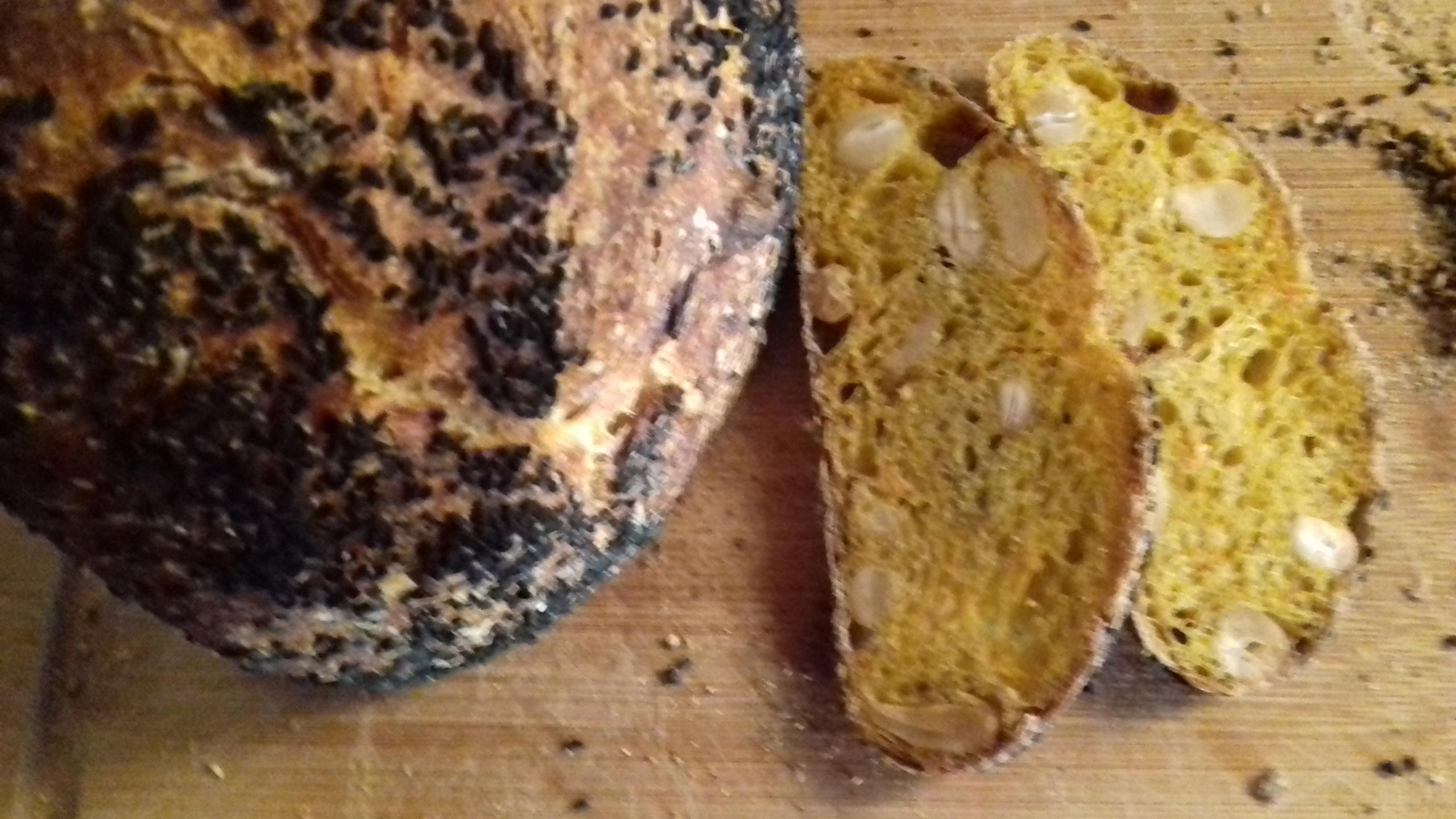 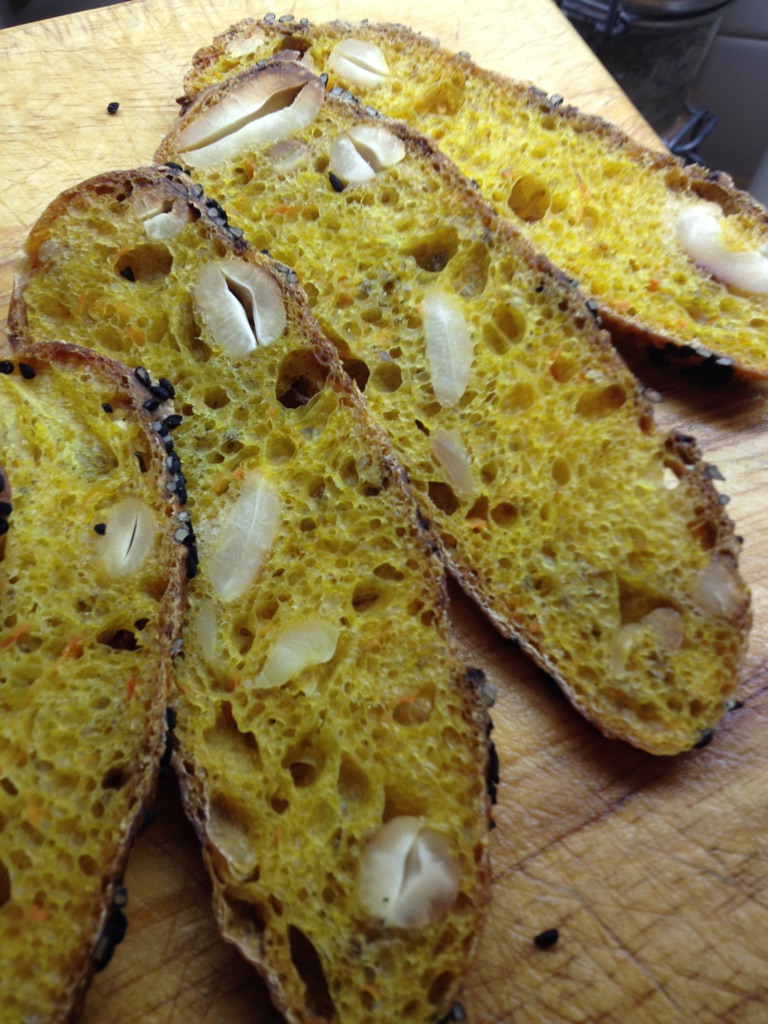 This was excellent toasted, with just a scraping of butter! The nigella-seed coating works well with the turmeric and the cashews. Will be trying this one again, perhaps lowering the hydration a bit to get a more shapeable dough.

Edit: There were, in fact, two things that differed from Shiao-Ping's recipe: I used fresh grated turmeric, rather than dried. And instead of freshly extracted carrot juice, I used some organic stuff out of a bottle. I was chagrined to read -- after mixing the dough -- that there was an added acidifier: lemon juice! Whether one or both of these had an impact on the dough's soupiness, I may never know.

Your breads look great and the biscotti delicious! Interesting you did two logs. If I had it to do over again, I would also do two logs as doing the fat log meant that after 30 minutes not all was baked to the point os being able to cut well. Thanks for the shout out on the biscotti,and . . .

Truth be told, I did the two smaller loaves so hubby wouldn't be stuffing himself with "just two or three cookies". As it turns out, I'm the one stuffing myself with these. A couple of things: I might add a pinch of cayenne pepper to the flour mixture (choco and chili are a marriage made in heaven). And -- I know it couldn't be called biscotti anymore -- have you tried rolling/pressing this into a sheet pan and treating the dough like a bar cookie? Just thought of that as I was burning my fingertips while cutting :-D

You posted something else that I've gotta try. Can't remember now, will check your blog again.

I meant to put some chili in this batch and forgot. Thanks for the reminder! and

It all looks so yummy! Great job!

Nah, this was over the course of a couple of days, I'd been out of commission at the beginning of the week and was going through withdrawal ?.

Everything looks so nice, Carole.

Did you notice how the bread rose higher with the diagonal (sausage) score?

It's not just the scores, I think the extra water and the 300 SLAFs that you recommended had a lot to do with it. Still shooting for your round slices, though!

You must try the biscotti  -- or not. They are seriously addictive. And too easy to make.