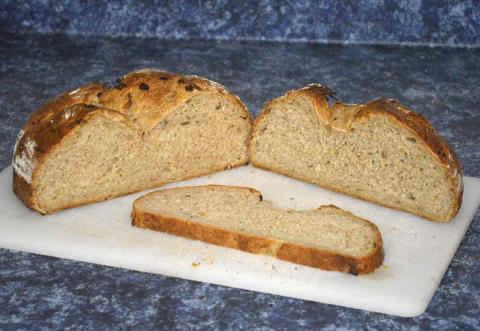 Now that I have discovered a good source of Montreal smoked meat in town, I determined to do the deli rye from Peter Reinhart's, "Bread Baker's Apprentice." I have baked this recipe often, but this was the first time I built a fully rye starter. My previous starters were a wheat/rye mix. this time I starting from my mother, I fed with rye flour four times over three days and for the fourth and final feed added the sauteed yellow onions. After a few hours it was time to mix and bake.

I proofed the loaf seam side down in a round banneton and baked seam side up. The way the loaf kind of blew apart on top points to some deficiency in my seam sealing. As always this is a work in progress, stepping back to a method of baking I haven't done in two or so years. 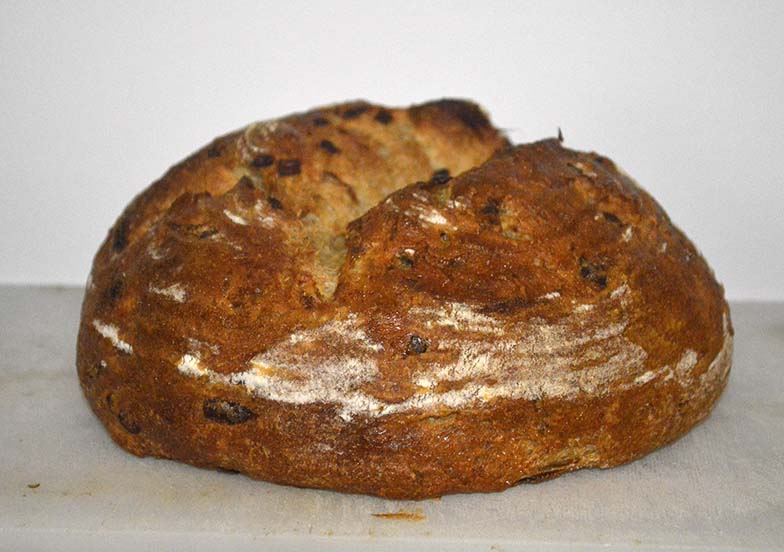 Starting the oven at 400F, I then turned the oven down to 375F for 20 minutes with steam and finished at 350F for 20 minutes no steam. The resulting loaf was delicious with a soft crumb. Perfect for pile it on smoked meat sandwiches!

Though I halved Peter's original recipe, I ended up using a higher percentage of starter than the original -- 180 vs 164 grams. The only thing I would change next time I bake this is to make sure the onions are cut to a uniformly small dice. A little sloppy on my dicing, I had a few more larger chunks than I would like. Great recipe GREAT bread!

And you've made a sterling example of it, Ski.

If you want another shot of flavor, mix in a few grams of dill seed in place of the caraway seed for your next batch.  The dill plays very well with the onions and the rye.

I will try your dill idea on my next bake. It sounds like an interesting flavour note.I had forgotten how much I enjoyed this bread and am now keeping a rye starter beside the whest starter in my fridge.

. . . brilliant! I added 1/2 tsp of dill along with the normal 1 tsp of caraway seed.  It really does add a nice flavour note to the bread. Excellent suggestion!!!

It was a happy find for me, especially with a spouse who abhors caraway.

your own smoked moose on it if you ask me!  Nothing like smoked moose on NY Deli Rye is one of Lucy's favorite sayings of late for some reason.  That is some nice rye bread for sure!

Well dab, I do have a smoker, just not a cut of moose to smoke at the moment. I do have a hunter friend that got a couple of big white tails lst fall and he keeps promising some meat. Must check if my phone still works.

or they aren't in Canada or of French decent!  If you tell them that they will get some I bet:-)