This one is similar to the ones we have made of late for the lovely wife except it wasn’t made in a pan.  Other differences were that the levain was made with home milled whole; rye, red and white what and oat groats as a single stage and the levain was retarded for 24 hours after it doubled. 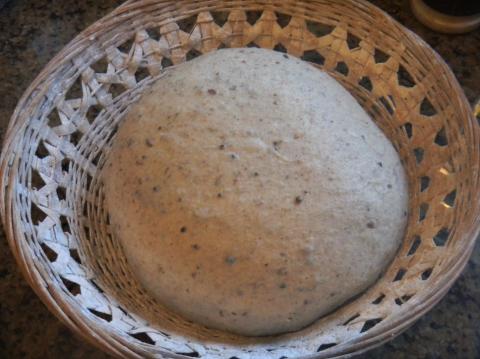 There were 7 different grains if you count the flax which is a grain that is overlooked many times when counting them up.  Only the spelt and the durum were sprouted but they were not whole grains since Bob Red Mill didn’t specify that they were on the package. 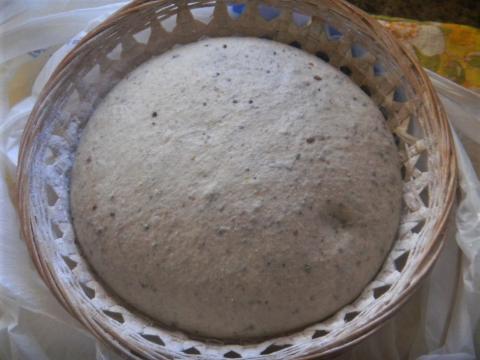 The other seed besides flax was black sesame seeds.  Lucy called this a 12%’er since the whole grains were 12%, the 100% hydration, pre-fermented whole gain levain was 12%, the sprouted spelt and sprouted durum were each 12% and the coarsely ground flax and black sesame seeds were also 12 grams each. 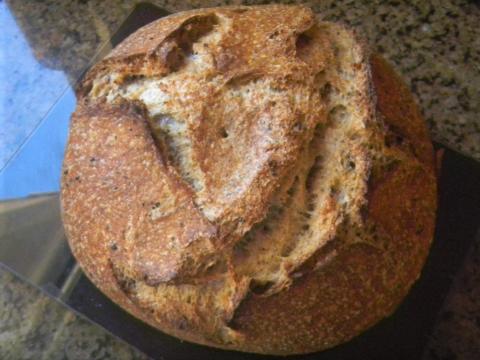 Lucy said that we should have done a 12 minute autolyse with 12 sets of 12 slap and folds and 12 sets of 12 stretch and folds all on 12 minute intervals.  That was when I put her in the kennel to think about if she ever wants to be promoted a Baking Apprentice First Class on her 15th birthday in May – or not! 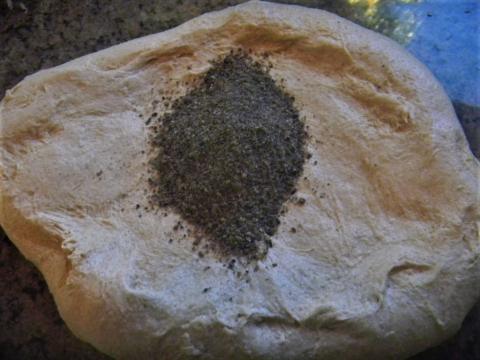 We did do 3 sets of slap and folds and stretch and folds from the compass points each on 30 minute intervals after a 30 minute autolyse with the PH salt sprinkled on top that brought the overall hydration up to 72%.  At the end of the autolyse we added another 3% water to get a double hydration going and make it easier to mix in the salt with a spoon before adding in the warmed up levain. The levain had been sitting on the heating pad for an hour and a half after being removed from the fridge and stirred down.  It had risen 25% while warming up so it was ready to go.  The ground flax and sesame seeds went in in the first set of stretch and folds that were modified to the Strutting Peacock Fold technique.  We like the little black spots they make in the dough once they are thoroughly mixed in an hour later. 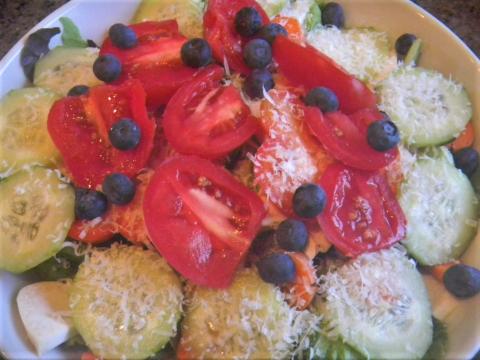 We then did 4 folds for the pre-shape and then stitched the dough together and then rounded it into a very tight boule,  put it seam side down into rice floured basket, into a plastic t-shirt grocery bag and then into the fridge for a 13 hour retard.  It only rose 30% so we put out on the counter the next day for an hour and half and it was too cold to do too much so we moved it to the heating pad for another hour and half before un-molding onto parchment on a peel. 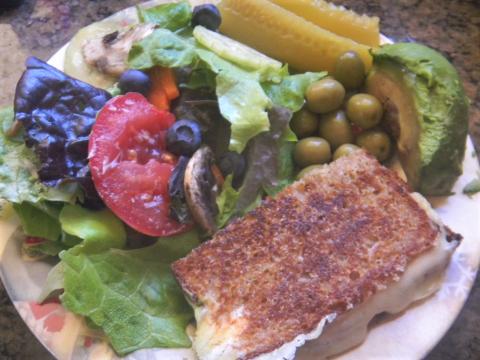 Grilled Cheese Sandwich lunch with green sides of salad, pickles, olives and avocado.using my wife's bread so don't tell her.

No slashing was necessary since it was proofed stitch side down.  We slid it onto the thin bottom of the combo cooker, spritzed it and covered it with the thick top and into a 500 F oven it went for 20 minutes of steam at 450 F since it was a small loaf of 909 g total.  When the lid came off we baked it for 8 minutes at 425 F and then took it off combo bottom a put it on the stone to finish baking and the bottom wouldn’t burn. 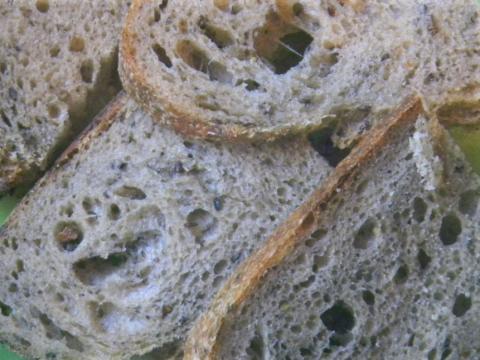 12 minutes later the bread was nicely browned.  It bloomed and cracked well and even blistered a bit too.  Will have to wait on the inside but it has promise to be a bit more open than the panned bread at with basically  the same recipe and hydration with the addition of seeds for this one. This bread was delicious.  had a plain end of one quarter.  This is why we bake sourdough bread.  Way more open than the pan bread and it tastes better with the seeds! I think your signature loaf is this sprouted one.It always turns out superb and I can tell it is your from picture right away.

I had fun as always reading your post and could not help but laugh at Lucy's "12" method. Now, I have no idea what Strutting Peacock Fold technique means.

I was always told by Lucy that the Turtle Chacon was my signature loaf from 2013.  Now I have 2 signature breads:-) 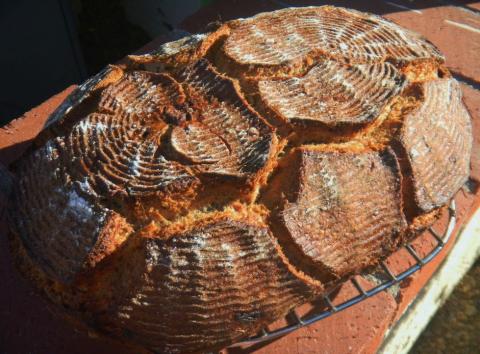 Both are pretty nice breads for sure so either one is a treat.  I can always tell the breads of many Fresh Lofians from the top photo too and am always surprised when they fool me - which is pretty easy .  I was gong to retard the brad for 12 hours like Lucy specified but had fun telling her it's 12 hours Lucy and I forget what I am supposed to do?  Guess the dough stays in the fridge and I'm not even looking at it to see if it needs to be baked!

After the Sleeping Ferret Folds, which I use just about every bake, the Strutting Peacock fold is my next favorite.  That is where you have add ins and yo need to get them well incorporated s easily and lazy as possible..  You open up the dough on the counter by spreading it out on a  the counter like a peacock's tail, spreading them out and as you fold the dough from the compass points to the middle one fold at a time you put more add ins on to the clean part revealed as you fold, until all the add ins are in the dough.  After 2 more sets of Strutting Peacock Folds, Peacocks always strut, the seeds are evenly distributed and it is tome for you to strut a bit

Glad you liked the bread pul; and happy strutting:-)

and I am sure it tastes amazing as well! Love the crumb!

Now I have to come to the rescue of poor Lucie. I think she might have been on to something with her series of 12! You really need to listen to her sometimes and go with the flow. I feel bad that you totally nixed her ideas and put her in jail instead! You big meanie!

She wasn't there very long before she started crying like a 12 year old to get out so she could chase the Roomba and teach it a thing or two.  I'm still not doing 12 sets of 12 slap and folds unless you can do 144 all together:-)  At least she knows who her Master is and that's all that counts in the Really Big Green Meanie Book:-)

Glad you like the bread.  Did you notice the poke test on the fully proofed picture.  It never did come all the way out and proves why it is totally worthless.  I poked it before it went onto the heating pad an hour and half before the picture was taken.

on cold dough. It doesn’t work.

I am surprised that you didn’t bake it right out of the fridge. My loaves don’t rise much in the fridge and I haven’t had much luck with extra proofing time after the fridge. Those loaves never turn out as nice as the ones I bake cold.

but Barney strongly disapproves how you treat Lucy as your apprentice!!!  She deserves at least a couple of treats for that!...

I have to give sprouted grains a go...it has been on my to do list and I have rye from my last trip to Germany in the cupboards to sprout...

about 18 hours in a 72 F kitchen.  You will like the taste of sprouts in your bread and it will move along a bit faster when it comes to ferment and proof too.

You tell Barney he is lucky to get treats,  I don't ever give treats to Lucy.  They are just another thing she would beg for so I just feed her bits from the table instead:-)  The girls give her treats when they want her to do the only trick she knows - shake!

Spectacular outside, too, too tempting inside!

I lost count, we're there 12 dozens in there, or a baker's dozen?

It's a good'un! Hope you got to enjoy it.

Too, Too Many 12's and one 13 thrown in:-)  A couple of weeks ago Lucy was into 20's.  Now she is talking about 23.33 and a third what ever that means. hard to keep up with her these days.  I'm just glad she is way better then she was and keeps coming up with bread recipes.  Glad you like the bread  and happy baking DW

Perfect crumb for this bake!  Lucy is certainly worthy of her title and should get a promotion, at least according to Max and Lexi.  I can only imagine how tasty this must be with all those goodies packed inside along with the extra flavor the sprouted flour imparts.  I baked a sprouted Kamut bread the other day that I will post soon that tasted great.  It's the first sprouted bread I've done in a while and I need to do some more now I remember how good it tastes!

Lexi and Max send some belly rubs and kisses to Lucy and tell her she has every right to chase that big bad Roomba thing.  After all, they say it sounds like a big furry cat or squirrel and she must put it in its place, right?

but as soon as she sees it she knows it is an evil robot that needs to be attacked before it can take over the whole house with its dark cleanliness!  She gets all worked up at first and then gets bored and ignores it unless it get too close to her for comfortable sleeping.  I can't wait for her to be sleeping when it comes on and it actually bumps into her and wakes her up. - that should be interesting.  If she keeps her nose clean and doesn't upchuck on my toes till May she will probably get an promotion but we will see if the world ends bu by then or not.  We know it is going to end in 12 years but AOC could be off by 11 and 3/4 years too if a large fast asteroid heads out way. or the sun stops shining.

Lucy sends her best to the Black ones and their 5 furry friends.  Glad you liked the bread Ian and you won't go wrong with the sprouts.  Happy baking!

sign her name in cursive really bad.  She just can't figure out which paw to use!  Silly girl:-)  Glad you like the bread and Happy baking A-MB

and I missed your seeded SD post. If you hadn't post it on the thread, I likely wouldn't realize it...

I like SD bread way more than pan bread too. The crumb of this one looks really soft. I love the Thai green seafood curry! People usually consider curry as greasy caloric dishes but we know that it doesn't have to be :)

Nice bread: I'm sure even your wife would approve of it!