Our oven has been rather busy lately, especially with the Christmas cookies that my wife likes to make at this time of year.  In spite of all of that going on, I still managed to work in three different breads yesterday.

First up was the Tyrolean Christmas Zelten from The Rye Baker: 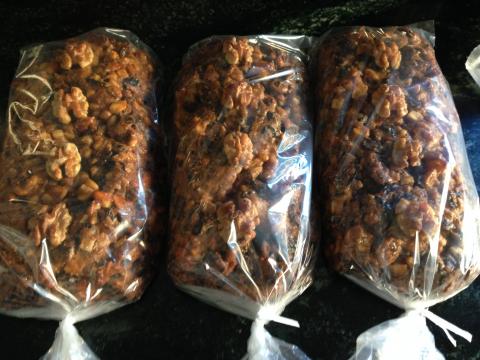 These gems are essentially fruit and nut loaves lightly glued together with the smallest possible amount of dough.  Raisins, golden raisins, chopped figs, pine nuts, and any of hazelnuts/almond/walnuts spend the night in a rum soaker.  (I used almonds.)  Right alongside those, candied lemon and orange peel have their own beauty bath in white wine.  The next day, rye flour, all purpose flour, fennel, anise, cinnamon, nutmeg, cloves, lemon zest, orange zest, sugar, salt, egg, and water after blended into a dough.  After the dough has risen, both soakers are combined with the dough.  The soakers contribute enough liquid that the dough becomes more of a batter but you soldier on and shape three loaves on parchment or a pan liner.  After baking and cooling, the loaves are wrapped or bagged and allowed to ripen for a couple weeks.  These should be ready when the kids come to town for New Year.

The second bread was Bagguettes with Poolish from Hamelman's Bread, Vol. 2. 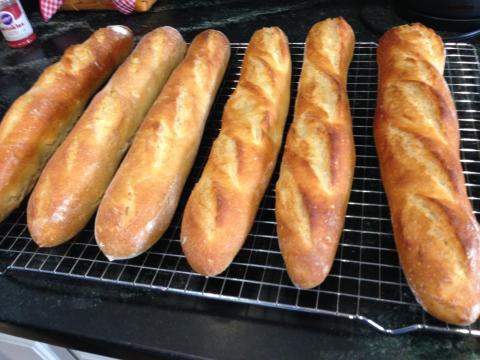 The baguette choir was singing as these cooled.  Since my wife wanted these as the base for crostini, the less than stellar slashing isn’t particularly worrisome and the somewhat bready texture will actually accommodate the toppings better than a wide-open crumb.  “It's not a bug; it's a feature!”  Or something like that.  I used the metric quantities, divided by 10.  Per Hamelman, that should yield four 22-inch bagguettes.  Knowing that mine would be 15-16 inches in length, I opted to make six instead of four from the same batch.

The third bread was a perennial favorite here on TFL, Cream Cheese Braids: 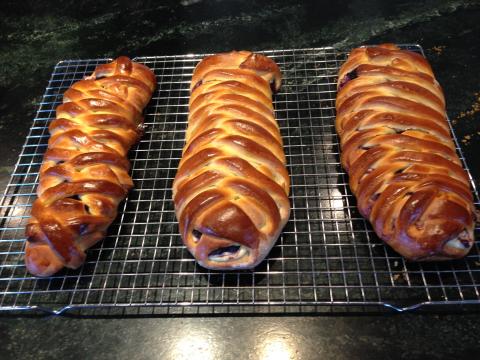 There was a batch of unused blueberry filling lurking in the refrigerator from a recent class, so that was the primary motive for baking these.  Were I making them specifically for a holiday gathering, I might have chosen the cranberry filling, instead.  Since no one has ever turned these down previously, I don’t expect to hear any grumbling about them this evening.

Sometime in the next week or two, I need to make a rye bread, too.  If anyone has a suggestion for one that would be a good analog for the miniature cocktail rye breads that sometimes show up at the deli, I’m all ears...

Nice baking!  Your kitchen must have been smelling real good with all that baking going on!  I have to try some of the recipes I never tested from the Rye Baker.  As you know I usually concoct my own creations but really need to bake some of the recipes from that book.

And yes, do explore The Rye Baker whenever you have a hankering for rye bread.  Stan has gathered some remarkable breads between the covers of that book.

It used to be that I could identify one of your bakes just by the title of the blog post.  With some of Elsie's recent posts, it is getting harder to know whose is whose.

Merry Christmas and a very happy New Year to you, Ian.

but it's another story once you click to read the post... I hope you didn't get too disappointed when you find out the post is mine rather than Ian's :)

I'm with dabrownman: the braids look gorgeous! They always appear fancy yet they're indeed so easy to make. Perfect for a crowd! As much as I love cream cheese, it seems heavy sometimes... Adding some kind of fruit does the trick to lighten things up a bit.

Nice to see you posting, Paul!

Ian is one of the most creative bakers here; always willing to push the envelope with ingredient choices and combinations. And he makes some really good breads.

What I have seen in your posts is a kindred spirit; someone who is equally determined to see and exploit new possibilities.  Humility is admirable but don’t ever sell yourself short, Elsie.  Keep honing your talent and skills.  And please continue to let us marvel while you do.

for the Holiday season especially with the wine.  If it were brandy they would be close to fruit cake batards:-)  Now I am inspired to make an apple and pear cream cheese braid.  Those sticks look like mine!  Perfect for your wife's base for toppings. At least you found some rye for this week's bake!  lovely bread Paul and

Happy Holidays to you and yours.

The zelten are truly special.  There must have been some other, earlier Ians living in South Tyrol to have come up with an ingredient list like this.

These hit every check box on my fruitcake list: dark, spicy, fragrant, moist, more fruit than cake, and (other than the candied fruit peel) all of it real dried fruit.

Have a merry Christmas and a happy New Year.