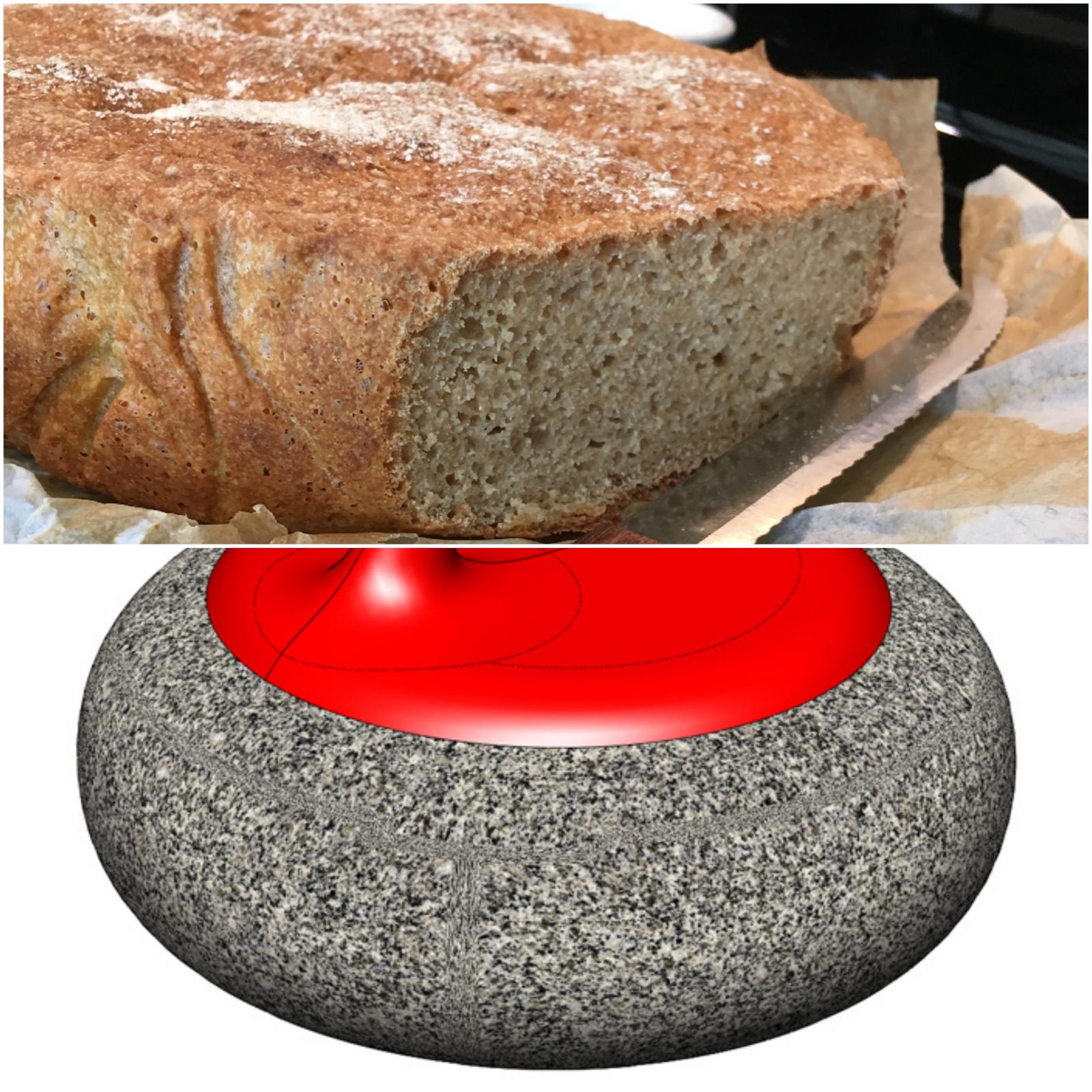 Here's my second attempt at sourdough bread.  Hanging out below is its cousin, a curling stone.  ;-)

As you can see, I have zero oven spring.  The crumb is a little gummy.  I'm pretty sure I over proofed.  On the upside, it has a nice flavor and the crust is crunchy/crispy.

I'm using the recipe for basic sourdough bread from The Bread Baker's Apprentice.  I grind my own flour and this attempt is hard white wheat.

I hope your bread wasn’t as heavy as the curling stone :-)

Are you new to sourdough baking? Tell about your baking experience, your starter, and did you follow the recipe closely.

The more information and images that you provide, the better able we are to make suggestions. We are here to help!

Any info you can give us will help the rest of the posters suggest changes.  Photos help too.

With that general comment, I will make a few observations.  (I have BBA open in front of me and am looking at the recipe.)  First, there is a distribution of small holes, so it appears that you have an active starter.  How did the top get completely level?  Even an overproofed loaf will have some rise in the center and not look like a flat-top haircut.  The recipe states bread flour, which has a higher protein content than all-purpose flour (for example).  I wonder what the protein is for your hard white wheat.  The recipe calls for proofing "for 2 to 4 hours", which is a wide range.  Much will depend on the temperature of your kitchen.  Did you go beyond 4 hours?  Did you do the finger poke test?  What was the dough like when you were ready to put it into the oven?

These are some initial questions, but there are many more I could ask.  Please recount the baking process as best you can.  (If you do not already do so, taking notes during a bake can help immensely.)

Happy to help.  Happy baking (and I suspect that at any rate your result tastes better with butter -- or even plain -- than would the curling stone).

Looks like a banana bread type crumb.  What you do have is evenly baked so the oven set up appears good.

How fine is the mill grinding and did it grind In several passes?

Your bread looks pretty much exactly my first one!

What was wrong with mine I only found out a bit later when I treated myself to a stone mill. At first, I had ground my own flour using a handmill not with stones but steel. I never knew that this kind of flour doesn't soak up nearly as much water as stone ground flour! So my doughs were much, much, much too wet. The loaves turned out better as I reduced the amounts of water in the recipes. Imagine my surprise when I started to use the stone ground flour and the recipes suddenly were correct again ;-)

I am completely new to sourdough baking.  I’ve done plenty of commercial yeast baking over the last 5 years.  I shockingly got a starter to grow a few weeks back, which gave me some confidence to tackle a sourdough bread project.  Generally speaking, I love making bread (at least the commercial yeast and quick bread varieties).

I have no idea what my starter hydration is.  In fact, I didn’t follow any one set of rules.  After the second day with my starter, I took 50g of starter and added 75g of KA white whole wheat and 75g of filtered water.  I did that each day for 2 weeks.

The reason I used hard white wheat flour for my sourdough bread is because I have those wheat berries on hand.  I used my Wonder Mill, on the bread setting, to mill the berries.  This is the same setting I use to make my commercial yeast breads.

On day 1, I made my barm, following the instructions to ferment at room temperature for 6 hours

On day 2, I made the firm starter, again following the instructions to ferment at room temperature for 4 hours.

I mixed in my KA mixer until it passed the windowpane test.  This was 4min mixing, 10min resting, then an additional ~6min mixing.

I fermented for 3 hours.

I did NOT divide the dough because on my first attempt, I thought this was the reason everything fell flat.  As in, I’d removed too much air during that division.  I have a nice size, cast iron dutch oven so decided to keep the dough one unit vs. dividing it.

I then proofed for 2 ½ hours in a glass mixing bowl (it’s all I have for now), with a parchment paper (coated in olive oil) lining.

At the 2 ½ hour mark, the dough appeared to have doubled in size.  However, it was sticking to parts of the plastic wrap which covered the bowl.  And, it looked highly hydrated.  As I ever so slowly began to remove the plastic wrap, deflation took place.  As the dough sank, so did my heart.  :-(. I really thought I had pulled it off this time.  I did a finger poke and the dough stuck to my finger.  I didn't know what to do other than just bake it at that point.  Should I have waited longer and let it dry out some?

it sounds like you overproofed your dough. Using a round bowl, it is difficult to figure out when the dough has doubled. It is often a lot less than what one would think. You need use the poke test to see when your dough is ready to bake rather than using volume or time until you get more experience on what a dough looks like when it has doubled. That being said, for best oven spring, you need to bake before the dough has fully doubled.

I think we can build upon your prior baking experience and get you up and running.

The most important part of sourdough baking has got to be the starter. Before we begin baking bread, lets make sure your starter is ready to raise your bread. I noticed that you referred to both grams and ounces. It will make things easier if you start thinking in grams. And since you mentioned grams I‘d imagine you have a digital scale.

In order to test the vigor of your starter, you can remove 20 grams from your present starter and mix with it 20 grams of water and 20 grams of flour. Equal weights of water and flour make a starter that is 100% hydrated.  Put it in a smooth sided clear glass and cover it with plastic wrap and seal that with a rubber band. Mark the level of the mix on your glass. Keep it in a warm place, like on top of your refrigerator. Every hour or two (if you have time) mark the level of the starter and the time. Let us know how long it takes to double. Also, if you can let us know when the starter reaches its highest level. When it does reach the high mark, remove all of the stater except 20g. Then again feed 20g water and 20g flour to that portion of starter.

Send us the information and we can suggest the next step. If your starter is ready, you’ll be baking bread in short order.

I know we can help.

Oh, if you are using all or large portions of fresh ground whole grains it can make baking a light loaf more difficult. Definitely not imposible, just different.