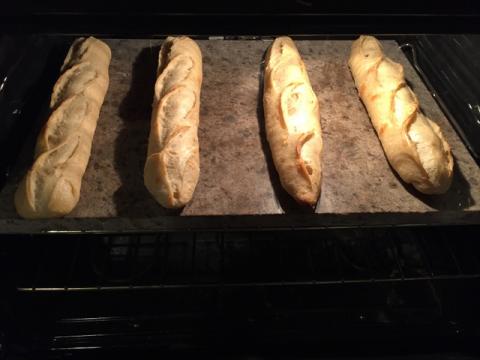 The video below is my step by step journey in baking Maurizio Leo’s Levain Baguettes.  It is self explanatory with almost all steps included.  However, I eliminated the levain build and final mixing of ingredients as I’ll take a guess that there are some somnambulists on TFL just looking for a good video to ease them into Dream Land.  Please watch and hopefully you will enjoy the video as well as the voiceover.

Thanks for posting this, which was very informative.  Sort of like being in a baking class.  Did the second batch have a better rise (i.e., not as flat) in the oven?  I also wondered whether the humidity might have changed in your kitchen between the first and second batches.  Dropping the hydration seems to have worked (and perhaps having some experience with this particular dough helped too),  You certainly have a great amount of knowledge and expertise when it comes to baguettes.

Yes, the second batch had a fairly "normal" rise, although it could have been a bit more "robust".  However no complaints here.

I live in So FL, and it being summer now (as well as quasi summer here the rest of the year too) the humidity and heat have us keep our windows closed and A/C pumping all the time.  The apartment is at a constant 77-80 and the humidity remains around 75% indoors here almost all the time - especially at this time of year.  So I've never noticed the humidity changes having an effect on the outcome.

I'd like to push the hydration up a few percent again now that I have a trick or five under my belt with this dough. And this dough is definitely a keeper.

Thanks for the kind words, alan.

BTW, if your Watertown is in Mass, one of our TFL contributors in the past is Varda, whose small brick and mortar wholesale bakery is in Waltham.  She only sells wholesale and you can find her breads at these locations if you care to look.

Thanks Alan! That was great. Your video was very informative and well done.

A couple of questions.

1 - Why is the crumb coming out yellowish, like semolina? Mine did the same.

2 - I noticed that your crumb on both loaves had very nice holes in the middle, but denser crumb near the crust. Again, mine came out like yours. I thought I might be shaping too tight or sealing the dough too aggressively.

I lied. Last question, What software do younuse to edit your video? You always produce such professional videos.

#1. If you are familiar with the differences between short, improved and intensive mixes then what we do by hand could be considered a short mix.  According to Michel Suas in his book Advanced Bread and Pastry, "a short mix creates almost no oxidation resulting in a very creamy crumb color".  Most of our doughs have other grains in them, and this may well mask the coloration.  It is the oxidation from overmixing that "bleaches" out the creamy color.  At least that's my best answer at this moment!

#2. I try to not shape too tightly, and as David Snyder has said and I've mimicked on TFL, shaping requires an iron fist inside of a velvet glove.  It's that fine line between not enough and too much tension across the exterior of the dough surface.  I've long since lost my being enamored with vast stretches of air pockets in open crumb breads, so I rarely ever try to hit that mark.  Maybe I need get a little more practice in on this.  Either way, this formula and bread goes into my looseleaf folder for rotation.  Thanks for posting it.

the lie.  I use iMovie on my Apple MacBook Air.  I've done so few and then so far between, that I have to continually rely on YouTube instructional videos to relearn the basics all over again.  It was pretty frustrating trying to make it do what I wanted until I figured out how, but also a "fun" learning process.

I already commented in the community bake but just wanted to say again what a great bake and thank you for sharing!

Your slap and folds look like Mr. Bertinet himself and it certainly makes for an amazing looking dough! So smoooooth!

I am also amazed at the scoring as you did not chill the dough but moved through effortlessly whereas I drag myself through it....

What do you think caused the stickiness in the first batch...my dough today was stickier than the previous ones and I was wondering whether I should have let the cold bulk go on for a bit longer or the warm bulk?

I learned that method from the "over-long", over-talky video posted by Babette. Here is the English language voiceover version.  Aside from learning the technique from her before I ever saw the M. Bertinet video, I think that she is cute and liked watching her anyway ;-) .

As far as scoring, I pulled the tray with my couche out of the refrigerator at the same time that I placed the first of my two steam "engines" into the oven (Sylvia's Steaming Towel).  The dough certainly had not come back to room temperature, but had just started to lose its true chill.  I basically "never" proof my dough on the countertop after a retard and before baking.  So I also never bother to do the finger poke test either.  Seems to work okay for me.

This dough, as with its IDY counterpart - the Bouabsa baguette dough, seems to be designed to have a short bulk rise at room temp. and a very long nap in retard, hence the low percentage of IDY in one and low percentage of pre-fermented flour in the other.

I'll take a pair of guesses as to the sticky quality of the dough on the first run.  Unfamiliarity coupled with the higher percentage hydration.  The other is that I relied on my well-worn 10 minute pre-shape rest on the first run, and expanded that to 30 minutes on the second run.  And thereby violated my personal rule of changing only one parameter at a time to observe what difference that ONE thing makes.  Oh well...

If I were a betting man, I'd put my money on the longer bench rest.

If Lucy could make Bggies like those we might make and eat them more.  Nice video and happy baking Alan.

is to use your fingers and hands, two appendages that Lucy and Castagna are sorely lacking.  In fact Castagna has never shown any interest in learning to bake herself.  She just wants the finished product.  What a dog!

Sometimes when we are about to shut the door on the way out, and we leave the pooch standing there staring at us incredulous that we'd have audacity to leave her, I remind her "to write us if you ever grow fingers".  I don't think that she really ever caught on to that one.  Most of the time she is deep in dreamland and likely has no clue when we come and go.  She's working on 16 so she has earned the right to sleep all she wants.

but she will get there.  You should see Lucy type these posts.  4 paws a goin' and fur a flyin'.  300 words a minute easy with only 100 errors.   It would help if she knew less Swedish and more English though.  My wife always wants to put Lucy in the kennel when we go out and I'm always trying to sneak her out of it before we go.  I worry that if the house caught fire she would be toast and could at least escape out the doggie door to the back yard.  I also want her to attack anyone who breaks in too.

Tuck the old lady into a soft warm spot for Lucy.

and so funny that so many of us all have dogs here on TFL...We should collect photos and put them all together and then one day to this owner /dog thing...that would be hilarious..... Kat

Its so nice to see how you make your beautiful baguettes.

I usually shun being a participant in any type of "competition", friendly community bake or otherwise.  But this one was a little too enticing.   Happy to share my way of doing them.  The last time was years ago with the Bouabsa baguettes.  And yes, I agree that the second batch looks like my baguettes.

Thanks for posting that video, Alfanso! Looks like that second go, at lower hydration, was the ticket. Really nice scoring and crust coloring as well. Hydration is always such a tricky thing, and in my experience it really shows with baguettes.

I'd also be curious, have you tried pushing your bulk fermentation and/or proof a bit longer with this dough? I wonder if that would result in a more uniformly open interior and perhaps an even more tender result as well.

All in all, nice work and thanks for posting your results!

On both runs I used a similar flour protein profile as you outline.  My mix was KA AP flour and Gold Medal Better for Bread..  So I wouldn't expect a much different issue with hydration than what I experienced vs. what you posted.

My kitchen maintains a similar constant temperature as your stated ~78degrees.  So while the TFL mantra is "watch the dough and not the clock", mine is just the opposite once I have an understanding of what to expect from a dough.  So, no, as I've only made it these two consecutive times, I wasn't ready to consider other options.  Next time, I may take the dough out of retard a half hour before bake instead of the 15 minutes that I did on the second run.  And see what that does.  Also, I anticipate that my kitchen in So FL, even with the A/C running regularly, has a higher humidity than your desert environment kitchen does.

As mentioned, I infrequently have an issue with hydrations into the mid-70s for baguettes, a tough sell north of that unless there is a lot of whole grain.  So, for example, when taking one of Ken Forkish's 78% hydration formulae, I'll rework it down to ~75% for baguettes.  Or in the case of your 50-50 WW Levain, 87% was too rich for my blood as a baguette, so I dropped it down to 82% and they came out dandy.

As an aside, I'm into finding an interesting dough posted as a batard or boule and turning them into baguettes.  I'll always run a google search to see whether I can find if anyone had posted a formula as a baguette - and think "oh darn" if they had.  It's all for my own entertainment anyway.

PS. My brother lives in ABQ (up the hill from Tramway, east of I-25 after the casino).  And I make it out there occasionally.   Next time I do, I might ask if it is okay to ring you up.  Va bene?

Yes, your high humidity (definitely higher than here in New Mexico) will certainly change things up for you. It sounds like you have a firm grip on your environment and flour, though, so you know what to expect.

Generally I've found many of my own recipes I shape as a batard work well for a baguette, I just have to drop the hydration down by around 8-10%. The increased handling, transferring, and scoring of a super wet baguette dough will make me sweat, even in the early morning. It's just stressful! So perhaps if you find a good recipe, drop the hydro and see how it works out for ya, it has for me!

Very cool to hear you come out this way occasionally. Yes, shoot me over an email next time your in ABQ and we can grab some coffee!