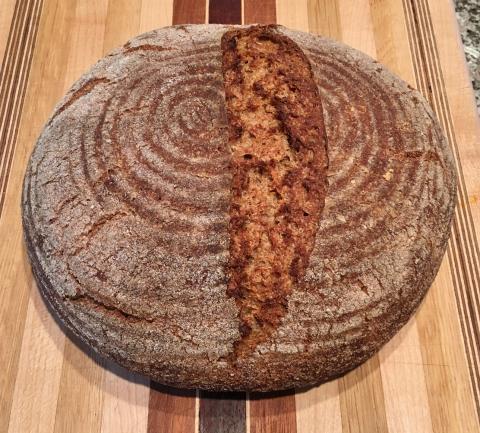 A few weeks ago, someone posted about a rye bread, and David Snyder referenced a recipe for Hansjoakim's 70% Sourdough Rye.  Having dabbled a bit with whole rye flour (as in Field Blend #2 from FWSY), but never having plunged deeply into that area, I decided to give it a go. Especially because the recipe sounded relatively simple and straightforward.

If you are looking for a bread with a nice rye flavor and texture, try this one.  Thanks, David!

First I needed to create a rye starter, but that was easy.  As David indicated in the other thread, one feed of rye to my regular starter (typically fed with a 50/50 mix of AP and whole wheat) was enough.  At 7:55, am I mixed 15 g of my regular starter with 50 g of whole rye and 50 g of water.  Opting to bake two loaves, I created one rye sour final build at 5:30 pm and the other at 6:20 pm so as to stagger the bakes the following day.

If you think that you need a lot of starter, consider these photos.  A piddly 11 g of starter combined with 218 g of whole rye and 218 g of water.  The middle picture is right after mixing the build, and the picture on the right is from the next morning.  Sure surprised me.

I chose to use my KitchenAid mixer.  Everything goes in at once for three minutes with the paddle and then three minutes with the dough hook.  The mixture tended to cling to the paddle, but not so much to the dough hook.  (Forget about those admonitions with wheat flours to mix until the dough leaves the sides of the bowl.  This rye dough ain't leaving nothing.)  As David mentioned, the mix "at this point is a thick paste with little strength."  Certainly unlike any dough I had worked with before.

Did I hear anyone asking for a quick bake?  There are no stretch-and-fold sessions.  Simply transfer the dough to an oiled bowl and cover it for an hour.  That's the entire bulk fermentation.  Pre-shape (to the extent possible -- this stuff feels more like a pile of mashed potatoes), bench rest for a whole five minutes, and then final shape (again not so easy, but I did manage a sort of Tartine-type package) and into a banneton.

The recipe calls for a two hour final proofing, but this stuff rises swiftly (even Field Blend #2 with its commercial yeast supplementing the sourdough starter is nowhere near as fast to rise).  My kitchen was about 80F, and taking David's advice to heart (his kitchen was a similar temperature according to his write-up), I shortened the period to about an hour-and-forty-five minutes.  In retrospect (note to self for the next bake), with a kitchen that warm, I would consider an even shorter final proofing.  Here are the before and after (just into the banneton and just before coming out). 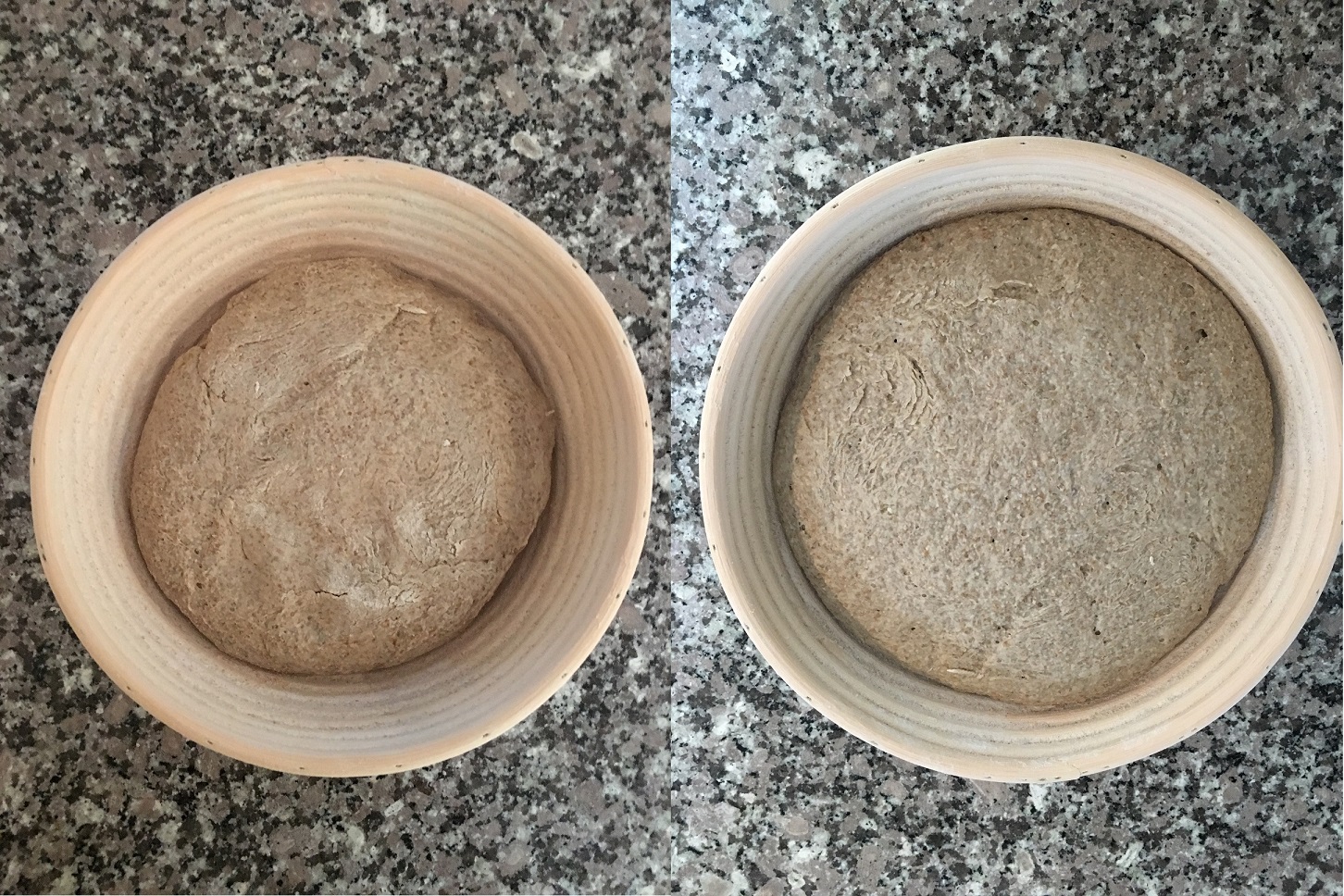 The bake went as David described, with an initial temperature of 480 being dropped to 440 and then 420 and then 400.  I too did not get much oven spring, and I attribute that to leaving the dough too long in the banneton.  (The loaf with the slightly greater oven spring is a gift for someone else, and that loaf proofed a shade less time.  Maybe I will see the crumb.)  The bread has a great rye flavor, however, with a nice chewy crust and a crumb that is both soft and dense. 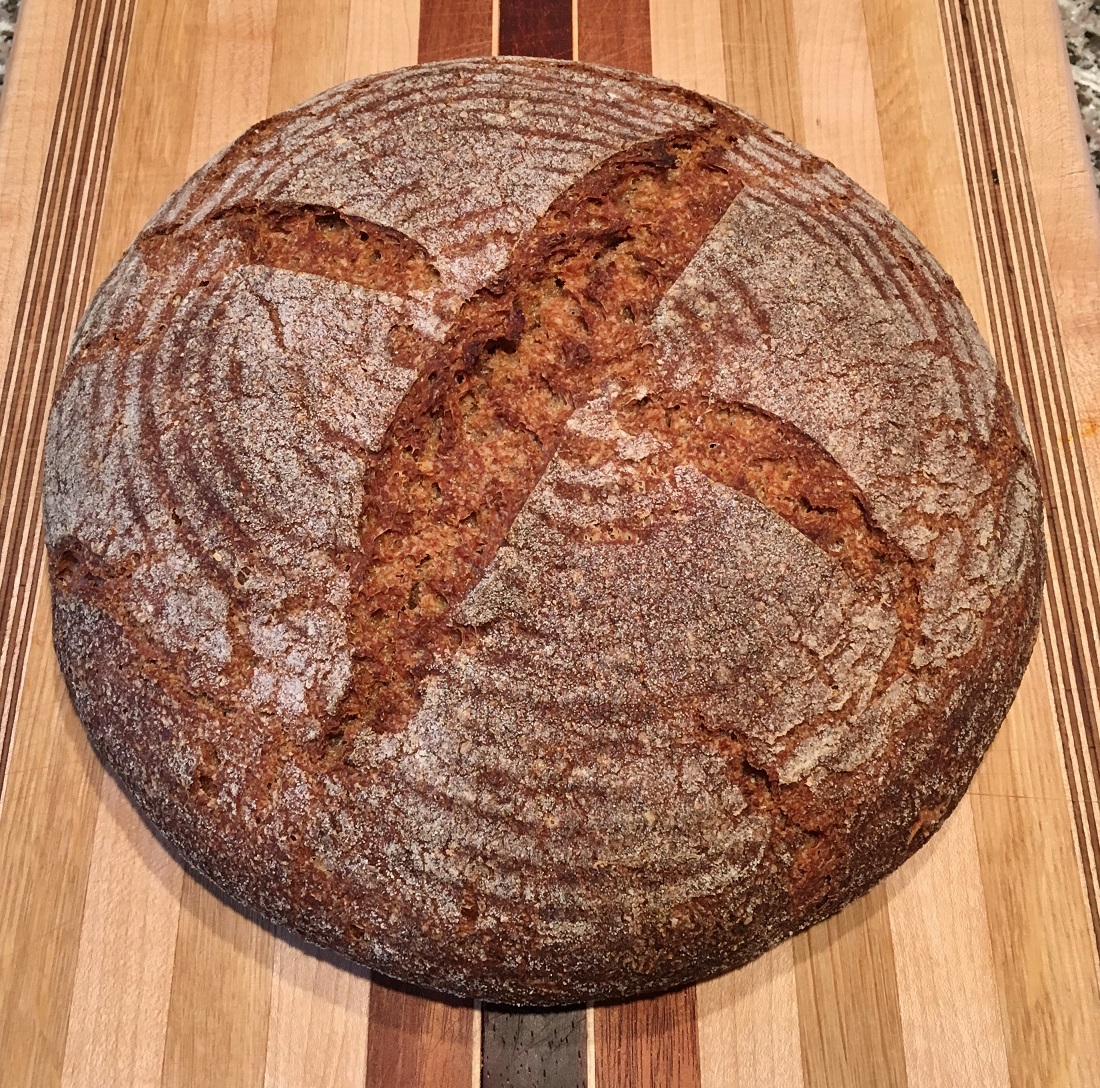 Starting at 8:00 am, I had the first loaf out of the oven a pinch after noon.  Although the recipe cites medium rye, I used whole rye to capture as much rye flavor as possible.  This is definitely a bake that I will do again.

Even with the less than optimal oven spring, it still turned out wonderful!

Thanks for your very nice compliment.  If you like rye bread, or want to try rye with a simple approach, this is a good place to start.

amount of rye bread and I would love to put my teeth into this lovely looking loaf!  Kat

Hi Kat -- Thanks for the comparison to your European experiences.  It is a bit different to sink my teeth into this bread after being used to breads that have a more airy look and contain high percentages of all-purpose and bread flour.  This was a real change of pace and one that I am enjoying.

This needs to go in the oven at 85% proof not 92.5%:-)  I prefer it proved seam side down and baked unslashed like the one below and Adri's Westphalian Rye.  Has to taste great at  70% rye,  Need some cured and smoked meats for ot to!  Nicely done and

Knowing that Lucy edits all of your comments, I include her in my thanks.  Your suggestions sound great, and the link to another of Hansjoakim's posts illustrates your point too.  This bread does go well with all kinds of things.  By itself it has a great rye taste, and along with other things the blends are wicked good.

Which I have now fixed

Do you think that the volume just before I took the dough out (i.e., the "after" photo) represents the right amount of dough to put into the banneton?  And then the dough could fill the banneton to the rim during the final proofing?

I could always scale up and give that a try.

which makes it spread after coming out of the basket and give it a weird cross section but some of that what over proofing too.    I also think David is spot on. This is a 70% rye bread and 85% proof that I was thinking s too much. That would be right for 70% whole wheat bread.   75% would be better so we all agree your did overproof but not much time wise.  It doesn't take much for rye to be a spreader.

If the after amount picture was the before amount picture it would be much better and fill the basket better.  If the bread is too big just cut i in half and freeze it,  This bread freezes exceptionally well.

I'm glad you liked this bread. It's one of my favorites. I particularly like it with smoked or pickled fish.

Make it again. You will get a feel for when it's ready to bake. I do think you may have over-proofed it. Easy to do with high-rye breads. Yeast loves rye, especially whole grain rye. And since it doesn't rise the what mostly wheat flour doughs do, proofing is harder to judge.

For the weight of dough in the formula I posted, I use a 10" brotform.

David, many thanks for your comments.  This bread definitely would pair well with smoked fish, and the next time I bake it there will be some planning ahead of time for accompaniments.

My first experience with a high-percentage rye bread seems to have gone fairly well, although the shaping and proofing challenged me a bit.  It is funny that Dab thinks the banneton is too small, and you use a 10" brotform.  I measured mine, and the outside diameter of the one pictured is 9".  As a friend of mine used to say, "Go figure."  The next time I think I will scale up the ingredients slightly and definitely go for a shorter proofing time.

I have such a soft spot for rye, I try and sneak it into all my loaves! High rye's are just delicious and yours looks great. how long did wait before slicing?

Thanks for your comments.  I too like a bit of rye in recipes, which is probably one of the attractions for me of Field Blend #2.  In that case, however, it is a taste of rye, and here it is full-blown rye.  If you want a good strong rye flavor, and an easy and fairly quick bake too, this is the one.

I did not wait a full twenty-four hours to slice.  More like four hours.  But the texture remained pretty much the same for the next three days until finally the loaf was consumed.