From Jeffrey Hamelman's Bread: A Baker's Book of Techniques and Recipes, this was my first attempt at this recipe, and a first use of a metal bowl covering the bread for an initial period during the bake. Up 'til now, I've used a cast iron pan under my American Metalcraft baking stone, into which I"d pour hot water to generate steam.  This method has worked quite well for me, but I've been wanting to try another technique short of getting a dutch oven.  I had had a discussion with a friend's husband, who owns a bakery and who urged me to try the bowl to capture steam.  I picked up a metal bowl at Big Lots for $9 that's just under the width of my stone.

The loaves were covered for the first 17 minutes of the bake. I must say, I was kind of gobsmacked at the difference it made - waaaay more spring (and I've been getting pretty good oven-spring), and the crust has a "more crunchy/crispy, less chewey" texture.  I am super-excited about this.

BTW, the bread tastes amazing, with a wonderfully subtle sourness and lots of body from toasted sunflower and sesame seeds and soaked flax seeds.  Bread was cold retarded for eight hours. 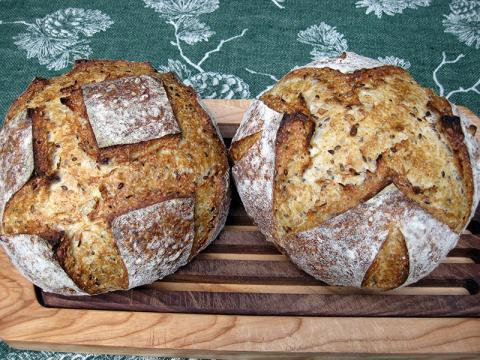 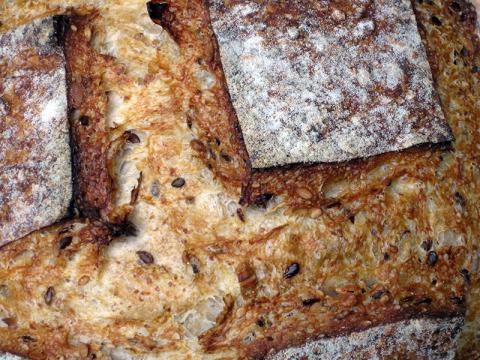 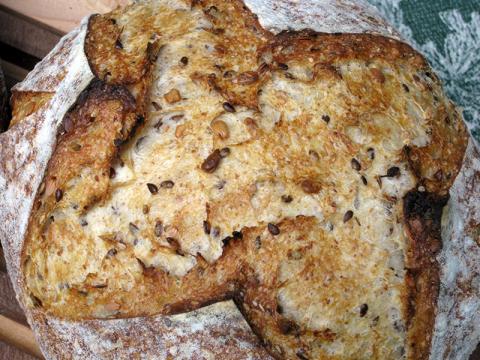 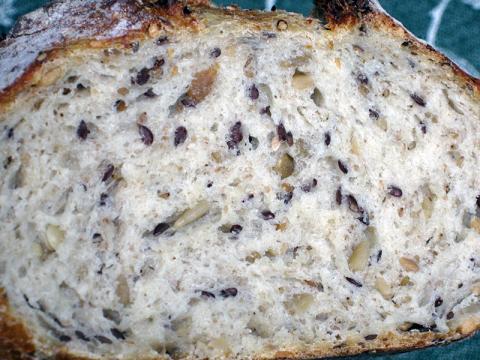 That's a really nice loaf of bread.  To clarify, did you used to use a lodge pan to cook bread?

No, I had been using a Lodge cast iron skillet under my baking stone, but only to pour hot water into to generate steam at the beginning of the bake.  With the bowl method, bread goes directly on the stone, then is covered with the bowl, which sits flush against the stone.  The bowls is removed after a period of time (which I"m sure I'll experiment with), and the bread stays uncovered for the remainder of the bake.  The skillet is done away with completely.  These loaves baked for about 40 minutes.

... and I am sure they will taste just that. Both crumb and crust look like some fine filigree art!

Enjoy them, they're beauties.

Classic and great looking loaves.. they must taste as good as they look! Well done..

A great example of a great bread.  Well done!

Really fine work!  Hamelman has so many great recipes.