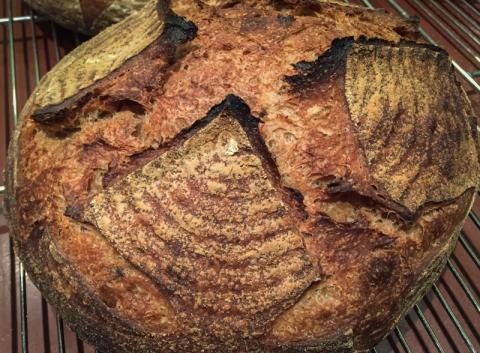 First a shout out to JustJoel whose post lit a fire under me to get this post finished!

A few years I visited Puglia (Apulia) in Southern Italy, where I was introduced to grano arso.  Translated as "burnt wheat," it is the flour made from the few grain kernels remaining after the farmers burned the stalks in the fields but before they were plowed under to prepare for a new planting. The poor workers would collect these grains and use them to supplement their already meager subsistence by incorporating them into pasta and bread products. I was able to find and bring home a small amount of grano arso semola which was made from durum wheat. I used it in making some very good pasta, but did not have enough for bread. I tried to reproduce the flavor by roasting some extra fancy durum flour in a smoker for several hours. It worked, kinda sorta.

Fast forward to couple of weeks ago when I saw this article that rekindled my interest. The difference between now and a few years ago is that I have acquired a grain mill in the interim, so now I could roast whole berries and then mill them, which makes the process much more like the original.  I experimented with a couple of bread bakes using Italian emmer wheat (farro medio), which I had on hand (and I think is more flavorful than the hard white or red varieties of wheat berries).

Preparing the burnt wheat was a fairly straightforward process. I placed the berries in a single layer on a cookie sheet into an oven heated to 375˚F for 13-18 min.  The berries darkened considerably and started to smoke after around 10 min. I called them done when they were a light chestnut color, though I believe I could have roasted them even darker for more flavor. They were milled finely in a single pass using a Mockmill. The grains lost about 11% of their starting weight after roasting, probably mostly the loss of water from within the grain.

I assumed that the roasting process would destroy the glutens, so most of the flour was white and whole wheat with the grano arso contributing only to the taste and presumably not to the structure or texture.  I blended in about 13% of the total flour weight for the first bake.  The grano arso was also quite thirsty, so I kept adding water until it "felt right" and I reached almost 100% hydration. In retrospect, this was a bit too much water and although the gluten developed quite well and the crumb was very open, the loaf was a bit flatter than I had hoped.

This is what the first loaves and crumb looked like.  The crumb was extremely creamy, as you would expect with such a high hydration. The crust was good but softened fairly quickly. The taste of the grano arso was immediately apparent, not unlike burned popcorn, but in a nice way. In the crumb shot there are black specks that I believe are from the grano arso.  The loaf was very tasty, but I think the grano arso was a little too much and the sweetness of the other grains was overpowered. But I do love the rich coffee color the grano arso brings to the loaves. 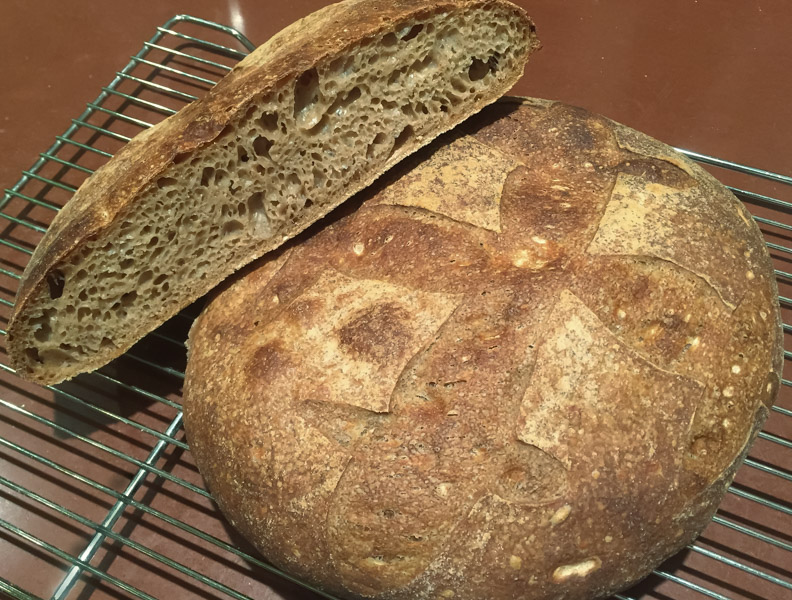 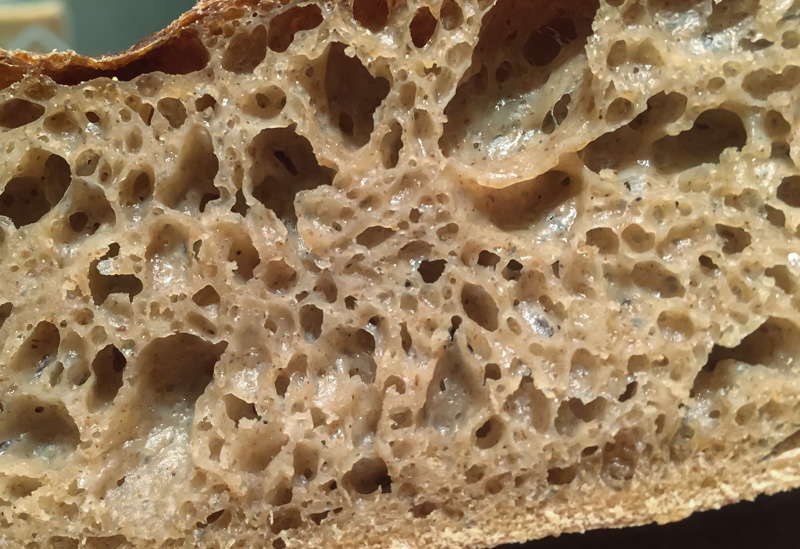 For the next attempt I reduced the hydration a bit and also reduced the grano arso to under 8% to make the flavor a bit more in the background. This worked flavor-wise: the burnt flavor was more subtle so it paired well with more foods. I kept the salt low for these first bakes, but I think the grano arso can take a fair amount of salt, maybe up to 2.5%.

I used a lower hydration because of the reduced grano arso, but I think I went a bit too far in the opposite direction.  The gluten was well developed but the crumb structure was not quite so open. I think between the two bakes I've seen the upper and lower limits of hydration, so the next bake will be somewhere in the middle.

The two loaves on the left of this photo are made with grano arso. The other two are basically the same formula using einkorn flour that I made in case the first ones didn't work out. 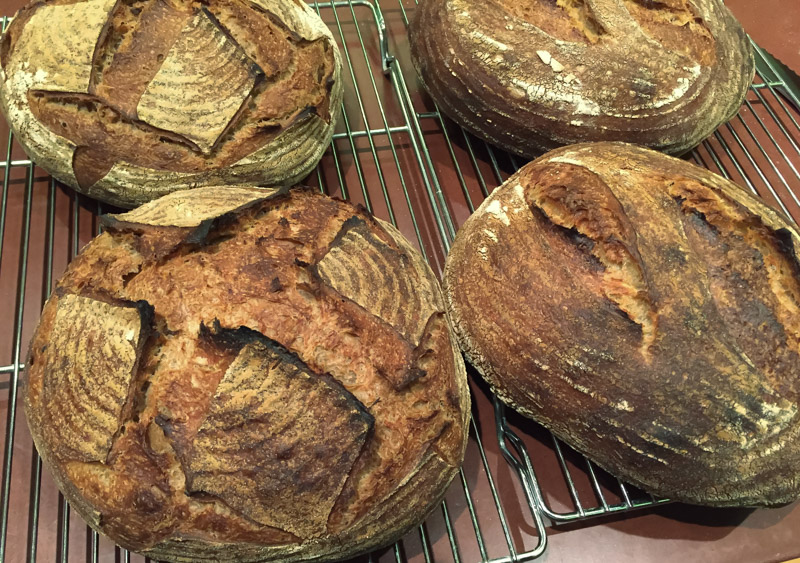 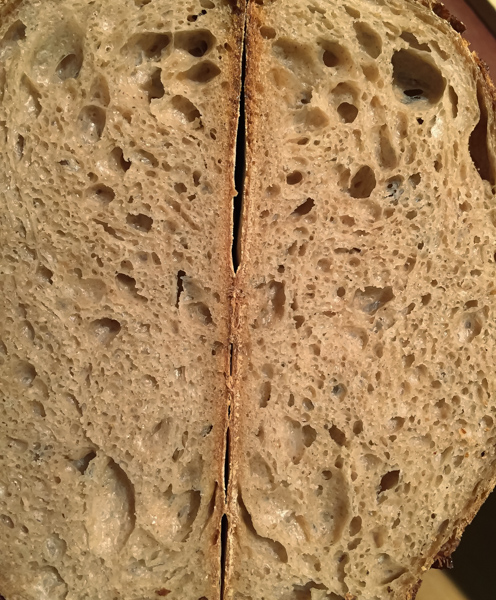 There is a huge flavor range to explore here - different grains, different roasting times, different percentages depending on what it will be served with. I look forward to the challenge.

Love the whole story of the origination of the burned wheat. Made me a little teary to think of them harvesting these few grains when the good wheat went to the ones that did no work. I believe there is a bit of the Little Red Hen in this story . Anyway great job and I think the crumb is wonderful. I don't like lots of large holes...where is the filling supposed to go ? :) all over your hands and plate and floor and ....

I have chestnut flour that was ground from chestnuts  roasted over open fires in Italy. It is from 2007 !  I have stored it very carefully in its sealed airtight bags in the freezer and use it sparingly. It is an acquired taste due to the roasting process.

I shall try roasting some whole grains and see what I get. So glad you posted. c

I do think you are right that the story is somewhat apocryphal, but behind every tale isn't there a grain of truth (no pun intended)?

Your chestnut flour sounds great, too.  I've had a recipe for bread using chestnut flour put away in my files for a long time but never seem to get to it. So many breads, so little time...

I learned a lot from your post. We toast all kinds of seeds to go into bread, why not toast the grain itself! I am curious though about the gluten being destroyed by roasting. Can you expand in that?

By the way, your loaves and your crumb are gorgeous! Well done!

I appreciate your kind comments.  It is just an educated guess that the glutens are destroyed based on the fact that glutens are proteins and proteins become denatured at high temperatures. Denaturing changes the chemical structure and the way the molecules bond with other molecules, so the ability to form the long chains we know and exploit in our breadmaking goes away. Hope that helps.

by warming the flour. I have all my flour in the cold...used to be the freezer but now it is in the mud room for the winter at this new to us house. Anyway a number of years ago I was in a hurry and warmed my flour in the microwave !  Ackkk...it got pretty warm but I quick mixed it with cold flour. Well the bread didn't turn out and it was a recipe I used all the time. My chemist husband said it was the overheating of the flour. I think that he was right. So if we toast the grains it will have to be held up by a high gluten flour and used proportionately or we will end up with pancakes :)

...for corroborating my theory with hands on data.

is that all the amylase enzymes that break protein bonds that break starch down into the sugars that the wee beasties eat are also denatured since they are amino acids and also proteins.  Protease is also not going to break the protein bonds to make the dough more extensible.  So all the work is being done by the non roasted grains and the roasted ones are for flavor.  Things turned out pretty well so no harm no foul.

The roasted grains are a pretty small percentage of the overall flour, so there was probably enough enzymes from the rest of the flour to to their thing.

seeds and nuts etc. that should work. As far as hands off I am going to reduce even more! Soon bread will make itself