Why is the bottom of my bread burning in Dutch oven?

Why is the bottom of my bread burning in Dutch oven?

New baker who received both a Dutch oven and FWSY for Christmas. I’ve made theee amazing loaves that have come out beautifully and tasted wonderful....except for one thing: the bottom. The first loaf I put directly into the Dutch oven per Ken Forkish’s instructions and it stuck to the bottom and burned like charcoal. The second loaf I put parchment in the bottom which prevented the sticking as well as putting a cookie sheet on the wrack below the Dutch oven to try and dissipate some of the direct heat from reaching the bottom of the Dutch oven. I bought an oven thermometer and am baking at the correct temperature.

Any tips? It’s a shame that these breads are coming out so beautiful and tasty on top but inedible on the bottom. Could it be because the Dutch oven is brand new?

Hm, did it arrive pre-seasoned, and how have you treated it before/after baking?

The first time I used my lodge pre-seasoned dutch oven, nothing stuck, it was great.  I remember one or two of the early loafs had very dark bottoms and one stuck.  But I haven't had issues since I've got into the swing of handling it.

i.e., after use, I pour some water into the hot iron and let it steam a little, scrape whatever's in there with a metal spatula if necessary maybe something could use some help to come up, but usually nothing sticks; then I just dump the hot water and wipe it with a paper towel, then I put some vegetable oil on a paper-towel and give it another wipe while it's hot.

The time early on when something really stuck, I made a point to give a good wipe-down with vegetable oil and cook around 450F or 500F with the lid on for about 15-20 minutes or so, and that helped recover the seasoning on the area where the stuck bread happened.  Smoked the oil a little but no smoke detector issues.

I've found for my sourdough boules, leaving the temperature high the whole time tends to over-darkening the bottom, so to adjust, I only keep it very high (over 450F) those first 10 minutes for oven-spring, then bring it down for the rest.

Thanks for the feedback. No, it wasn’t pre-seasoned and I’ve never owned a DO before. Now I know to season with oil between use.

When you reduce your temp for the remainer of the bake, after the oven spring, do you continue to keep the lid on?

or do you have an enameled cast iron Dutch oven? The plain cast iron ones need to be seasoned, not the enameled ones. I put a round of parchment paper in the bottom of my enameled ones. And the rounds are reusable!

First, I echo the preceding set of comments.  Your Dutch oven needs some oil on a regular basis (not a lot of oil, in fact only a tiny coating).  One thing I always do is sprinkle semolina flour on the bottom of the Dutch oven before inserting the dough. I bake FWSY recipes as well as others and have never had a problem with sticking while using the semolina.  One more thought -- do you have the bottom of the Dutch oven about in the middle of the oven?  If you have it too low, it could be picking up too much heat from the heating element in the bottom of your oven.

I had no idea I needed to be seasoning the bottom, thanks for that info. I will also be buying semolina flour and use it every time. Thanks again!

which is what I tend to use. As a small side benefit, I end up with a bit of toasted cornmeal each time that I collect and use as an add-in.

I have an oven that burns things on the bottom all the time yet is still within specs for temp. It took a while to diagnose and couldn't have done it without my talented SO but we finally figured it out.

All ovens have a range that they operate in and a 35 degree swing is considered quite normal. So if you set it at 400F, it could range 35degrees around 400-ideally 400 being in the middle-so from 380F-415F. Since most situations aren't ideal, it could be 370-405 or even 399-435. However, the range was not the only problem with my stove. The reason my bread would burn on the bottom was that when the oven temp dropped to the point that it turned the element on to raise the temp, it came on screaming hot and raised the temp very quickly. It did this every time it cycled. It was equivalent to briefly blowtorching the bottom of the pan each time it came on.Things were better if I raised the shelf higher in the oven away from that element. So now I have a 1 shelf oven that doesn't burn bottoms but still seems to dry things out. We are installing a PID controller (bypassing the controls) that should help.

Another issue we discovered was that most oven thermometers (we tried 4) are horribly inaccurate compared to a lab-grade thermosensor. It was a tedious process monitoring an oven for temperature over a few hours. It will be interesting to see if the new controller makes a difference.

I also wondered how accurate the $8 oven thermometer is. Hmm, I’d be interested to see what your new gadget finds out.

by using convection mode. Normally, this is used for cooking uncovered food more quickly but with my Dutch ovens, it circulates the heat and help prevent hot spots. I still have one spot on the bottom that will cause a burnt crust so I know not to put a pot there.

By the way, I do 6 loaves at once, 3 on the upper rack and 3 on the bottom rack which is place about one inch from the floor of the oven (my bottom element is hidden under the floor). About half way through, when I take off the lids, I rotate the pots. This works well.

This is actually a common complaint. And you only need to season your Dutch Oven if it's "naked" cast iron, not if it's enameled cast iron.

I had that issue as well. You can turn the heat down. There are also lots of outfits that say you don't need to preheat the cast iron and you will still get the same oven spring. There are different camps on this, but that camp doesn't seem to have the problem with burned bottoms.

One thing I did was put a pizza stone on the bottom rack and put the D.O on the highest rack that would still allow it to fit. Then I put course cornmeal on the bottom of my D.O. and turned down the heat 25F.

You just have to finagle with it until you make it work for you. Happens to lots of folks (not everyone) and it's one of the inherent flaws of the method.

I have a 6 quart enamel dutch oven (by the Food Network). I have the wrack just below middle. I could potentially put it up one more notch before it starts to touch the top of the oven.

Raising it up is worth a try.

I use both black cast iron and enameled cast iron pots, on two shelves like Danni does (only I do up to eight at a time). I pre-heat the pots in the oven to 475F, then take them out and load the bread (I put each loaf on a piece of parchment paper then use that as a sling to lower the loaf into the hot pot). I then put the lids back on and load them all into the oven, and immediately turn the oven down to 450F. That stops the elements from coming back on to get the oven back up to temperature. After 25-30 minutes (depending on the size of the loaves) I remove the lids, rotate the pots and then turn the oven down again to 425F for the rest of the bake. Again, that stops the elements from coming on after the oven door has been open for a bit. Nothing ever sticks and no burnt bottoms. And I have also never oiled the plain black cast iron pots as then they smoke next time I pre-heat them. Makes the bread taste funny. :)

Today my first loaf got a bit scorched on the bottom so I put two cookie sheets on the bottom rack and that helped for the second one. I use parchment paper as well. But I think using a lower temperature is a good idea. I debated about putting on the convection feature but wasn’t sure about that. My oven is gas so it would be an experiment I’m not sure about risking.

I used my calphalon dutch oven but I have a Straub one I just bought. It’s enameled cast iron so I’ll try it next bake.

My bread would burn on the bottom before I got an acceptable crust development.  I found that the radiant heat at the bottom of my Oven was way hotter than the ambient heat inside the oven cavity.  I tried several options to try and overcome this high radiant heat.  Everything I tried, pizza stone, dutch oven and even a baking steel, all burned the bottom crust of the bread.  To overcome the High radiant heat, I placed the baking steel at the bottom of the oven and bake the bread inside a dutch oven.  I still get a darker bottom crust but no longer burns.  The Baking Steel absorbs a lot of the radiant heat and gives it back to the oven cavity more evenly.

My current configuration, Baking Steel (or some large Heat Sink, bricks, Pizza Stone etc) on the very bottom of the oven and the Dutch Oven in the center of the oven.  I pre-heat the oven for 1 hour to 430 degrees.  When the hour is up, I put the bread inside the dutch oven and bake covered for 30 minutes at 420.  After the 30 minutes, I bake for 20 more minutes uncovered or when the crust is ready.

... an option worth trying is to use a gas hob heat diffuser; it certainly works for me when I require a gentle heat for sautéing onions, etc. 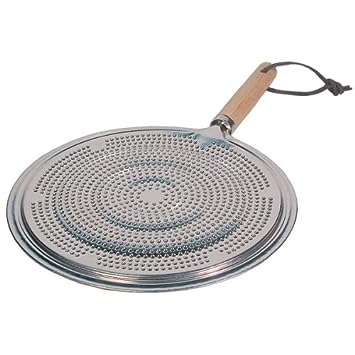