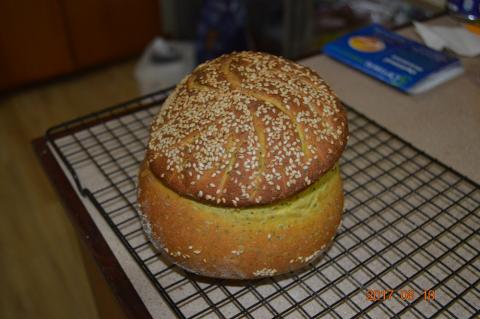 I made some bread today to give away as a thankyou to some one that belongs to the local facebook "available for Barter" group its an Orange and Poppyseed loaf. its the first time i've made it and was quite pleased with the result the smaller loaf was for us and the other for giving away. 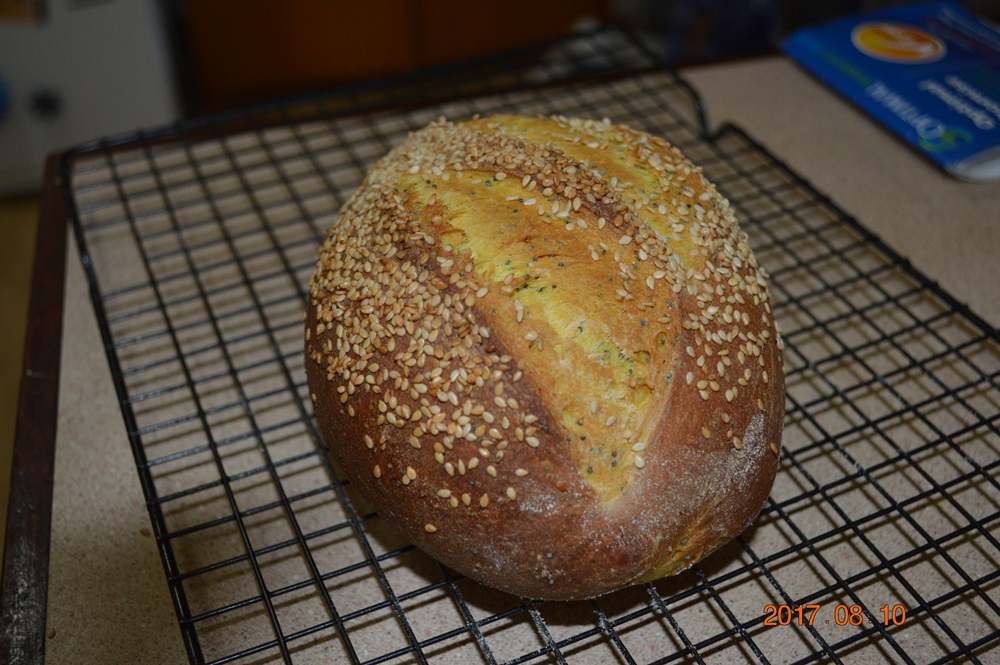 the dough was a 3 hour dough 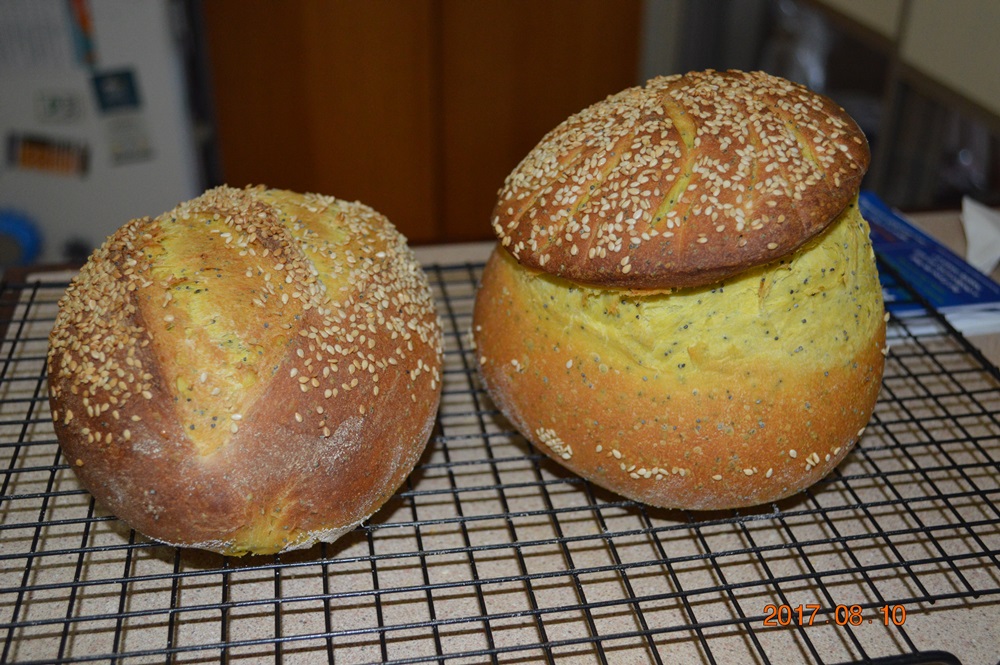 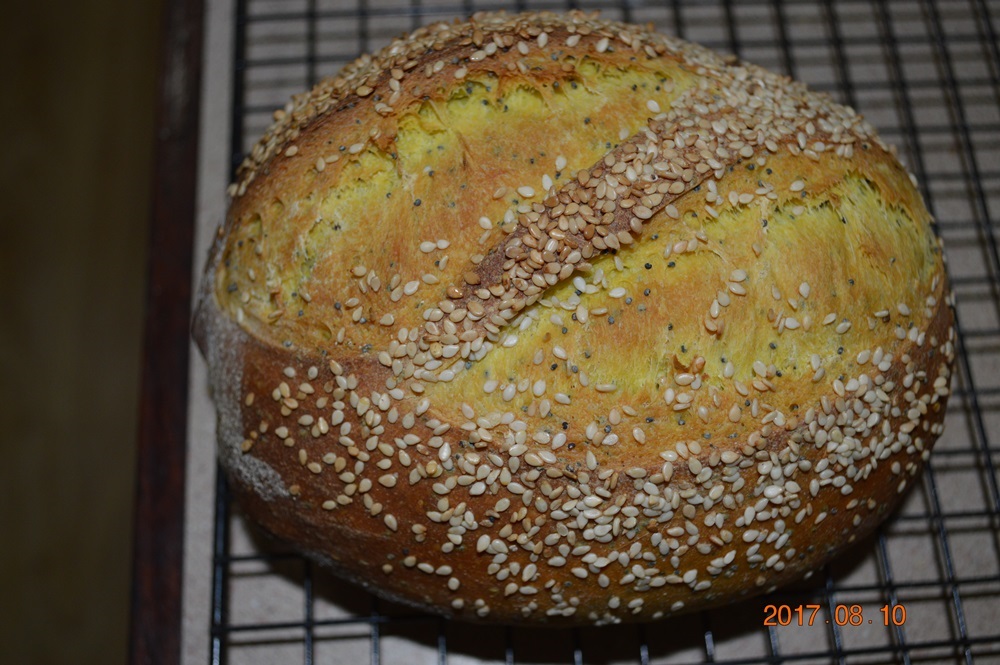 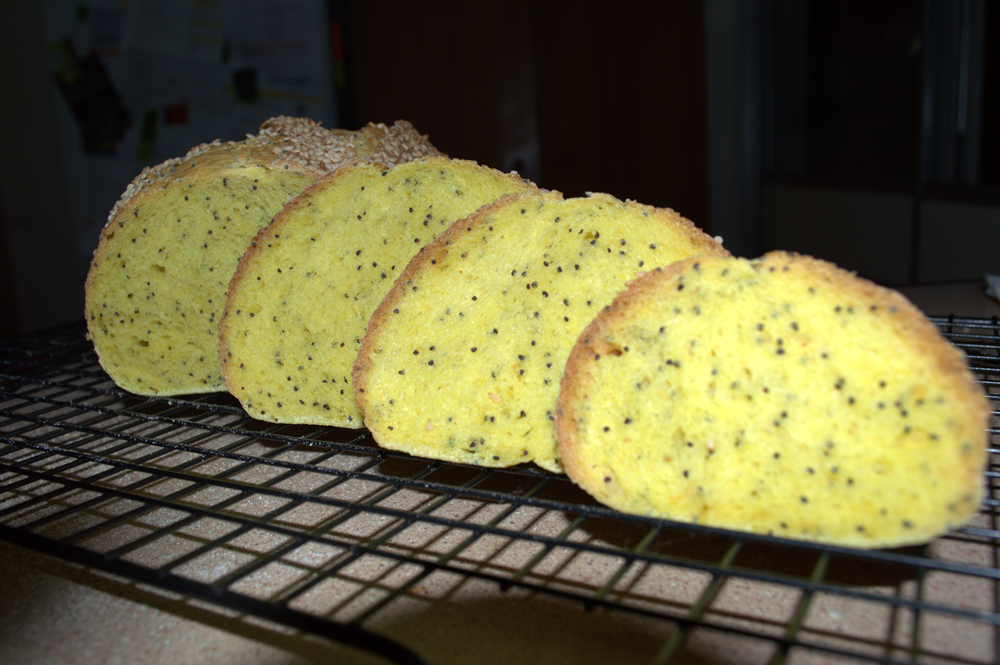 The larger loaf looks like it is wearing a cap.

loaves look not just beautiful, but delicious as well.  Your gift is very generous, and I know will be deeply appreciated.

Your use of the unusual old-fashioned shaping absolutely makes me smile :)

Great job, thanks for sharing, and keep baking happy!

Thanks folks  , I think the cap is becoming a bit of a signature loaf it is so easy to do, it  has a great visual effect, it presents its own expansion point and does allow for a bit of a play, I guess  combining a couple of different doughs would be fun perhaps a spelt cap on a white base and vice versa (watch this space). I was very pleased with the taste Danni, not overpowering and very aromatic, beautifully light and I think I cracked the proportions first time around. I was aiming for a 800 g dough which is good for a single loaf for my Bannetons  so the weights were

I took 240g of the flour (1/2) added all the yeast, water, oj , zest ,poppyseed, and turmeric whipped them altogether in a bowl and set aside for half an hour I then added the remaining flour, salt lard and egg mixed by hand on the bench. The dough was given a 3 hour proof in a bowl its quite cool here, the kitchen was 17 deg C.

The dough was knocked down and scaled, this is when I departed from the original plan of a single loaf as I wanted to taste it my self and you cant really give a loaf with a chunk missing off it can you?  so scaled at 500 and 330. the piece for the cap was pinched off probably about 70g and all handed up covered and given 30 minutes bench rest, The loaves were then shaped the smaller loaf being placed upside down in a lined cane basket and the "Auvergnat" had its cap rolled out with a pin to almost the width of the loaf and placed on top in the centre , I did give it a touch with the damp  paint brush prior to placement,  stood it upright in an oversized lined Banetton. they were placed inside tied plastic shopping bags and proofed for around an hour they were then  washed with a boiled cornflour wash, seeded with sesame seeds, scored with the lame on a preheated pizza stone and into a hot oven with a steaming terry towling hand towel on a baking tray  in the bottom of the oven for the first 10 minutes which was then removed and the stone turned and baked at 210 for the total gas oven time of 35 minutes.