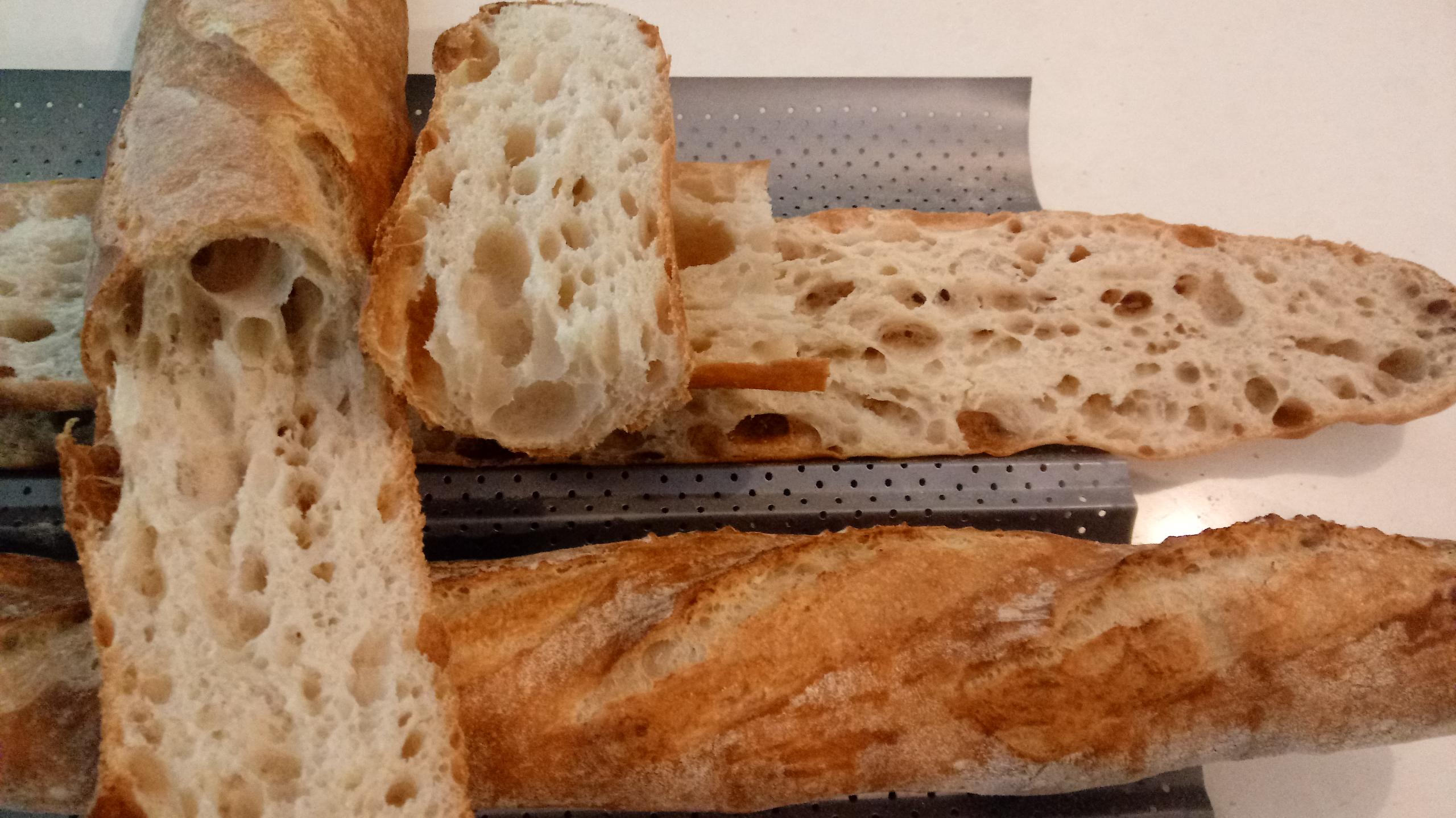 As some may know I am a big fan of fresh yeast and go to great lengths to obtain it but after a recent killing spree whereby I knocked off a whole block last week I found myself completely void of my usual trophy block that sits dormant in the freezer (you guessed it I left the door open one evening and ended up with pita baguettes last weekend). So this weekend I opted to go with Fleishman ady for the usual bake and since its been a very long time since I have used it decided to do a test run on Friday / Saturday using gold medal ap instead of the last batch of t65 (another pride and joy of my baking kit) ... Btw that's another topic all together - ie flour options. First thing I noticed after doing the standard conversion (simply third the usual fresh weight and presto that's your ady quantity). In this case 6g of fresh for a 800g flour (about .8%). ,what I noticed was much much faster activity on this test bake. The dough was rising fast and quickly to double / triple volume. With that observation for today's bake I decided to half again the quantity (one sixth for 1g to 800g flour) of ady and still noticed insane activity. By morning after cold bf the dough was easily triple volume and I am accustomed to more like double volume. The final bake resulted in loaves that were extra foamy and again time was cut from the final proof from 40-45 minutes down to 30-35 minutes. I noticed the girth of the loaves was much wider and scoring felt different as well - like cutting a membrane that wanted to burst rather than leave a nice defined slice.

Some have said that the flavor is improved with fresh yeast but I did not notice any favor changes. The only difference was that the ady seems supercharged with activity compared to fresh. There is a distinct difference in odor of the raw yeast as fresh is sweet smelling and very pleasant whereas ady has no sweet hints but that does not reflect in the final loaf. All I can say is that it seems ady gets to work much faster than does its fresh counterpart and is likely to produce a fluffier lighter and more foamy style loaf. Since my personal preference is for something a little denser, I think I might be inclined to use half again the quantity that I used on the second bake mentioned above - in other words a 12th the quantity of fresh.

I would be interested to hear any other takes on this - agsin, I really do not think that fresh yeast results in any flavor differences and assuming I had reduced the quantity to mimic the same rate of activity that I routinely see with fresh yeast, I would assume the loaf would be identical. This extra puffy bake seems a product of more organisms multiplying producing much more co2 than usual. As if now I have decided to start baking more sourdough loaves and so have a new starter building day 2 so it might be interesting to run a whole set of comparisons ie ady vs fresh vs a levain vs a hybrid levain / tasted loaf. Maybe doc dough can weigh in as he recently pmd me showing off his sourdough t65 baguettes which look fantastic but we were both remarking on crumb structure which you can see in the included photos is interesting especially if you have been seeping track of my obsessive crumb shots and analysis. Tks and now off to add a few slices of lox to one of these loaves :)

I rarely bake with yeast and when I do its normally dried yeast for convenience only. I don't bake with yeast often enough to warrant keeping a load of fresh yeast which I do prefer.

I am of the opinion that fresh yeast produces a tastier loaf. But then again you'd have to produce the exact same loaf under the same conditions side by side to compare properly. What I can say though is the tastiest yeasted loaf I've ever made was with fresh yeast. I've never been able to reproduce the same effect with dried... yet!

It's more apparent, for me, when using the yeast in a way that helps bring out more flavour. Like poolish, biga or simply using less and longer fermenting. I think the differences become more apparent this way. IMO.

You can buy small blocks from Morrisons if you have one nearby - usually in the butter section - they do a tray of 4 blocks for about 50p IIRC. Or if you have a Sainsburys closer, then they'll sell you an 800g block for about £2.30. Don't keep it in the freezer though - in a tupperware in the fridge is good for 4-5 weeks.

Other than that, the Doves Farm dried stuff is what I use when I don't have fresh - cheaper than buying 7g sachets.

I've got a small tub of Allinson's dried yeast which has lasted me for absolutely ages. Keep it in the fridge, can't remember when I bought it but it's still going strong. Thanks for the fresh yeast advice from Morrison's. 800g worth from Sainbury's will be too much. The small blocks sound better.