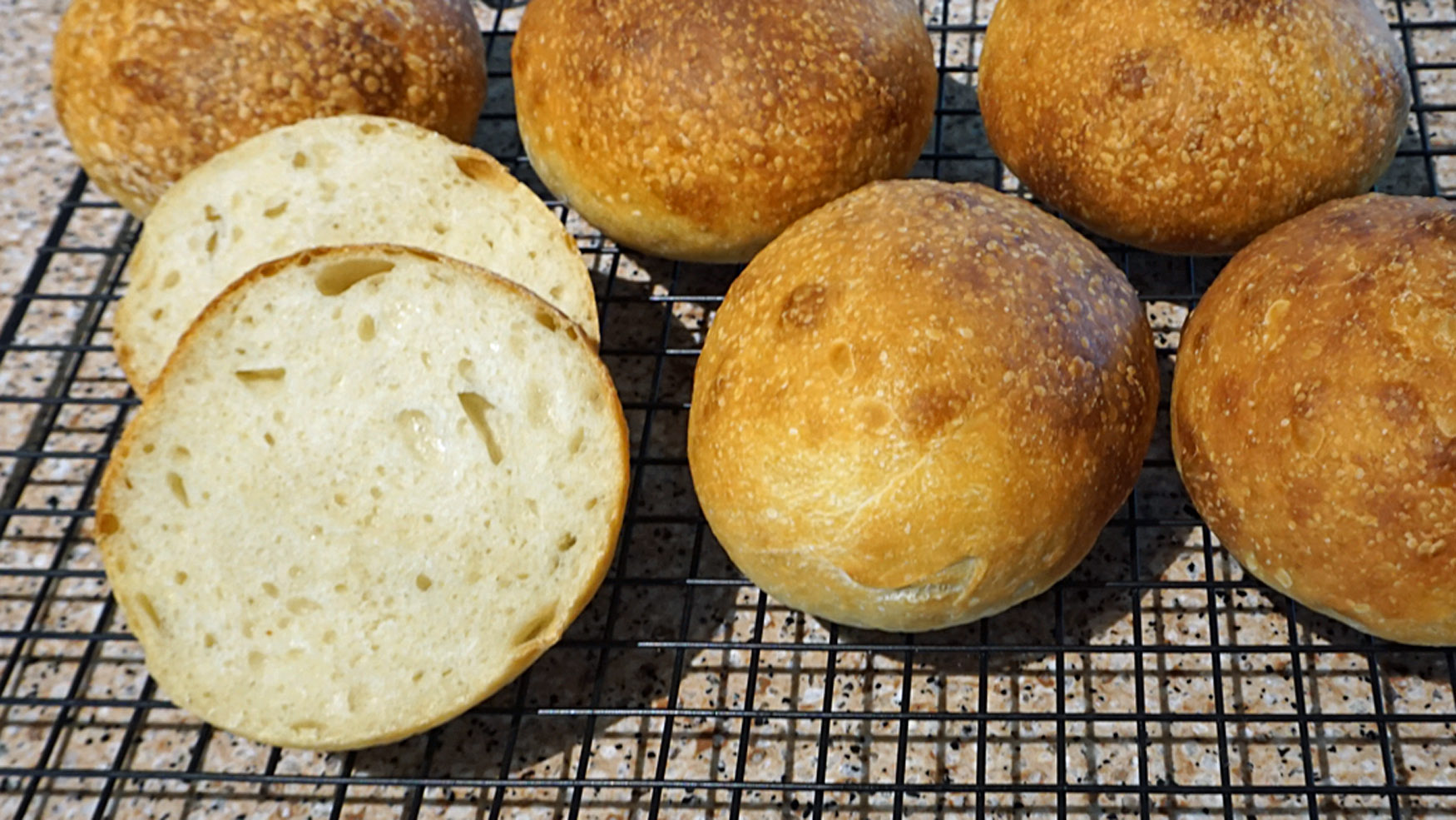 It's been too long. I forgot how to post pictures + text, or the procedure has changed.

wherein I tried to adapt a "Bourke Street Bakery" recipe.

The post reports a mixed success: good dough, good flavor and crust, but a modestly open mature crumb but not the crumb expected and desired. Furthermore, I was shooting for hamburger bun sizes. Following the book's suggested sizing I got mini-slider sizes.

I decided to start anew.

I googled "Olive Oil Bread" and scanned a handful of the usual 15 billion responses.  I found the expected wide variance in ratios, most didn't include milk as an ingredient and many used a greater amount olive oil than the Bourke Street Bakery's recipe.

Here is the formula I constructed and baked.

Mixed all ingredients except salt and EVOO forming a rough ball. Rested 45 mins. to hydrate

Incorporated salt followed by EVOO in three kneadings not adding more oil until the prior infusion was fully incorporated (approx. 10mins. total time)

Chilled dough in refrigerator (38°F) for three hours. Transferred to wine cooler (54°F) for overnight ferment (7 hrs,) In hindsight, could have placed it in the wine cooler immediately following 2nd S&F. I took two hours in the proof-box (82°F) to "wake-up" the dough the following morning.

I wanted a sandwich-bread-like crumb. These, and future baked buns will host burgers, pulled pork, brisket, home-cured ham or bacon or anything else we think appropriate. For now, this is the go-to bun I've been trying to create. I attribute the softness to the milk, EVOO and the modest addition of potato flour. I didn't aggressively degas the dough. I feel certain this would have eliminated the few irregular bubbles in the  crumb.

The crust and crumb are soft, yet lightly chewy. And the EVOO's flavor come through. After I took the picture I loaded the cut bun with sage breakfast sausage. The sausage was up-front, but the EVOO was evident.

Very nice crust! If you use a lower protein AP flour you will find the crumb more pillowy/feathery  and less chewy. Lower protein and making sure you achieve windowpane are the 2 requirements I have found for billowy buns.

Am I doing the math correctly? 65% hydration?

However, while not contributing to the hydration, the Olive oil softens this dough extensively.

I plan to do this again soon, but will use AP flour (except for the starter) to compare although we certainly like the light chewiness the bread flour delivers.