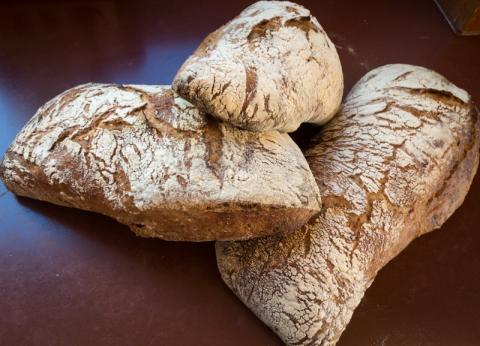 It is becoming a theme of mine when I travel, I like to seek out excellent breads in the new location, something shared, no doubt, with many other TFLers. It also has become something of an obsession that when I find a special loaf I try to reproduce it. Such is the case with this bread.

Let me step back just a bit. We had been planning a trip to Prague for several months. A couple of months before we left, my wife and I dined at a favorite restaurant, and in the course of the meal we learned that our server was newly arrived from (wait for it) Praha, the Czech name for Prague. Being in the food business, she gave us a list of several restaurants that she thought we might like. As I read about these restaurants before we left, I discovered that one of them was quite well known for their house-made bread. Obviously, that sealed the deal. 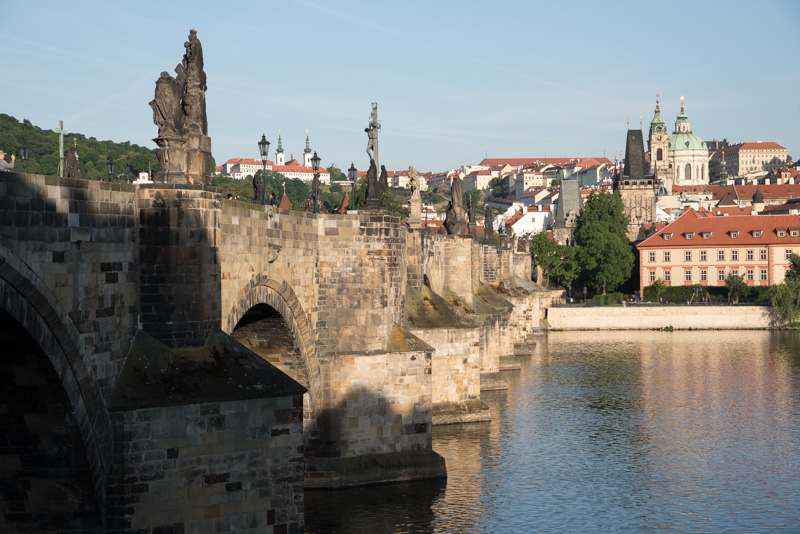 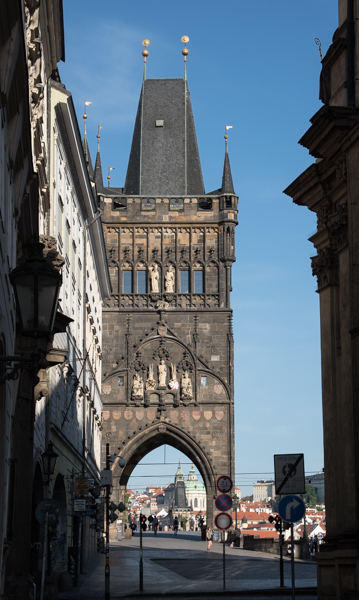 A couple of views of the Charles Bridge in Prague

Eska is a very modern restaurant barely 18 months old when we went there the beginning of June. They are part of a large restaurant group, apparently with enough money to seed the place with a very large space, modern appliances (including a wood-fired oven, but I’ll get to that in a moment), and open architecture where diners can see everything that goes on in the kitchen. They served us as much bread as we wanted with our meal, and it was really tasty and moist. 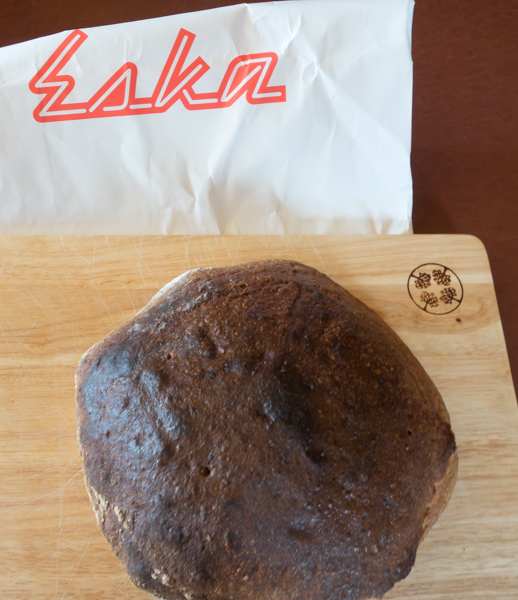 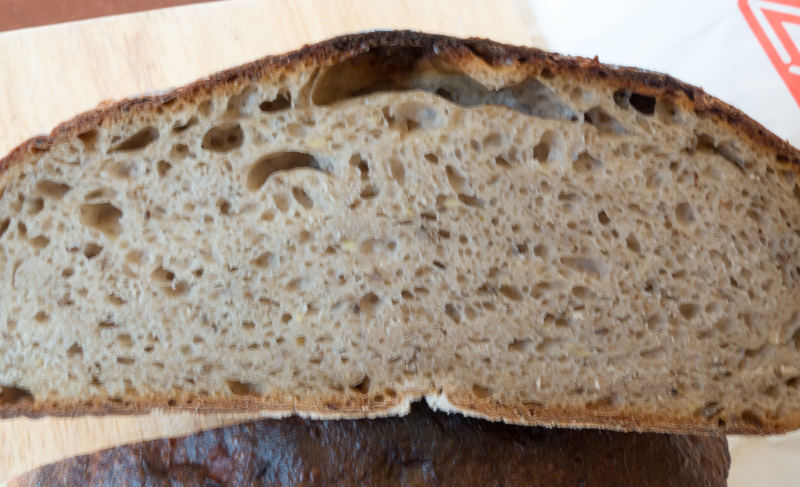 They were extremely friendly, especially Niki, who speaks excellent English. We talked for a long time, and she let me watch the bakers as they prepared the loaves and loaded them into the oven.  Unfortunately, I didn’t take photos of the oven, but it was an Italian-made deck oven with 3 individual 30-inch or so wide doors for loading. The wood is loaded into the back corner, and steam is injected manually with a sprayer. They are rightfully very proud of what they make there. Niki then offered to give me a sample of their starter, which I was glad to have. We arranged to go back the day before we left to minimize the time the starter would not be fed. The liquid starter survived the trip back in the checked bags (without leaking I’m happy to report). She also gave me a few details about the two different breads they make so I was able to reproduce a decent loaf without much problem. It even tasted nearly as good as the original. 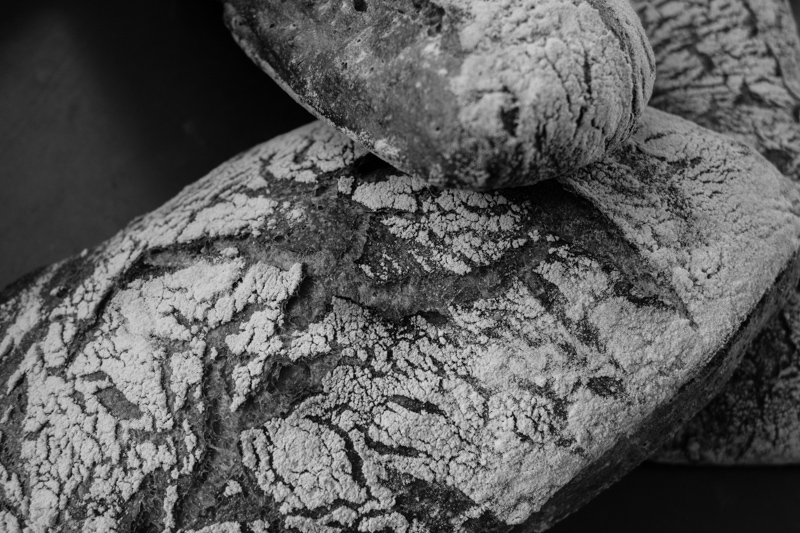 Three loaves from my second attempt with only 27% rye flour

About the bread: Eska makes only two types, 33 and 66, named for the percentage of rye flour in the formula. Niki told me that they also use 10% boiled, grated potatoes to keep the crumb moist. The liquid starter they gave me was quite liquid, I am guessing 150% hydration all rye. I don’t know if that is how they maintain the starter or if they use it at that hydration. Clearly some caraway seed was visible in the crumb, as was the potato.  And I tasted some malt as well. 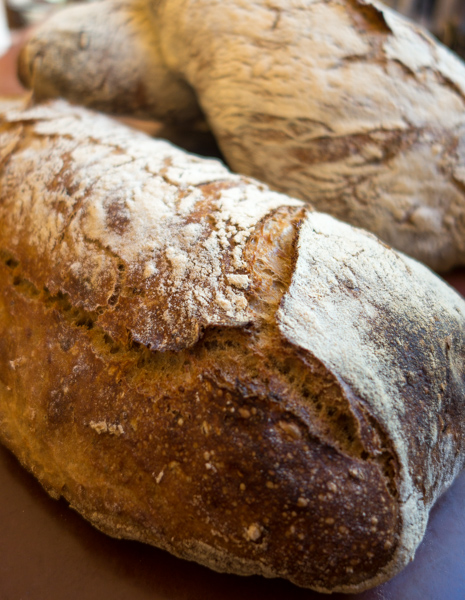 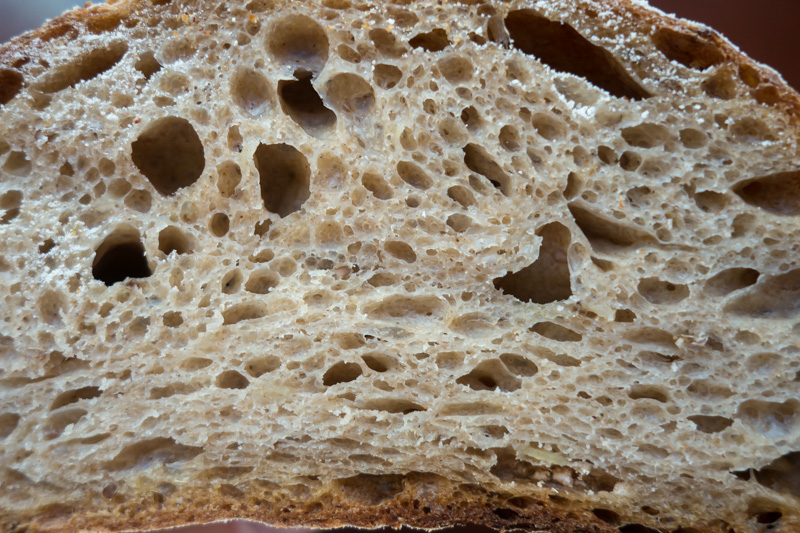 Crumb of my attempt. If you look closely you can see some yellow potato bits incorporated.

For my loaf I chose to cut back on the levain hydration to 125% and most of the rye flour is in the levain. I also kept the overall hydration of the dough fairly high at 82% since their final product was quite flat. I observed that at Eska, they proofed the loaves in large wooden boxes, possibly as large as 12” x 16”. The 66% rye loaves were baked whole while the 33% rye loaves were cut in half before baking. Here is the formula that I used: 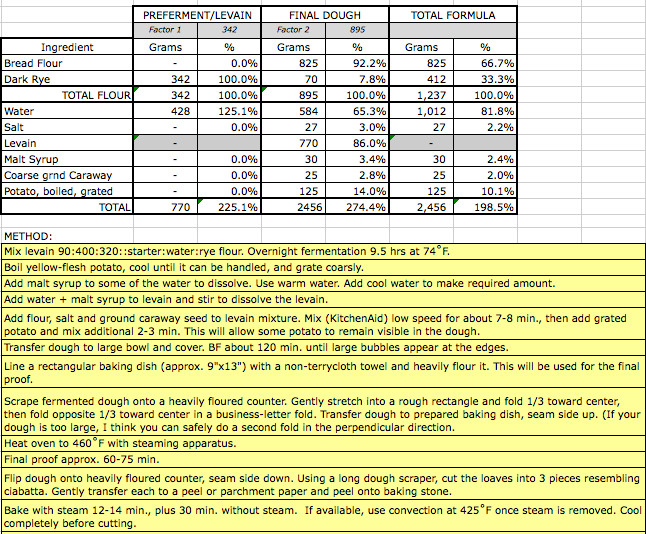 If you ever make it to Prague, I recommend Eska without hesitation. Besides the bread, the food dishes were novel and innovative, ingredients very fresh. It is in the Karlin district so it was a short subway ride to get there, but well worth it. And who knows, you may get to take home some starter, too.

It is also good to challenge ourselves occasionally! This bread was easier to do than I thought.

starters and recipes.  What a great way to remember the trip.  Nice post.  The bread looks like it was made there - except for the WFO part:-)

Thanks for the comments, DBM. There are lots of things that will tweak my little gray cells from Prague, not just the food. The way we were treated at Eska was truly special.

We were in Prague last autumn, and the bread everywhere was excellent. We stayed in a lovely apartment a couple of miles from Wenceslas Square, in a mostly residential area. There were several little corner convenience stores around the area and all of them had not only fabulous fresh fruits and veggies, but also freshly-baked bread. I was quite amazed when the little shop's proprietor bustled over with a basket of fresh rolls while I was shopping one Sunday. Not what I expect from a convenience store here!

Thanks so much for the info, recipe and pictures. I'll have to try this one!

We stayed on the other side of the river, between the castle and the U.S. Embassy. There weren't too many little shops in our neighborhood, but I agree that when we bought rolls from them they were good and there were many varieties. We also got a pan loaf at a farmers market one day, and that was excellent as well. Still, Eska was a notch above.