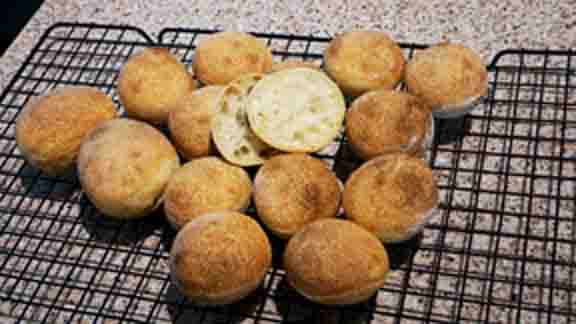 It's been two years + since I last posted on TFL. I had reached my goals: improve my baking skills, include sourdoughs among them and develop a modest list of breads appropriate for any and all occasions in our lifestyle. That list now includes a variety of commercial yeast doughs, sourdougs, and baking powder doughs. Along the way a host of new cookie, cake, and pie recipes crept in. And we now seldom buy pizza elsewhere.

Ultimately, I, and I'm certain most of the TFL regulars got tired of my posting the "same old s***. I quit posting. But I continued to bake: almost every week. It's now been more than twenty years since we've bought a loaf of any commercially baked bread. and I remain grateful to The Fresh Loaf, and its many passionate, and gifted bakers for easing my struggles.

1. A few years ago, I'd been seduced by the aforementioned book. Its photographs are dramatic, Its prose well written, and a scan of its breads and other recipes seemed interesting and appealing.

Nonetheless, until the last two days I've never tried a single one of its recipes.(I have looked at the pictures often ).

So I scanned again: Olive Oil Breads caught my attention.

Scanning the base recipe I found it contained all the usual ingredients of Foccacia and a wee bit more: 20ml of milk.

I bake Foccacia frequently. We use it as a base for pizza-like toppings, panini sandwiches, soup, croutons and simply toasted and buttered for breakfast. We also often use Foccacia in place of conventional buns.

2. I've never found a home-baked hamburger or hotdog bun recipe I like well enough to bake a second time. I've tried quite a few.

My 72% hydrated foccacia formula--no milk--yields a very open crumb. However, I attribute the crumb's extraordinary open crumb to a fifteen-hour fermentation at 54°F. 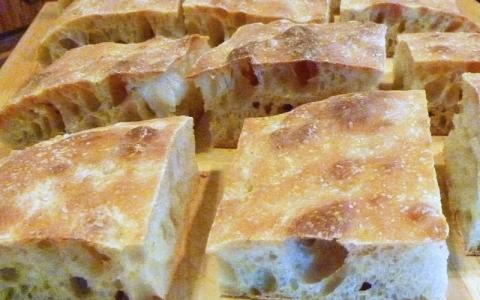 Most often we welcome this open crumb, but there are times we would prefer it a bit tighter--hamburgers especially.

My sourdough starter is conventional: flour, water and a natural colony of compatible yeast and lacto-bacteria. I maintain it at 100% hydration and store it in the refrigerator. I replace it each weak with surplus ripe levain made using a three-build, 24-hour process for that week's bake. I developed the three-build process when I first committed to baking sourdoughs, and, while I've simplified the process, I've never abandoned it. I've been using this method since 2011 when I had to replace my contaminated first colony. My current starter is the replacement.

I estimated the target hydration of the BSB's Olive Oil bread recipe at 65%. This initial close look at the recipe revealed a mix of weight and volume units I found annoying. I generally don't worry about tsp. measures vs. single digit grams, but 20 ml of milk is not 20 g. nor is 70 ml of water 70g of water, except at some Celsius temperature I can never remember.

Replacing the "Ferment" I adjusted the amount of sourdough starter to replace the 70 ml. of water prescribed, and borrowed flour from the dough recipe to match the estimated 70% of the hydration of the prescribed "ferment". Furthermore, I added the prescribed salt (2.5g) to the dough's recipe, excluding it from the ferment, and omitted entirely the prescribed 2g of fresh yeast. The remaining ingredient, 1/2 tsp of milk was added to the mix.

Preparing the Olive Oil dough I replaced the "Ferment" with the equal weight of my modified sourdough starter described above. The prescribed yeast ingredient was omitted entirely. Other than the flour employed to balance the "Ferment's) hydration (30g)  all the remaining ingredients: water, EVOO, mik and salt were added as prescribed.

However, I subsequently prepared the dough somewhat differently than directed. Initially, and by hand, I I mixed only the flour, milk and water allowing the mix to hydrate for one-hour in the refrigerator. Following, I combined the "Ferment", EVOO and salt, again by hand. After a second 1 hour rest I conducted three Stretch-and-Folds, interspersed with 1-hour, chilled rests. The dough then rested in the a wine cooler at 54°F over-night (9 hrs.)

The following morning I warmed the dough at 82°F in a proof-box for one hour. Subsequently, using the prescribed dimensions directed, I reluctantly cut fifteen rounds, 1-1/2 in. diameter, with a biscuit-cutter from a 3/4" thick dough sheet.

I say reluctantly because I felt certain this dimension would be too small to fulfill my wanting a hamburger bun result.

I was further irritated by the book's direction to "Preheat the oven to its highest temperature." My oven can produce a consistent 550°F. I chose 450°F. the temperature I routinely bake sourdoughs.

Cons: As expected, despite the expected expansion proofing, and equally satisfactory oven-spring, the buns are hen's egg size.

The hoped for "consistent interior crumb" didn't manifest. The crumb is irregular, and quite open. That said, I hasten to add this may be due to the slow, chilled dough ferment. I see the same crumb structure (and often greater random) in all sourdoughs, and some commercial yeast doughs chilled and fermented long hours. 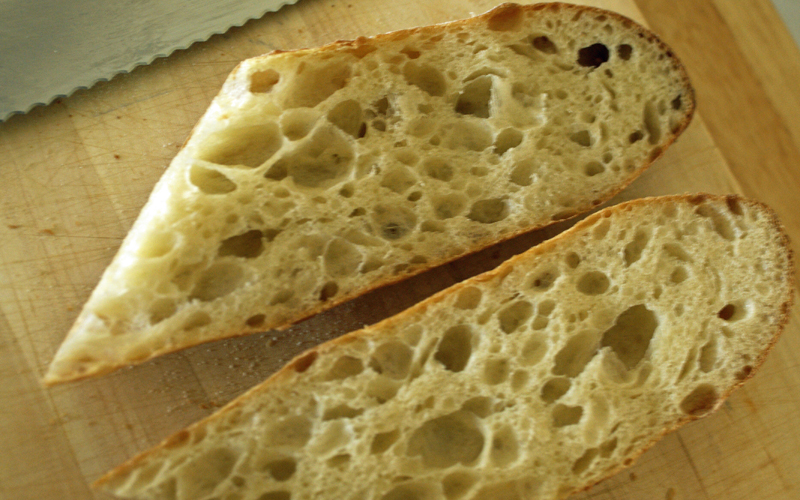 These baguettes made to 65% hydration were chilled, and bulk-fermented @ 54°F for 15 hours.

The lead-in photo shows the crumb open, irregular and mature (noted by the crumbs iridescence). Despite it's not being "consistent interior crumb" I love it. I'm going to make this dough another time--probably a few more times. The crumb, while open, doesn't approach our Foccacia. It's flavor is excellent (likely due to good ingredients, but the long ferment also contributes. The crust, not yet mentioned, is thin and softens within a few hours after being stored in plastic. Given I can retain the crumb, the thin crust with hamburger bun radii this might be the elusive sought-after bun.

Despite my disappointment and irritation with its recipe format, I"m a bit more critical re perceived laziness concerning testing recipes at home-appliance achievable temperatures. None the less I'm glad I bought the book. I bought it to experience, at least a wee bit, Australian baking culture. More personally important, It's home to such foodie recipes as "chicken pies with eggplant and mushroom", and "pork, apple and braised cabbage pie". What's not to like?

I'm hoping the second edition will omit the volume measurements bigger than a tablespoon.

Welcome back David, and I did enjoy your post I have the Bourke Street Bakery book, given as a present by my daughters  and have enjoyed the read  and followed a few of the dough formulas too. The Panini came out particularly well which was also based on the olive oil dough. The  not so Humble beef pie is sensational and I believe one that Shiao Ping has made. Beef cheeks here have grown in demand here of late  being quite  popular so are no longer cheap and they do require very slow cooking but certainly worth the effort if you can get hold of them.. The ISBN for the book is 978-1741964332 if anyone is wanting to request it at their library. We look forward to seeing more posts from you David