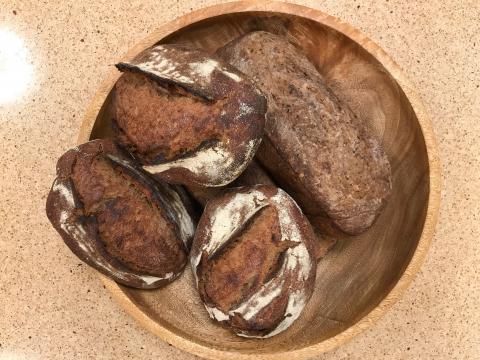 The Zen part of baking is the fact that you can't alter every part of an artisan loaf—although you can get close. Eventually the rise and opening of the loafs seam will go its own way and run off in the direction it sees fit. A baker can only control so much before the bake, but once the yeast begin to heat up and ebullition of CO2 is accelerated we can only relax and be happy with what they decided to do. After hundreds of bakes we finally learn to let the loaf decide what artisanal and craft really mean. Defining it ourselves is like telling someone how to interpret Vincent Gogh. The bread will speak for itself and tell its own story, just make sure to have fun and master each step of the process as much as you can, the dough will do the rest. 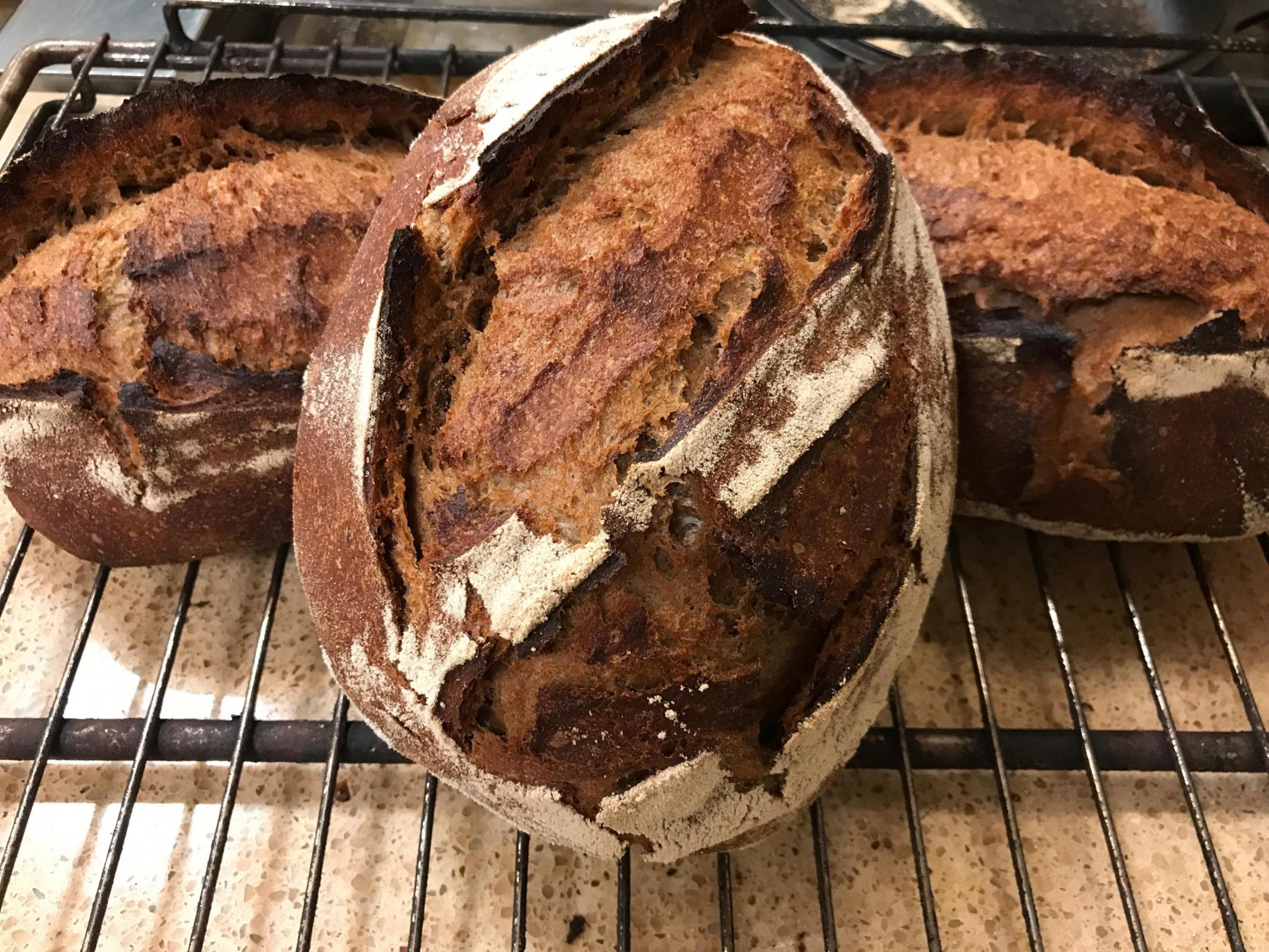 I made these last loaves out of a chocolaty coconut porter wort. Wort is the malted barley liquid that is extracted from a brewers mash—hot water and barley. Wort is not beer yet since no yeast has been added. A good brewer makes really good wort; the yeast make good beer. 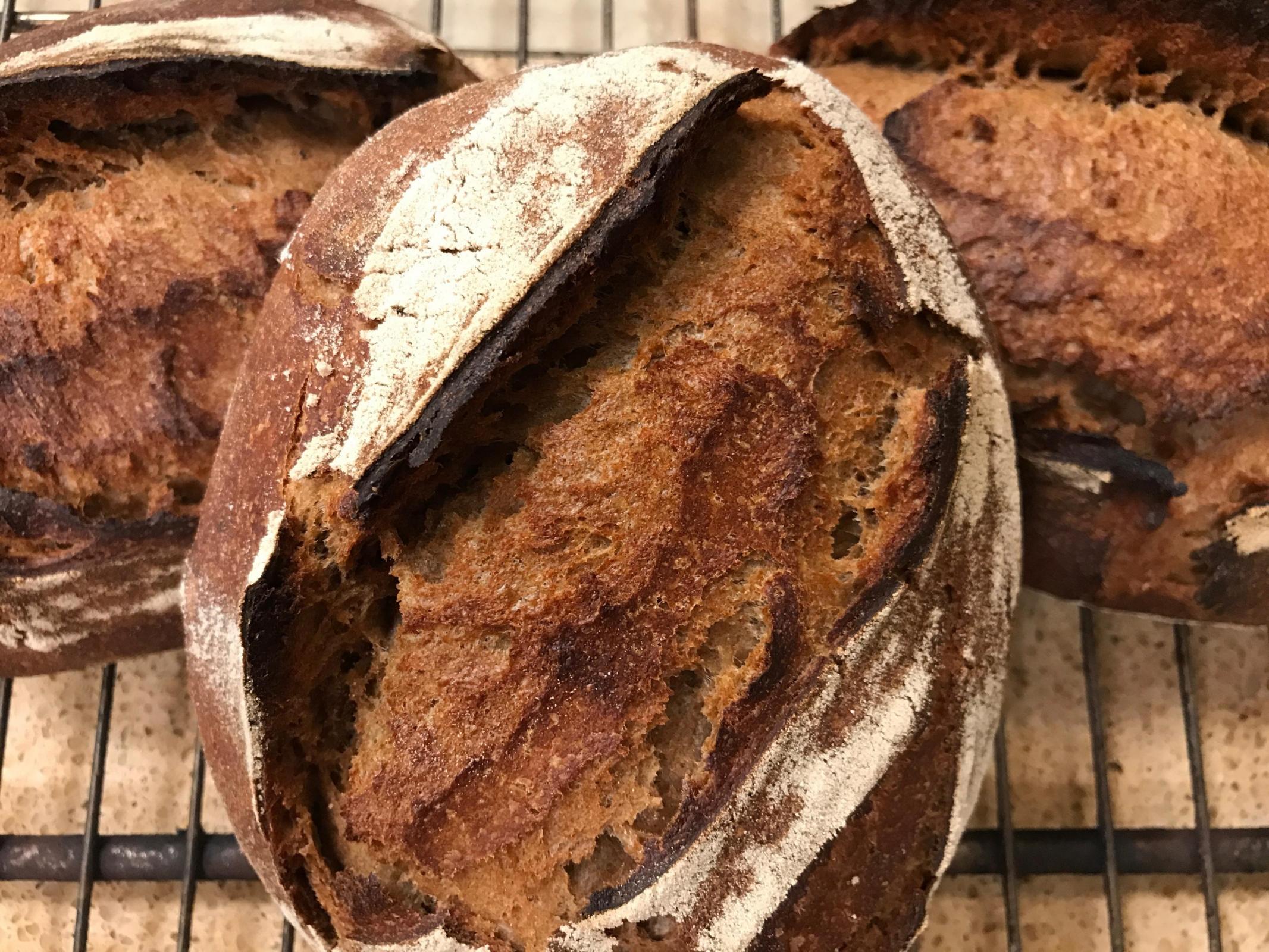 I had some extra wort from brew day so I used a 90% hydration level, replacing all the water with porter wort. The wort, and resulting dough, smelled amazing during brew day. The steam coming out of the kettle was intoxicating. Chocolate, coconut, slight roast and toast from biscuit-like malts—wow. I decided from that moment on to always add fresh coconut shavings to my porters(one of the many benefits of living on a tropical island), maybe even my stouts too...or what about espresso? hmm. 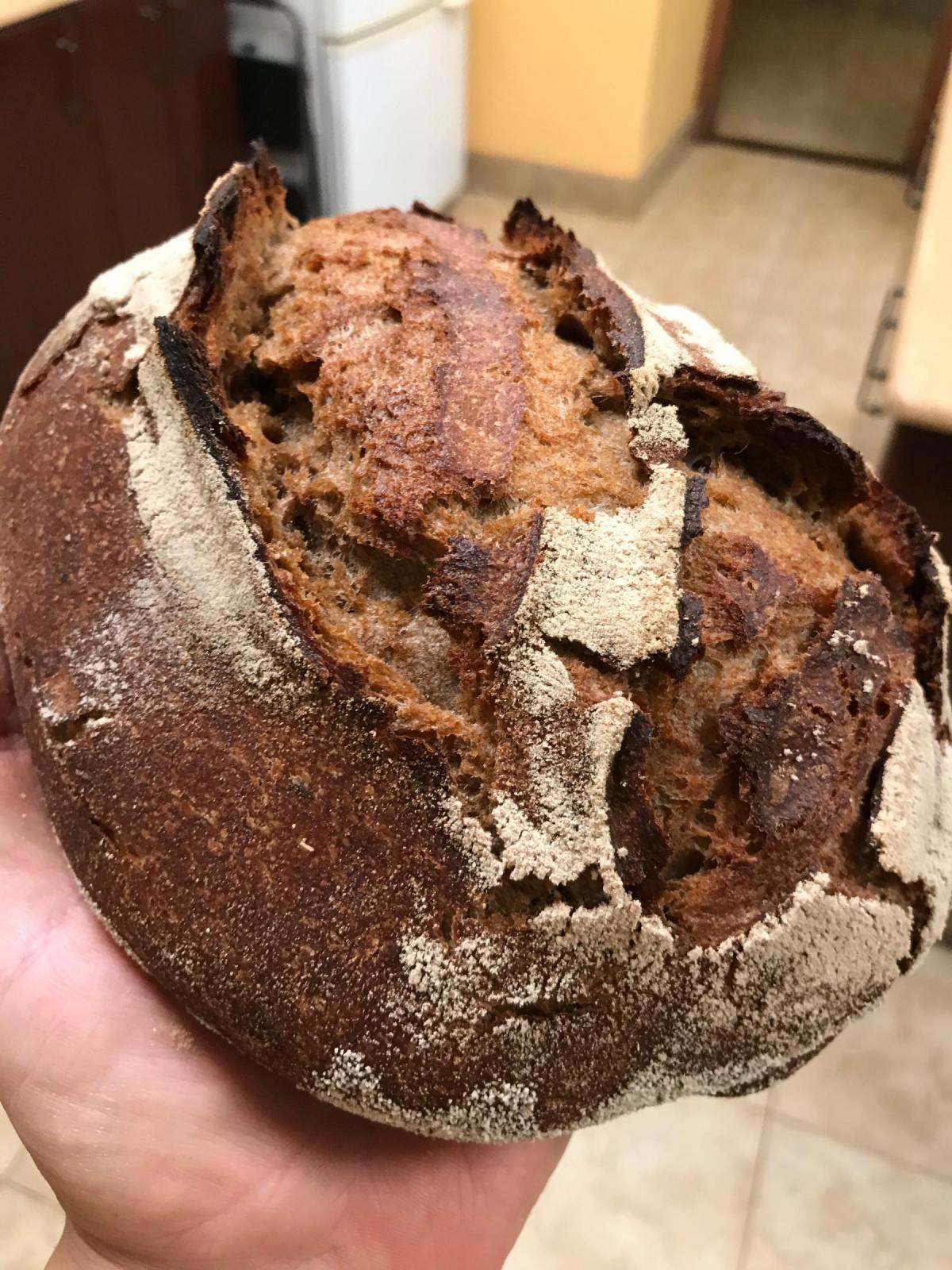 I put two of the loaves in a pan for practice. After making so many loaves in the French free rise style I have really atrophied any kind of American pan training, so I practice on occasion. The pan loaves always come out softer since the crust is focused on one area and the coloring takes twice as long as I attempt to fully bake the inside first with low oven temps. In other words, I still hate pan breads. Give me a free risen scored-up thick crusted sourdough loaf that I need a chainsaw to open up and I'm happy.

Normal salt, maybe higher than normal, and basic cold bulk ferment for 24 hours where in place for these loaves. I have learned that bulk fermenting is way more fun than cold proofing, and I like the outcome of the crumb better. These were noticeably more sour since the ferment was cold extended and it paired well with the malty sweetness of the porter. I forgot that the wort had hops in it, so a slight bitterness actually came through in the bread. These loaves were so different than the norm and highly appreciated by all. 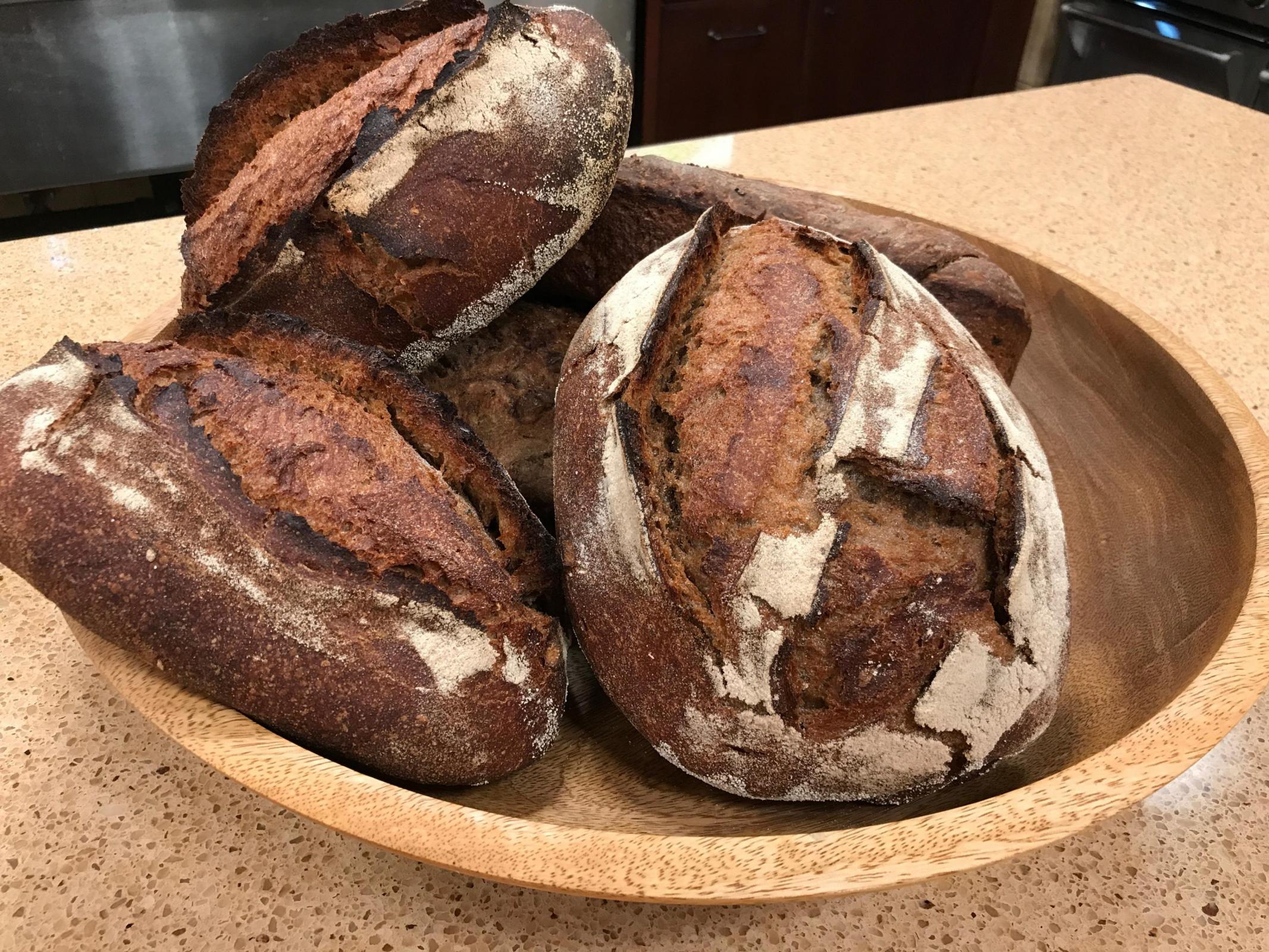 Coconut craft brews are darker in color like this one .  I would like to get a coconut blonde for a change and drinkability on a hot beach day there or in the desert here!

Can't wait to see the crumb on this one.  Well done and happy baking

I knew someone would ask! No such photo exists in this world. Next time...I promise.

I'll have to coax some wort out of hubby next time he makes beer. Or alternatively, I have some very nice malts (crystal, a beautiful dark chocolate/coffee malt and some plain Maris Otter) that I might mix into the poolish liquid or maybe the final dough. Do you think that would have the same effect? I know, gotta be careful with the Maris Otter plain malt (diastatic), but still, it tastes good!

I would at least make a mini mash on the stovetop to extract some of the goods—especially if the malts aren't crushed yet. Crush em and make a small mash, otherwise the starch will not have been converted, i think.

These are beautiful loaves Yogi. Glad to see that I'm not the only one that's baking in the tropics!

The tropics are home to the lucky ones.

Truly interesting bread Yogi, So the Wort is the liquid required for the beer making  rather than using the spent grain from the Wort making process that some have put to good use where as I have used the Dregs from the bottom of the fermenter to feed a different starter rather than regular yeast to some good effect most recently  from a alcoholic Ginger Beer which had some vigour

Yes I almost forgot that the next project is to use the beer yeast. The wort makes a great water replacement!

we look forward to seeing the results Yogi thanks for sharing

Very nice.  My initial thought is that wort would sweeten the bread immensely.  Not surprised that it's very dark.

Since almost all beers will have hops added at some point in the boil, the resulting liquid is actually pretty balanced with body, light sweetness for fermentation and alpha acid bittering from hops. It is nowhere near like the addition of honey in dough.

you seem like someone who knows what he's doing. I've been dabbling in sourdough bread lately, but can't seem to get it right. Of course I don't want just plain white sourdough. No, I want beer flavored sourdough that's malty and crunchy with spent grain and a crispy crust and lotsa wholes. ;) So yeah, mine doesn't really look like that yet. It tastes great, but it's too spongy the crust is more like store-bought bread.

What I did: I fed my starter with beer wort from a brown ale and rye flour (half & half by weight) until it passed the float test. I used  whole wheat flour 100 g, Rye 75 g, barley beer grain mix dry and milled 75g and white flour (Better for Bread) 250g. I mixed  350 g liquid (half homebrew and water) to the flour and let it sit for 1 1/2 hours. Then I added 50 g of fed starter and salt and mixed it all up in my KitchenAid - dough hook for 8 minutes on medium speed. Halfway through I added 1/2 cup spend grain (I always save some in freezer bags when we brew). Then I put the dough in the bucket and let it sit for three hours and put it in the fridge for the night after that. I pulled it out the next evening and let it sit on the counter (covered) overnight to bake the next morning. I did finally rise nicely, but when I tried to score it (I suck at that) I just created dimples and the dough deflated somewhat. I used the cold-oven method of baking in a dutch oven  with parchment paper in the bottom @450F for 30 min with lid, then removed lid and temp down to 425 for another 15-20 min. I looked okay, but no "ears" or crispy crust.

Can you evaluate this?  I'm thinking that maybe using the Kitchenaid was not necessary since I autolysed; adding the spent grain made the dough too sticky (water-flour percentage was not accurate anymore), or baking in cold oven didn't give it a chance to crisp. What do you think? 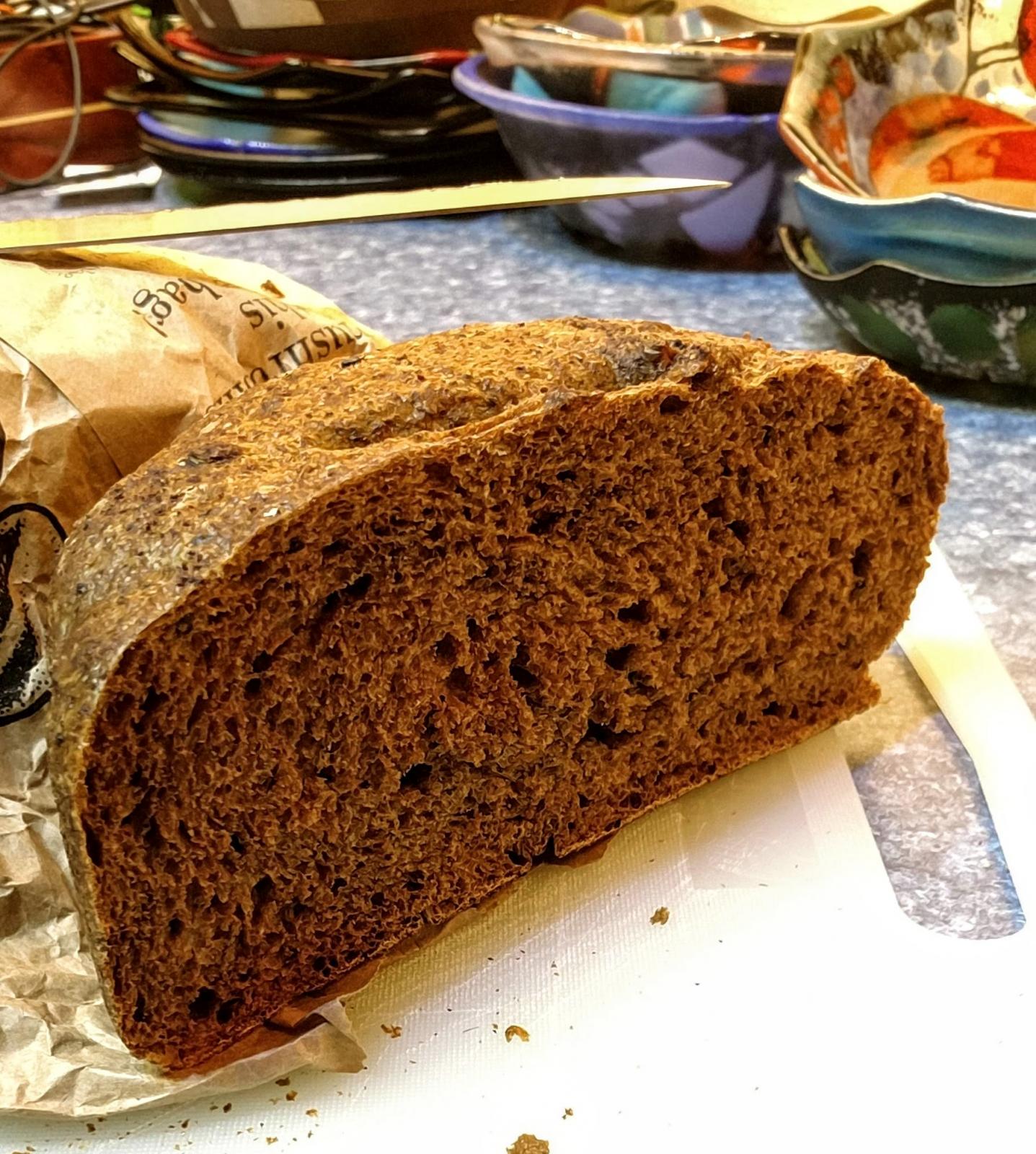