Couldn't I just as well use single-edge blade, sharp knife, or even a box-cutter to get the same (functional) result -- and save 20 bucks?

Perhaps it's a matter of bread-beautification.

Single edged razors have the disadvantage of having only one pair of tips to score dough as well as typically having a stiff backing side which renders them unbendable.  With double edge razors there are four distinct cutting tips and the blade can be curved on the lame handle.

For small volume baking at home I find that a sharp peeling knife works perfectly well. Our box cutter didn't work for me, too awkward and bulky, and razor blades are a waste of money and time. They become dull after one use and can't be resharpened in a second in electrical sharpener as a knife would.

For artistic work and a large volume baking we might as well use special knives, called lames boulanger a boule. 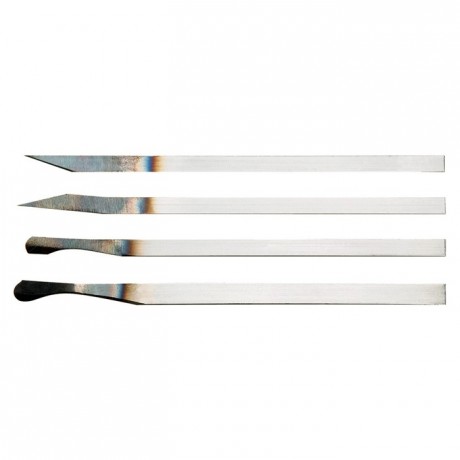 They are for a baker what brushes are for a painter, they allow for a swift execution of different kinds of cuts and patterns. Bakers don't use razor blades at all.

from a razor blade, which makes for at least 80 loaves from one double edged blade.  At least that many.  For me, that translates to somewhere around 300 scores per blade.  And I could probably go further without pushing the limits of blade use.

I'll have to differ with you on whether professional bakers use razor blades or not.  A simple survey of videos featuring professionals including Hitz, Hamelman, Phillips, Ellis, SFBI bakers, and multiple other "big name" bakers yield that they mostly use double edged razor blades.

Marianna has presented some nice blades that I might use for artistic sculpting of bread. For the simple score I use a metal lame handle and double-edge razor blades. I buy replacement blades at the local CVS pharmacy and they are found in the shaving aisle.

The reason for the curvature of the blade when placed on a lame is to slightly lift the flap of dough as you make the slice when you score. This is part of creating the grigne we all seem to desire.

I too have seen more lames used by professional bakers than any other tool for the purpose of scoring.

You can get a box of 100 platinum blades from Amazon for about $10.  This is likely to last you a lifetime.  there are a lot inexpensive blade holders.  I use the one by Mure and Peyrot that I got from Amazon.  It's easy to change blades without fear of slicing a finger tip.

As a home baker, I find that if I use a new razor blade to score two loaves and then come to use it the week after, it's blunt, unless I turn it round.

I'm sure I could score sixty loaves in the first session and it would be sharp for all of them. It's something to do with exposing the blade to the dough/moisture/air that seems to start the "blunting process", which ensures that next week it's nearly useless.

Having said that, I still use them as nothing else works as well; I've tried scalpels which you would think would be mega-sharp, but they don't work as well. As AlanG says, they're pretty cheap and a blade every two weeks won't break the bank for most people.

So now I understand the benefits of a double-edge blade and a bit of curvature.  Seems easy enough fashion a blade holder out of a chop-stick or wooden  equivalent.  Need to cut two groves in the holder so the blade will not slip during the cut.  May not be necessary, but "safety first'.

Using a conventional double-edge shaving blade, how far apart should the groves be for best blade curvature?  Can someone please measure this for me from their lame.?

The lames I use have no grooves. The blade will pretty much stay where you put it. I actually watched Jeffery Hamelman adjust the blade for different cuts, some with a flatter profile and others with a deeper flap. The spring steel of the actual razor blade puts a fair amount of tension on the lame.

You can make your own but SFBI has this particular model for $6.00. I'm sure there are others.

combination undoubtedly is outstanding for scoring, it is important to choose an option that works well with your own grip and preferences.

I have tiny hands and occasional grip issues, so quite often would not be able to handle a chop-stick or coffee-stirrer or even most of the "professional" lames.  Instead, I have a trusty and incredibly thin and sharp old bird's beak paring knife (it's been sharpened to almost non-existence over the years):  http://www.zwillingonline.com/30720062.html   The handle is the perfect size for my hand and the curve of the blade allows me to angle and lift on a cut the same as using the curved razor.

If you've got something similar to this hanging around, then by all means try using it and see how well it works for you.  Then you can try the razor-on-a-stick and see if that works better or worse.

There really is no "right" answer - it's all about what is "right for you".

If you use a single edge blade as an ersatz lame you might want a 'holster' for it. Something that would offer some protection to fumbling fingers and the blade's edge. My solution to the problem was a champagne cork and a  celebratory bottle of Korbel provided the perfect cork, a broad flat bottom to sit on (I can see some of you are snickering) and sufficient height to shield the edge with a margin for safety. As an added bonus you can dispose of a dull blade with it safely holstered in the cork and get a new bottle to celebrate your commitment to safety for garbage collectors and recycling. Just a couple of notes. The cork (it must be real cork not a plastic plug) must be removed from the bottle prior to use and the blade inserted vertically from the side.

Perhaps this will take some of the fear out of using a razor blade.

It isn't hard to do.

And if you look carefully you can see my bread taste-tester in the background.

would a ceramic knife work for slashing bread?

I think ALL lames should be supplied with holsters from new. These are sharp tools and some are irregularly shaped, (eg The Weekend Bakery one). It is remiss of the manufacturers not to provide an included bespoke holster with their lames.

A trick I learned from a class at King Arthur Flour was to install a magnetic strip close to where you will be scoring and park your cutting tools there. I installed a magnetic knife holder on the wall just above where I transfer my breads onto loading peels and I keep a couple of lames, a serrated knife and a scalpel where they are quickly available and safely stored.

To injure myself I would have to climb up on the table and hurtle myself at the wall. At this stage of my life, just climbing up on the table would be out of the question :-)