So, like an Icarus who flew too high too fast, long before he learned how to build an airplane, last weekend I got too cocky thinking that I could do variations of my own, without having to research proper recipes.  The result was two utterly lifeless loaves, which, albeit still edible, definitely wished they have never been baked at all.

Since I'm of a firm belief that we can learn just as much - if not more - from failures as we can from successes, I am posting it here as a warning to others like me: "Learn to crawl confidently before you do... well, practically anything else".

I started with the same simple SD recipe I used a few times before, but decided to split the dough into two parts and make two battards, one with Kalamata olives and sun-dried tomatoes, and the other with walnuts and figs. After autolyse and final mixing, I allowed the dough to BF for 1 hr. (It was supposed to be 30 min, but it took me much longer than expected to prepare the extra ingredients.)  I then did one set of stretch/fold, divided the dough, flattened each half, spread additional ingredients, and did another couple of stretch/folds. I am not sure where exactly I went wrong, other than I think I loaded waaay to many "extras" into the dough.  Each battard was about 460g of dough, and each received about 70g additional of mixed extras.  As you can see from the photos of the crumb - if you can even call it that - that was definitely too much.

I followed that by my usual stretch/fold every 30 min 3 more times, but the dough, especially one with olives and tomatoes, never became elastic as I expected. I shaped it the best I could, placed into well-floured bannetons for overnight retardation in the fridge, then warmed up for 2 hrs in the morning before attempting to bake. Both loaves stuck to the banneton badly, the one with olives and tomatoes worse than the other one, to the point that both completely ripped when I tried to extract them onto the baking sheet.  I baked with steam for the first 15 min, and they did rise in the oven just a tiny bit, but nowhere close to be called loaves of bread.

I definitely learned my lesson; now I just need to figure out what that lesson was. :-)  Happy baking everyone!

is put in some add ins it should work fine.  I do it all the time - no worries.  I thion the problem you had was it sticking so badly.  Get some no glutenous rice flour, do not mix it with wheat flour.  Use it straight and nothing will ever stick again - if you use it!  Then your loaves will be beautimous!

Happty baking with no sticking

Yes, sticking was certainly a large part of it. I think I went up to 74% hydration too quickly, before properly mastering lower hydrations.  Adding too much stuff also didn't help the dough to stay together.  Finally, I am guessing that olive oil that was on sun-dried tomatoes - albeit probably no more than 1-2 tsps total - made that piece of dough more pliable, which also hurt my ability to shape it. Lesson learned: baby steps...

it's a learning experience, and not a failure!

A few things that you might want to think about for your next attempt with add-ins:

- be careful of the salt content (especially things like olives, sundried tomatoes, roasted walnuts...)!  The added salt can really wreak havoc on the timing of fermenting and proofing, and the subsequent structure (or lack thereof) of the dough.

- keep an eye on the weight and on the type of loaf that you are striving for.  I limit myself to no more than 30% of flour weight for non-grain additions, and no more than 20% of flour weight above that for grain-ish additions (toasted wheat germ / bran / altus / flaked grains) when adding to one of my more standard loaves.  For a foccaccia, though, or a highly enriched dough, or one where I'm using the add-in as the hydration (squash or potato or banana or yogurt) then the limits would change.

- love the suggestion of rice flour in the banneton to avoid sticking!

It sounds like these were still tasty, which means that you do still have the priority looked after - so now it's just a matter of continuing on with your practice until you get one of these complex loaves looking as good as your "daily".

I don't see where you state what your overall hydration is, nor what types of flour you used.  These are almost always good elements to include for help with diagnosis.

I'll side with Ice Demeter above.

I just recalculated my olive dough for 530g (your stated 460g + 70g).  I use 25% olives which brings my olives to 69g, right on target with what you have.  So you did not add too many olives unless you are playing around with high hydration.

You can try to drop the salt from ~2% to ~1.5%.  The olives should be dried so as not to add any further hydration than what you already assume you have.

By my count of your narrative, you did something like 6 or more S&Fs.  That is way too many.  Try limiting S&Fs to no more than 4 at the most.

Layering in the additions at the first S&F is what I do.  And this is how, so that you can see a way (just one way) to incorporate them.  Here it is with figs and pecans on the first S&F on a wetted surface - and not in a fermenting bowl.  Folded in thirds (the letter fold concept), then again in thirds the other direction, and then rolled up in the first direction: 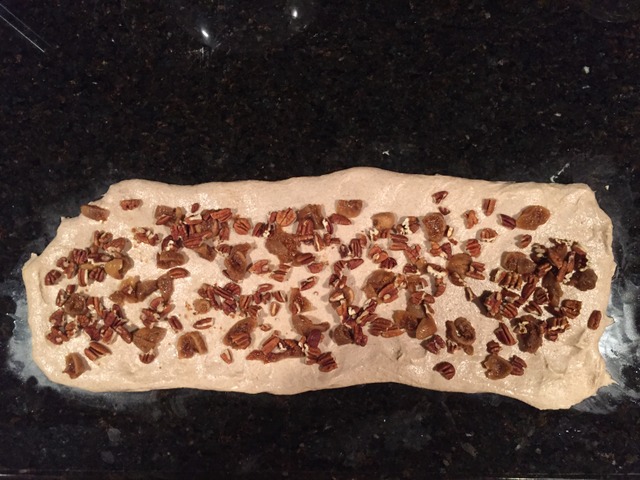 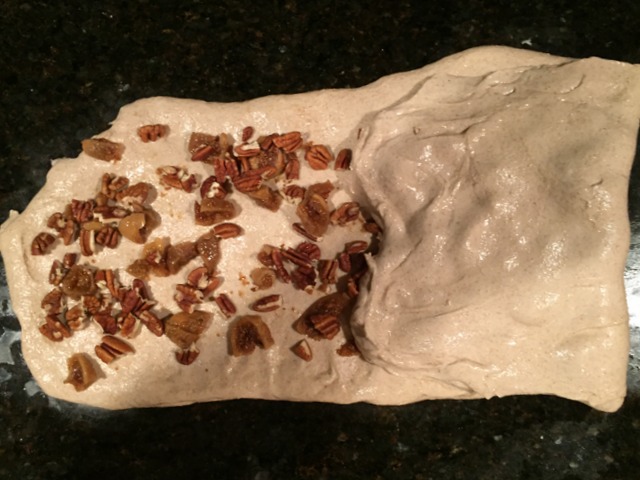 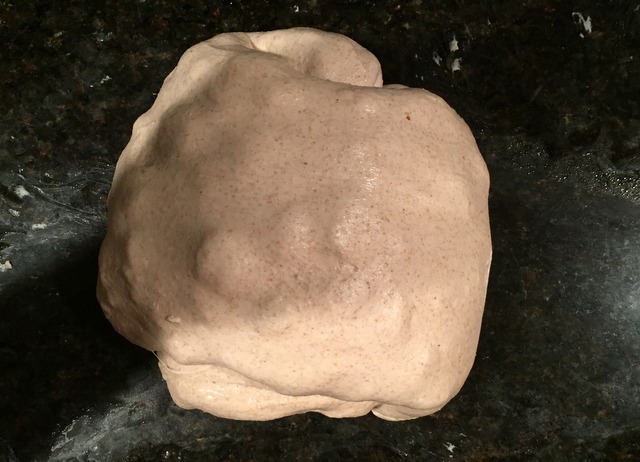 The sticking to the banneton thing is definitely a skin ripper.  Once the skin on the dough rips it initiates the start of a jailbreak for the yeasts within and destroys surface tension.

And you are correct in the idea that getting the bread down as the author intended is good practice a first  or second time.  Once you have that notion of how the dough behaves, it is certainly time to start making changes to suit yourself and to make it your own!

Thank you for the diagnosis and the pictures.  I'll provide some clarification, primarily so I can internalize the problem better.
- The dough (before any add-ons) was 74% hydration, including levain, made from AP unbleached flour while levain was built with WW flour. I reduced my usual 1.9% salt down to 1.7% for these loaves, but it's possible that still provided too much salt, given that both olives and sun-dried tomatoes contained salt.
- I incorporated ad-on ingredients using same technique as in the photos above.  The amount of stuff spread on top of the flatted dough looked about the same. The only difference was that after the first letter-fold I attempted to do it once again, not very successfully, because the extra ingredients made the dough not very pliable.  I then did 3 more stretch/folds with 30 min intervals, prior to the final BF for 2 hrs, so 4 stretch/fold sessions total, although the first session consisted of probably 3 individual stretch/folds. I agree that it was probably too many.
- I used some home-made rice flour on the banneton (rice in a blender, a bit coarse) mixed with AP wheat flour.  I'll try making that rice flour finer, and use it straight up next time.
- the ingredients and what they do to the overall hydration is what I don't know how to figure out.  I'll start with the easy one: walnuts and figs.  Walnuts were raw, I toasted them somewhat, so they probably didn't add much, if any water content.  The figs were dried, I just cut them up, and while certainly not as dry as flour, I wonder if they provide a lot of moisture to speak of.  The olives are Kalamata olives in brine.  I drained them and cut each into pieces.  They certainly still contain enough moisture, and next time I'll reduce dough hydration to somehow account for that.  They also contain salt, and I am not sure if my 1.7% in the dough was still too high.  I'll try 1.5% next time.  The sun-dried tomatoes come in a jar with olive oil.  The tomatoes themselves are fairly dry, but the oil on them probably changes property of the dough somehow.  They also contain salt.
As a rule of thumb - extra salt slows down the fermentation by inhibiting yeast reproduction, but it does not hurt anything else, is that correct?

Yes, salt is a preservative and slows down fermentation while adding flavor.

My thought about additions to dough and the hydration.

"Walnuts were raw, I toasted them somewhat, so they probably didn't add much, if any water content."

"The figs were dried, I just cut them up, and while certainly not as dry as flour, I wonder if they provide a lot of moisture to speak of."

"The olives are Kalamata olives in brine.  I drained them and cut each into pieces."

Thanks Alfanso.  This confirms my understanding of where I need to make adjustments.  I'll start with lower hydration, 71% or so, and will pat the ingredients dry, so they don't provide too much moisture.  I'll also probably reduce the salt to 1.7% just to be on a safe side with fermentation

Those ciabatta loaves from the video certainly look beautiful, but I don't think I am ready to handle the dough that wet. :-)

poblems are sticking related.  In the first hour you can do about as many stretch and folds and slap and folds as you want and no harm will ever happen.  Salt , even if you had tnotcut it back no - worries at all -  I do'lt cut mine back.  Oil that small amount is never an issue either.  It is just that you don't have enough experience but that comes very fast so buckle up and get some rice flour and never worry about this ever again.

and baking them at too low a temperature - they are very pale but it hard to see with all the flour on them,  Crank up the preheat to 500 F and gi e it 15 minutes to get the lagging stones up to temperature,  When the loaves go in, give them 18 minutes of Mega Steam at 450 F, Or DO,  and then take the steam out, OR lid off,and bake at 425 F Convection if you have it for another 12 minutes for an 800 g loaf.  This should get you to 208 F on the inside.  Get an instant read thermometer to make sure - no guessing but learn to nake bold - I bake to 208 to 210 F. but no more   My IRT cost a whopping 8 bucks and well worht it nbecsue you can use it for all of your other more in=mportant cooking too.

The last 2 loaves were baked at 460F with steam for 15 min and then further 20 min without steam.  I do have an IRT, but frankly didn't use it on these.  I personally would have preferred a bit darker too, but after 35 min, I was concerned that they would dry out.  Please take a look at my previous blog posts, and let me know if you feel those are underbaked too in your opinion.  Those were done at 475F under lid first for 20 min (oven was preheated to 500F prior), and then further 20 min more at 460F.