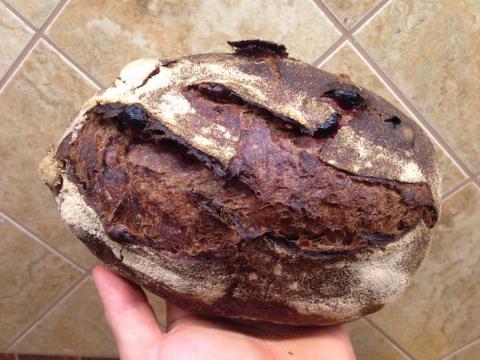 Tuesday's gone with the wind, along with 3 of my favorite loaves yet.

I was inspired by a recipe from The Perfect Loaf and decided it was time to change up my routine and add some more stuff to my dough. These loaves can only be appreciated by a baker. I feel like something has changed in my baking and it seems to have all come from this one bake. Have you ever felt that way? As if this is some kind of turning point and I see a bright baking future ahead.

Thanks to brdclc.com for the in-browser recipe calculator. This is my foundation formula that I work from when I need three 900g batards for dinner. By the time I add the levian the hydration is calculated to rise to 78%. 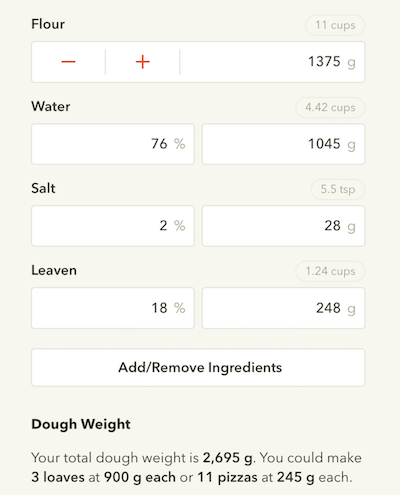 The process went on normally, or as a famous homebrewer would say "the day was uneventful."

5 a.m. Take out 40g from the starter culture and build a levian with 104g ww flour to 104g water. Our culture can rip through this percentage of food in about 5 hours. I'm currently trying to slow my culture down with smaller inoculations and larger amounts of food and it's not working. The soldiers in there are like Spartans.

9 a.m. Autolyse dough: two hours is ideal for me. Used water that is 100F so the dough knocks down to 90F, then goes to 80F at mixing. This recipe is dialed in and I know each addition is a 10 degree loss of heat. I added the cranberries and baked walnuts at this step. Incorporating the extra items in the dough is always easiest for me right as the water goes in. 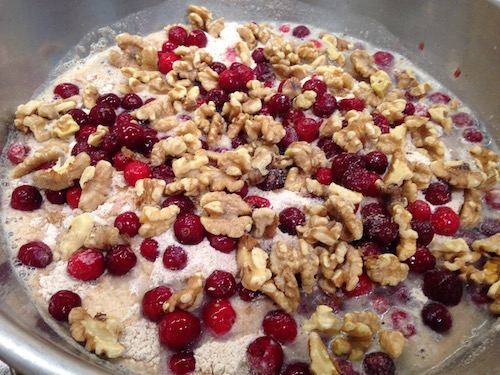 11 am: Add levian after autolyse is done, add salt, mix, rest for 30 min before first fold.  After mixing the dough was at 80F and remained there throughout the process until I raised the temp to 85F for the last hour of bulk. It seems that once I hit my target number, or any number for that matter, the dough holds temp extremely well. The levian is at 6 hours of work now and it is beyond active. The levian temp is about 81F. 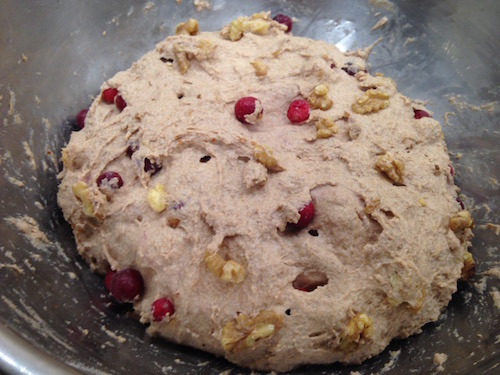 -11:30 am First fold  (when I say fold I mean really just one or two folds. Nothing serious, maybe 10 seconds of dough contact.)

-Dough rested until 3:30 because I didn't see an excessive amount of fermentation. Sometimes I don't see the real ferment progress until I flour the top of the dough and start dividing and shaping. All of a sudden there's CO2 ebullition from within. I also gauge how my last fold felt. Was it airy? Easy to pick up and let go? Who knows.

3:30 pm Divide and preshape. Each loaf was 900g but the extra items weighed more. I didn't measure for that but I might want to in the future...which is in two days. So each loaf came out to about 950g.

The loaves relaxed on the counter until 4pm. Then I did a final batard shape, just some simple rolls and folds and presses and into bannetons. They proofed next to the preheating oven for about 30 minutes. A few poke tests and I noticed their springback slowed down to half way, so I baked then. I also was running out of time as dinner was coming up and I needed some time for cooling too. 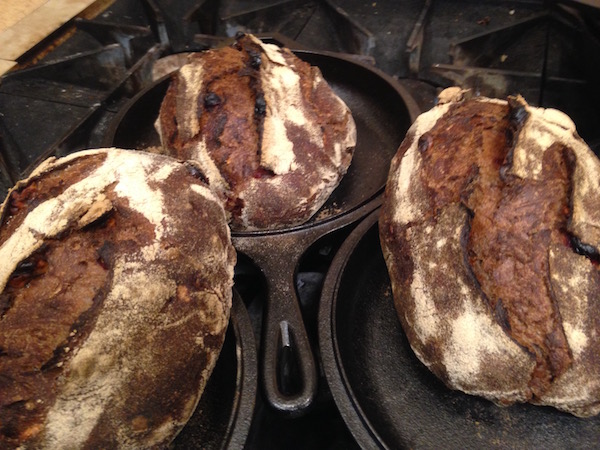 Baked at 400F in dutch ovens for 40 minutes, took lid off at 40 minutes and baked another 15-20 minutes and just watched the color. Since Dabrownman started to talk about stout the other day, I wanted to bake these loaves dark and stouty.

The crust was awesome. Thin, crispy, and really easy to slice through to the bottom. It was sweet for the first time in all my bakes, sweet and chewy but also crispy at the same time. Wow. 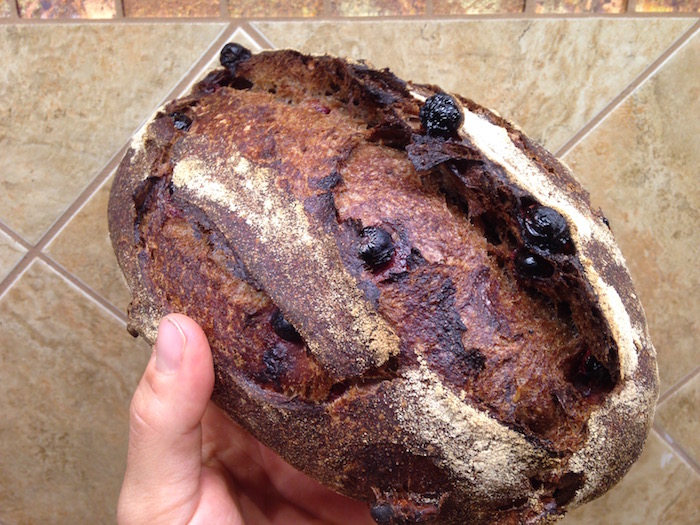 The crumb baked well and dry, but still having a moist spongy character. No tacky texture even though I sliced the loaves about 20 minutes out of the oven. I'm finally getting my bakes proper with these dutch oven pots and proper temp control thanks to Derek's help. I would never make beer without measuring the temp at each stage, so why would I ever make dough without measuring temp? 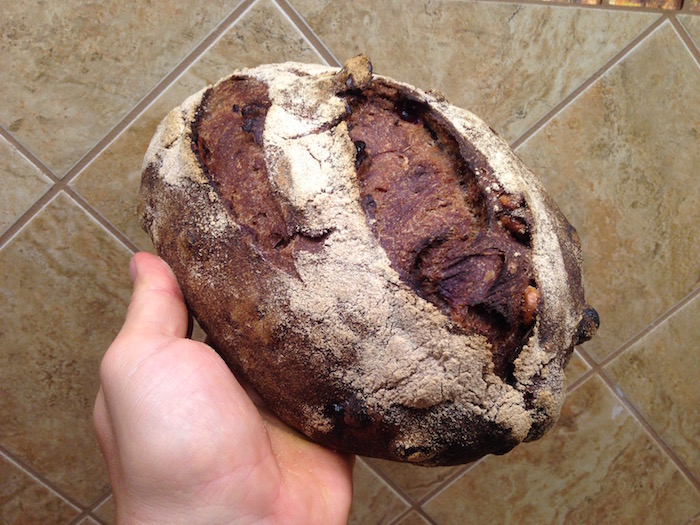 I thought scoring them would be more difficult, but it was fun. I have been doing the same middle or side horizontal score for the last 20 loaves so I got out of my comfort zone and did something different for two of the batards. I love how they came out all craggy and wild.

I still can't believe how great these turned out, and now they are all gone. But that gives me an opportunity to do it again... 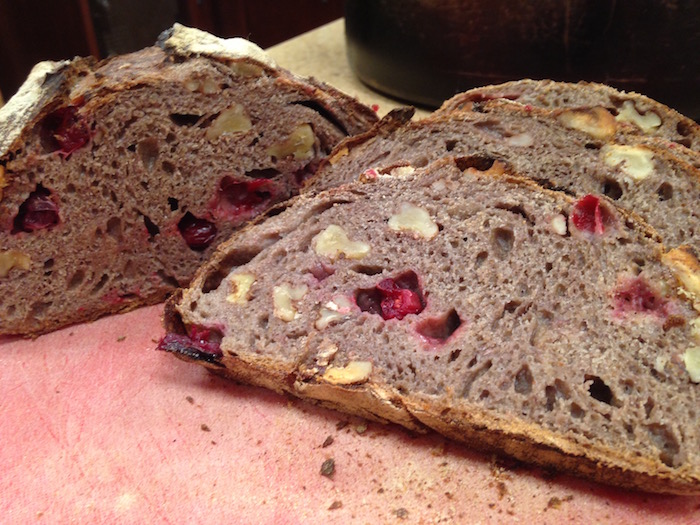 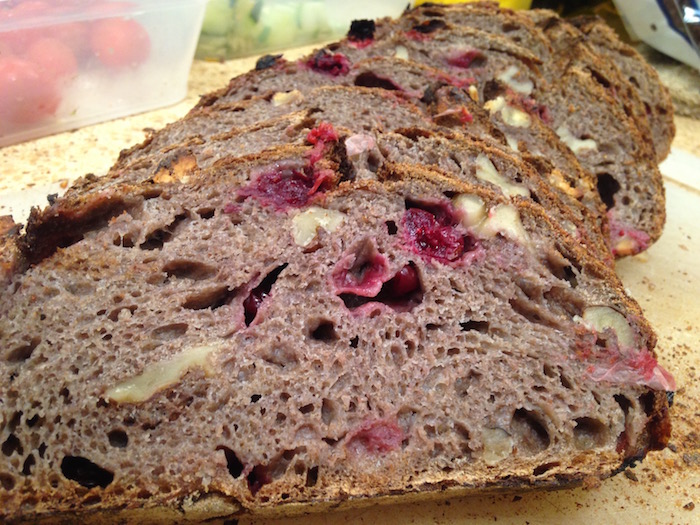 It looks like you used fresh cranberries ... did you?

I, too, prefer to mix my add-ins right at the beginning with the water. It's so much easier that way.

I know they must have been delicious if they are all gone already! Well done! Can't wait till your next bake!

right out of the bag. Thawed in water.

These look great! Are they 100% whole wheat flour?

I made a similar loaf for several years and ate it often for breakfast as it was hearty and delicious. I used dried cranberries and I added Cardamom and Coriander. Such perfume when it toasted!

Beautiful loaf and I may have to try your method.

The berries and nuts are really a new thing for me. Last night I made blackberry and pecan sourdough with onion and mushroom soup, with a side of kale and cottage cheese salad. Worked well.

as always, thanks for being such a regular around here and helping us beginners.

Well done Yogi they look great I bet your brother monks were well pleased with those.

If you are wanting to end up with a specific amount of dough its quite easy to calculate you take your formula for any given dough add up all the bakers percentages you then divide the desired amount of dough weight by the figure you got from the total percentages it will then give you the value of 1% for the dough you then apply that to each of the ingredients in turn.

multiply all those formula bakers percentages by 7.7g

So this can be done with any dough formula that is expressed in bakers math and really quite handy if you are breaking down a commercial quantity for the home baker or vice versa.

Derek, asking you "what do you know?" is like asking a tree "how much sap runs through you?" Endless

thanks Yogi, just useless information for most but  very useful if you are needing an exact amount of dough, which is what you might need if you are doing test bakes or a number of test bakes and prefer not to have waste.

love this combo of ingredients.

Your crumb is quite spectacular for a 100% Whole Wheat loaf with solid ingredients. Congratulations!