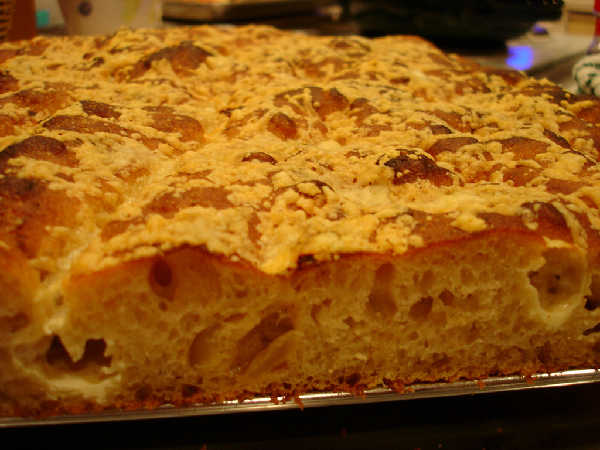 I spent the day making a couple of sourdough focaccias and a miche that is similar to the Thom Leonard Country French recipe in Artisan Baking by Maggie Glezer. The recipe for the focaccias follows.

A spread sheet in xls format and html format for the dough is posted, which has amounts in ounces and bakers percentages, percent of fermented flour and other possibly useful information. Some photos of the process are posted, as well.

These focaccias use a small amount of instant yeast. Olive oil seems to significantly slow the activity of the sourdough once it is introduced in the dough. The fermentation in this recipe runs long enough before a large amount of olive oil is added to the dough to allow the sourdough flavor to develop.

Let the levain rise overnight until at least doubled. It can ripen a few more hours after that without changing the results very much. The levain is designed to rise for 12 hours at 70F. At 76F it might take 8 hours to be ready and at 65F it would take about 15 hours to be ready. If the levain is ready before you want to mix the dough, refrigerate it when it has about doubled, and it can be used 1 or 2 days later.

You could easily use all bread flour for the white flours in the dough. This is just what I did due to finishing some bags of flour. I usually use 50% AP and 50% high gluten flour in this dough.

I mixed the dough in a DLX mixer at low/medium speed with the dough roller attachment for 5 minutes, and let it rest a few minutes. Then I split the dough in half. To one half I added a box of golden raisins - about 15 ounces, and mixed the dough for another few minutes to further develop the gluten. The other half of the dough was separately mixed for a few more minutes.

Each half of the dough was allowed to rest about 1/2 hour and then poured out on the surface and folded a few times and each was placed in its own covered bowl to rise.

Each dough was folded about once per hour over the course of about 3.75 hours and was at about 75F. At 70F the bulk fermentation should run longer, maybe 5 hours. The dough should become puffy and soft over that time. How much it rises is hard to tell, since it is being somewhat deflated during the foldings that are done once per hour.

Sautee 1/4 inch on a side pieces of chorizo or other salty, firm sausage in olive oil until they render some of their fat and are somewhat browned. They will cook more in the focaccia, so they shouldn't be sauteed so much that they become hard. Roughly chop most of a large onion and 4-6 garlic cloves. The onions should end up in strips about 1 inch by 1/4 inch. The garlic pieces should be about 1/4 inch on a side. Sautee with some red and black pepper (maybe 1/2-1 tsp, depending on how spicey you want it). Sautee the onion and garlic until tender and translucent or beginning to brown. Chop up fresh mozzarella, about 1/2 pound into about 1/4 to 1/2 inch on a side chunks. Also have on hand enough shaved or shredded asiago or parmesan or similar salty flaked dry cheese for topping the savory focaccia. Drain the sauteed ingredients well and spread out on the counter or place in refrigerator. They will need to cool to room temperature before being pushed into the focaccia.

Line a 1/2 size standard tray (about 17x13x1 inches) with parchment paper. Grease the parchment paper with olive oil, about 1/4 cup. Place the dough on the parchment paper and patiently press it your fingers starting from the center and working out to the edges. If the dough will not spread out, let it rest a few minutes, and continue pressing it out. Don't squeeze it with flat palms, only press straight down, dimpling it with your fingers. With patience it spread out over the whole pan. Don't worry too much about filling the corners.

In the case of the savory focaccia, as you spread it out, drizzle about another 1/4 cup of herb infused olive oil on top. Also, once it is reasonably spread out, begin to work in the sauteed ingredients and the mozzarella cheese. Push the ingredients into the dough with your fingers. Continue to patiently push all the ingredients down. At first they may pop back up or remain on the surface. After a while the puffy dough will begin to envelop them. Every few minutes for the first hour of the final proof, continue to press in the ingredients.

In the case of the raisin focaccia, just let it rise for the first hour, while pressing in the ingredients in the savory focaccia. After an hour, press the raisin focaccia down with your fingers, working across the entire dough surface.

Cover both focaccias with plastic wrap and allow them to proof for another 2.5 to 3 hours at 75F. If they become very puffy, remove the plastic wrap and gently press them down with your fingers. The dough should be puffy, evenly risen across the whole pan, and at about the height of the top lip of the pan or a little higher. Poke any big bubbles that form with your fingers while pressing down the dough.

Before the raisin focaccia is baked, sprinkle 3/4 tsp of salt evenly across the surface. Use your fingers to pinch the salt and carefully spread it over the dough.

The shaved, flaked, or shredded asiago or parmesan cheese should be sprinkled over the savory focaccia when it is within 5 minutes of being taken out of the oven during the bake.

These focaccias were baked in a brick oven that had been brought to a hearth temperature of about 550F and allowed to cool down to about 510F. The air temperature in the oven was about 425F. They baked for about 15-20 minutes, first in the pan for 5 minutes. They were then scooped out of the pan with a peel and placed directly on the oven floor. If I were doing this in my kitchen oven, I would bake in the pan for about 20 minutes in an oven with a stone preheated for about 1/2 hour to 450F. It may help to gently scoop the focaccia out of the pan onto a peel and drop it directly on the stone, but is not necessary. I sometimes notice a second oven spring when I drop them directly onto the stone.

The sourdough flavor goes well with both the raisins and the savory flavored focaccias. These focaccias are favorites among family and friends and are regularly requested.

That looks incredible. Foccacia never much caught my eye, but this savory version looks fantastic.

Nice to hear from you. My freezer finally ran out of bread after doing a lot of baking in September and early October. This is an old favorite I had not baked in a while and had not posted in the blog, although I've mentioned the idea a few times here on TFL. This recipe is requested often but not frequently fulfilled, as it's harder work than most other recipes, with the folding, sauteeing, and pressing in of ingredients. However, it is a delicious recipe and worth trying at least once. It also depends how much you like the sausage in it. You could omit the chorizo and substitute chopped vine ripened tomatoes or olives, or some other firm, salty, or spicey ingredient, if the chorizo or other sausage or ham isn't appealing.