Miche with Spelt and Rye Levain

Miche with Spelt and Rye Levain 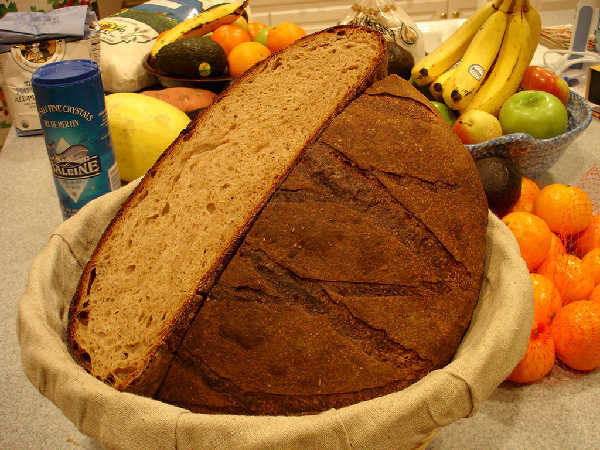 Zolablue, a frequent TFL contributor, encouraged me to try the Thom Leonard Country French recipe in Artisan Baking by Glezer. This recipe is a variation that incorporates some of the things I have liked in other miche recipes. For example, I am using Heartland Mills Golden Buffalo flour as the main flour, but spelt and rye are added in the levain, and there is some additional whole wheat added with a soaker. The hydration is lower than most of the other miche recipes I've tried or blogged here on TFL, which gives it a slightly more regular, dense crumb that is excellent for sandwiches or for holding honey or any wetter toppings. It is a robust texture, as opposed to a very light, irregular, open structure.

Spreadsheets in xls and html format are posted with weights in ounces, bakers percentages, and other possibly useful information. Some photos of the process are posted, as well.

The soaker was mixed the night before and allowed to sit on the counter overnight at about 70F. Refrigerate unless you plan to use it within 12 hours.

The dough was initially mixed/kneaded in a DLX mixer on low/medium speed for about 8 minutes. It was allowed to rest in the mixing bowl for about 1/2 hour and then kneaded in the mixer for another 5 minutes. The dough was dropped on the counter and folded into a ball and placed in a rising bucket. It was placed in a warm area, about 76F, for the bulk fermentation, which should run about 4.25 hours at 75F. The bulk fermentation should take about 6 hours at 70F or 8.5 hours at 65F.

The dough is fairly firm with the very water absorpent Heartland Mills Golden Buffalo and whole rye at a 79% hydration. At this consistency, the dough is stiff enough that it resists much folding, so it was folded only once about 1.5 hours before shaping.

A boule was formed and allowed to sit on the counter for 10 minutes to seal the seams. Note, the loaf doesn't rise by double during bulk fermentation. The loaf was placed upside down in a lined round wicker basket style banneton dusted with a mixture of semolina, rice, and bread flour. The loaf was also dusted with the dusting mixture plus a small amount of bran. The basket and a bowl of warm water was placed in a Ziploc "Big Bag" and allowed to rise for 3.5 hours at 75F. Allow 4.5 hours at 70F for the final proof or 6.5 hours at 65F.

The boule was turned out on a piece of semolina and corn meal dusted parchment paper on a large peel and slashed with a cross-hatch pattern.

This loaf was baked in a brick oven after some focaccias were baked, as noted in another blog entry recently. The hearth temperature had dropped to about 485F, and the air temperature was about 425F. The oven was steamed using a very fine garden sprayer designed for orchids (1/6 gal/minute, by Foggit) and sealed with a towel covered wooden door for 15 minutes. It was then rotated and sealed with a metal door thereafter for a total bake time of about 1 hour. The hearth temperature dropped to about 445F at the end of the bake.

To do the same thing in the kitchen oven, I would use a stone and preheat the oven to 500F and steamed according to your favorite method. I use a cast iron skillet and place a special can with a small hole drilled in it with about 1 cup of water that dribbles out creating steam in the oven for about 10 minutes. I drop the oven temperature to 450F for the first 15 minutes, immediately after adding the water, and then drop the temperature to about 400F or lower, for the rest of the bake, monitoring the crust color and dropping the temperature further to avoid charred crust.

Allow to fully cool on a rack before cutting.

This is a great loaf for any juicy ingredients, or things like honey, mayo, and whatnot. It's more dense and chewy than other miches I've blogged on TFL. It has a nutty, toasty, and slightly sweet flavor, I believe due to the spelt, and is a little crunchy due to the crisp thick crust that has a little bran encrusted in it, and maybe also from the added whole wheat.

I'm curious, do you find that the levain changes character that much when you build it with spelt and rye from such a small amount of white starter? Also, when you do breads like this, do you use active starter for the seed (10g) or is it storage starter from the fridge?

I use active starter that has been refreshed a few times at room temperature and has doubled and then some, so it should be near its peak strength. However, you could use starter out of the refrigerator if not too old, probably less than a few days, and stored around the point it had doubled. If you store starter right after being fed, then I would take it out of the refrigerator enough ahead of time to let it double and then some before using it to build a levain. You can use starter that is weaker, since the inoculation is small and the rise time is long, allowing the starter to balance out in the levain, but the rise time for the levain would then be more uncertain and possibly hours longer.

I've liked aroma and flavor when using some spelt and rye in whole grain breads, which I think you like to do, too. At some point a while back, I made a large levain with spelt and liked the aroma. The flavor of breads I've made with spelt starters just seems good to me, but maybe I'm imagining things. I haven't done any side by side tastings. However, I find the breads get a little dense if I use too much spelt, but maybe I need to fine tune the hydration and handling approach. I haven't tried using as much spelt as you used in your 100% Whole Grain Sourdough Bread blog entry.

I'm not sure I answered your question about the changing character, so let me know if you were getting at something different from what I responded to above.

I know this is supposed to be about the bread, but gosh what a pretty picture.

I'm glad you liked the photo. The engineering photos are available elsewhere, but I've tried to rise to the occasion and provide something presentable in the blog entry. The standards around here on TFL are sometimes very high, like in "The Scent of Apples", for example.

Bill, so good to see you back here, buddy.  I miss your very in depth posts and great recipes.  Reading about this bread is makin' me hungry for it!  One of the reasons I wanted my DLX so badly is exactly for the Thom Leonard Country French and darn if I haven't even made it once since I got that mixer.  Now I have to make Glezer's recipe and this one, too.

I finally tried your method of mixing the levain earlier in the day and refrigerating it rather than finding myself up at midnight or 1:00 am mixing one up.  I let it double before refrigerating, which usually takes about 4 hours.  But it never rises anymore in the refrigerator, in fact, it then sinks back down to the starting level.  Is that correct?  It still raises my bread very well when I mix the dough the following day but just wondering if I should be allowing it up warm up and rise again.

I'm so used to letting the levain sit out for many hours and it often has tripled or more.  I'm not sure if that is supposed to happen but with my starter it always did.  I was very surprised the first time I used a refrigerated levain that had only doubled and saw how well it worked.

Beautiful bread, as usual, and thanks for posting this.