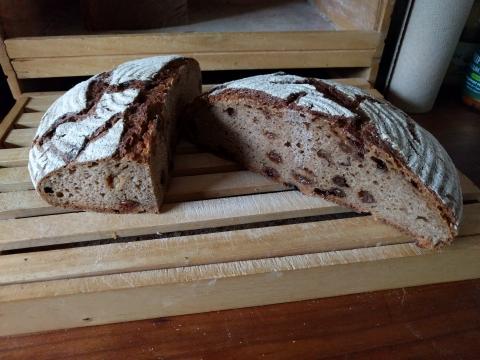 Bernard Clayton Jr's The Breads of France, Daniel Leader's Local Breads, and Joe Ortiz' The Village Baker each offer formulas, recipes, and lore on European bread. The authors, all from the USA, published their books between 1978 and 2007 after travels in France, Italy, Germany, Czechoslovakia (as it was then), and Poland. In recent weeks I've been concentrating on French breads from these books, specifically pain campagne and pain de seigle.

The latter, the rye bread, has been an interest and a challenge of mine for a long time. As a kind of merging of influences from those books, I produced the rye and raisin loaf pictured here a few days ago. This is the formula I used:

I made the leaven using a stiff 100% rye soudough I'd started a week or so before to make one of the French ryes from The Village Baker. The leaven for this rye and raisin loaf fermented overnight, for about 14 hours. The raisins soaked separately overnight in their own weight of water.

Using a sieve I captured the water not bloating the raisins to use as part of the water for mixing the dough. There was something like 23g of that raisin juice to sweeten things a little.

For the mix, after taking the 41g of chef from the leaven I added the raisin juice and the rest of the water. Next came the all purpose flour. Using a bamboo rice paddle I stirred in the all purpose flour and then the whole wheat flour. The batter was just thick enough to work vigorously in hopes of activating the gluten. Next I worked in the rye flour. Once the rye was thoroughly incorporated the dough rested for 20 minutes or so.

After the rest period I worked the dough by hand in a bowl using techniques from Flour, Water, Salt, Yeast, and Tartine Bread. These consisted of alternately squeezing the dough body between splayed fingers and thumb for a while and then stretching and folding in the bowl several times. A windowpane test isn't really possible for dough with this much rye flour, but the mixing is done when the dough feels smooth and somewhat extensible, if not really elastic.

Primary fermentation lasted just an hour, followed by shaping into a boule and proofing for four hours. To bake the loaf I preheated a cast iron Dutch oven on a middle shelf of our kitchen range to 480° F. Once the loaf was in the oven in the oven, I set the temperature to 450° and baked for 30 minutes. At this point, the top came off the Dutch oven and the baking temperature was set down to 425°. After 20 more minutes I turned off the oven, took the bread from the Dutch oven bottom, and placed on that middle rack of the now-cooling stove for ten more minutes.

I managed to wait until the next morning before cutting into the loaf -- not the recommended 24 hours, but the temptation was considerable. As intended, the raisins nicely balanced the rye tang. There was enough wheat flour to give the crumb a bit of lightness. Making 1/3 of the wheat flour whole grain meant that 82% of the flour used was whole grain. My wife much prefers whole grain bread, and I much prefer my wife!

I've made a loaf with raisins and rye before so I can imagine how tasty this is. Yum.

That's an appetizing loaf! I have never tried rye with raisins. Both are good so this one means super good!

It looks like you are married long enough that you know what your beloved wife likes. I am semi retired as well and my biggest relaxation is baking bread.

I am currently in northern Germany in Hamburg working as a consultant for almost two weeks. Looking just the pictures of your loaf I can feel that typical rye taste that your bread has. Would really love to taste it and feel that special flavor the raisins add. I can get here a lot of excellent rye bread but still I am convinced that we can compete with all of them besides the fact that they are so good!

Thanks, Joze. Indeed, my lady and I are together now 30 years. We've changed planes in the Hamburg airport a couple of times and once caught a train to Bremen there. We haven't had the pleasure of exploring the city itself, though.

I've had various rye breads in hotels in Lower Saxony, Switzerland, Vienna, Prague, and Poland. The French rye breads I've made from books are different in their various ways. What pleased me about the bread I was writing about here is that I estimated more or less correctly about the proportions in the formula. The result was nicely balanced.

That travel experience results from the part-time work I've had in recent years. Very lucky to have the opportunity.