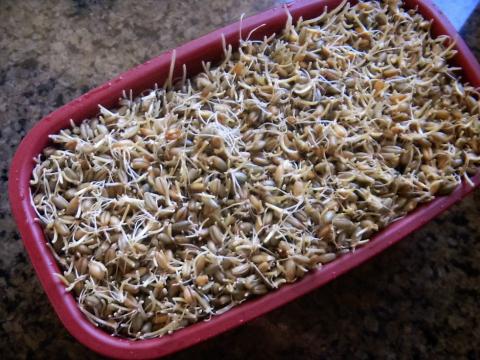 Instead of spending 5 days making a loaf of bread this week Lucy and I made a batch of Red Rye Malt - which takes just as long -5 days.

All you have to do is sprout rye berries or about 4 days or so until the shoot, not the 3 rootlets that come out first, is at least as long as the seed itself.  The rootlets will be 5 times that long by then.  Then you dry the malted berries over about 5 hours at 105 F. 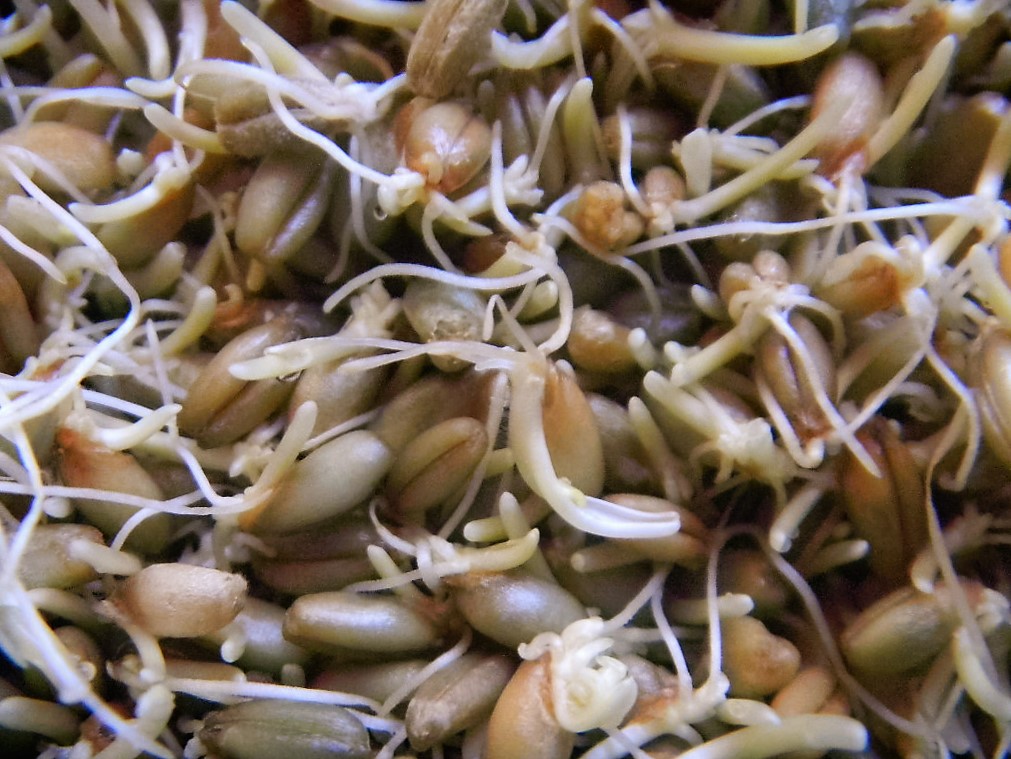 This gives you the option of using some of the berries for white malt if you grind them up them or taking them and dry roasting them in the oven at 325 F for about 30-40 minutes until they brown up nicely and then grind them into red malt.

Since we sprout grains and use them in most of breads and the white lour we buy is already malted, we con't have much use for white malt but we do use a lot of red malt in out breads of all kinds - not just rye breads. 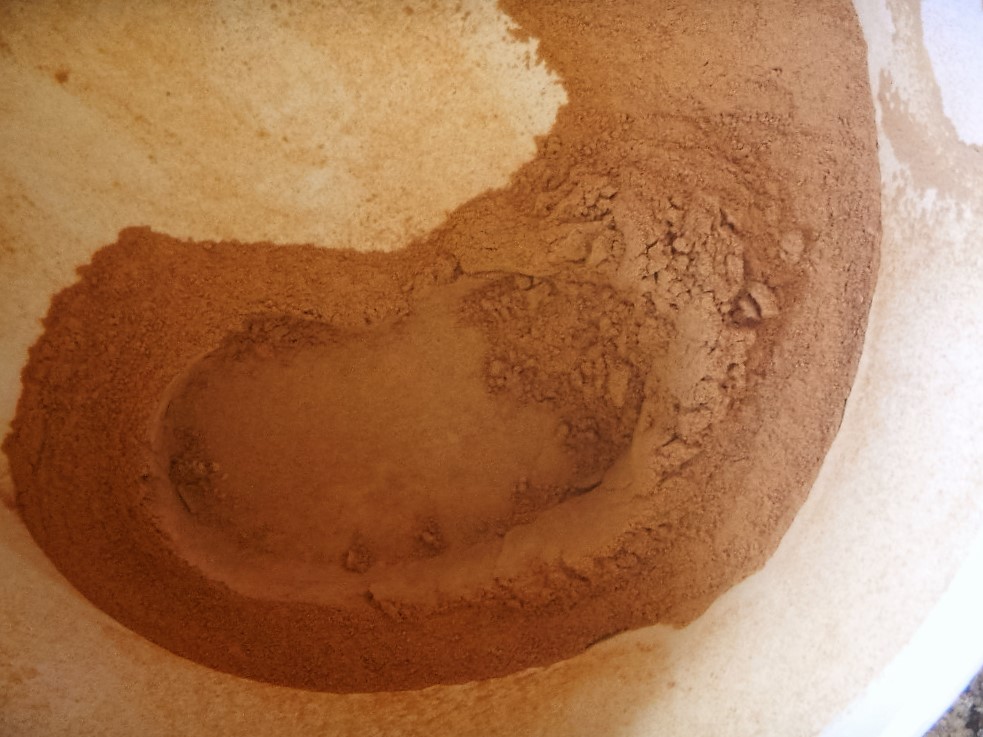 So this batch ended up being entirely red malt - one of the greatest bread additives for color and flavor ever invented ...... possibly by alGore:-)  The cost to make 200 g of red malt was 60 cents including the berries and electricity used.  If you include Lucy's time, the dehydrator, the mill and alGore's royalty fee, then it costs just a bit less than a million dollars!

If you dry roast this in a pan till it is twice as dark, you have chocolate malt.  Some if this batch is destined to become chocolate malt for a really dark pumpernickel some day.

It's like an alien nation has invaded your kitchen!  How cool.  Very inspiring!

that include other ways and white malt

Quick harvest for this crop of rye! Thanks for sharing the process.

How long will it take you and Lucy to use this amount? How do you store it?

breads and twice that amount in baked scalds for rye ones, it goes pretty fast but we put it in the freezer to keep it fresh since it has the germ in it even though it has sprouted.  The smell of it is intoxicating.

Hope your apprentices are well and happy baking Cathy

in your posts. I had no idea how malt was made. Question though: Is this malt the same stuff they used in malted milkshakes and malted Easter eggs?

By the way, I hate the taste of those so if it is, it is definitely not something I will put in my breads If it is.

Malted milk powder has barley malt in it but it really doesn't taste anything like red rye malt.

The only piece of equipment I am missing is a way to bring the roasted berries into flour. Would a food processor work to get it fine enough to put into bread?

Question: What does the malt do to the loaf? You said in an earlier comment that you'll use about 10g, that seems so tiny.

dabrownman
September 7, 2016 - 9:39am
For white flour where white diastatic malt is added back

into the mix after sifting out the original malt that was in the bran, they put back about 6 tenths of 1%.  Red malt is a bit different in that it is very powerful in both flavor and color.

I usually have about 400 g of flour in the my breads so 10 g is 2.5% (more than salt) and 20g for rye breads would be 5%.  For rye breads I would toast the malt farther to the chocolate range and for pumpernickel I would put it into the baked scald too.

Once you use it you will see how powerful it is.  That isn't to say some folks don't use more in their breads.  I want it to enhance flavor not to dominate the taste.  It is sort of like Toadies.  I love them as a flavor enhancer but don't want to use so much if them that the taste of the grains is overpowered.

I like to put a bit more red malt, as a percent,  into white breads since there isn't much flavor to enhance in the first place - but we don't make much white bread