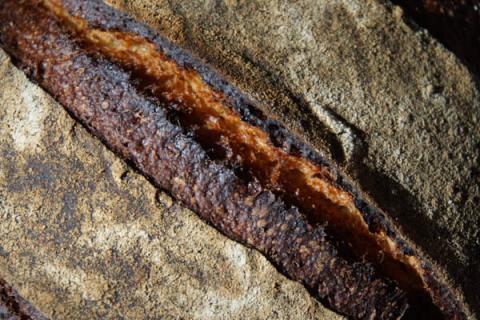 This weekend's bake was a bread with honey in it. I decided to try to get a honey swirl in my bread by flattening the dough, smearing some honey on it and rolling it up. Since honey is 17% water, I thought I'd make a paste to equal the hydration of the dough. 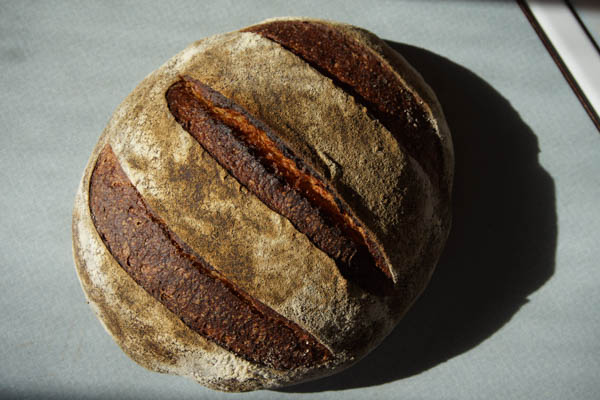 This recipe is based on David Snyder's Sourdough from San Francisco Baking Institute's Artisan II class. I think this recipe is PERFECT for Beginner Baker II students as it's complicated enough to stretch your brain but has enough detail that you can't get lost. 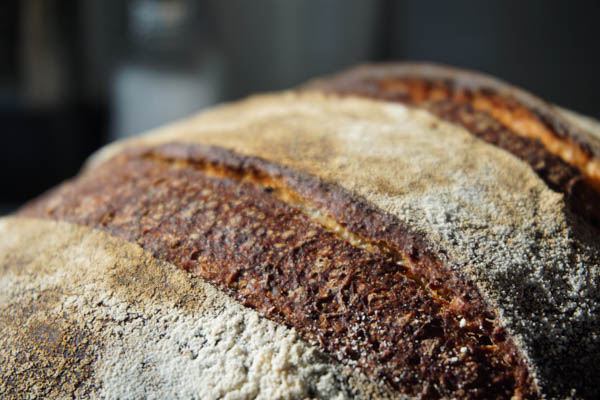 I deviated by using 350g King Arthur all-purpose flour, 100g whole wheat, 10g spelt, and 77g rye. I autolysed the flour for about an hour and when mixing in the levain, I adjusted the hydration with lemon juice by adding a tablespoon or two. 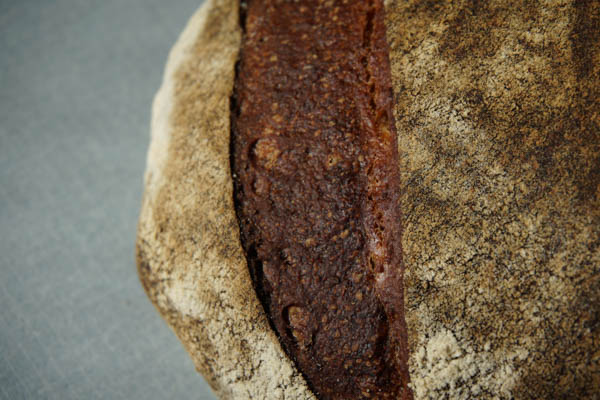 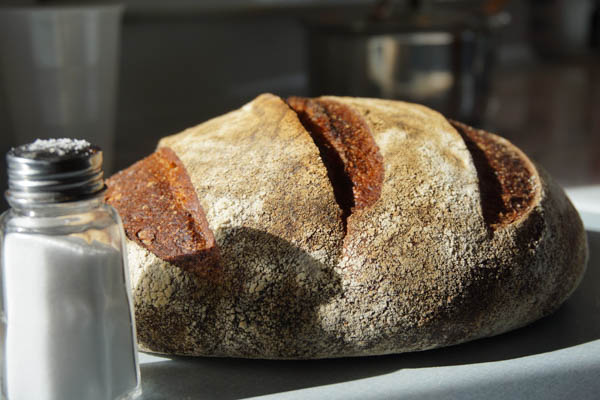 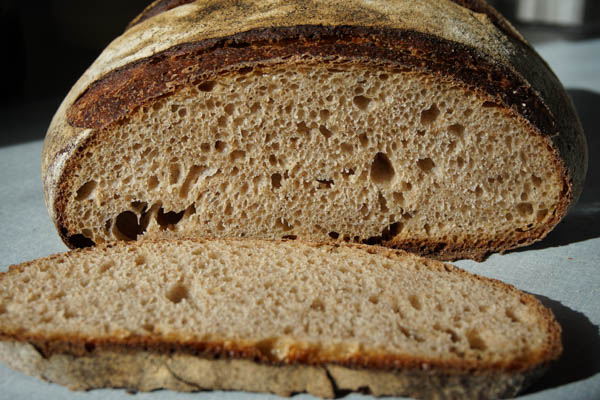 You can't believe how crest-fallen I felt. Here I was, a new baker challenging old hands to a honey bake and failing miserably. I just wanted to chuck the whole pile of honey and dough into the trash can. Everything was so sticky - the dough made even moreso by all that honey. 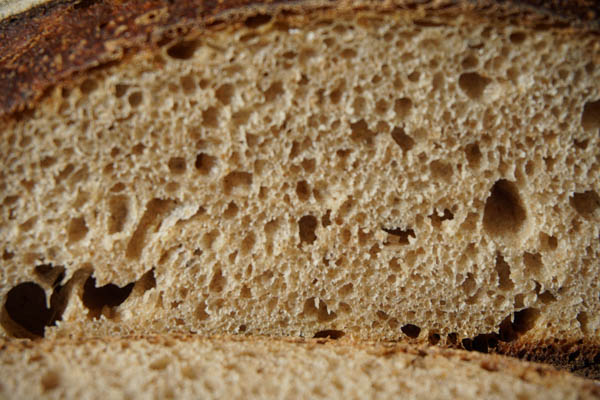 With the dough and honey running all over the place, I decided that I'd at least practice doing some slap and folds since I really haven't had a high hydration dough in my sourdough journey. If nothing else, this mess would be put to good use with practicing technique. I can't even begin to tell you how slaps and folds work with a goodly amount of honey in it! I pressed on and, wouldn't you know it, that dough came together!! I was SO SURPRISED! 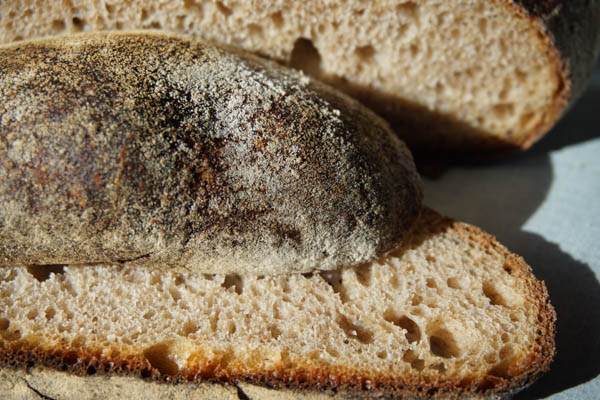 So, in for a penny, in for a pound... I pre-shaped, rested for 30 minutes or so, and then shaped into a very firm boule - like a meatball. Very tight. I was pretty angry at myself and didn't really care about the bread. I thought it would be trash but at least I got some technique practice and, you know, everything must bake. I pre-heated the Dutch oven to 500ºF, plopped the dough in and turned the oven down to 425ºF for 12 minutes. Removed the cover and baked for five minutes. I removed the loaf and baked on the stone for another five minutes. I then let it go 10 minutes in a turned-off oven with the door ajar. 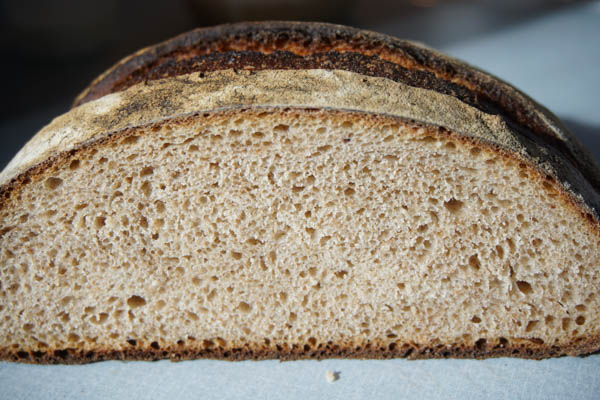 My friends, I'm pleased to report that this is my BEST bread so far! The crust was so deep and dark; that same mahogany color that I see all the time on TFL. The crust went soft as it cooled so that it was more chewy than crunchy but the toasty-caramelization was unlike anything I've ever tasted. Kind of salty-sweet, dusty with a little charcoal tang. The crumb was soft and tender but with a little tooth to let you know that this was a special bread. It tasted so wheaty with rye highlights. I was surprised that I didn't taste more honey but it was there in the background and came out in the aftertaste. For me, THIS is what bread tastes like! I'll never go back to store-bought again.

What a great bake and story to boot!  That's pretty funny about trying to incorporate the honey but I'm glad you didn't chuck it out :).

Here's a funny, disaster to surprise success story for you.  I was baking a challah bread to bring to some friends for dinner and just as I was about to bake the dough I realized I forgot to add the butter!  Well, you can't have Challah without butter or some type of oil so I decided to add the softened butter to the middle of the dough. It was oozing out all over the baking pan in the oven but ended up tasted amazing.

Thanks the the kind words, Ian! I always forget the salt and wind up with a gritty stretch and fold, never quite sure if it's properly incorporated.

I was reading dabrownman's blog index where one baker just kept giving up, never really baking the dough to see what happens. He stayed with the thread, helpful as always, and kept reminding the baker to put the stupid thing in the oven.

Towards the end, he gave his usual helpful tips but signed off with "good luck getting the dough into the oven." I was roaring! I'm still chuckling!

Nothing like a little stick-to-itiveness to get out of a sticky situation.

That's  beautiful bread. Kudos for staying with it!

Thank you, Paul, for noticing my bread. All you old hands like Ian and the gang are so generous with your time.

I was afraid that I bulk fermented too long with all that sugar and then the proof went two hours and more. But, surely and steadily, the dough kept puffing up in my handkerchief-lined salad bowl. I was so surprised that the meatball had anything left to give!

The poke test sprang back in a lively manner but an indent still remained. I probably could have gone another hour but I wanted to keep some kick for the oven given how rich the dough was. I think I got it just right and will remember this lesson for everything it taught me.

Congratulations, Murphy, your bread looks wonderful! I'm definitely with the 'bake it anyway' team. You took a chance, encountered resistance, didn't panic (okay, maybe thought about it briefly), but forged ahead with Plan B, and darn if it didn't turn out better than you thought it may.

Enjoy every slice of your Honey Challenge Bread. You're a baker!!!

Boy, it sure feels good to get past all the starter worries and the "is that what it's supposed to look/act/smell/feel/etc. like?" stage. Now I can play around with all kinds of different things and even fit it into my schedule!

It's a whole new world of bread waiting for me and I'm pretty excited about it!

Thank you for your encouragement!

What an awesome rescue story! I'm pleased it worked out well for you :)

Looks great, i love the bold bake. That crust must have been super tasty!

Thanks, Ru007! I love following your bakes. You're among so many of the people here who are so generous with your time in sharing your success stories and lessons learned.

That crust really makes the bread. It's like the top of a muffin. If we could only have muffin tops and skip the fluff, the world would be a better place. :)

Of course, it's Seinfeld! I'm glad to see this bread place isn't entirely devoid of culture.

This honey bread is making me thirsty!

That is one of my favourite episodes :)

Now all we need is for someone to make a marble rye or a chocolate/cinnamon babka, and we’re good to go!

as I was reading your post! So glad you didn't give up!

I still have to come up with my version but I still have too much bread in the freezer so it is going to have to wait a bit. And it doesn't help that the daughter and hubby are too lazy to take the bread out of the freezer so they each bought a loaf. I could have choked them!

You should have seen me try to slap and fold globs of dough in a pool of honey. New guys like me complain about sticky dough but this was a particularly angry kind of sticky. Honey doesn't respond well to a dough scraper. It kind of just smears it around and then dries a bit and taunts you.

I was flinging dough against the toaster, scraping it off the wall and "incorporating" it into the dough. As if... Richard Bertinet my eye! With his smug little shrug like it's so very easy... Pshaw! Every time I slapped and folded I could just see him there... smirking his French smirk. I beat him! Like a rented mule! Hah! Bertinet...

I got issues, you know?... :) I need university-level help! Like a TEAM of doctors looking into my case...

I gotta go now. I need a slice o' bread... thank you for your encouragement!

The first thing is to remember is that honey i\;l't 17% water - it is more like 65%.  That is what I use to figure hydration due to honey in recipes.  The other thing to remember if you aren't adding the honey in when mixing then you need to spread it out and add a bit in during each slap and fold rather than all at once :-)  This is true for nuts fruits, seeds etc. If you dump everything in all at once it will just be a mess.  You learn these things after cleaning up the floor and ceilings with all the stuff that slapped there!

But all is well that ends well and this one came around to finish well enough to be one fine looker - inside and out.  Very well done and happy baking

Most honey has a moisture content of 17-18%.  Only a little higher than that and the honey will spoil.

Nice pick-up on the Bertinet mention! :) ...With apologies to and reverence for a skilled baker and said in a spirit of fun and playfulness that I hope goes understood by all.

I think 17% water is about right for the honey but it's affect on the dough was like adding 65%! Man, it acted like acid on the dough. It was an immediate collapse and penetration. Honey was flowing through the dough like lava from an open seam in the earth. It was running all over my hands and through my fingers the more I tried to control it.

And then I reached for the bench scraper. BIG mistake. I needed another scraper just to pry it off the counter when I put it down after realizing it was only making matters worse.

Hah! What a riot that day was! It's why whiskey was invented.

Ahhh... dabrownman... I've been DYING for you to see my bread! You're so over-the-top helpful to me and everyone here. I wanted you to see that your help wasn't for naught. It came out pretty well, huh? Thank you!

I did those slaps and folds in your honor. Likewise, not giving up and baking it through. I certainly went to Gugglehumph Land because I saw that you did it and was none the worse for the wear and tear.

So that's how you insert your add-ins, huh? Like love-making... don't be all macho-man... easy does it... just a little at a time and everyone's happy...

Finally Murph, you are officially off the schneid!  A lot of work went into it, so it must feel really good. too.  Congrats.

Thanks, Alan! I think doing those twelve loaves back to back and one after the other a couple of weekends ago really paid dividends. There's no substitute for experience and even better if you rinse and repeat right away so you don't forget what you just learned.

I watched a video from a bread school, probably SFBI, where they make their students rip through 300 pre-shape and shapes before they get to bake a single loaf. Just bang, bang, bang until they learn how to handle a dough.

That practice thing is like magic. So is learning from folks like you. Thanks for being here!

Finally Murph, you are officially off the schneid!  A lot of work went into it, so it must feel really good. too.  Congrats.