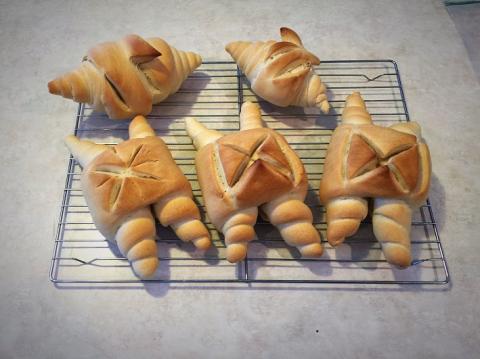 A very good friend of mine is originally from the Boston area. During a recent conversation he told me about what he knew as "Star Bread". He says it is one of his favorites from back home, and that he hasn't been able to find it anywhere else.

If you try to Google-Sleuth information about this bread, you will find that it is quite difficult to dig up any solid information about it. Most results are from folks with a similar nostalgia who are looking to find Star Bread somewhere... anywhere. I did find this other TFL post very helpful... much thanks LarAl.

After I spent some quality "Indiana Jones" time on the web, I discovered that what folks from New England refer to as 'Star Bread" is actually a variation of something also known as "Italian Horn Bread". Which, in turn, is an Americanized variation of an old bread making method and formula that originates in Ferrara, Italy. An example of this bread making method is Coppia Ferrarese. A bread steeped in rich Italian history and heritage.

Since the method and formula for this bread is wrapped up in Italian regulations, most of the information that I dug up had to be translated so that I could understand it. (Thank you Google Translate.)

Here is a site with a decent formula for Coppia Ferrarese that has been translated into English...
Traditional Sourdough Pork Fat Bread: the "Coppia Ferrarese".

I followed this formula somewhat closely. My only changes were that I (1) reduced the bakers measurements, (2) used a 56% hydrated biga (pre-fermented for ~14 hours) and (3) used vegetable shortening instead of lard (pork fat).

After formed, and allowed to proof for a short while, the loaves were baked at 425F for ~25 minutes.

The attached photo above is of my finished product.

I gave a couple of the loaves to my friend and he was pleasantly surprised. He said that the texture and flavor was spot on! However, he does remember that the loaves were larger, so next time I will double the formula.

The dough is very stiff. I had to let it rest quite a few times while I worked with it. In addition I sprayed it with water a few times to keep it pliable and supple. I think that next time I will use a 100% hydrated poolish as the preferment. This will allow a bit more hydration for the final dough.

The hunt for this bread was a blast, and was very fun to make!
But, more importantly, I got to share with a good friend a small taste of "home".

Thanks for the video link

I grew up on the East Coast but never saw "star breads."  Such fun and imaginative shapes!  The star is nice and I like the roll with the cut edges which bakes up into a fringed top.   The links you posted are very helpful.  I have enough Italian to understand perhaps 1/3 of the narration my first time through the video.  Just watching as the baker's hands work the dough is amazing. This is on my list of breads to try.   Happy Holidays Jeff!

Thanks for this recipe sharing!  My great-grandparents came from the Amelia Romagna region of Italy and they brought this wonderful recipe with them.  My grandfather had his own bread baking business in Wellesley, MA for about 40 years.  He kept many families supplied with his homemade bread, even through tough times when many could not pay.

My father helped out in the bakery making what we know as "four corner" bread.  Unfortunately, my grandfather never wrote down any recipes and they have all been taken to the grave with him.  I can't wait to try this recipe to see if I can replicate this wonderful bread from my childhood.