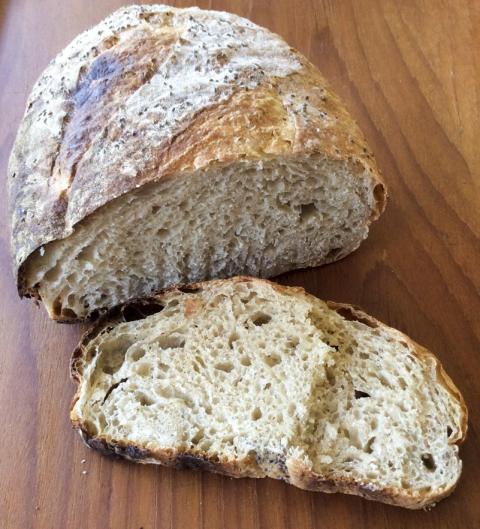 Simple ingredients, fermentation and fire - there is definitely something satisfying about all that. And your bread looks to be as tasty as it is pure. And you've got your timing worked out to your advantage - nice.

Hi Cathy - you expressed it perfectly. As fun and delicious as things can be (not just bread) with lots of fancy extras the simplicity seems to touch another part of us.

Bringing out the most flavor out of the grain: pure, simple and delicious... but difficult! I wish I can do breads of this kind half as good as yours. I don't have an oven or a grill but I keep finding ways to make bread because I love it; some of my ideas can be quite crazy. Here's my best attempt so far... http://www.thefreshloaf.com/node/41534/double-cooked-crusty-lean-loaf

That is impressive! I will have to read through all of that again. I think you have a good system going, I am sure you will perfect it. It is easy to forget for those of us with ovens that are great for bread, that not everyone has one. Thanks for the kind words and the link. Good luck and I will be watching your progress.