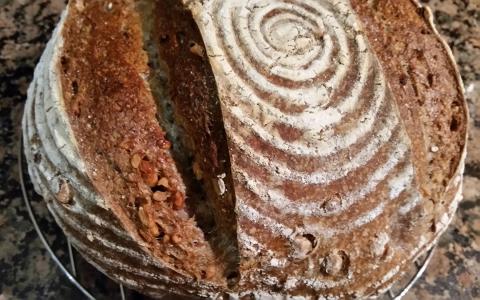 This is so yummy, I just had a slice with just unsalted butter and OMG it is so tasty * if I say so myself *

The flavour is amazing,the sour with the sweetish yet earthyness of the walnuts... 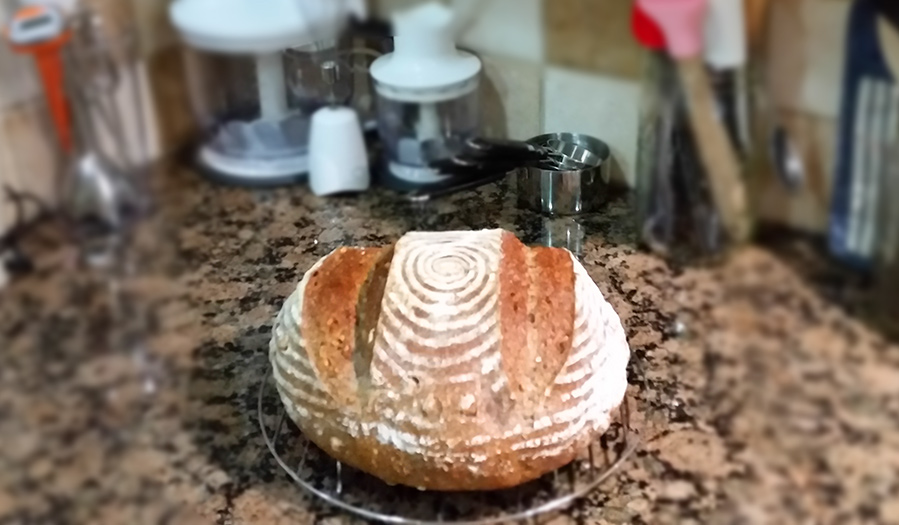 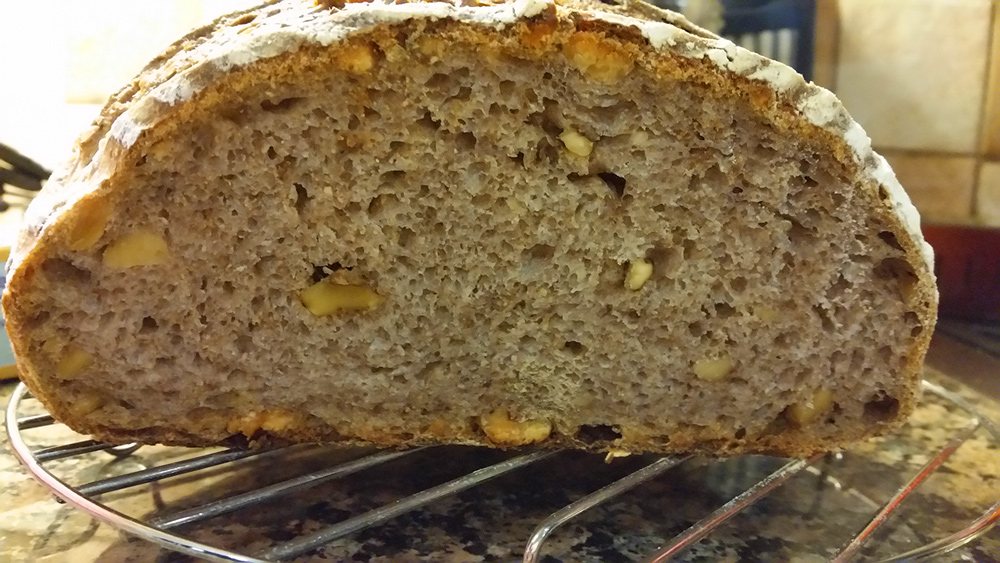 115 g ready to eat Walnuts *which I put in the food processor to make them smaller.*

I put everyting in the bowl of my kenwood chef premier to knead for approx. 13 minuts on 2 * which is low *

Formed the dough into a boule and put into a  bowl and lid on , let it sit at room temperature for 2 hours and put it in the fridge for 10 hours.

In the morning I degased the dough , shaped into a boule, put in floured banneton , wraped loosley in a cotton kitchen towel and put in a plastic bag and off it went in the fridge to proof for 12 hours.

Managed to let it cool before slicing * but it was still ever so slightly warm :)*.

Unsalted butter on and yummy in my tummy :)

Looks amazing!  Perfect crumb and crust for this type of bread.  I love walnuts so I'm sure I would like this one.

This bread is certainly a winner in my family:)

It tastes great with Apricot Jam :)

toasted with butter and  apricot jam on it - don't make it ever again:-)  The crumb on this one is especially nice soft and open.  Well done and Happy baking

loves most food and ALL the bread that I bake * that is labrador for you * but today, I gave him a slice of this one, he was happy, took the bread and gave it one chew  spat it out and left.

The utter disapointment in his eyes. rofl

My Border Collie Eddie always lets Ben have the first bite of all that is new, so he left me too without even tasting. pffff

From the humans in my house I got the thumbs up:)

That might be walnuts.  Some dogs react to them or have had a bad experience with a bad nut.

husband and kids loved it too, was gone in no time.

I think next time I make a double batch.

Reg. my dogs reaction to the walnut, I just googled it and never knew this about nuts.

OOo... that looks great, Petra. Would you mind if I featured this one on the homepage for a bit?

Yes, go ahead, I am so happy that you asked:)

What a beautiful loaf, crumb and crust.  I'm with you on just a slice with unsalted butter. (my mouth is watering)  Congrats on the front page... nice "eye candy."  I think I'll add this one to my to-bake list.  That list is getting long... I better get to baking more bread.  Great job.

I really loved baking this one, the smell from the oven , I was drooling while I was waiting for the bread to cool down:))

This bread looks amazing!  Will try to make it.

It really tastes great, there is one proofing in my fridge for tomorrow. yummy

This walnut bread looks really great, congratulations Petra!  Its been a while since I made a walnut bread, now I feel inspired to bake one!

I bake one tomorrow,it is proofing in the fridge right now.

That looks really great - I am sure it went fast.

It really is one of our fav. Sourdough breads.

I am so looking forward to tomorrow when I bake it again, it is proofing in the fridge right now. * drooling *