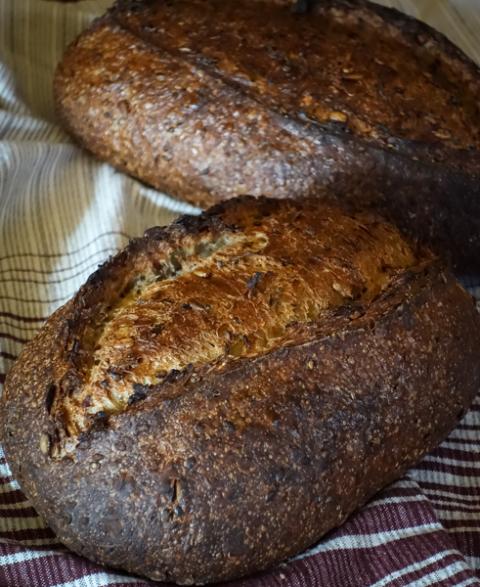 Hamelman's 5-grain Levain is one of our favorite breads.  My wife and I always have some on hand in the freezer (it freezes quite well), ready to toast a slice for breakfast or for a sandwich.  It also lends itself to all kinds of variations since it is easy to modify the ingredients and relative amounts of the soaker.  I have used cracked rye (as called for in the original recipe) and have also had success with bulghur wheat.  This time, inspired by this post earlier this year, I tried it with freekeh, something I just recently discovered.  Freekeh is green durum wheat that is lightly smoked, so I was hoping to impart that smokey flavor to the bread.  Another variation this time was when making the levain, I doubled the amount of the seed starter, shortening the fermentation time to reduce the acid formation and yield an overall sweeter bread.  The two loaves were retarded in the refrigerator overnight and baked after resting at room temperature for an hour or so. 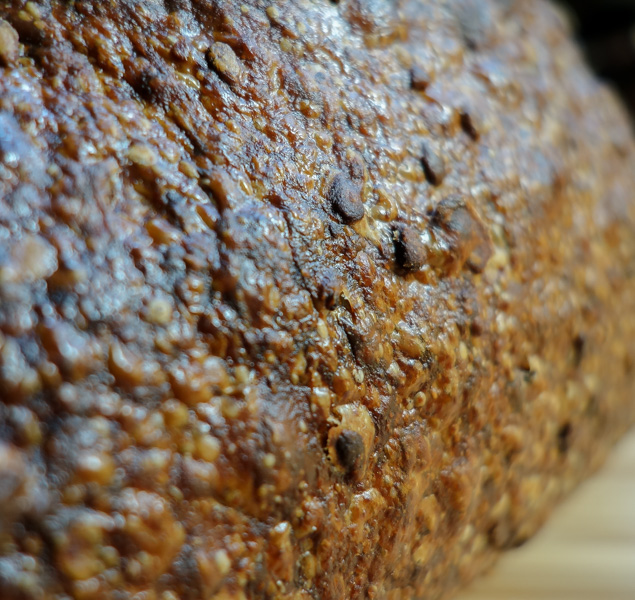 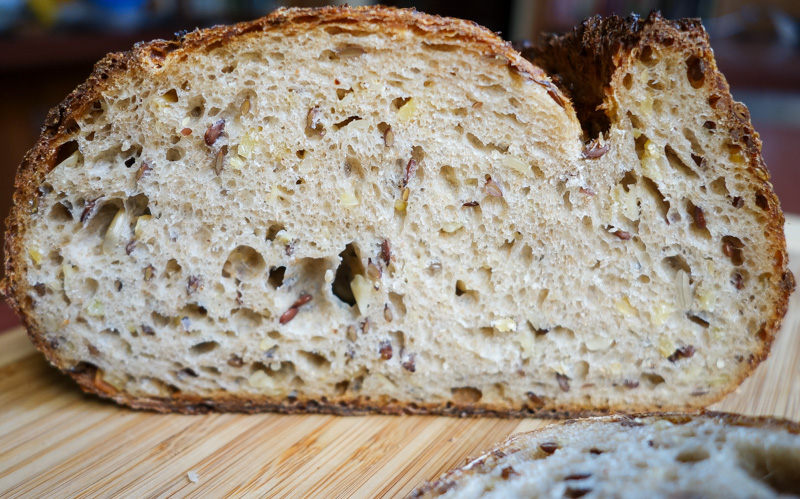 The bread is really delicious, although the smokiness is not as pronounced as I had hoped.  The sweetness nicely complements the dark caramel of the crust.  I will make this again and probably increase the amount of freekeh in the soaker for a more smokey character.

Brad:  Great crust, shape and crumb.  Very nice.  I am sure you will be making this bread with new variations over time. I really love the five-grain and have made it many, many times with multiple variations. I've attached the link to a seven grain I made earlier this year.  Thanks for sharing and good luck when you try the version with more freekeh.  Best,  Phyllis

I appreciate your comments.  And thanks for pointing out your post since for some reason I must have missed it.  Seeing your photo of the soaker makes me think that this bread might like a sprinkling of oats and sunflowers on the crust, too

Beautiful crust on those loaves.  So did you use the freekeh whole or as part of a soaker or ground into flour?  It sounds like it might be worth giving it a try soon myself.

Thanks for the comments. I dusted off the KA grain mill attachment and ground the whole freekeh very coarsely, almost like chops or #4 bulghur.  I used it in the soaker in place of the rye chops - direct drop in with no changes in amounts, but, as I said earlier, I would put in a bit more next time to add more smokey flavor.