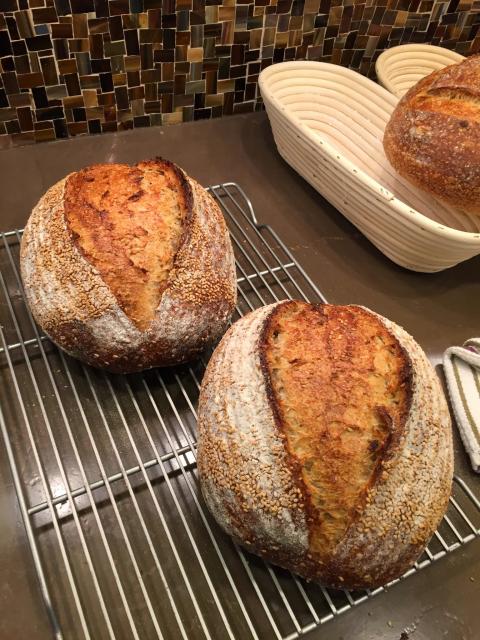 The past few weeks I’ve had a chance for some good weekend baking, and below are the latest results.

I started off on a school night trying Kenji’s take on focaccia, not so much for the recipe composition as the easy technique (simple overnight rise, baked in a cast iron pan).  The results were surprisingly good – really nice crust & crumb, 1 to 2 inches thick, easy to slice in half for sandwiches.  The crumb flavor was a bit bland/simple – not unexpected with an instant yeast build, a bit like Jim Lahey’s no knead bread – so I might experiment a bit with a longer retard process in the fridge and/or introducing some levain, but for a “night before,” easy bread to go with a dinner or sandwiches, this was a very good method. 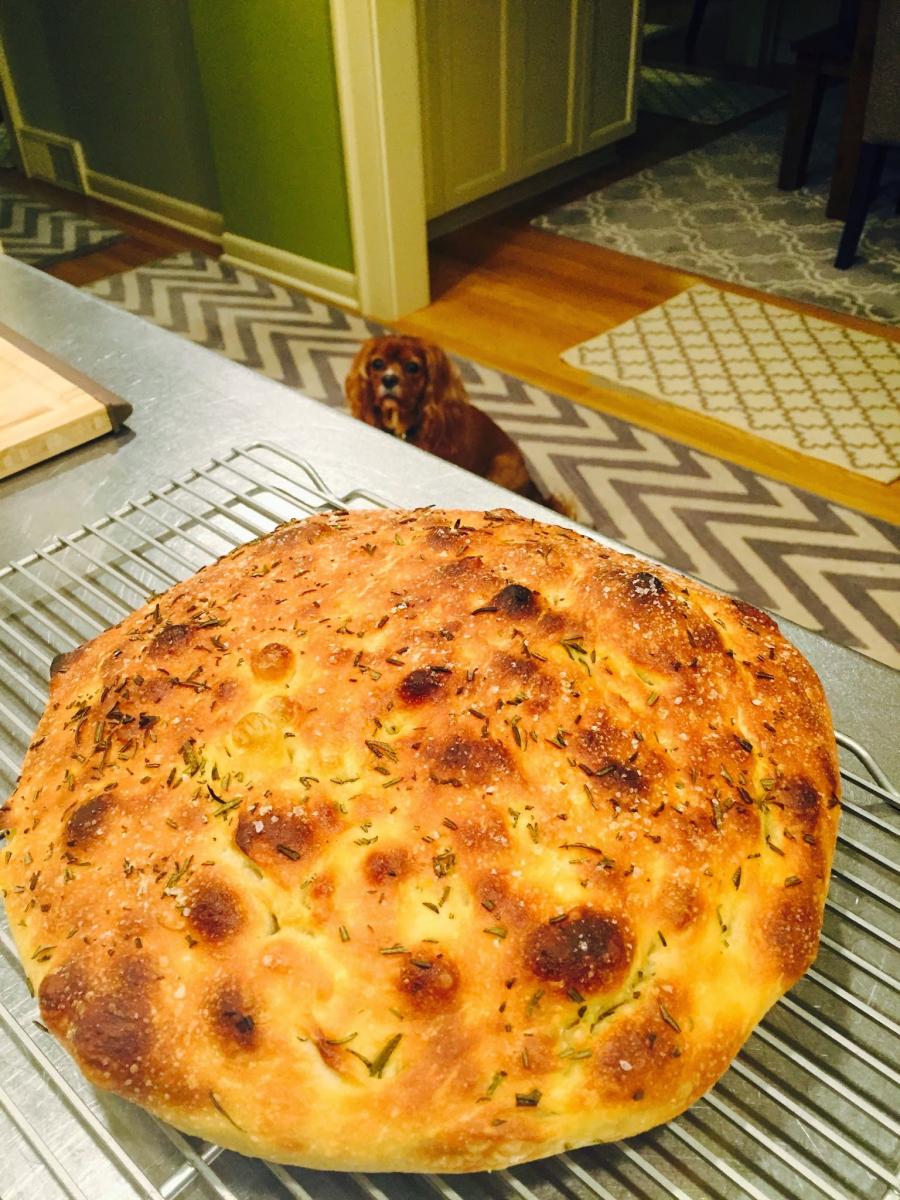 Next I made a batch of Field Blend #2, from FWSY, as I’m trying to get more into rye recipes, and this was an easy step.  Loved the flavor and crumb of this bread – I made a double batch and gave it to friends who similarly raved.  I’m starting to understand the complexity (and stickiness) rye adds, which is fun. 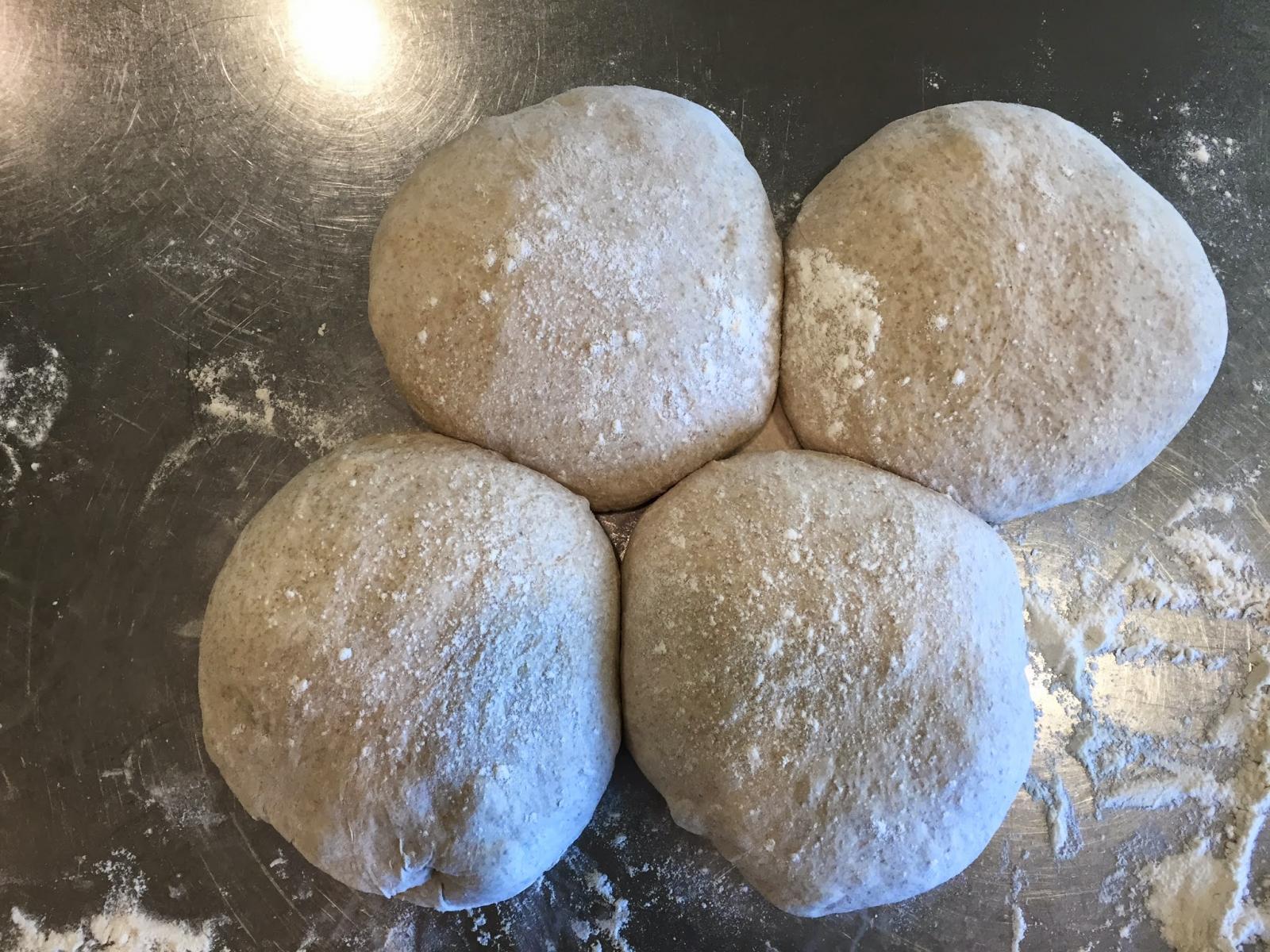 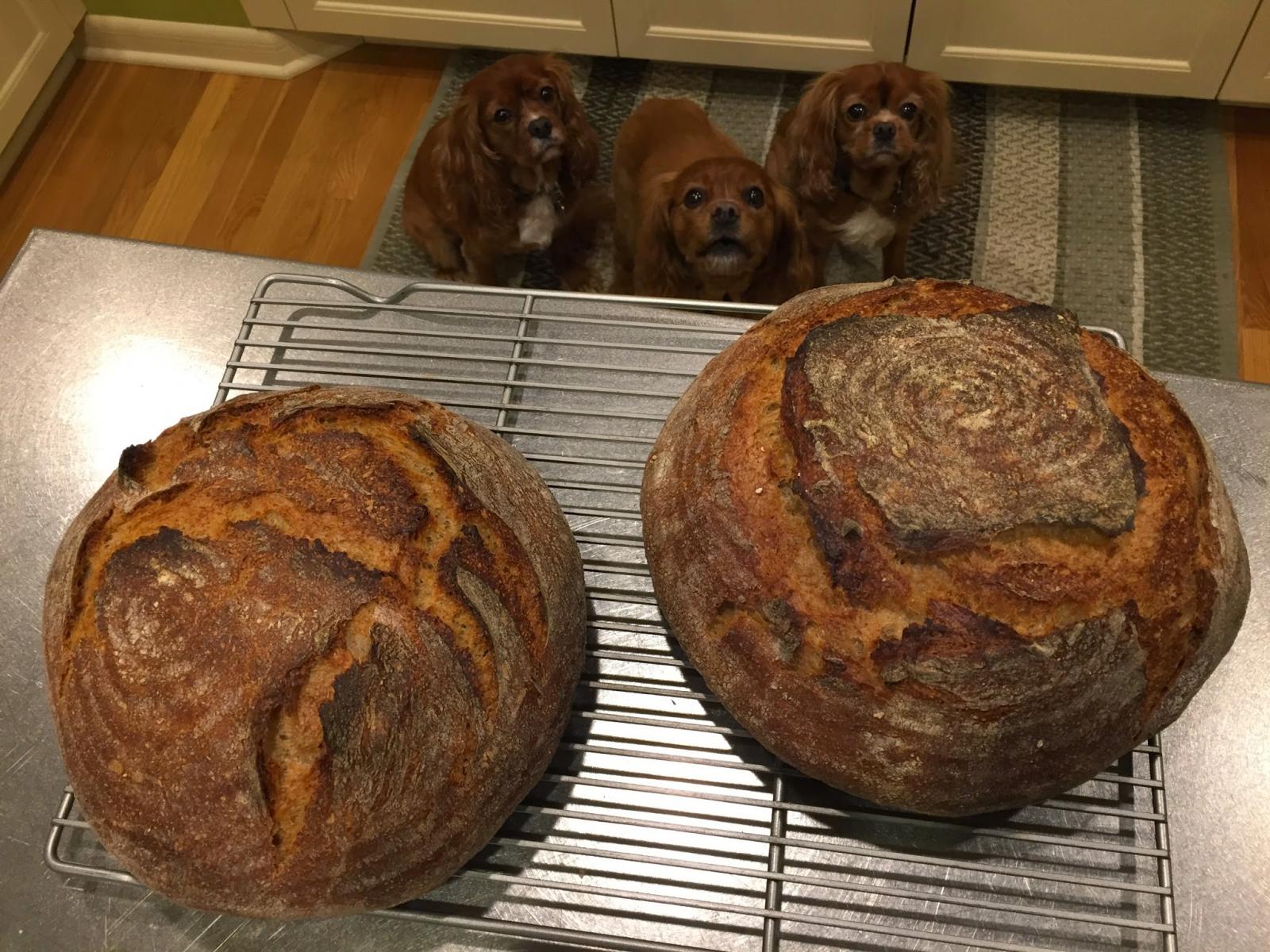 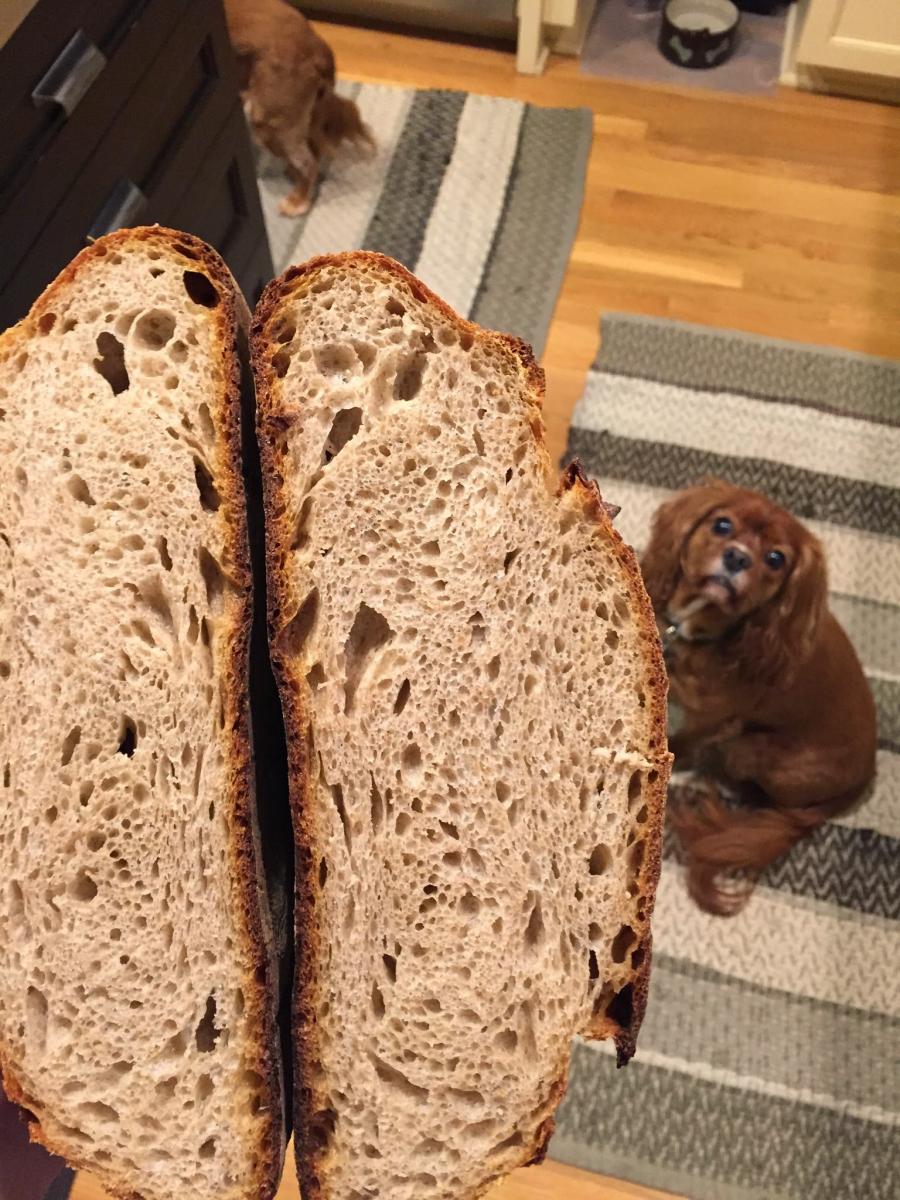 I then built on the Field Blend #2 recipe by adding toasted sesame seeds, inspired a fellow TFL user (I think) and his great, if dormant blog.  The results were stellar – one of my favorite loafs in a while – as I really loved the flavor and dimension added by the toasted sesame seeds.  It takes everything is different direction than my normal levain breads – nutty and savory – I think it would be amazing toasted with cheese. I’m going to keep on this one, and will try adding toasted sesame into other breads to see how it goes (bonus: it’s much easier to make and incorporate sesame seeds than some of the poridges I’ve been trying).

One further note, I baked these loafs free form on my baking steel.  It produces really great oven spring (and I was heating it up for pizza later, so it was efficient).  One thing I have to watch, though, is over cooking the bottom of the loaves – they got a bit darker than I might normally like, which I suppose is because of how efficient steel conducts heat, but was curious if others had a similar experience? Could be as easy as inserting something in between halfway through the bake, perhaps… 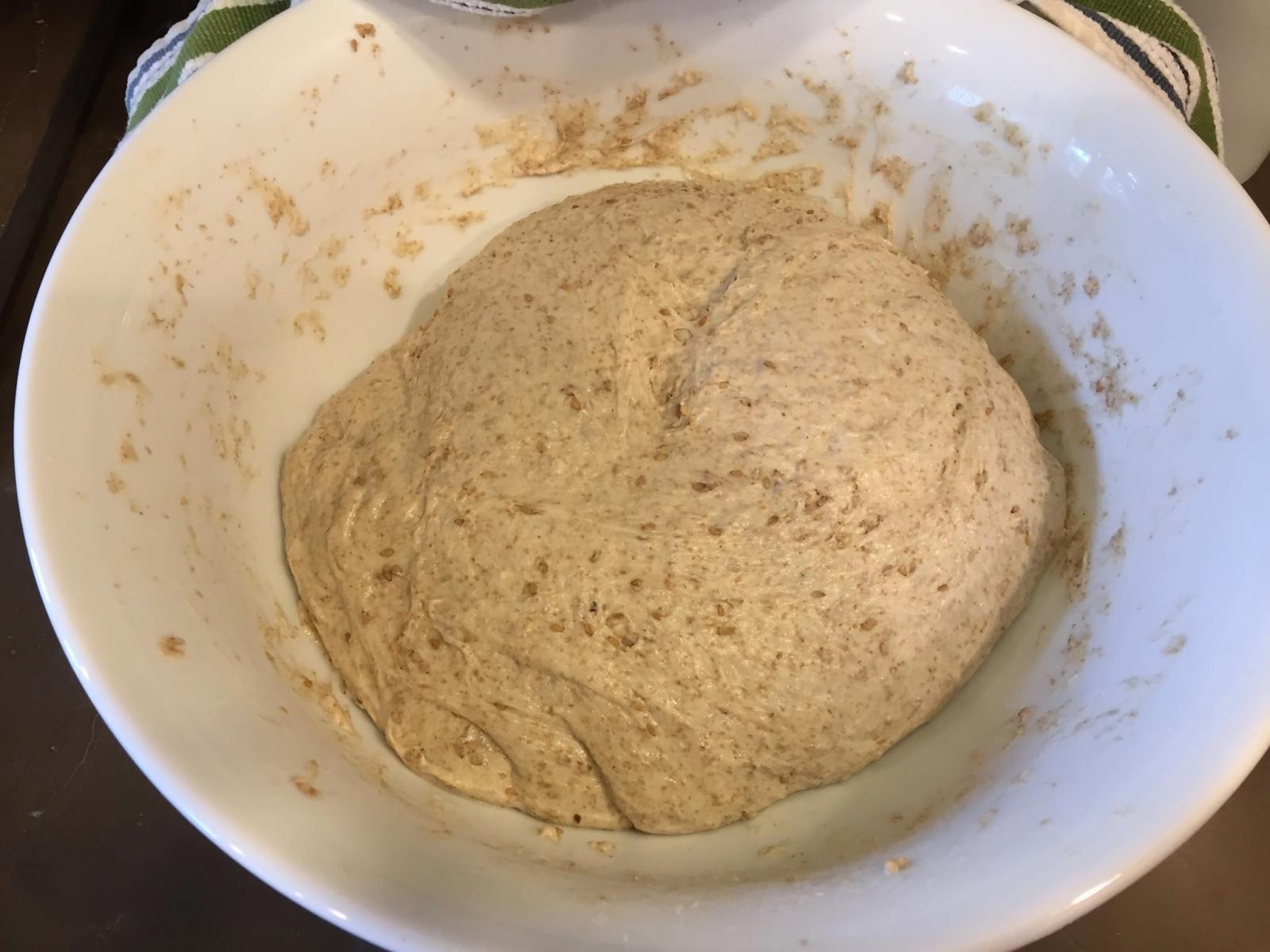 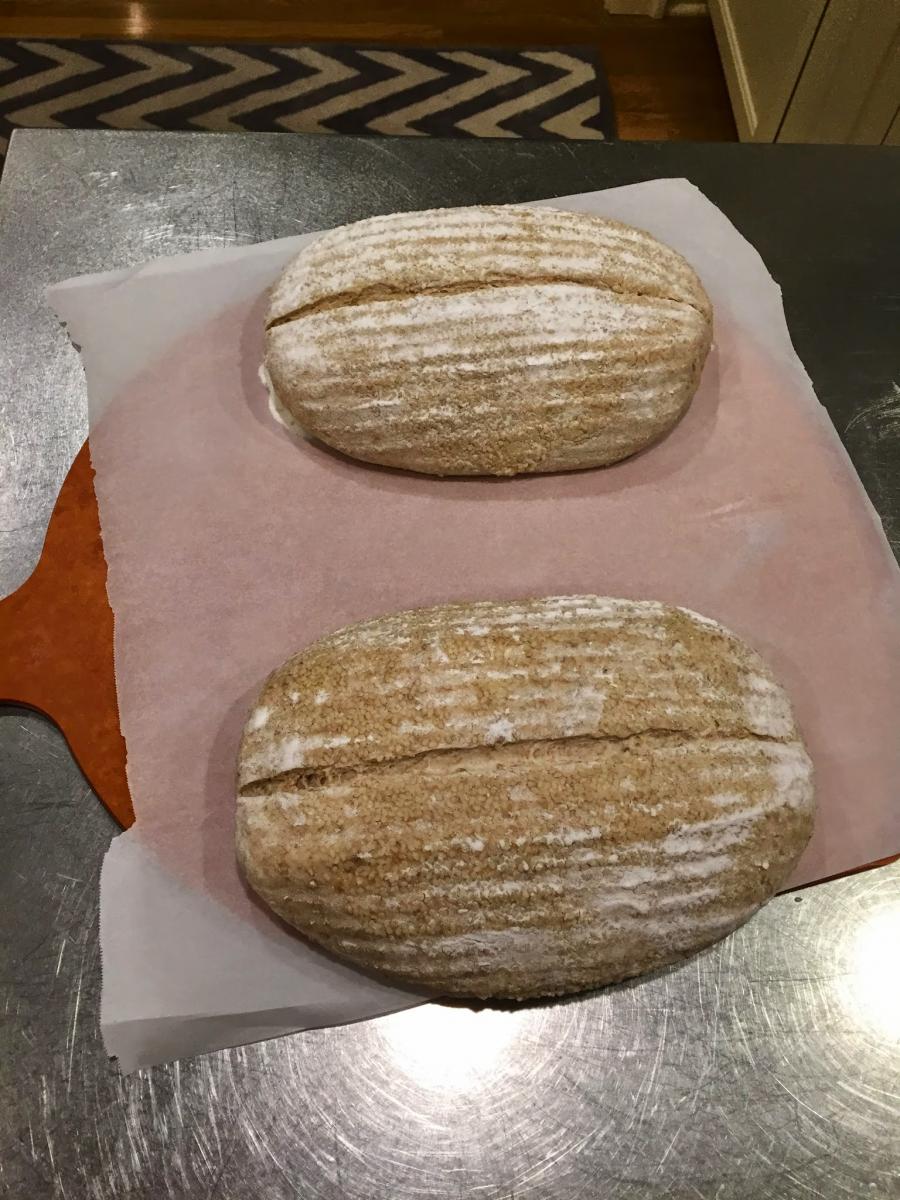 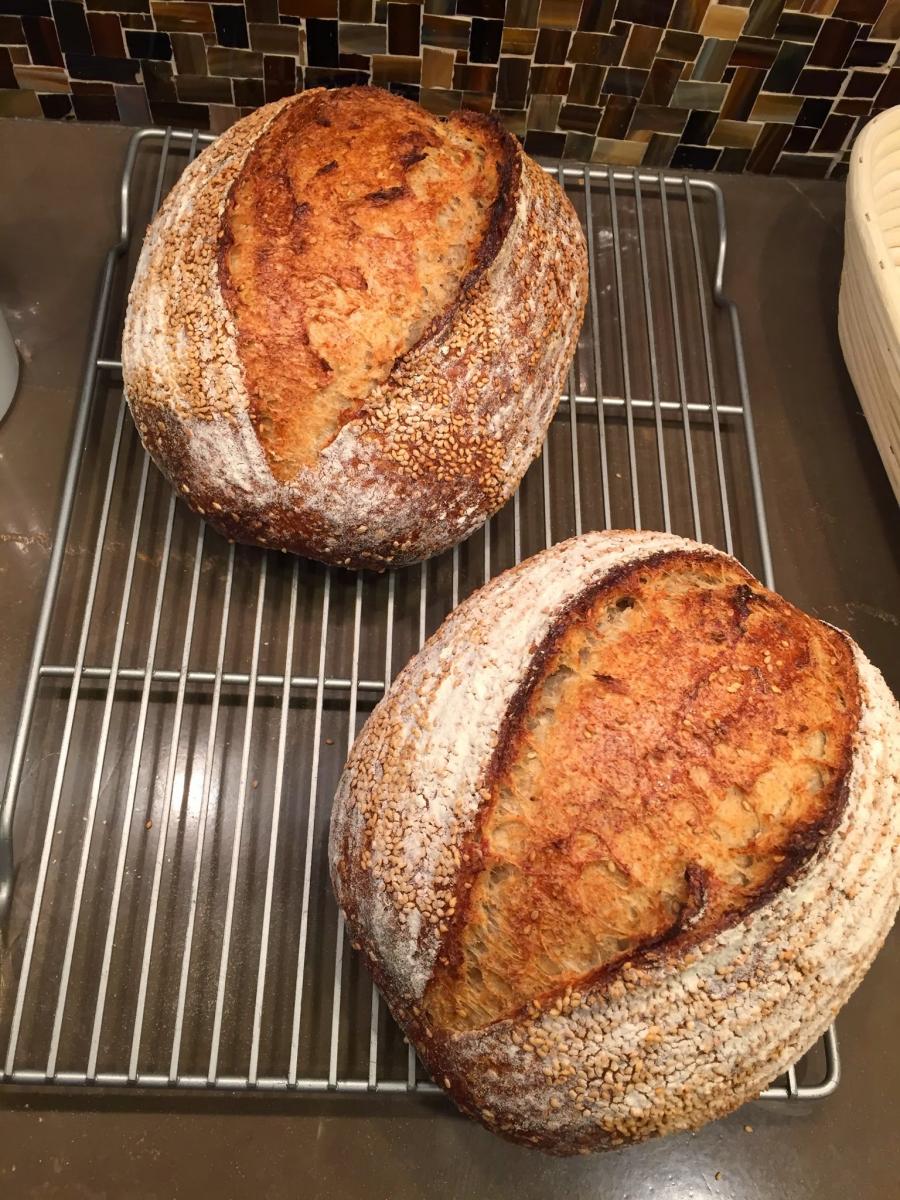 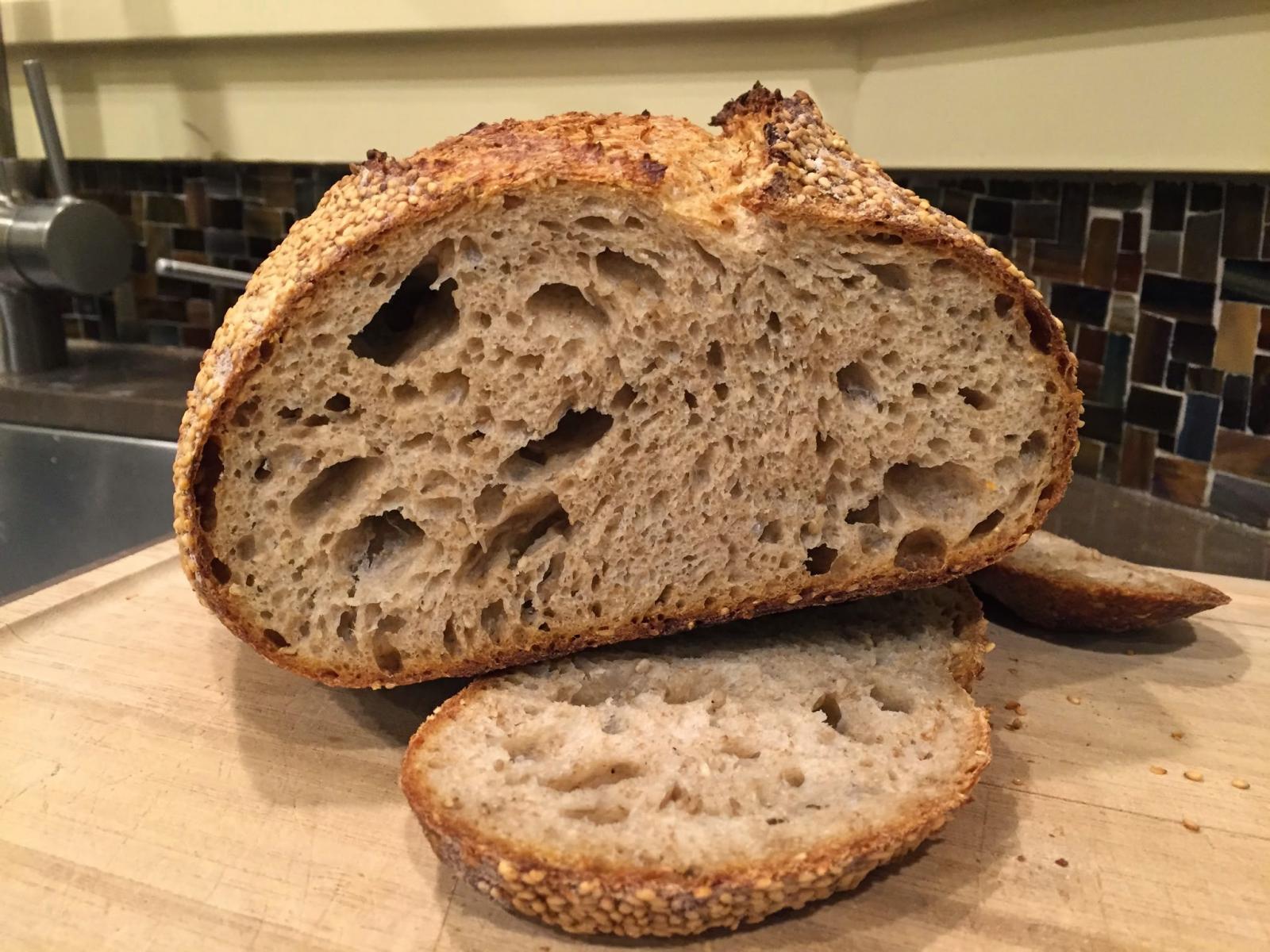 Wrapped up the week with some pizzas on said baking steel, and [for fun, another batch of habanero hot sauce (if only because I put it on almost everything, including the pizza…) 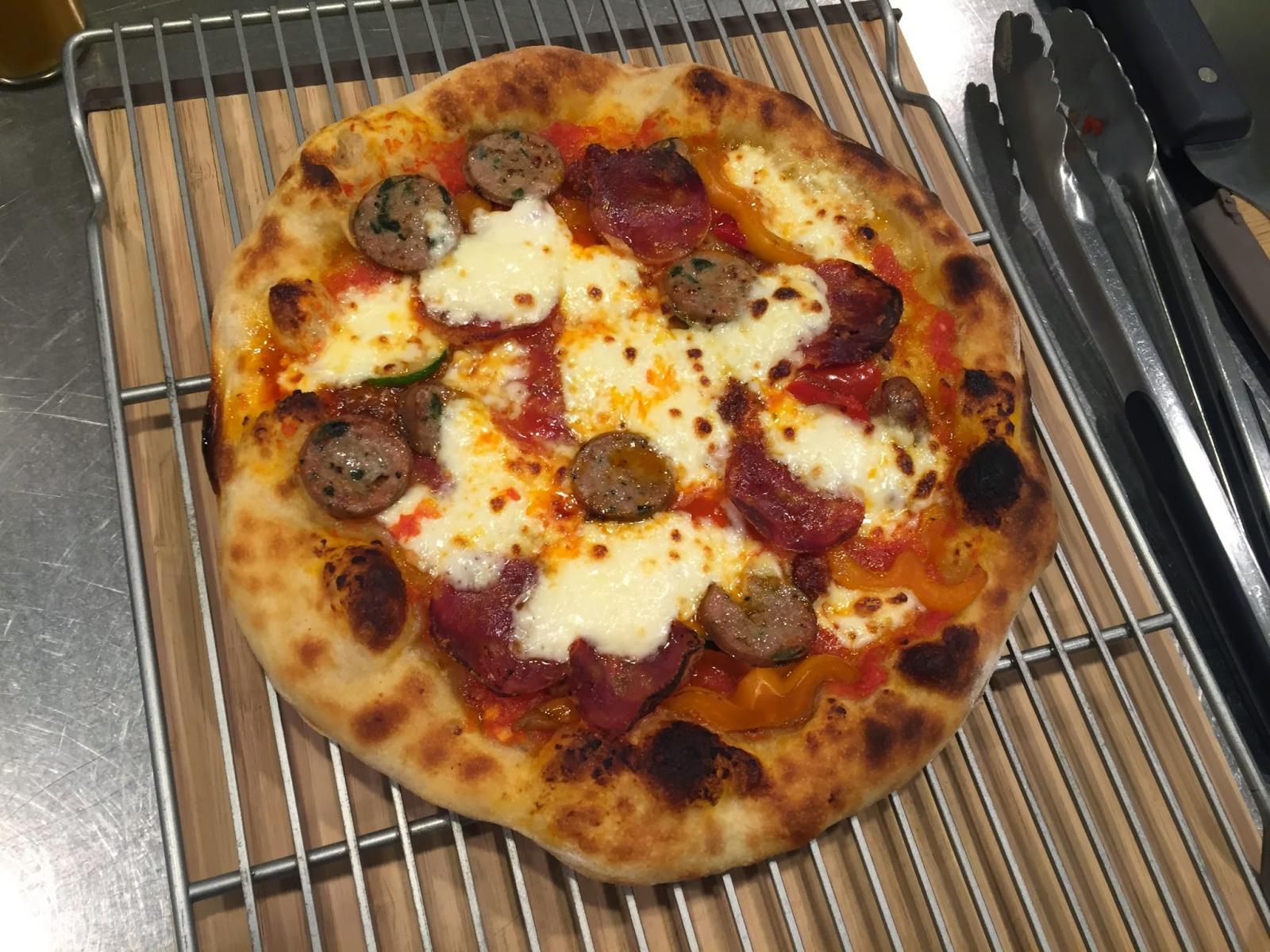 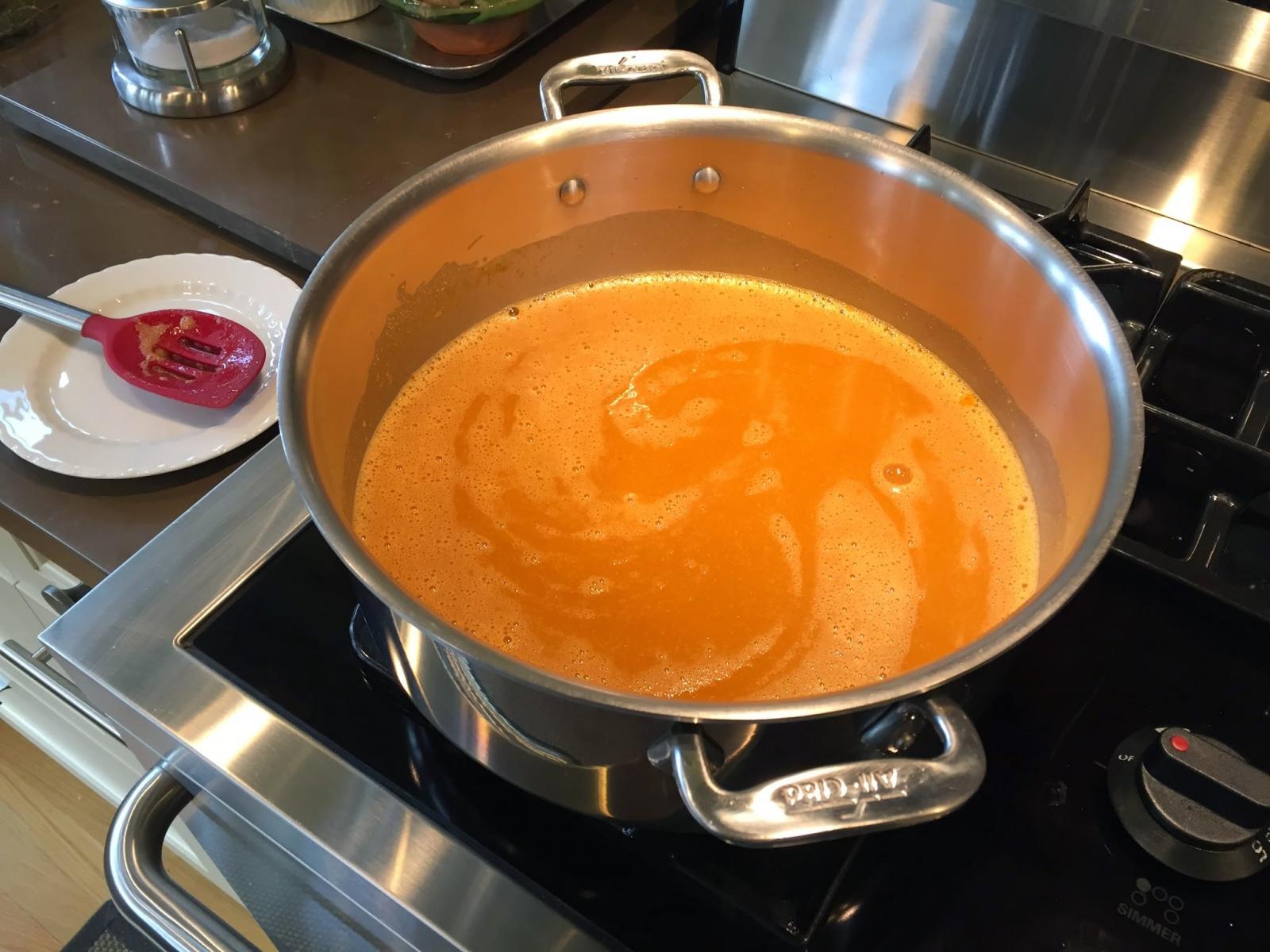 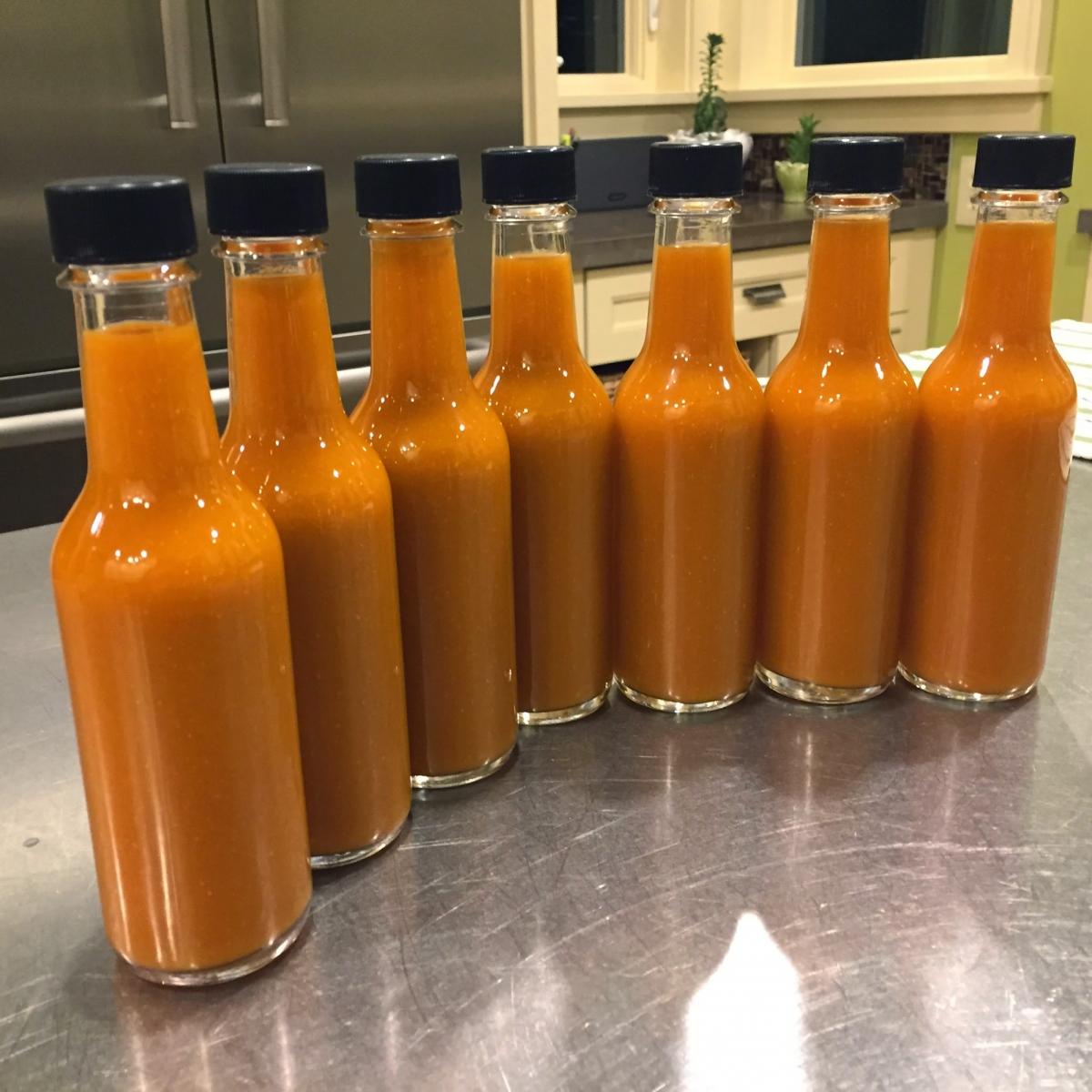 Cheers from the Pac Northwest

Wow, your sauce looks fun! May I ask where you found a recipe for it?

And your baking is very impressive - nice, plump and gorgeous. I also love sesame seeds in/on bread - made some with tahini recently and it was yummy. Thanks for sharing with us!

I tend to vary the hot sauce by what sort of peppers are available -- purchased or from my garden -- so every batch is a bit different.  For this last batch, I used 7% red chillies, 23% habanero, 14% jalapeño, and 55% white vinegar (that's my poor man's baker % for sauce).  Add in salt, a few cloves garlic, blend really well, bring to a boil, and cure for 3 days before bottling.  Cheers

Thanks for sharing! Hot sauce is virtually a food group for me and some in my family. Between our farmer's market and what we grow, this is do-able.  :)

I love FWSY, and Field Blend #2 understandably seems to be one of everyone's favorites. It's what got me into rye flour. I'm a big fan of J. Kenji also!

I usually score Forkish breads too, yours look fantastic. I must try the sesame seeds. Can I ask where you got your oval bannetons?

They have a good selection of lower cost banters -- they're a wholesaler, though, so have a decently high minimum order, so I ended up getting 5 or 6 forms at once

(who hails from the pacific northwest :) Not sure I need that many right now, but good to know in case I start a microbakery!

They carry a variety of sizes/shapes and their prices are reasonable, even with shipping. Find a friend who also would like some... and split the shipping.  :)

best when the outside looks as good as the inside and both take a back seat to how it tastes.  The seeds had to help in that department.  Well done and