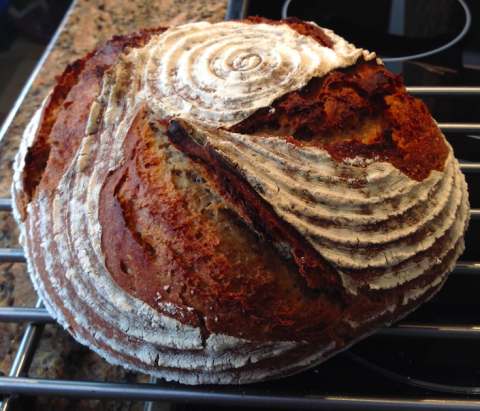 Basically a 1-2-3 Sourdough formula using two fresh baby Rye and Einkorn sourdough starters.  Started respectfully on Friday and Thursday of last week, this is their first loaf.  Last night they had peaked in activity (4 and 3 days old) and I combined:

Mixed up, covered and let sleep 16°C overnight or 14 hrs.  It did rise about 1/2 so did one set of folds in the morning followed by a shaping.  The dough just seemed to be far enough along at 11 am that no other handling seemed needed.   Banneton rise at 24°C.

The baking aroma was so wonderfully powerful.   I was drawn back to the oven before my timer.  To come inside to a home smelling of baking rye is just, well, one has to be there.  On my list of life's little pleasures.

matter what flour, just stick to one or a special flour mixture all thru the starter growing process.

I started a rye (although I already have a rye starter) to compare to the einkorn starter which turned out to be one day slower than the rye.  They caught up to each other on Monday.  The einkorn starter was smaller than the rye as I had already removed part of it for a poor recipe that rushed the fermenting process.  That loaf had to be rescued with instant yeast.   I had never made an einkorn starter before so didn't know if it would act like a gluten free starter or a wheat one.

As soon as it started smelling yeasty and bubbles collecting and rising to pop on the surface (and those wonderful pungent aromas showed up)  I knew I had to at least double the size of the starter when I fed it.  The container soon becomes cramped so some discarding has to be done.  It is very easy to just keep going, doubling (tripling or quadrupling)  the amount of flour to starter with pauses between; waiting until enough starter is ripe to make bread dough.   Usually in one or two feedings.  So have your recipe on standby (I tape inside a nearby cupboard) ready when the yeast get going knowing exactly how much starter is needed plus a little bit to feed for more starter.  Anything else gets composted or used as flavourings in other recipes.  (thickening soup, egg drop like noodles, pancakes, Mark's muffins)

I tend to jump to a generic recipe like the 1,2 3  when growing a wheat starter because no mater what the starter amount, all I have to do to make bread is double for water and triple for flour.  Yes, it is possible to just double the amount of flour to starter and add enough water to make a fine dough.  It's been done often enough.  Keep track of the flour so the salt can be figured out easily.  The more starter in the dough (to flour) the faster it ferments.  Do take into account temperatures.  Warm speeds things up, cool slows them down.  There are different ways to influence temperatures.

Some flours will exhaust themselves sooner than others so pairing a slow fermenting sourdough starter with a weak flour can get you into bricks.

As you can see with this bread, the starter and thus the dough fermented fast enough, had enough yeast to raise the shaped loaf while the flours remained bonded together.  This is a no knead recipe.  (The first thing I checked for in the morning, power of yeast in fed starters and the feel of the rested dough.)

Not one of those flours can stand by itself for 16 hrs without some kind of help to make a sourdough loaf.  The rye needs sour and something to slow down enzymes, the spelt needs rye to weigh it down, the einkorn needs more gluten the AP also has a time limit and deteriorates quickly but provides more gluten and combines into the protein bonds in the other flours.  Together with salt and enough hydration (felt like a lower hydration) they did it.  The combination of flours resisted deterioration while building flavour long enough to raise a loaf of bread.  I just slit it up and baked it before it doubled.

for the long explanation.  The more this newbie knows the better.

I'd love to see the crumb, when you slice it!

I stole the bottom 2mm for colouring for the next loaf.  It was a bit toasty (not burnt) but I wanted that flavour crumbled and inside another loaf.  I later brushed the loaf outside knocking off most of the flour.  Cut with the electric slicer.

This slice is 9cm tall.

Mini.  Has to taste great with all the multi grain too.  Well done and happy baking

making me want to try Einkorn! What a perfect loaf for sandwiches or hearty toast.

about is the price of Einkorn flour.  I pay €2 a kilo in the supermarket.

Still in the range of feasible, but higher prices would be a deterrent.

What are the prices out there?

I just looked it up at Breadtopia (Einkorn Wheat Berries – Breadtopia) and it comes to $2.99 per pound. I've seen it in a local Bioladen for less; but that's Flour and not the berries. I prefer to use the berries for special grains; they don't go stale as fast as flour does. I do love the flavor of Einkorn, and I need find some. Breadtopia was out of stock. I bought Emmer & Spelt berries at the Bioladen the other day -- and have been adding 50g  mockmilled of each to my loaves. The rest is usually bread flour from a local mill (Organic Expresso T85 Artisan Bread Flour – Cairnspring Mills) ---it's about $1.30 per pound, but the flavor makes it soo worth it. I buy the 50lbs bag and stick it in the freezer. (I turned vegetarian; now I have me room in the freezer for my flours and grains! ;) win-win?!

I've been thinking about something like this for a long time and now you've inspired me! :)

One question: What do you mean by Bread Spice?

of toasted lightly crushed, caraway, coriander and fennel seeds.  I used about 2% to 3% of the flour weight.  Slightly less  if pre-soaked in the starter.  Different bakers have their preferred blend that gets added to dark bread doughs.  Bread spices are seldom mentioned in basic recipes but the "secret" ingredient to regional breads.

They may also include other spices and seeds but this is one basic blend.

Thank you for the info.  I baked up a couple of loaves this morning (started yesterday without spice) and was pleased with the first try.  I was fortunate enough to have Einkorn and Spelt berries on hand that I had picked up a while back intending to try something like this.  The local coop (Moscow, ID) sometimes has berries from small growers in western WA.  Now I need to find more.  The hydration was a bit higher than you suggested and I just used my standard AP wheat starter, but it worked well enough.  Will need to try with the spices next time, although it was tasty as is! :)  Hoping to scale up a bit to 6+ loaves to try in the wood oven.  Thanks again! 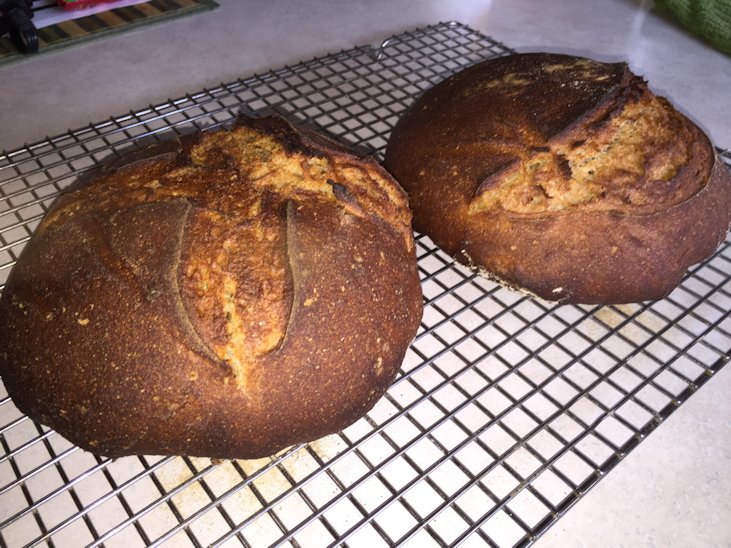 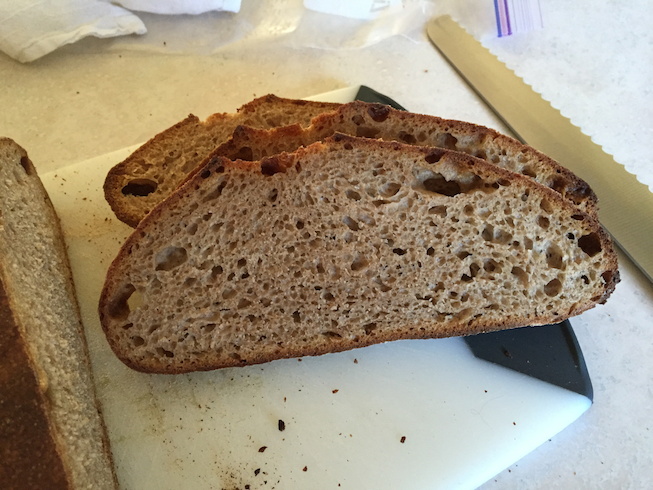 If you can manage the higher hydration, go for it.  Esp. in a wood oven.

Funny you should mention Moscow ID.  When we road tripped from Canada south thru Spokane, Idaho, Utah (had to speed on the salt speedway :)) and east to CO crossing and dropping below I-70 to I-40 we spent the night in a little town called Kit Carson.  The owners had just bought and started renovating having several rooms available.  They saw our WA plates and told us they were from Moscow ID.  A hard working couple with home baked goodies for breakfast.  :)  A "Hi Y'all" to Idaho and to Kit Carson.  :)

You seem a master to me.  I keep making bread, sometimes thinknibg too much of my skills like the french loaves I tried to make last week without a recipe...they are edible but not what I was hoping for.

Where did you start and what did you want to end up with?  Let's have some fun with it.  :)

Hi Mini.  How come it seems like a bake post from you is a special event?  For all the contribution you give to this forum, you rarely post your bakes.  This loaf looks great.  I like the non-typical flours you used in this one.  Happy baking.