Last loaf for 2014 is once again a panettone though it seems that there is a longer delay between when I baked it and when I post it. This year's special bake feature home made citrus peels (50% orange and 50% lemon) as well as beans from a vanilla pod for the added boost of flavour. 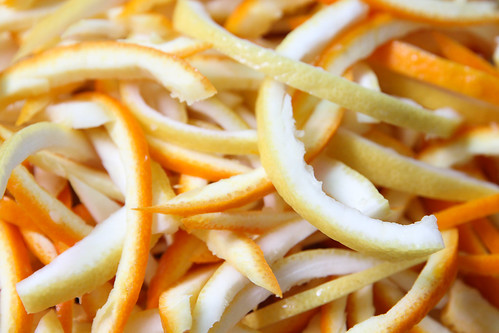 It was quite a bit of work slicing the peels thinly but the result was well worth it. Less sweet than the commercial version but much brighter in flavour. I especially like the lemon ones with their tangy, bright notes. Here is what it looks like after boiling and discarding the water twice before simmering in a sugar syrup for about an hour. 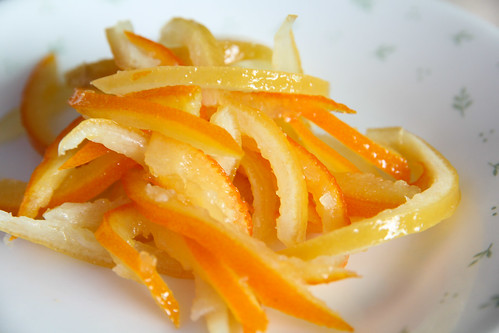 In the meantime, I prepaid the panettone starter over a week, feeding it at 4 hours interval about 2 days before I was planning to make it. Similar to last year's loaf, I used foolishpoolish recipe available here: http://www.cookaround.com/yabbse1/entry.php?b=66479 with the useful notes from txfarmer: http://www.thefreshloaf.com/node/21232/sourdough-panettone-who-needs-sleep-when-one-can-make-such-delicious-holiday-treat

The stiff starter rose magnificently, quadrupling overnight. The following morning, I mixed in the remaining ingredients substituting the citrus syrup for the honey and using it as a glaze as as well. In addition, I lowered the sugar to about 15% since the loaf was plenty sweet with the raisins and candied citrus. The dough took about 6 hours to rise to become a delicate pillow like cloud. 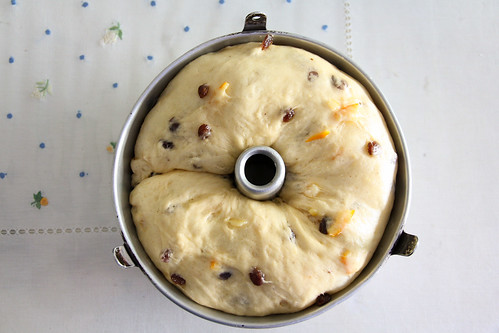 This time I decided to bake the 2kg dough as 2 loaves using an 8 inch round pan and a chiffon pan. Of course heaven forbids the baking of a panettone to go so smoothly - the dough in the cake pan exploded out of its custom made support mold which I hoped would help it rise vertically like a typical panettone. This resulted in its mushroom like appearance and it unfortunately collapse slightly while I was readjusting it to fit the pan. 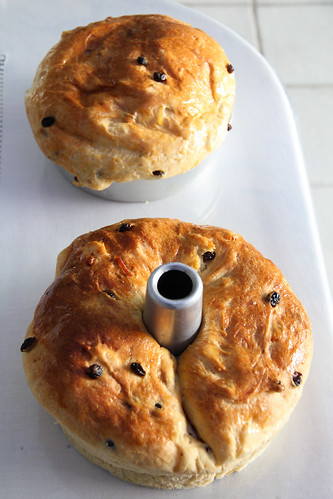 Nonetheless, I am still left with a super tasty, eggy, buttery, sweet bread with a super light texture. The natural starter does not add any sourness, but gives it an added dimension that makes it stands apart from a normal yeasted sweet bread. 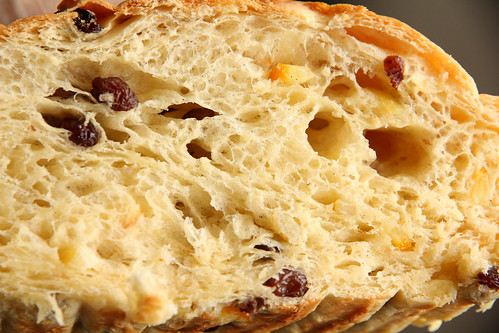 And here's a slice of the loaf / cake from the chiffon pan. The bottom crumb structure can be improved, its slightly dense but otherwise I think this is the best panettone I baked so far! 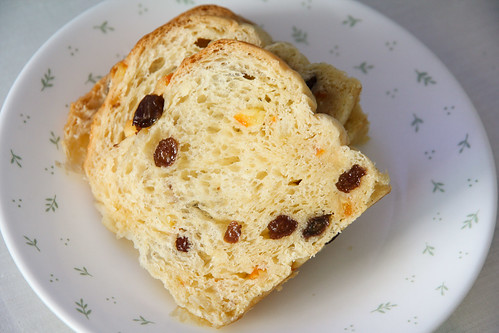 More things to experiment with and the next time I would like to get some proper molds to bake it in as well as to invert them after baking but I guess that would have to wait 1 more year. Have a great 2015!

I just posted too last night and always have the same problem with the distance between baking and posting! :)
I love your home-made citrus peels, they have been on my to-try list for a long time. I plan on dipping them into dark chocolate to just eat as is.
Your panettone slices look amazingly appetizing!

Thanks. Wow, you had a feast going! Do try the citrus peels, they are actually quite easy to make (besides the cutting) and taste great with or without chocolate!

Didnlt make panettone this year for the holiday but now want to have one for my birthday cake for some reason instead :-)  Yours looks great and has to be delicious.  Well done and happy baking

Thanks dabrownman! Happy baking to you too!

When we used to make lemon jelly we found that a handheld apple peeler worked well at removing the peel and leaving much of the pith, though there was still some scraping needing.  It resulted in a much different flavored jelly than one in which the pith remained, which always had a bitter undertone.