What I learned from Proth5

What I learned from Proth5 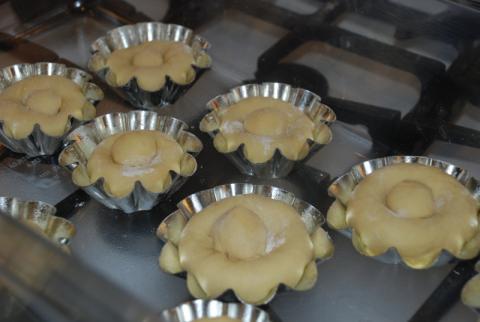 This week I've been honored by a visit from Pat Roth (aka proth5.)    I invited her here and happily enough she decided to come and share some of her baking wisdom with me.    One of the things I particularly wanted to master were those pesky brioches à tête.   How do you keep those heads up high?   How do you keep the neck from thickening until they look like body builders with no discernable distinction between body and head?

These are urgent matters but first

Years ago I worked in Boston.   On my way from the subway to the office I stopped in at the Pregnant Building at a little cafe in the lobby where I got my morning coffee and a spectacular brioche.   This being long before I started baking, I assumed that everyone could make such amazing brioche.   Little did I know.

Then the tragedy of 9/11 struck.   All the big buildings in Boston started upgrading their security.    Since the pregnant building was the tallest in the area, their upgrades  were the most extreme.   Before I knew it I could no longer get into my little cafe as it was barricaded behind a security desk, and only those who had access to the building could get to it.   I searched half-heartedly for a new brioche source but nothing that I found was even close.   I tried to get an id for the building.   No dice.   I gave up.

A couple of years later, remembering those brioche, I stopped by to see if the cafe was accessible and yes it was.  I was overjoyed but not for long.   Each time I stopped in there were no brioche on the shelves.   Finally I asked what had happened.   In the two years that I had been barred from the building, the baker had retired.

Fast forward many years.   I have now made brioche many times, but the results have always lacked the artistry that I remember pre 9/11.   My brioche has to be better or the terrorists will have won.   Enter Pat Roth.

A few important things about brioche:

Everything has to be very cold.   We weighed out and refrigerated all ingredients overnight.

Butter should be cold but plasticized by pounding (with a wine bottle in this case) before adding to the mixed dough.

The dough has to be mixed until it is very, very strong.

Here is Pat checking it out - is it strong enough? 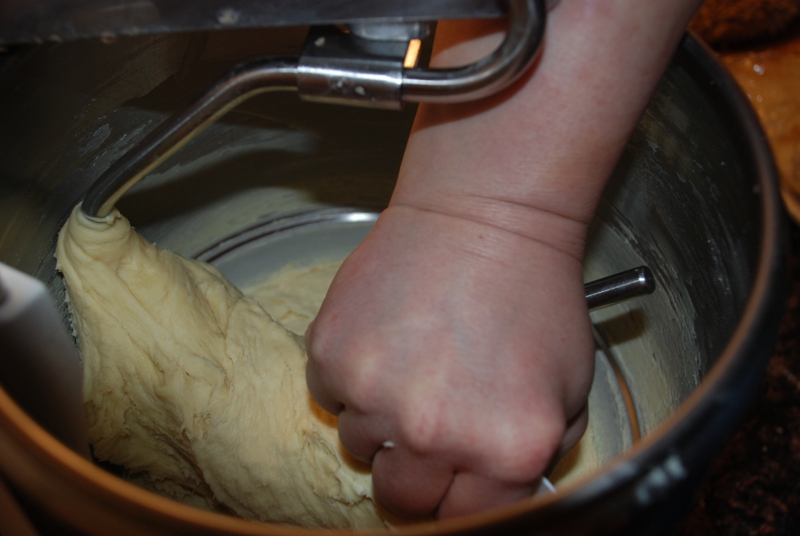 With the cold weather all my doughs are drying out before I can even get them shaped.   But no need to worry.   Pat taught me to place the preshaped dough balls into a closed container so they stay moist before shaping. 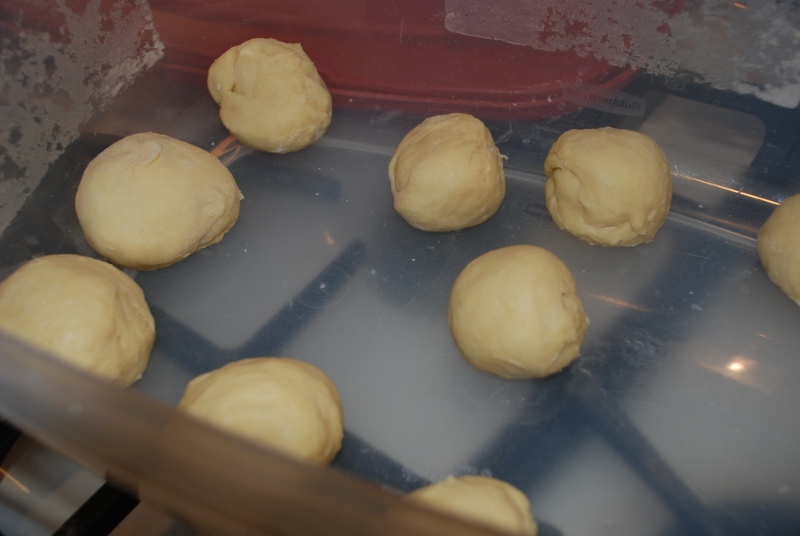 She also taught me a new preshape method - stretch out, fold in half, turn so edge is on counter, fold in half and roll for a second.   Very fast, very tight.   Rest the dough and then shape into a ball.   The preshape gets you most of the way. 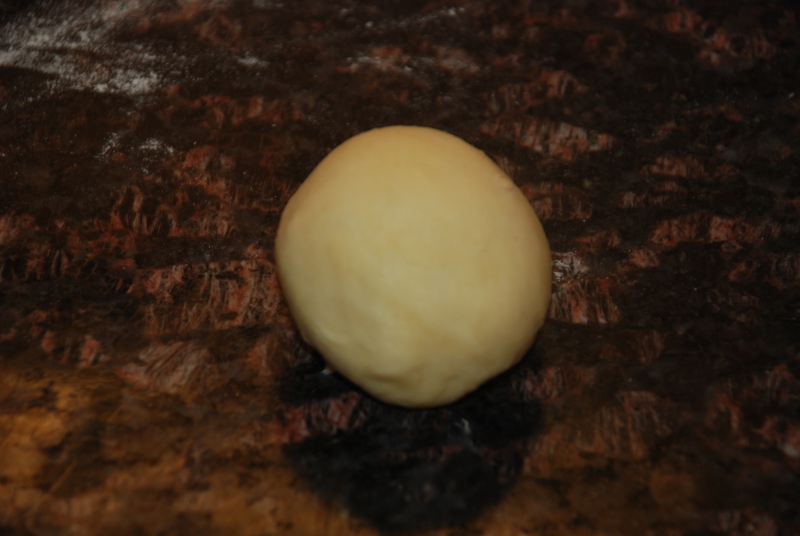 Then things start to get hard.   Make a pool of flour on the counter.   Flour the side of your hand, then start rolling a neck into the ball.    Not too much flour or it will just flatten out. 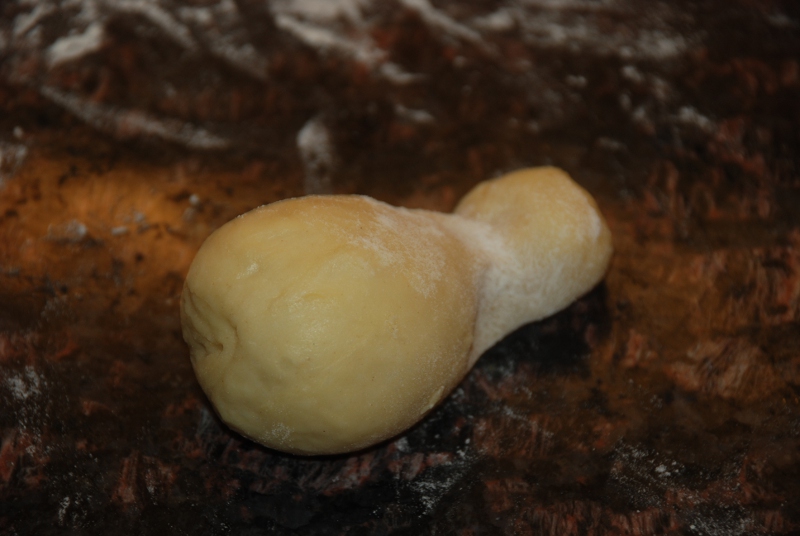 Straighten up that bowling pin and place upright in a brioche tin. 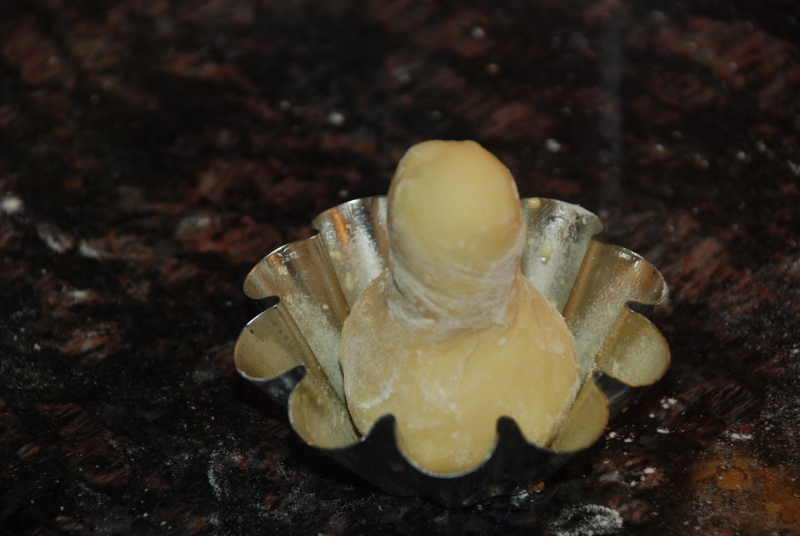 Now the really hard part and since I was working so hard no time for pictures.   With your left thumb press the head back while taking a floured right index finger and pressing it straight down from the base of the neck almost to the bottom of the tin.   Rotate all around until it looks like the picture at top.

And now the really good part: 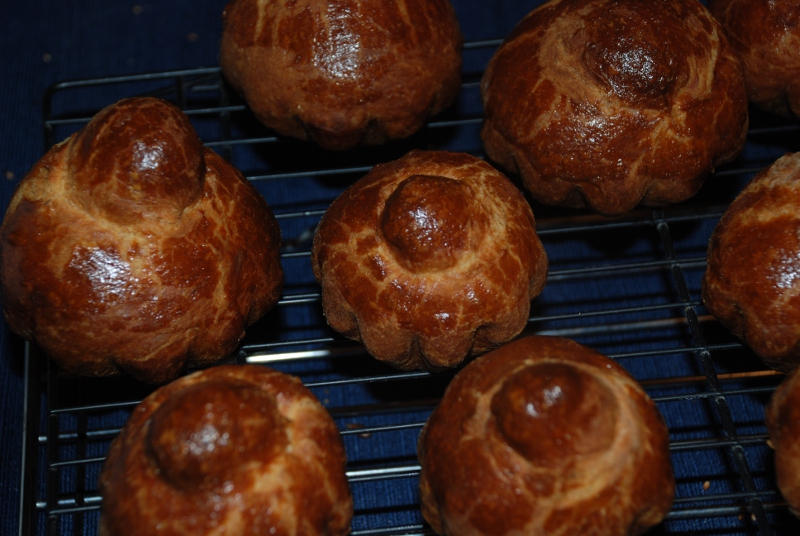 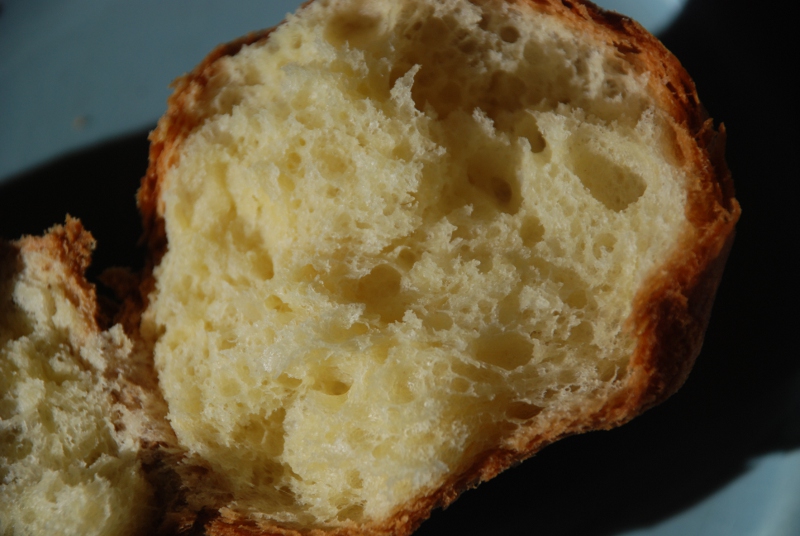 learning to make fine Brioche from a master.  Well done and Happy baking in 2015

These look great.  Such perseverance.  NOw maybe you can supply the cafe with your brioche….Sounds like you two are baking up a storm.  How nice to have Pat by your side.  I know it makes a world of difference to have someone actually demonstrate something that looks complicated but turns out to be not so hard after all.  Now you know the feel of the dough - good old body memory, so repeating should be made a lot easier now.

Don't you just love beating the butter into submission.  I learned that trick from Pat too but she was wielding a marble rolling pin.  I kept my distance :*)

Thanks so much for sharing and Pat please bring back some nicer weather.  It is actually humid and cold here now and the streets are like an ice skating rink.  My evening walks have been put on hold because even my boot spikes can't keep me safe under these conditions.  The dog just looks at me when I suggest a walk and heads back to the bedroom.  He is no dummy.

Hi Janet,Cold here too.   But still must walk the dog.   He insists on it.  Yes, good time being had here (at least by me.)   And my dog is deciding if he wants to read hamelman.   He's still on the fence. 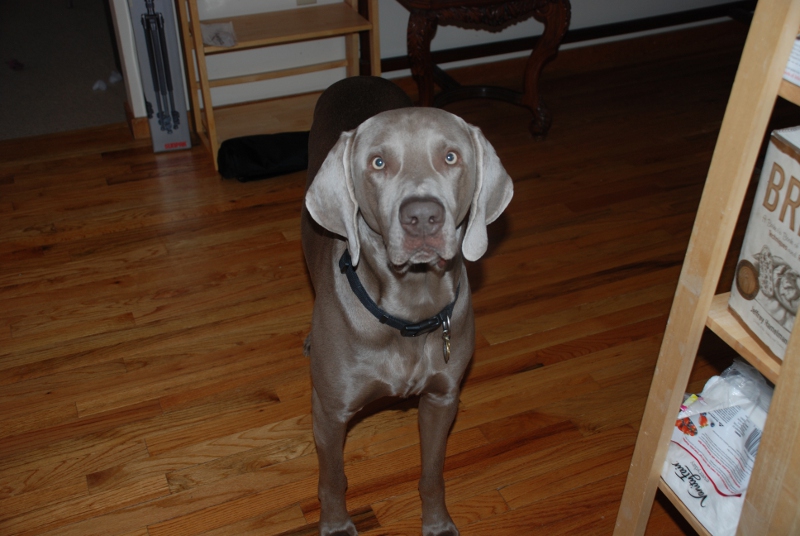 I'd guess the pup doesn't give a hoot for Hamelman. He's looking for a bit of brioche!

P.S. Reminds me of a many years ago visit to Les Deux Magots on the left bank. At the next table sat a very elegant young man - a Count, at a minimum, I'm sure - in his gray slacks and double-breasted blue blazer, sipping his espresso and feeding a brioche to his equally elegant poodle (the real thing, not one of this micro-poodles), one bite at a time. I so wish I had had the nerve to take a photo of the scene!

David,  Half the time I think Obi Wan is demonstrating affection it turns out he's looking for food.   So you are right on the money.   Great story about "the Count and his faithful poodle."   Thanks so much for commenting.  -Varda

Great post Varda.  I'll have to add this on my list to try soon.  My Max and Lexi would be happy to try your brioche any time :)

but we probably shouldn't eat too many.   I accidentally didn't add as much sugar as called for, so they were just incredibly buttery but not so sweet, which turned out to be very nice.   Yes our doggies love those treats, but would eat frozen squirrel (I speak from experience) just as happily.   Thanks Ian.  -Varda

I remember you talking about how delicious those brioches were all those years ago.  So glad you had a master teacher to teach you!  Hoping I will get to sample some day.

my post should have been longer.   I am very happy that I had a chance to make these and all I need now is practice, practice, practice.   I will definitely need eaters, or all that practice will be hazardous to my health.   Happy to see you on TFL.  Varda