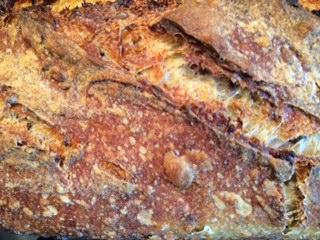 I have had a lot of fun making a five grain levain recipe over time, and I wanted to add more grains and play around with hydration and fermentation on this bake.  The recipe below is an adaptation of Hamelman's five grain levain.  This time around I added pumpkin seeds, sesame seeds and poppy seeds to the other grains: bulgur, sunflower seeds, oats, flax seeds and cous cous. Maybe it's really eight grain; not sure if all the seeds count as grain!

Khalid inspired me to make my first five grain, and Zita got me thinking about adding more grains when he worked for months to perfect his seven grain, which was fabulous. And dabrownman is always baking with many wonderful grains, and his bakes are always inspiring to me!

I really love making the soaker.  It absorbs all the water very well and quicker than you think. 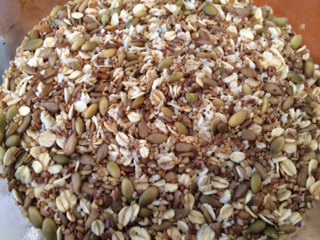 I used a bit more water this time, so the dough had higher hydration.  The crumb turned out OK as a result. My husband enjoys a very crusty crust, and he gave this loaf good reviews. 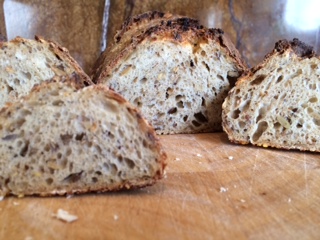 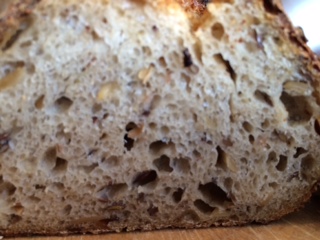 I used my covered baker, which is different from the recipe below. I baked the loaf with the lid on for 30 minutes at 500 degrees and then 10-12 with the lid off on convection at 435 degrees. I also was a little loose on the gram weights for the seeds.  I bet the final total was a bit higher than the recipe below. 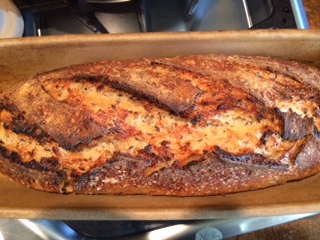 The only other change I made to the recipe below was doing a longer bulk ferment at room temperature and did a bit of a room temperature proof after shaping just before I put the shaped loaf in the refrigerator for the night. I am continuing to bulk ferment the rest of the dough as I only made one loaf today.  I plan to bake the rest tomorrow, so I hope they turn out OK.

Adapted from Jeffrey Hamelman’s Bread: A Baker's Book of Techniques and Recipes

Soaker all of the above
Levain all less 3 tablespoons

1. Liquid-levain build: Make the final build 12 - 16 hours before the final mix.  I ran out of time, so I accelerated this to seven hours, placing the hot soaker on top of the levain build bowl.

2.   Soaker: Make the soaker at the same time when making levain build. Pour the boiling water over the grain blend and salt, mix thoroughly. Put it in a tightly covered container and sit at room temperature.

3.  Mixing: Add all the ingredients to the mixing bowl except the salt. Mix or stir the ingredients together until it becomes a shaggy mass. Cover the bowl with cling wrap or plastic bag and let it stand for an autolyse phase for 20 -60 minutes. At the end of the autolyse, sprinkle the salt over the surface of the dough and mix on a medium speed of your stand mixer for 3 -5 minutes until the medium gluten development is achieved. (I have also made this by hand without a mixer).

4.  Bulk fermentation: 1 to 1 ½ hours or 2 hours if the dough is retarded overnight.

7.  Final fermentation (proofing): Retard the loaves in the refrigerator over night.

8.  Baking: with normal steam, 235C for 40-45 mins, turn the loaves half way through the bake. (I retarded the dough and took it out in the morning. I then let it rest at room temperature for about an hour. In the meantime, I preheated the oven for about an hour to heat up the baking stone.)

higher hydration made for a lovely crumb.  It doesn't get better than that inside or out.  Wonderful that the bread is so healthy and hearty too.  What's not to like.....eeeerrrr......love about this bread.  Now I'm inspired!

Lucy really went crazy this week.  We are drying the 15 grain sprouts for Friday's bake - and no bulgar in the lot!  I suppose this is Lucy's 2nd attempt at the 15 grain with no more than 30 ingredient challenge bake using sprouted grains this time.

dabrownman:  I am sure Lucy will come through with flying colors on this one.  I am sure she will take great photos as well. Looking forward to it.  Thanks for your comment.  Best,  Phyllis

Amazing crumb, especially for a loaf with so many intense grains!

I think I will stay with a little more water to get the more open crumb.  Best,  Phyllis

That looks great and sounds interesting - would love to taste that one.

I actually saved the last two loaves to bake today...just left them in the fridge in a bulk ferment and shaped last night before putting back in the fridge.  They look like they popped up overnight, so should be OK.  I am giving them to my friend and hairdresser and my doctor.  I had a routine doctor's appt yesterday, and she asked what I had been doing and I showed her a photo of the bread.  She asked that I bring her one next time, so I thought I would surprise her today!. Thanks for your support and encouragement, as always.  Best,  Phyllis

Looks yummy! Pass me some butter and I'll have your loaf gone in no time!

Also, the thing about multigrain breads is that the selection and ratio of grains/seeds has a big impact on flavour (aroma, taste, texture, etc.). So finding the right balance that best fits your preferences (or your family's or whoever) can be an enormous challenge! I had to go through a number of experiments before I was satisfied with my Seven Grain. Actually, I'm not completely satisfied, knowing certain ingredients would improve its flavour. But hey, if people love it, then you shouldn't be too hard on yourself.

Keep up the wonderful bakes, Phyllis! Always a pleasure to read your posts.

I totally agree on the ratio of grains/seeds really affecting the final bread.  That's why it is fun to experiment with different combinations.  Thanks to you for the inspiration on your seven grain.  dabrownman said he is working on a 15 grain, so can't wait to see that.   Hope you are aren't working too hard.  Have a great weekend.  Best,  Phyllis

What a nice way to surprise someone. Your bread looks fantastic! I have made your base recipe before as well, but feel inspired to include even more seeds now.

I just saw that dabrownman made a 16 grain, and I have a lot more grains/seeds to try, so I think I may experiment again as well.  Thanks for your kind comments and good luck with your baking.  Best,  Phyllis

At least for Hamelman, seeds count as grains in figuring whether you made a 7, 8, 9 or 16-grain bread.

I've got the seeds toasted for Hamelman's "Sourdough Seed Bread" and will feed the levain and soak the flax seeds tonight to mix tomorrow and bake Monday. It seems quite pedestrian compared to your 7 (or 8) grain, but it will be tasty.

I have found that all these multi-grain levains' flavor benefits from retardation of the formed loaves, and they get even better a day or two after baking. Let us know how your retarded loaves do compared to the beauty your showed above.

Looking forward to seeing you bake today.  Thanks for the tips on the seeds.  It was an eight-grain, then!  The retarded loaves did very, very well.  I baked them the next day for my hairdresser (and our friend) and her husband and for my doctor.  I heard back from my hairdresser that both her and her husband loved it. My husband really enjoyed the bread for sandwiches and just finished the last tiny piece for toast this morning.

I did another bake today as well--will have to work on my blog.  Thanks, as always, for your support, advice and guidance.  Best,  Phyllis