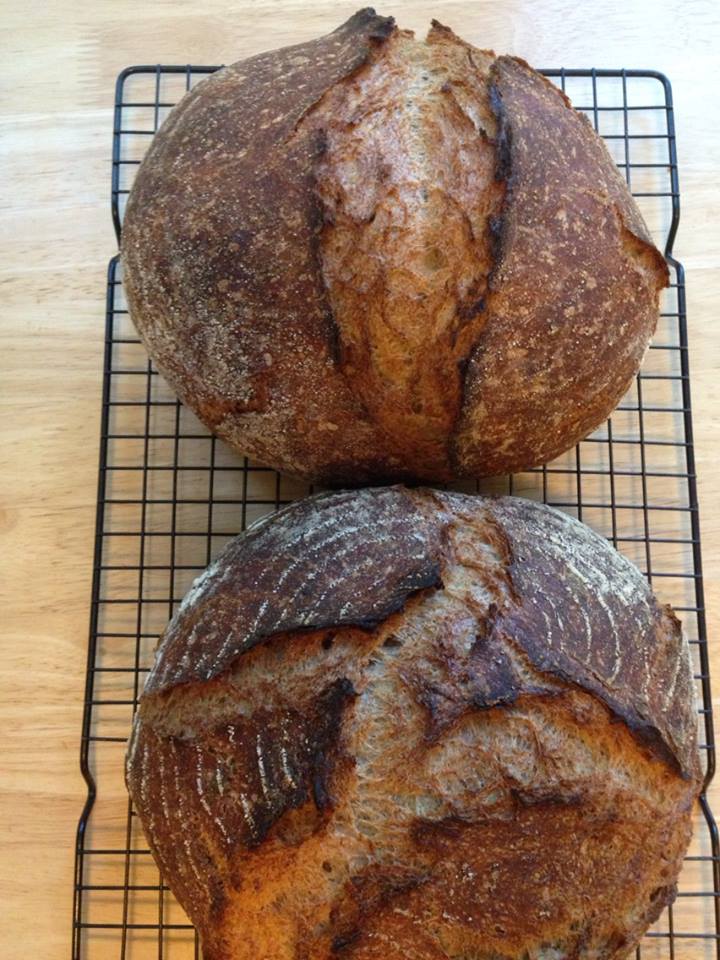 These are really the first loaves I am baking without a formula.  Forkish's FWS&Y had a formula for same day 75% whole wheat bread, on which these loaves are loosely based.  I wound up baking them and freezing them before cutting them, so I do not know how the crumb is, or what they taste like.

I did not bake the breads according to a plan and did not note what was in them.  I believe it is 500 grams of AP flour, with the remaining 500 grams being freshly milled whole wheat and rye.  I just have no idea what percentage of each I used, basically pouring what I had on hand into the bowl, until it came to 500 grams, and then milled.

I also did not use 80% hydration but reduced it to something lower. I did not note that either. I am guessing it was closer to 73-75%.  I figured that I did not need it so high with less whole wheat than he had called for.

I thought it was very cool how baking seam side up gave two completely different looks to the bread.  I shaped one of them "alla Tartine" and one of them according to my interpretation of Forkish.

Here is a closeup of the crust on one of them:

I love the colour of the crust, beautiful dark and YUMMY.

When I am in the new house on Saturday I shall bake my first loaf of bread there before I even start unpacking . ha

I have all my stuff I need for bread baking in my plastic container which I take with me first thing.

What is the "different look" that you're referring to, David, comparing seam-up with seam-down? Did you see any difference in oven spring between the two? Were they baked sequentially or simultaneously?

The different look was how the loaves burst. Both were proofed seam down alla Forkish. However, they were shaped dofferenly following Robertson's boule instructions for one and Forkish's for the other.

They were baked side by side in Lodge combo cookers. I didn't photograph then or weigh them or note which was shaped one way versus the other. The Forkish way felt weird. I could not fold it from four points each all across the dough because it seemed to be too many folds. So when I realized that after a couple of the folds I winged it and started forming it into the boule.

Your loaves are gorgeous, David! You are crossing a barrier from trusting and applying the knowledge from others to developing and exercising your own. Congratulations!

...and yes, it's probably a good thing to write it down, but it's fun to "just wing it" and take pride in a successful outcome!

great spring and bloom.  Love the crunchy crust and color of this bread.,  At 50% whole grains it should be tasty enough even if coming out of the freezer - which should be no problem at all.  Well Done and

Very impressed with the improv!  Wish I could achieve such a beautiful crust and seam, really well done, they're beautiful.  Bet they'll taste great too!

So, I brought one loaf to North Carolina where my Aunt and Uncle were suitably impressed, and this week I ate the other when I returned back home.  The crumb was very fine for sandwich bread. The taste was good.  But it was not as good (to me) as the overnight country brown.