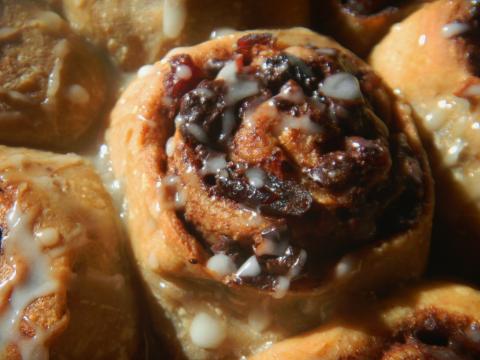 These sort of cinnamon rolls are similar to the one’s here:

With some differences  The 72%  Ghirardelli Dark chocolate that replaced the original chocolate chips.  We used a 70% whole grain wheat spelt and rye flour mix and the dough weight is about 400 g grams less making there ‘mini’ rolls. 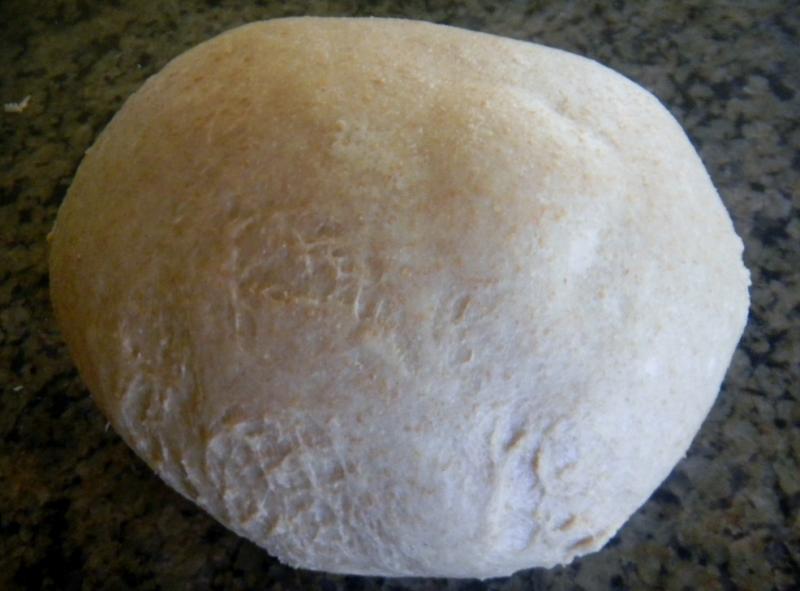 On the process side, we did 3 stets of slap and folds on 15 minute intervals of 5. 1 and 1 minute each, let the dough rest 15minutes and then rolled it out 1/4 “ thick and added the fillings.  Once the dough was rolled up and cut into 9 rolls, we placed them in an 8x8 pan and immediately retarded then for 4 hours to fit our next morning bake schedule.. 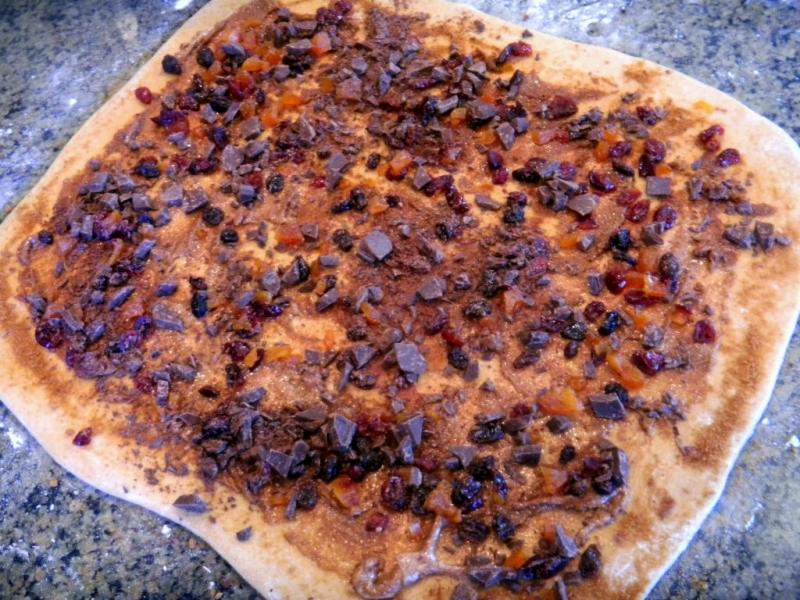 Once they came out of the fridge, they were allowed to proof on the counter for 10 hours overnight before baking them at 375 F until they hit 195F on the inside middle.  After a 10 minute rest they were glazed with the GMA’s Lemon powdered sugar glaze. 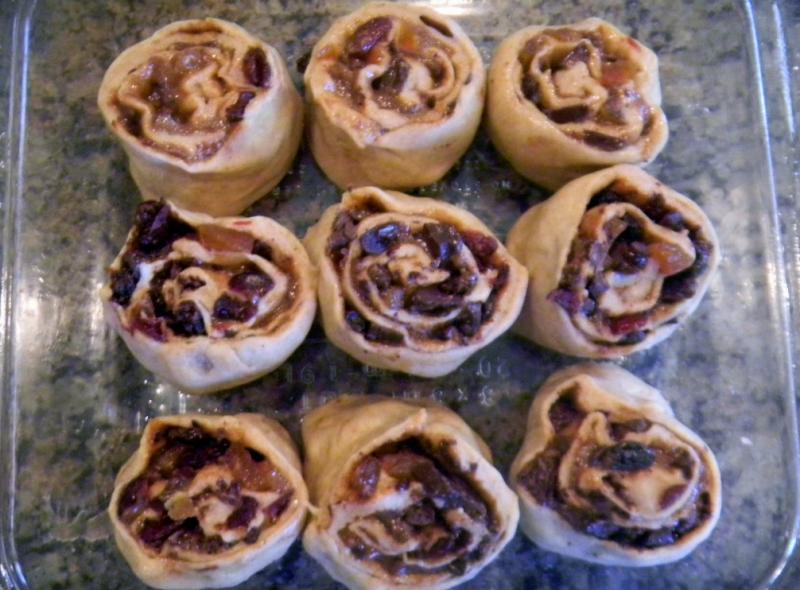 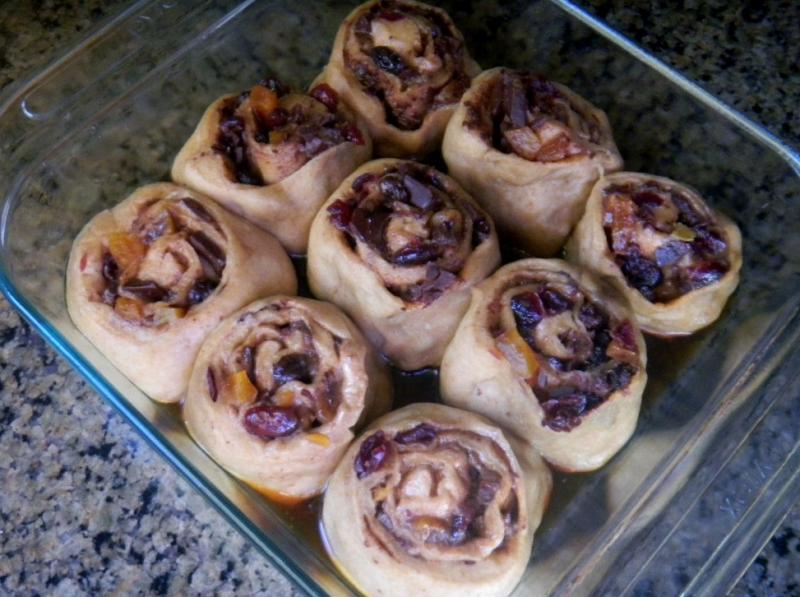 These don’t relly taste or have the texture of puffy soft white flour cinnamon rolls. While the bread part is still soft and very moist, these are less sweet, fruitier and have the dark chocolate undertone which changes the flavor to one all its own.  We like them better than cinnamon rolls and these are healthier too. 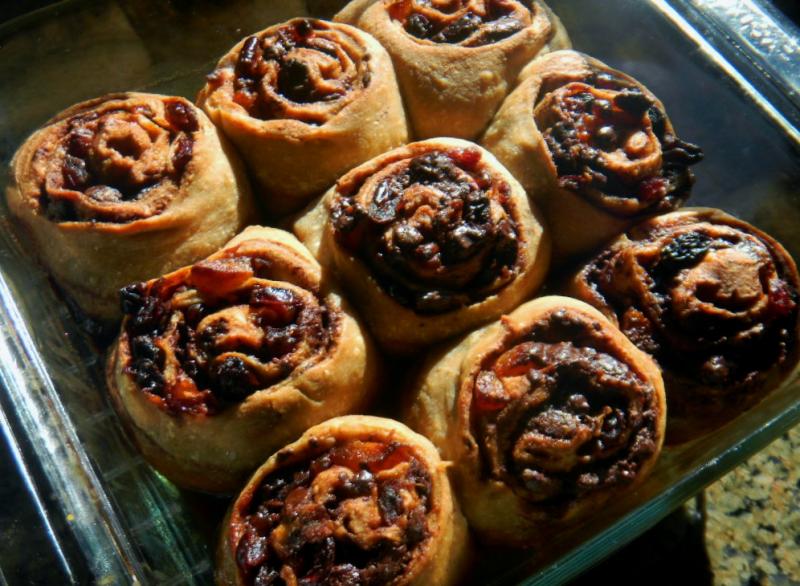 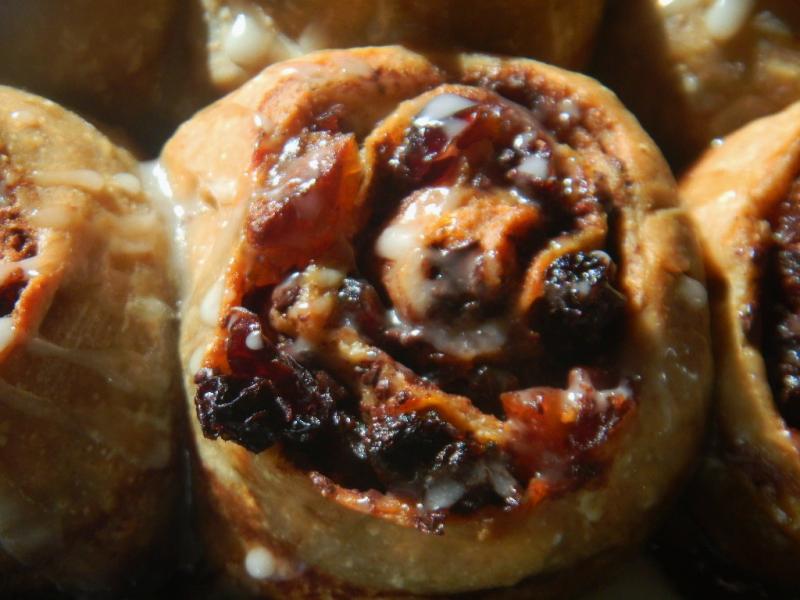 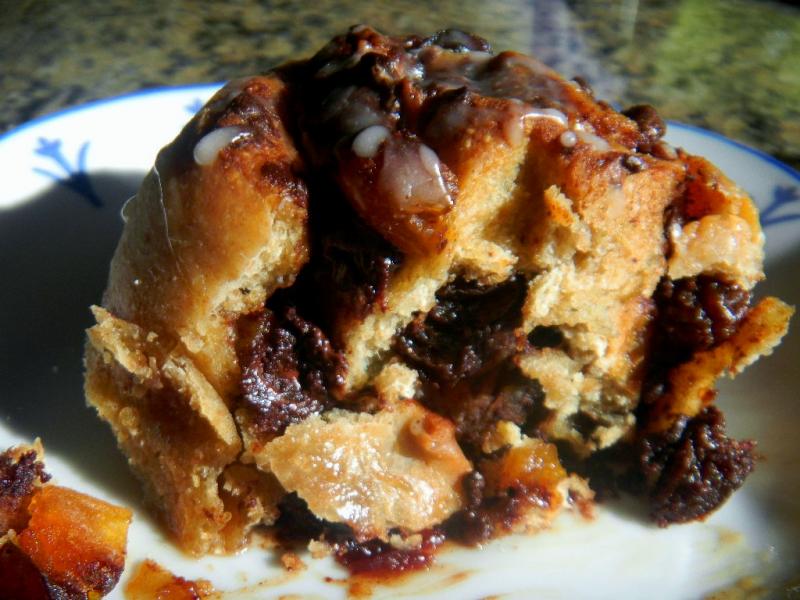 and, since we got the mill, putting them in everything is some much easier - so in they go.  I've used so many of them the last couple of years i don't miss the white breads too much..... except for David's famous 3 -0and we add whole grains to them too:-)

I shouldn't even be looking at those.  Beautiful.

I shouldn't be making them much less eating them but alas.....no will power...thank goodness:-)  Happy baking Jane

You are killin' me.... I wouldn't have thought I would want chocolate on my cinnamon rolls... or snockered fruit for that matter... but these look heavenly.... talk about warming up the kitchen... nothing says lovin' like.... those rolls.

one look and your hooked.  This is the same mix of fruits chocolate and spices we put in Banana Nut Bread - all you have to do is add nuts and bananas:-)  Very versatile for  stomach and thigh expansion plans :-)  Perfect with morning coffee - at least the 3 I had for breakfast were - the rest might be poisonous!  Glad you liked them Diane and we love the lemon glaze -perks them right up.

I used up the last of the back yard heirloom tomatoes to make tomato soup after the GMA's post.  Best soup ever.  Liked it so much we made soup and them stew again even though the temperature is over 105 F every day.

One look and I have to try these! Nice baking dab!  Ski

make the original recipe and drop the chocolate chips in that recipe.  We like both of them with this one being more healthy if there is such a thing with these kind of rolls, Glad you liked them Ski and

Sorry for the late comment.  These look wonderful and can't be bad for you with all those healthy grains in them right?

Lucy calculated that you will burn more calories eating these beauties then the amount of calories in them so, the more you eat the thinner you will be. Can't get healthier than that: -  Except for the Einstein Potato bread she came up with today:-)