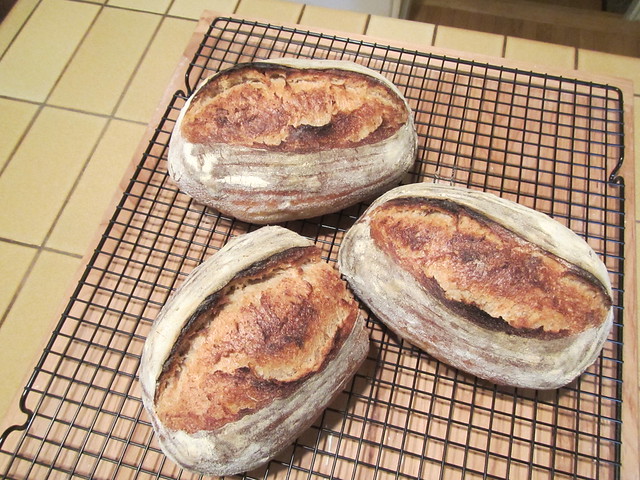 Coming up on four years since I first tried to bake bread.  The history has been kept here in my Fresh Loaf blog.  For the first two years or so, I baked almost weekly (and blogged often weakly).  Then, as my experimentation yielded satisfactory formulas and techniques, the baking became a bit less frequent and the blogging much less frequent.

I have continued baking, maybe once or twice a month.  And I remain an active evangelist for Carbotarianism.

Recently, due to a busy work schedule and then a vacation, I went about six weeks without baking bread.  The freezer stock was depleted, and my Number One Bread Fan commented on the dearth.  So....I baked her favorite, and mine: San Francisco Country Sourdough.

I feared that I might have forgotten how.  But the old saying is true: once you learn how to fall off a bicycle, you never forget.   The result was very satisfactory. 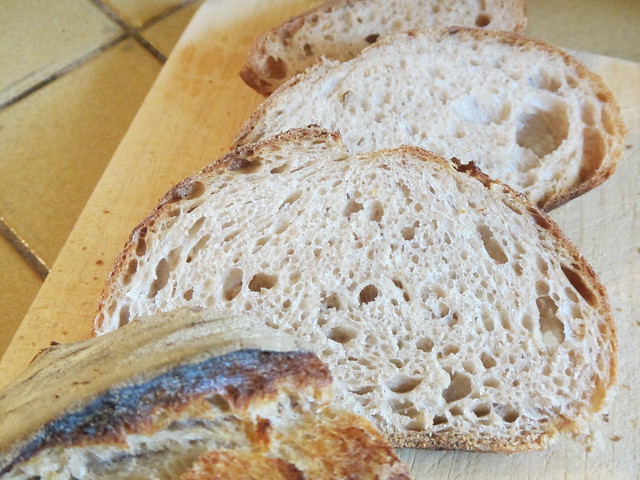 I want to give thanks again to my wonderful mentors and friends here at The Fresh Loaf.  Hope all are well.

How timely that you should post just now.  I just mentioned your name to a woman who is a great niece of the owners of the Larraburu bakery in SF.  SHe is working on a documentary and is looking for anyone that might know something about the bakery and what happened to the starter when they closed their doors.  If you know anything you might want to contact here. You can contact her  HERE  .

"Business' out of the way.  Nice loaf and I am impressed that that you haven't lost your touch after such a long hiatus.  Have you been feeding your starter all of this time or did you have to start up a new one for this loaf?

Hope to see more posts.  I always enjoyed reading about what you were up to.

It would be very exciting to get a taste of bread that was made with the Larraburu starter which had not left San Francisco, if such a thing exists. A bit of googling reveals that a baker named Scott Hessler took it to Hawaii, then another baker got it from him and took it to Austin: http://www.edibleaustin.com/index.php/people2/chefs/986-benjamin-baker . After those migrations I would doubt it has much memory of its roots, though I am sure the bread is delicious.

I recall that Larraburu was closed because its truck hit a child, but I did not know that its insurance carrier was (apparently--it's written in legalese and I'm not a lawyer) penalized for not living up to its contract. Found that in the same googling. Hopefully the documentary will bring forth the full story.

I spoke to her this summer and she said she was going to put together a tasting sometime in October and would like to gather some old time Larraburu fans to ask how the current bread compares to their memories. I told her I would be in SF in late October and asked her to keep me informed. Alas, that was our last contact.

Snyders and other Bay Area bakers, did this happen? Can you post a report? Thanks, Otis

First, I was amazed at finding this thread.   I moved to the Big Island in 1995 and met Scott soon after.  A few months later I partnered with Scotty's Sourdough.  In 1996, with a bit of pressure, moved Scott and the bakery to Kihei Maui.  Unfortunately,  Scott did not want to utilize the retail space I acquired, nor did he want.to expand our product line beyond the 'original' recipie. I finally had to part ways and left with a bucket of starter, moved upcountry to Pukalani whee I opened the Grateful Bread Bakery and Cafe.  I remained there until 2001.

In 2003, I moved my family (and my starter) to Vermont and the Bristol Bakery.  It was here that I finally parted ways with that starter.

Scotty had told me that there had been a rumor that the Lerraburu starter was cursed. The fact is, no one that I know of has ever been able.to realize complete success with that starter.  Yes, it was an amazing starter, and I made beautiful bread with it. But, just as Scotty had, I lost everything in my pursuits with that starter. The same.demise also came to another Island baker that I had left starter with to continue serving some long time customers.  The Bristol Bakery stole my recipes and the starter.  They have been through a couple owners since then.

A great starter CAN be created with 3 basic ingredients, and the quality of those ingredients, and the AIR QUALITY of the environment are the keys. The thing about very old starters is it's kinda like we humans. When we are young, we are susceptible to getting sick until our immune systems builds.  If fed well, and exercised we continue to get stronger.   The same goes for starters.  They are very temperamental and can harbor unwanted bacteria easily at the beginning.  Feed it good water and quality organic flour, and exercise it by using it and refreshing it regularly.  In time, your starter will get its legs and become more stable.

Thanks for the comment, Janet.  Though it doesn't tell me when it's hungry quite as loudly as the kitty cat, my starter does get fed regularly whether I'm baking or not.

As to the Larraburu search, I have been in contact with the investigator, but had nothing to contribute except good wishes.

Indeed, you haven't lost your touch Glenn.  Those are fine looking loaves and I could have identified them as yours without you having signed your name to them.  It is funny how everyone has their own style, shaping, scoring, loaf colour, even way of taking pictures.

Nice to see  you back here.

I guess my loaves do have their own look.

Your bread fan has to be happy now:-)  Well Done and