Focaccia on the stovetop finished with the broiler

Focaccia on the stovetop finished with the broiler 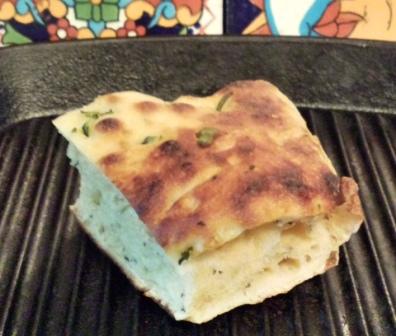 It's not hot here, not yet, but I am dreading the season of too hot to bake. What we have now is the sort of weather that has me firing up the grill only to have to call the whole thing off due to rain. So I am crossing my fingers for today, Memorial day.

In any case, I've made something resembling pizza on the stovetop with my cast iron grill pan and this week expanded to focaccia and something shaped reasonably like ciabatta, but lacking in the sort of holes I was hoping for, which I think means it's time to toss the last of that batch of yeast.

The focaccia was 70% hydration with about 5 % olive oil, and the "ciabatta" was 80% hydration with again about 5% oil. Both were made with King Arthur AP flour. I shaped them on a parchment to fit in my grill pan and put the dough, parchment paper and all, into the preheated grill pan with the burner at medium. The dough was in the pan for about 5 minutes and once the bottom cooked sufficiently I removed the parchment. Then it went under the broiler on low for another 5 minutes or so. It's not the way to go if you want an even crust color, but I'm rather pleased with the result and the lack of a long preheat for the oven. 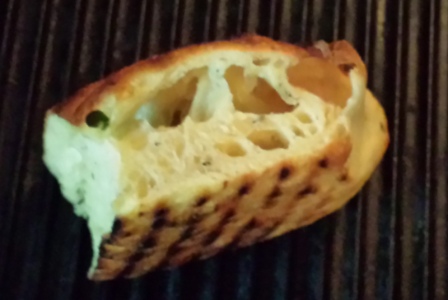 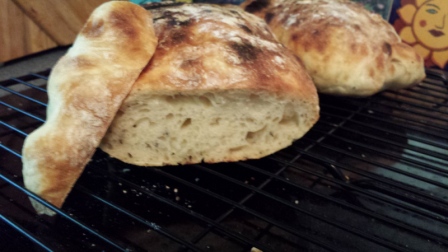