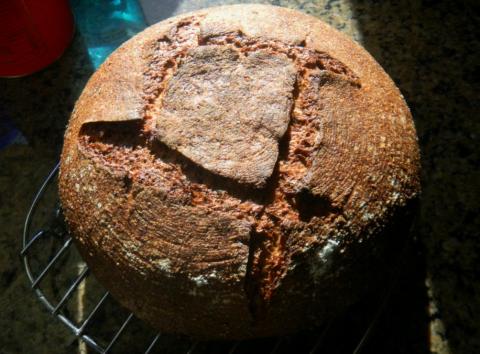 Lucy finally got back to her bread and butter with a high percent whole grain multi-grain bread.   It has been a while but this one may prove she hasn’t lost her touch - if she ever had one. 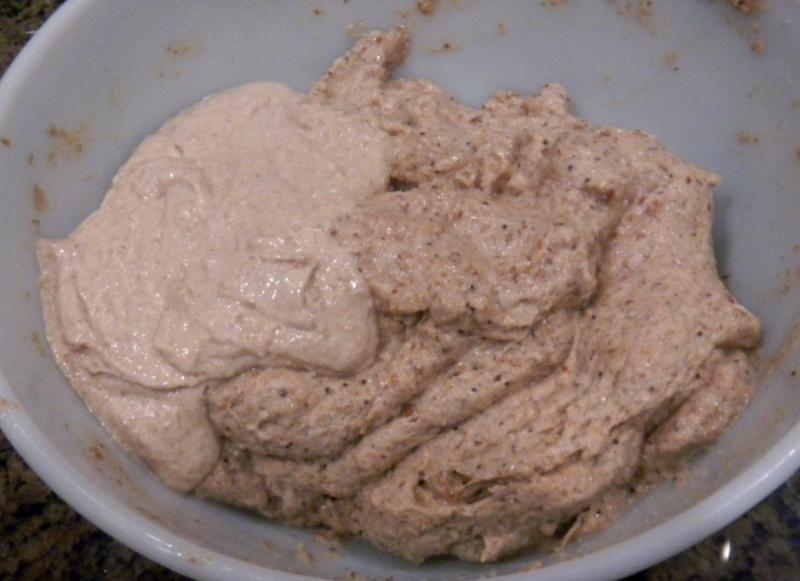 I'm always amazed how much the acid in the levain leaches out the color becoming almost white compared to the autolyse which has exactly the same grain in the same proportions at nearly the same hydration.. 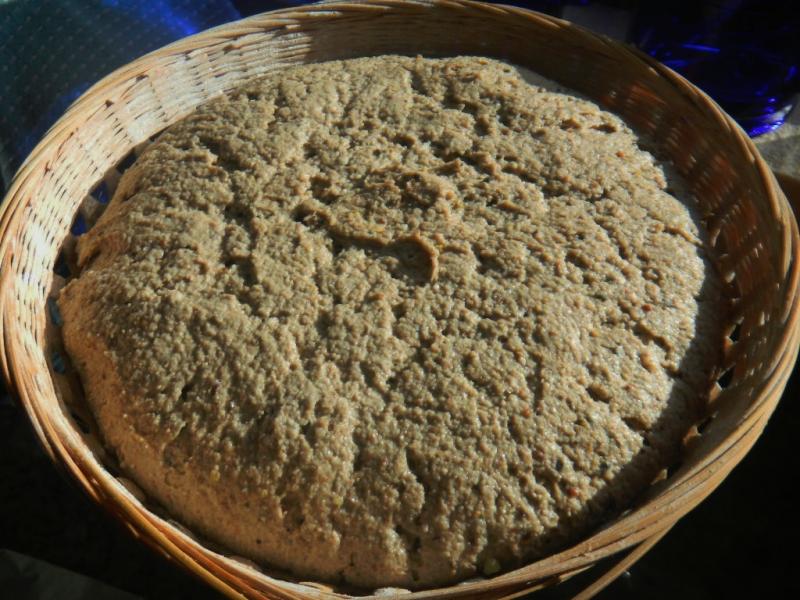 The levain was built our usual 3 stage way using our 66% hydration rye starter that has been refrigerated weeks.   The levain doubled after the 2nd 4 hour build but we  only did a 16 hour retard after the levain had risen 25% after the 3rd feeding. 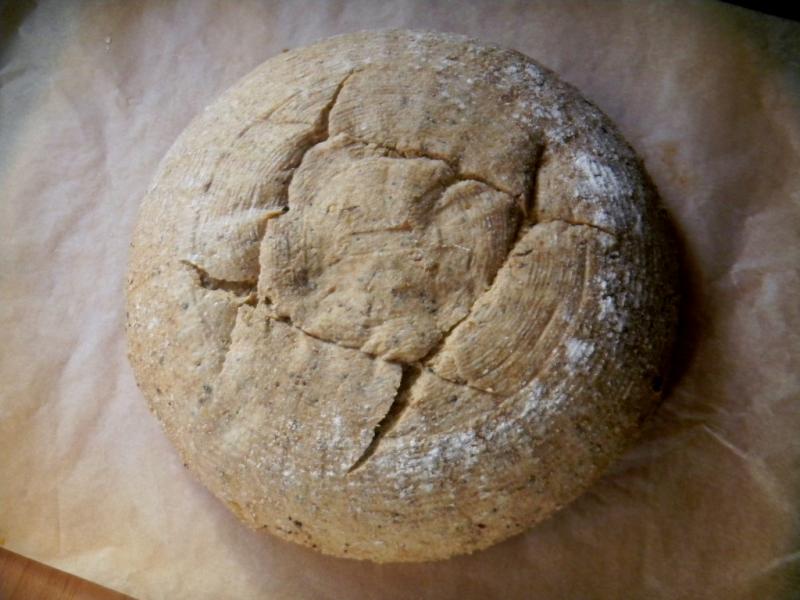 When we got the levain out of the fridge the next day to finish its 3rd stage doubling, we started the 3 hour autolyse of the dough flour and water, (including all the add ns except the aromatic seeds) with the salt sprinkled on top so we didn’t forget it. 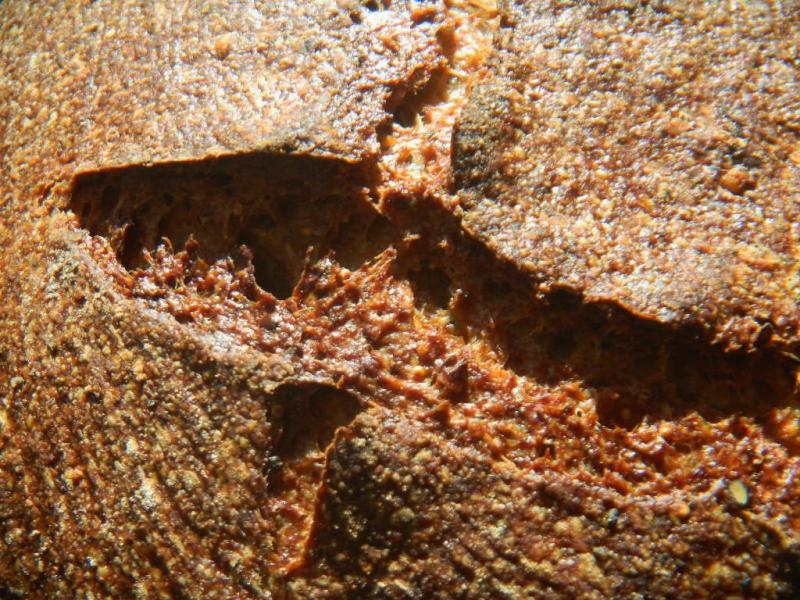 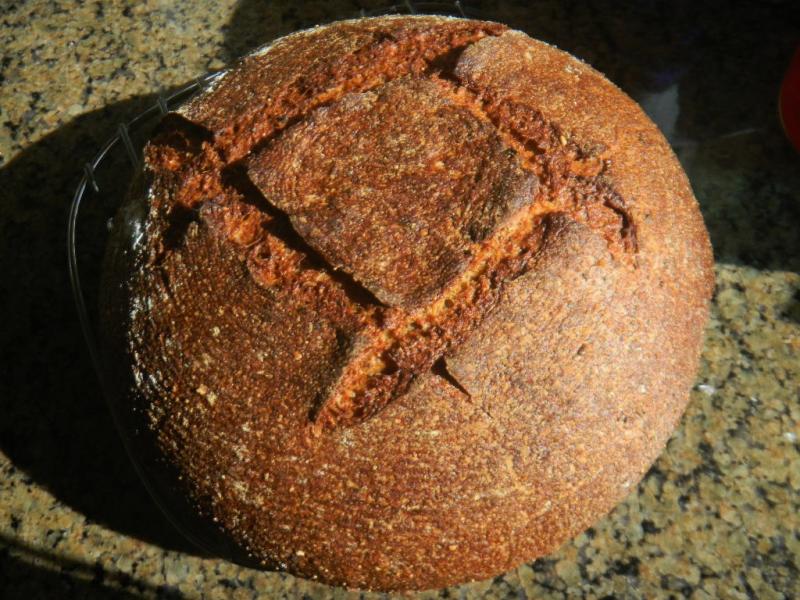 Once the S&F’s were done we immediately pre-shaped and then shaped the dough into a boule and placed it into a rice floured basket, bagged it and placed it in the fridge for a 10 hour retard.   This is about 2 hours less than put normal retard but after last weeks over proof we would try to under proof this one and bake it right out of the fridge. 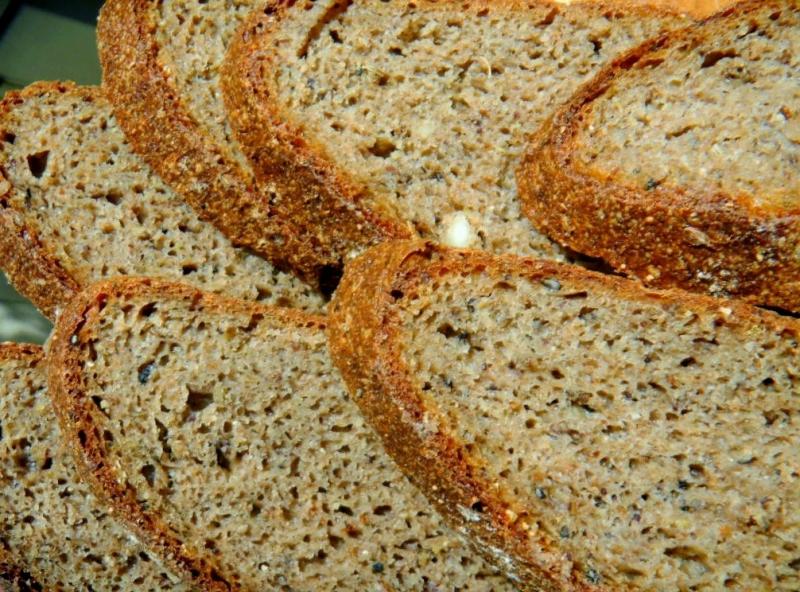 We fired up Big Old Betsy to 550 F regular bake and put the Mega Steam Apparatus on the bottom rack when BOB hit 525 F.  When she got to 550 F 15 minutes later the steam was billowing and the stones were at 525 F. 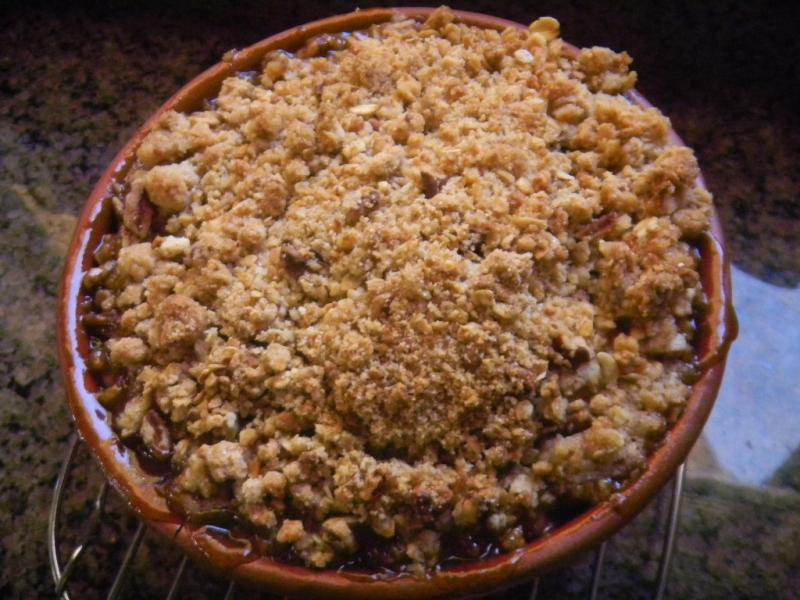 How did that apple Crisp get in there?

We upended the basket onto parchment paper and a peel, slashed it quickly and slid it on the bottom stone with another stone above for 15 minutes if steam .As soon as the oven door closed we turned the oven down to 500 F and 3 minutes later down to 475 F. 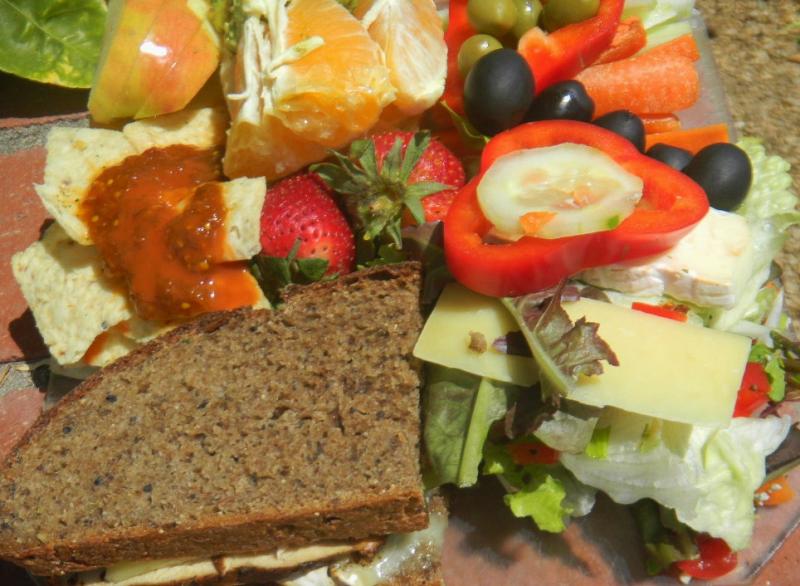 This fine tasting bread made for a fine lunch. 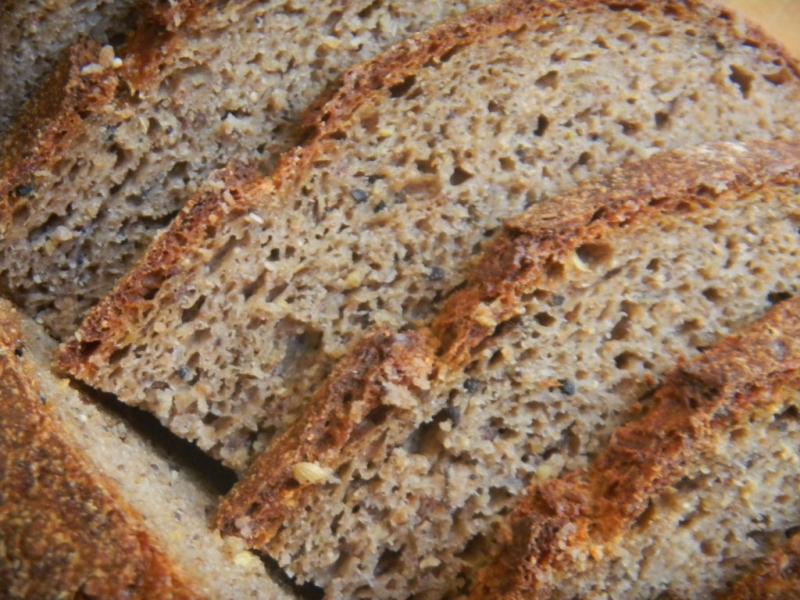 The bread browned well and had tiny blisters but didn’t spring or bloom much.   I think it was just too cold coming straight out of the fridge.   At the 25 minute mark, it only read 135 F about 35 F lower than normal.  Maybe it was the whole grains and high hydration that kept the dough cooler than normal and stopped the spring from really getting started. 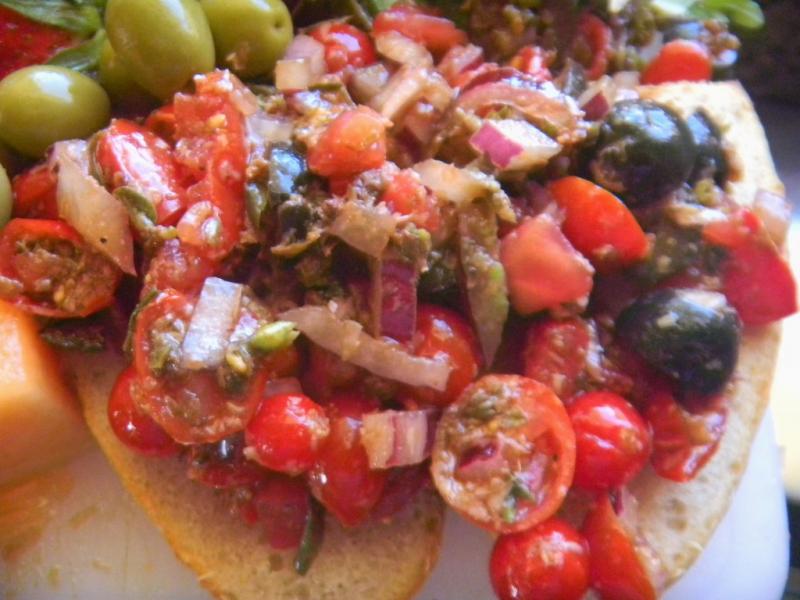 We will see what the crumb looks like for lunch but it sure smalls great cooling in the rack.  The wait for lunch is over and the crumb came out soft, moist and fairly open for a 107% whole grain bread, but it is the taste that really stands out and why we love these breads so much.  The deep color of the crust and crumb is due mostly to the whole grains and honey as is the flavor.   The add ins on the flavor side really stand out and make this bread exceptional. 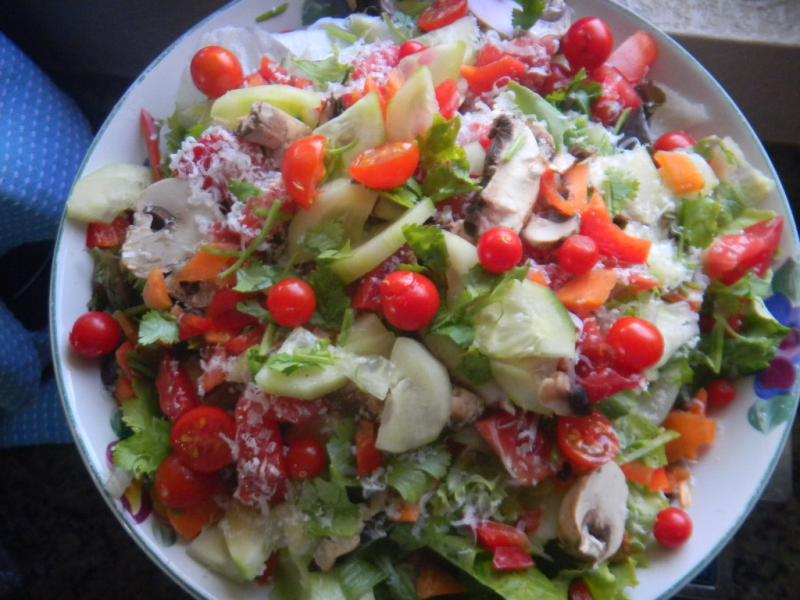 And don't forget that healthy and tasty salad! 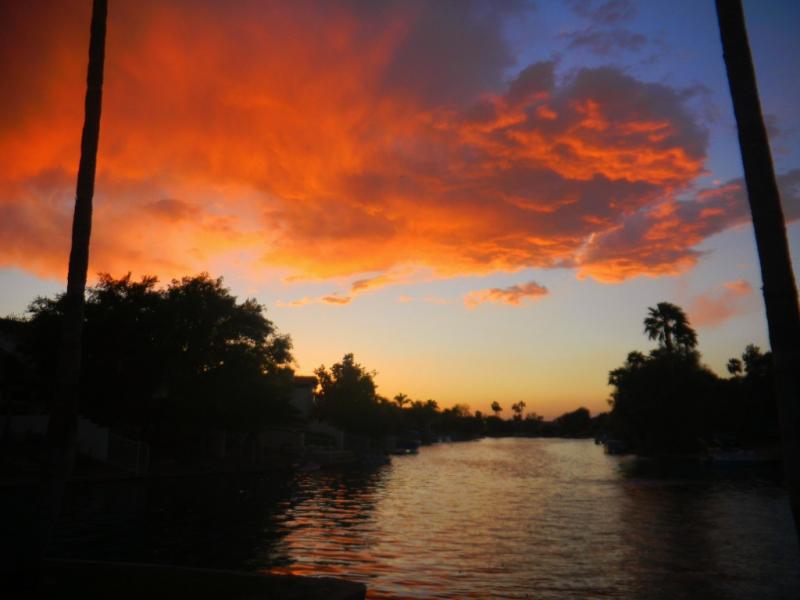 After all that white sourdough I was beginning to think you had changed yer ways! I'm happy to see thats not the case. Awesome looking loaf, bet it smells good to! another few hours? then lets see that crumb!

the smell and taste, but the rest looks pretty good too.  Lucy can only stay in the white side for so long before she gets surly and tends toward ankle biting her master.  We like this one a lot WS and bet you would too!

Wow what a build. High hydration is some tricky stuff, good on you for knocking it out.

boule that was only 40% whole grains,  this one seems kind of dry... but this was plenty wet if you ask me!  It never really got easy to handle.    This is oine of those really good tasting breads Wing.  Glad you like it and

better than it looks - congrats on the front page highlight of your last bake!  Well done and n

I think 3 years was added to my life just by looking at the photos. :)

an eternity.....as well as a blessing:-)  Glad you liked the bread - it is hearty healthy and tasty - just plain delicious!

That should have an interestingly complex flavour.  Looks like Lucy added a bit of everything she could finds :)    Very nice.

her paws on the ground Darwin.  She wanted all kinds of other seeds, nuts and fruits in there too.    It did turn out nice int eh end and any bread that tastes as good as it looks is a winner and this one is terrific for the taste buds.  Can't wait to taste it tomorrow and toasted   Glad you like it and

Nice, The internals are as great as the externals!

I'm glad I like all kinds if breads but ones like this one are the ones you want if stranded on a desert Island with a few cold brewskies of course.  Can't have solid bread around without having the liquid kind too - even if only just to wash it down!

Serious bread that can serve as delicious meal itself.  Explain the 107% Whole Grains to me?  Are you taking us to the next dimension?

I think the lack of spring is due to the whole grain and lengthy fermentation.  I have had similar problems in the past when cold retarding heavy whole grain breads in form.  It's always worked better using cold bulk ferment and room temp final proofing(also improves the gluten development).  Final proof done warm and swift before the gentle gluten begins to deteriorate.  Decreasing your amount of levain to account for the extended ferment may also help keep it lively longer???

Regardless it must be wonderful tasting.  Good to see the high percentage grain breads back in your world.

or the 'Toady Effect  Equivalent' - but don't hold me to it.  I think Lucy found out about it online and we know how unreliable that can be!  Toadies are one of the best flavor enhancers known and consist of the 20% sifted out portion from milling your own grains, extra bran and wheat germ that is tossed in and then dry toasted in a pan.   All the white part of the flour is missing.  So, if you add 10 g of Toadies to 30 g of white flour, you are 'effectively'  back to 40 g of whole grain flour only the hard bits are now toasted and much mire flavorful.

Since there are 11 dimensions, Lucy isn't sure which one we might be taking this bread to.... but I am sure we don't want to go with it. :-)

Next time we will try the bulk ferment instead of shaped ferment.  I am pretty sure it would have been better warming up on the counter for an hour and a half before baking it too.

It is a fine tasting bread - just delicious as well as being 108% hearty and healthy.

The 107% makes sense now.  I'm gonna have to try these Toadies one day.

I myself would love a slice with some almond butter and raspberry jam.

home made strawberry jam with some bacon, sausage, fresh strawberries, a minneola and a Denver omelet with Kerrygold Dubliner cheese? 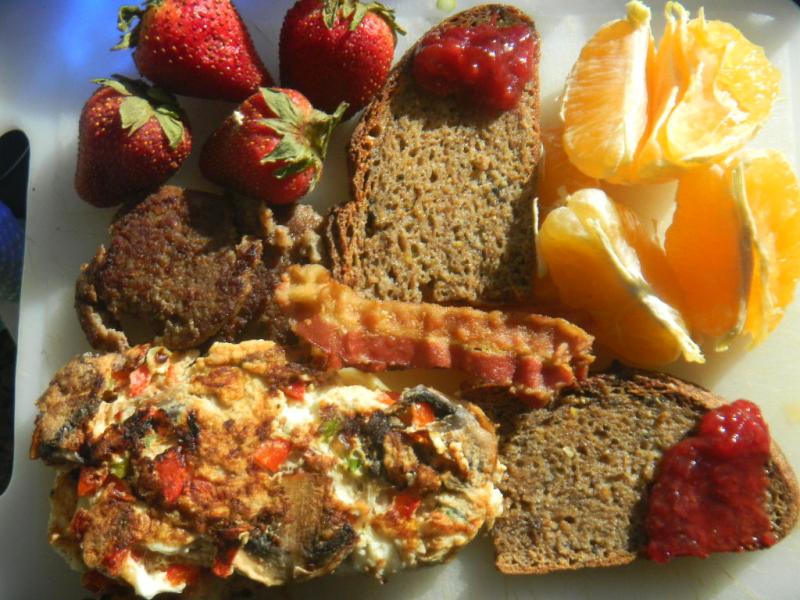 This one is a keeper!  I lover the crumb you achieved with such a high % whole grain bread.  So did you finally use your mill to grind the flour up?

I'm about to bake an interesting one.  After Varda had asked about recipes for Broa bread I found a couple on-line and finally decided to try one.  The technique to shape these are fascinating....stay tuned.

dabrownman
March 28, 2014 - 9:10am
I started using the Nutrimill and the Mini Nutrimill

that came with it about mid February or so.  It is the most, at $159, we have ever spent for bread making by far ...but you don't see these at Goodwill and it is a fantastic mill.  Does what Lucy wants it to do very well every week, without costing an arm and a leg.  Can't beat it for the value.  Will never need another one and couldn't beat that Christmas price on Amazon anywhere else.

Your huge collection of apprentices would love this one.  Had it for breakfast as buttered toast with strawberry jam this morning.  Put bacon, sausage and  Denver omelet on top.  Tough to beat that - just delicious !

So are you doing any sifting to make a high extraction flour or just doing what I've been doing which is grind it fine and mix it up?

because the bread was 100% whole grain, but usually i do. I want to sift out the 20% of the hard bits and feed them to the levain for the bread.  That way they get as wet for as long as possible, so that they will as soft as possible plus sitting in that acid longer than the rest of the flour has to soften them up some more.  The starter and levain love these hard bits and don't seem to  mind at all being fed them  I think they like them better to be honest.  I am grinding with the motor on full blast and the knob at 11 o'clock to 12 o'clock which as a slow feed I think.   I get 18% - 20% extracted out every time using my sieve which is perfect to feed a 20% levain bread.

I donl't mind sifting if it doesn't take so much time to grind it too.  The crumb is always better with the hard bits fed to the levain.  Plus I usually refrigerate the levain for 24 hours after the 3rd feeding too which helps the acid work on it too.

Those nice white breads with 20-40% whole grain in them,  have the 20% sifted out and that is what I feed the starter when i build it back to 100 G.with the rest of the hard bits go into Toadies so nothing gets wasted.

what kind of sifter are you using?  Do you know how fine the mesh is?  I was trying to find a good source to buy some drum sifters but have yet to find a reasonable priced one.

bit it is has a very fine, double mesh, interwoven screen that is 18/10 stainless made in Italy by Piazza.  I got it for a buck at Goodwill.    Works just perfectly for extracting out 20% of the hard bits using the Nutrimill with one pass. 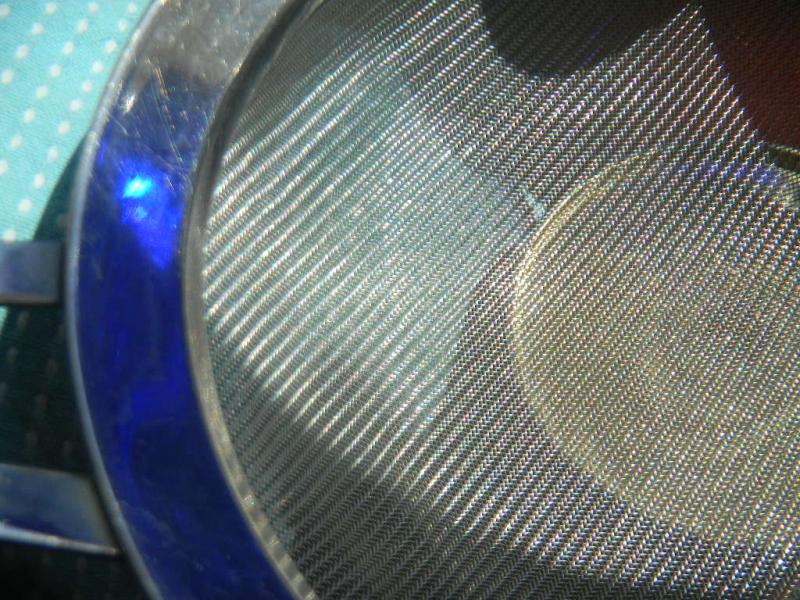 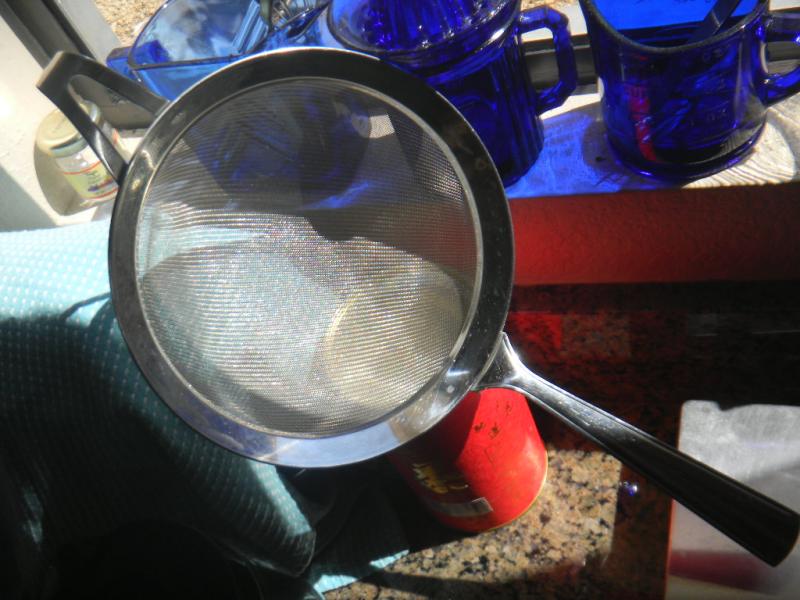 Another great whole grain bread from the man.  I like the addition of Farro...something I have been experimenting with as a dinner side, boiled and turned into a risotto-esque dish.

Keep that sun coming up and down!  Can't wait for another go of nothing but...

We like farro in salads to.  It is a versatile ingredient for sure.  It won't be long now before the temperatures scream out of the 80's, through the 90's and into the 100's here - before we even know it.   It is sure to be warm when you get here in May - just the way you like it