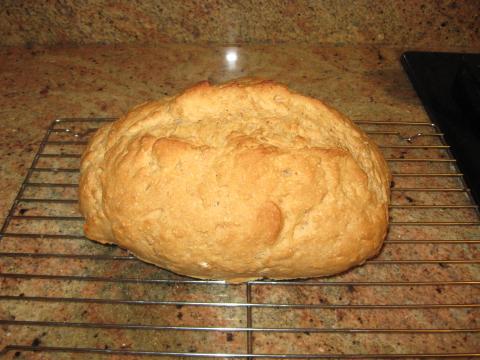 I'm seeing more people, for various reasons, take up gluten-free (GF) eating.  I've always been hesitant about trying GF loaves because of head-scratching over the various gums needed to replace the gluten that's not there due to no wheat being used.

In the latest edition of the "Bread in 5 Minutes a Day" series, there's a new chapter on GF baking.  Based on how much I like the Francois/Hertzberg techniques in general, I thought I'd give this one a try.

First off, the formula I calculated for the gluten-free crusty boule, based on the weights presented in the book:

* - And what, exactly, is xanthan gum?  Bob's Red Mill has the most accessible definition:

Xanthan Gum is a plant-based thickening and stabilizing agent. It is named for the bacteria, Xanthomonas campestris, which plays a crucial role in this description. Technically speaking, xanthan gum is a polysaccharide, which is just a fancy way to say "a string of multiple sugars." To create xanthan gum, the Xanthomonas campestris bacterium is allowed to ferment on a sugar. The result is a gel that is then dried and milled to create the powder substance. 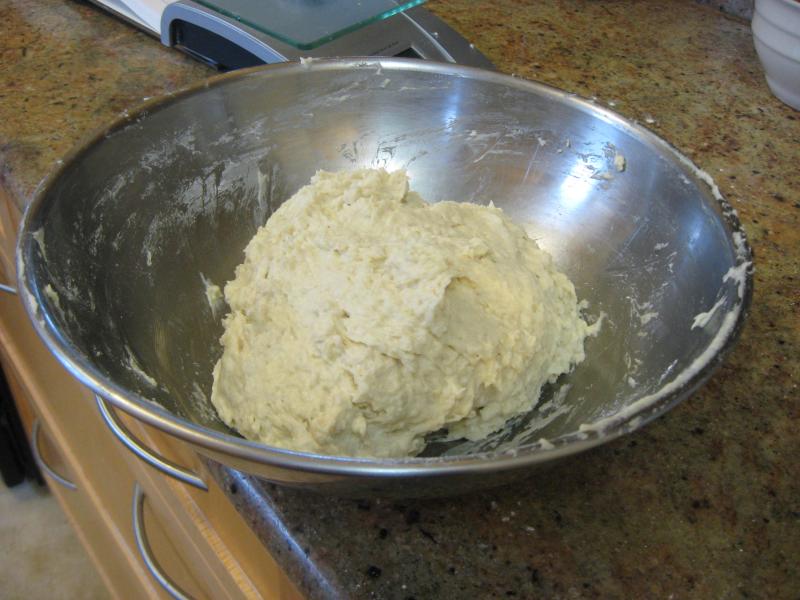 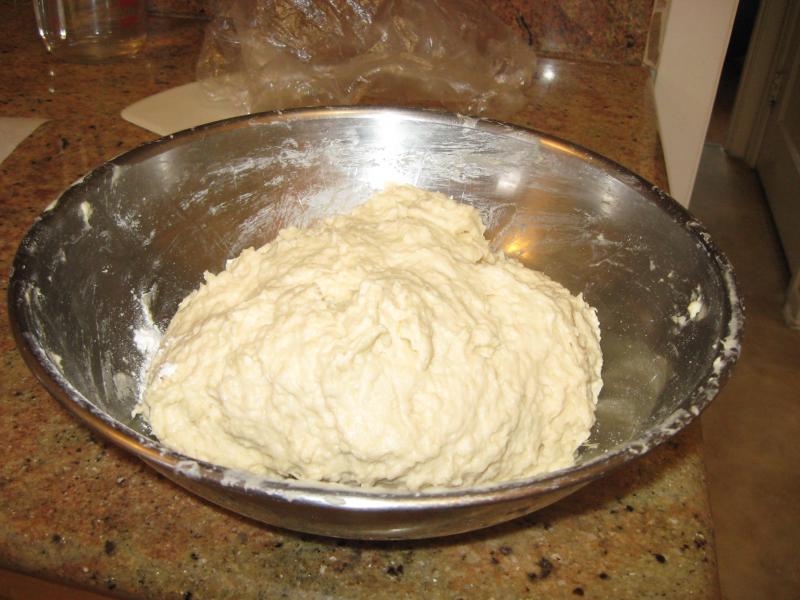 "Dough", in the conventional sense, it ain't - think more a dense, almost marshmallowy batter instead of a dough.

Here's what it looked like, shaped on parchment, ready for a one-hour proof (you mould it more like clay - or dense meringue - instead of stretch and form like regular wheat-based dough): 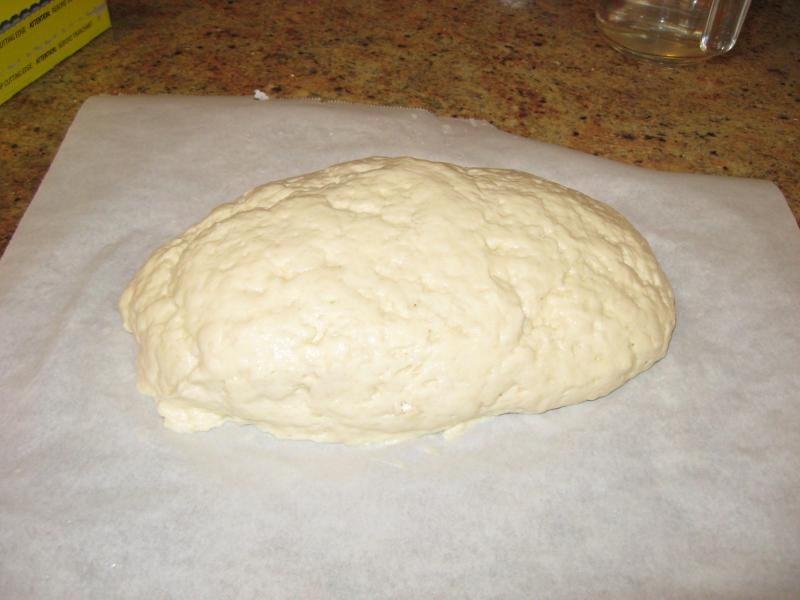 Into a preheated 450 degree oven onto a baking stone for 45 minutes, and here's what came out: 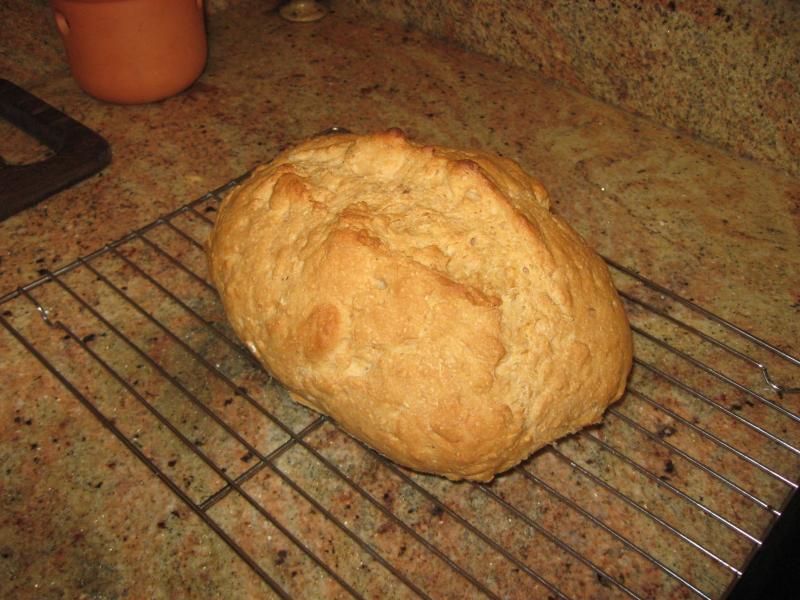 It had the feel of a dense meringue, but still crusty. The most unusual aspect was that instead of a wheaty baked-bread smell, you can smell more of a nutty - almost peanut buttery  or roasted peanut - scent.  Different, but still pleasant.

After fully cooled, here's what the crumb looked like: 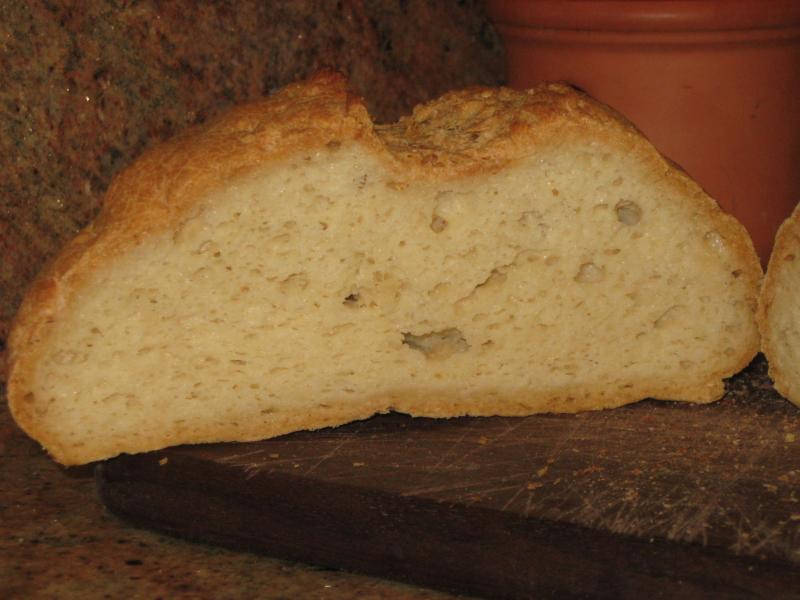 The crumb is VERY soft and delicate, almost a cross between cake and marshmallow.  The taste was a touch salty, but that's likely because I used a bit more salt than in most of my formulas.   Also, the more delicate flavour of the different flours used here wouldn't mask the taste.

It's not a white wheat-flour boule, by any means, but compared to some frozen GF products I've seen, it's not a bad bread-esque experience.  Would I eat it day to day?  Occasionally, now that I'm not scared about making it anymore.  And if I couldn't eat wheat bread ever again?  It would be OK.

If you bake wheat bread, and have loved ones or friends who can't eat gluten, this one is worth a try and yields a reasonably good result.  Just remember this is a bit of an analogue, not a replica, of bread.

I'd love to hear from anyone else who's tried this, especially re:  how it stands up to freezing and toasting.

This recipe is the first GF bread that I ever baked.  My results were very similar to your own, although you had better luck shaping your loaf than I did!  I separated it out into two loaves, and the second loaf I cooked after several days in the fridge.  It had a more sour, fermented flavor which I liked.

I was responding because I wanted to point out that many people in the gluten-free bread baking world are moving away from Xanthan Gum.  I use psyllium husk now to substitute for the gluten.  It's a lot more nutritious than xanthan gum, and it gives the dough a much more flexible, gluten-like feel.  I believe that Shauna Ahern of Gluten-free Girl was one of the original creators of this recipe, and it was on her blog that I first heard about psyllium husk.  Check out some of her more recent recipes - or mine! - if you want to tackle GF bread again!

.... about psyllium husk and the (apparent) fermentation in the fridge - will have to try a day-or-two old bit of dough the next time I feel brave enough to bake GF.