So with all the rave and some down time I thought I'd give this FreshLoaf classic a try.  I believe I followed David's (dmsnyder) most recent update which includes whole wheat.  I strayed from the procedure only in that I mixed the dough with my stand mixer opposed to by hand (slap and folds). I also used excess starter I had on hand which is of the sour variety and I think this may be a bit better with a less assertive levain.  But then again I prefer balance to overly sour white breads.  Some really love the sour punch.  Outside of that I gave it two stretch and folds at 45 and 90 minutes followed by 21 hours in the fridge.

I made a larger batch tripling the formula posted.  I got 4 larger loaves (700g each) plus some scrap dough to use as pate fermente which I'll put in some pizza dough later this week.   I shaped two into batards and two into oval bannetons.  Had some loading issues with the batards so not quite as handsome as I'd have liked but certainly the preferred shape for this loaf.  And my last mistake was not baking them darker as they softened up a bit mroe than I'd hoped.  This is a very sour sourdough (maybe due to my levain???) with a wonderful crust while its still crunchy. I'll have to tinker with this a bit more.

the somewhat mangled batard with half an ear.  Other looked even more mangled. 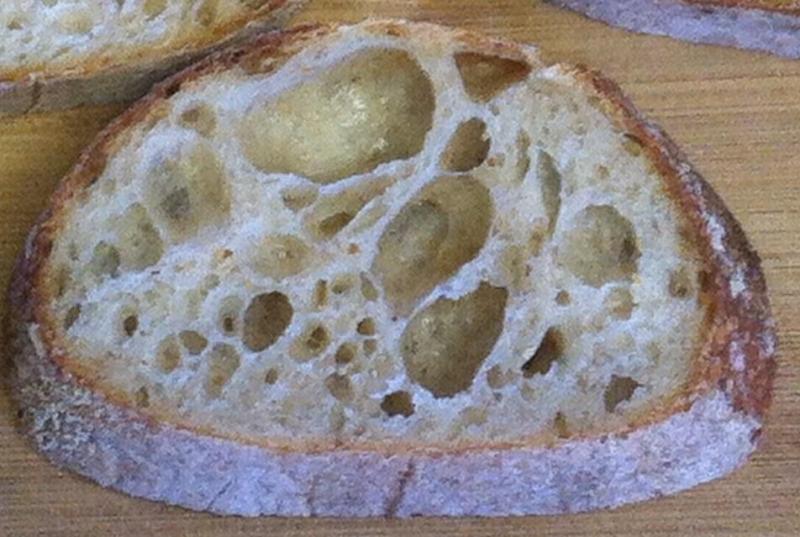 crumb from the batard 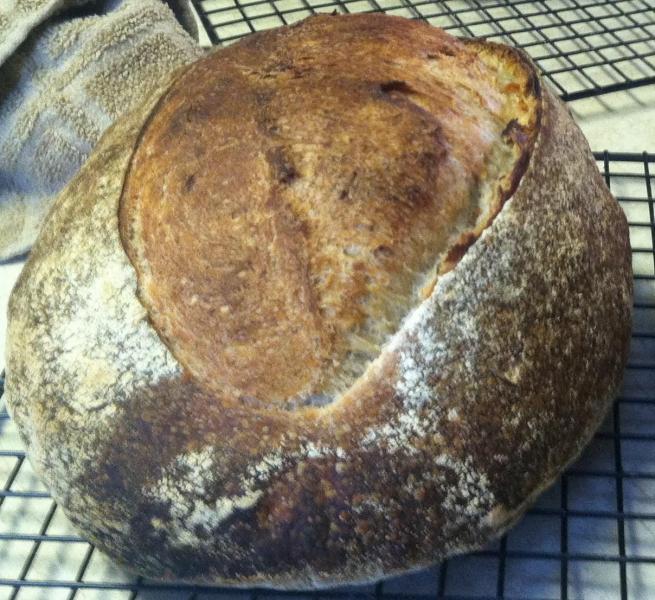 From the oval banneton which if it was a longer bowl may have worked out nice.  Its a bit too scrunched and tall for this type of bread. 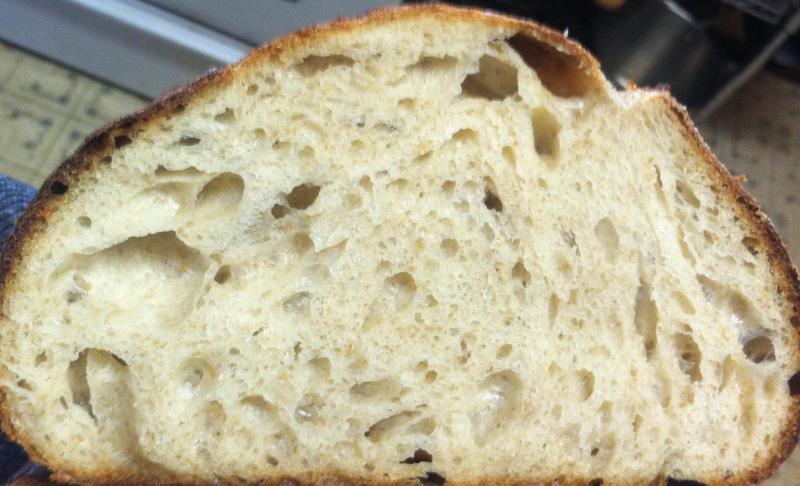 and the crumb from the loaf in the bowl.  Not quite as open.  Might have needed a slighltly longer proof but the batard was ready in 40 minutes and i followed suit as it seemed ready.

What a gorgeous looking bread you have out there. You should feel proud.  I am longing to achieve these kind of results one day. Well done Josh :)

I hope you keep tweaking until it's how you like it.

I just botched it a bit. A couple refreshing of the levain would make a big difference.

A question though as I haven't tried the original recipe and went straight to your most recent variation. Did you ever change the hydration when you increased the whole grain?  So many say how wet this dough is and I found it rather nice to work with.

I anticipate it crunchy toasted with eggs in the AM

The most recent tweak involved substituting some ww for some medium rye. The whole grain total didn't change, and I didn't change the hydration.

Now, this is a sticky dough compared to, say, a 65-70% hydration baguette dough, but I'm sure you can manage it with a judicious dusting of flour and an occasional touch of the bench knife. ;-) It may be a challenge to a less experienced baker. I know it took me a while before I was really comfortable handling slack doughs. On the other hand, I sure learned a lot about dough handling working with it.

The SJSD is really tasty fresh-baked. It has a good shelf life too. But most of what I bake gets eaten either toasted with almond butter or as French toast. As a matter of fact, I just finished having a breakfast of French toast made with SJSD baguette. Yum!

I must have mis read. I thought you put ww in place of some white flour.  Fresh this bread is what I think most want when they say they want great sourdough. Smells amazing while it bakes.

Dought is certainly wet but handles nicely out of the cold box.

So on a 1-10 how sour is this loaf when u make it?  Just curious if my aged levain really pushed this too far. Taboot what is your DDT?  My dough was 77 f after mixing. Which also added to the souR.

i will get some maple syrup today for French toast tommorrow. Do u dry the slices out when u make this?  I suppose it might make a good bread puddin too. Egg Sammi today French toast tomorrow.

Well, if you go back to its origins, it started out as a T55-based, fresh yeast leavened baguette formula. The substitution of 5% rye was one of the first changes.

I think, when most people around here think of sourdough bread, they think of San Francisco Sourdough, which has a less open crumb and a thicker, crunchier crust than the SJSD.

I agree that the dough is easier to handle while it is cold.

On a 1 to 10 sour scale, I would say that I usually make the SJSD at about 4. I have increased the starter by 50% and by retarding for 36 hours. Both increased the sourness, but I prefer it with the (approximately) 21 hour cold retardation in bulk.

I haven't measured the dough temperature.

I don't dry the bread before making French toast, but it is usually 3-4 days old. When I use baguettes, they have been frozen as soon as cool and then thawed on the kitchen counter overnight. However, I do dry slices in the oven to make croutons for salad or for soupe a l'oignon gratinée. Hmmm ... Did I mention that SJSD makes terrific garlic bread (brushed with garlic-infused EVOO and toasted under the broiler)?

It's lunch time, and I'm hungry!

That looks delicious! It is really interesting to see how two loaves from the same batch of dough can vary. I think I learn quite a lot from doing that. I find it very hard, even with copious notes to keep track of all the variables at play.  I love the crust colour too.

That crumb on the batard is just the way it is supposed to be  - if David's examples are the way they are supposed to be :-)  Love the nicely blistered bold bake too.  I tweaked it to my liking with more sour and mixed whole grains 20-30%.  This is one of my 3 favorite David Snyder breads - that swept the top of Lucy's top 5 in 2012.

All credit shall be David's as it is his formula.  I'm gonna give it another crack with a younger levain and see if it tames the sour to my liking.  My levain was peaked but retarded for 36 hours before making the dough.  That added some serious twang me thinks.