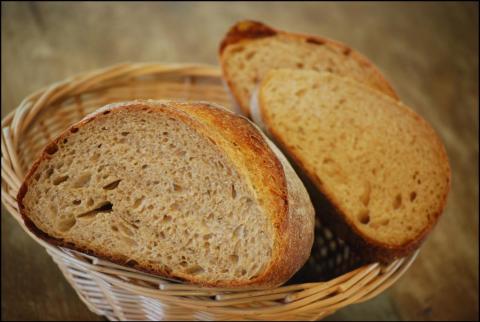 Good effort, however I suspect that your shortcuts may have diverted way further from the original than you might think. Without trying your bread I can tell you that it takes far more to produce αρκατένα than just adding chickpea flour to a sponge - levain or dough. In fact I don't believe it's a good idea to add chickpea flour at all. You also need the enzymes that exist on the skin of the chickpeas, which are mostly absent in the flour. There is a reason the process for making αρκατένα sponge is so long. The chickpeas are not used for texture or their no gluten properties. The reason they are used is the special taste produced by the long process of making it. It is a taste that doesn't exist in any other bread I have personally tried. It does not remotely resemble hummus and the bread is not sour either. On the contrary it can be slightly sweet. It is also true that no herb is used in the original because we are averse to cover the bread's unique taste. What we do is we brush the top of the bread with a honey mixture for the last few minutes of baking. Greetings from Cyprus.