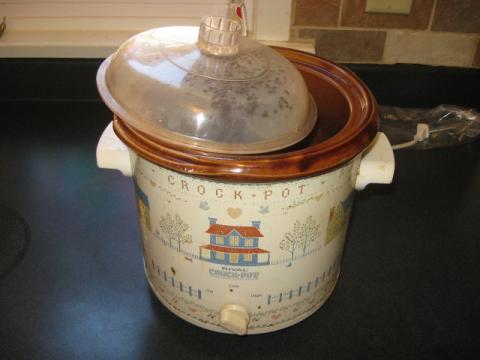 I was reading online this week about baking bread in slow cookers (more here and here), so I decided to make a 3.2 kg (~7 lbs) batch of my house loaf - here's the formula .... 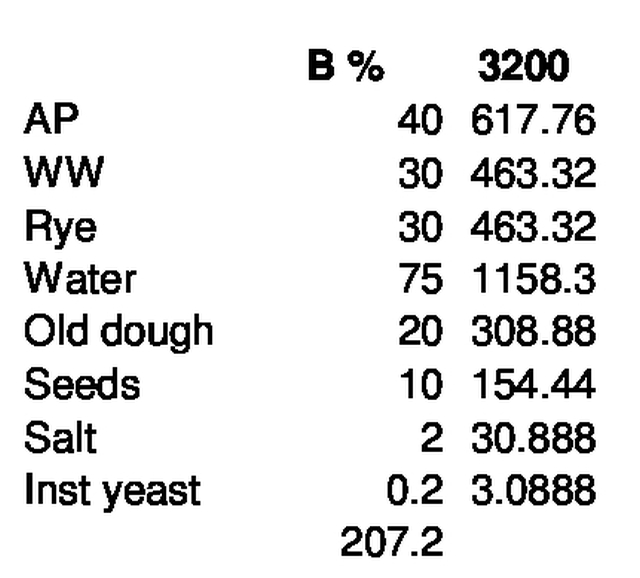 Whipped up the dough, fermented it overnight in the fridge, shaped up the boules and proofed them (three in cane bannetons, one in the slow cooker ceramic insert lined in parchment paper) for about 90 minutes at coolish room temp.

I baked the oven boules on a stone, 500 degrees for 9 minutes with steam followed by 45 minutes at 400.  I baked the proofed crock pot boule at "high" for two hours.  In both cases, the internal temp of the bread ended up ~200 degrees. Here's what the slow cooker version looked like out of the pot:

After removing the crock pot loaf, I crusted up the top for 3-4 minutes under a high broil.

Here's a compare and contrast shot, with the boule trio on top, and the crock pot loaf down front.

The boules came out with the usual nice crust.  The crock pot loaf came out VERY soft - when I first poked it after the two hours, it didn't feel quite done.  Checked the internal temp, though, and it was up to 200.

The crumbs?  Not a gross amount of difference ....

Both tasted about the same, with the oven version (not surprisingly) having a much nicer crust to chew on, and the slow cooker version being moister overall (again, not surprisingly, given its cooking in a steam environment).

Yes, you can bake bread in a slow cooker using artisan formulas, and it comes out like a nice, soft sandwich loaf - probably close to how I imagine it might come out in a bread-making machine.

No, the crust won't be anywhere near as nice as doing it in a hotter oven.

That said, it might make an interesting "steam bread" tool, or could be a last resort for someone truly desperate for some home-made bread without access to an oven.

I love that excessive softness and I never liked the crust, anyway. Now I wish I didn't get rid of my slow cooker (that was a huge resource hog). Wholemeal breads don't  come out always so well in bread machines.

.... it sure came out that way in the slow cooker.  Don't know how much of a "resource hog" the slow cooker would be compared to the oven, but I don't think it sucks up that much power.

bread spread and the slow cooker rose - maybe it was just constrained more and had to go up rather than out. What an interesting experiment.    I have used the slow cooker insert and lid to heat up in the oven after soaking and used it as DO's for bread.  Then you get the  boldly baked crust and the rise :-)

.... from using the ceramic insert from my slow cooker in the oven is the fact that the lid is plastic :(  We don't have an equivalent-sized glass top, or I would have done that earlier.

In spite of the "out vs. up" bake, both had comparably soft crumbs (although the "up" had more of it without a crispy crust).

This came to me well after the post and our exchange.

The slow cooker is also different from the oven bake in that it replicates the "put the dough into a cold oven and let it heat up" approach.  Methinks that also affects how the bread turns out.

Hi.  I've started making bread in a slow cooker we recently bought.  I'm curious to know if you ever tried this again or if you have any tips.  Specifically, would you consider reducing the hydration because it is in a slow cooker?  Also, would it be better to start baking with warm dough, or did 90 minutes give enough time for the dough to warm up before baking in the slow cooker?  Thanks.