I've been musing on what all I want my next oven to be, starting again from scratch. It should:

Have a large baking chamber.

Be able to add more heat while baking for multiple batches.

Be easily modified if I want/need to change it.

Be unencumbered by traditional designs.

With the above in mind I decided that a less efficient rocket design would be better, at least in my case, than another traditional masonry beehive black oven.

A couple links have stood out.

Basically a scaled down version of the first link is what I had in mind. only change some parts to metal lined with firebrick, others with masonry, depending on what I can get ahold of.

Let me know how that works for you.  It has some positive qualities but I also see some big drawbacks.  This oven is just a modified white oven.  The big problem I see with this oven is the buildup of soot around the baking chamber.  They recommend cleaning this space every 6 months..but how do you get access to that area without dismantling the whole oven?  Now for baking bread you have the floor for thermal mass yet nothing on the walls or ceiling.  Now I'm sure it will bake bread and other things...but will it be of the quality expected of a WFO or the quality of commercial steam injected oven?

I agree that soot (and ash) building up in places is a consideration. The rocket heaters I've seen (online) have at least a couple clean outs, definitely something to keep in mind while designing and building it.

I also agree that a bit more thermal mass would be a good thing. Maybe at the cost of longer firing/more fuel used, but would give better results in both more stable oven temp and better pop from loaves.

I'm speculating that the needs of the Uganda oven probably are low cost, limited hardware, fast firing times and low fuel use.

My last two WFO ovens have left a lot to be desired, but they were learning experiences that I got a lot out of. I have low expectations for this project, other than I do expect it to bake bread and be redesigned/built after I figure out what I'd prefer out of an oven.

I don't think it will be the quality of either oven, at least not initially, but maybe with time maybe it could be a new style of design.

no mortar brick 6"x6" rocket stove in my back yard that puts out some serious heat around 750 F 2' off the ground with the fire box on the ground.    It burns twigs,of course, rather than fire wood.  I designed an oven that had 2 of them 60 degrees apart at the back of the oven with the flu in front like a regular WFO.  The chamber was only big enough to bake 4 loaves of bread or two pizzas at a time.   Haven't built it yet but know it would fire easily, get to 750 F and be much lass costly to operate than a WFO for home use.  Someday, if I can find a source of twigs, I will build it.

What i like most about it is that the fire is stoked and controlled from the outside and not in the oven chamber.  Makes oven cleaning and stoking a breeze.

How was the bread?

on the rocket stove since it isn't an oven but naan in CI skillet would work and I will have to try it.  I haven't built the oven yet as i don't have access to anywhere near enough twigs.

Here is a picture of the stove. 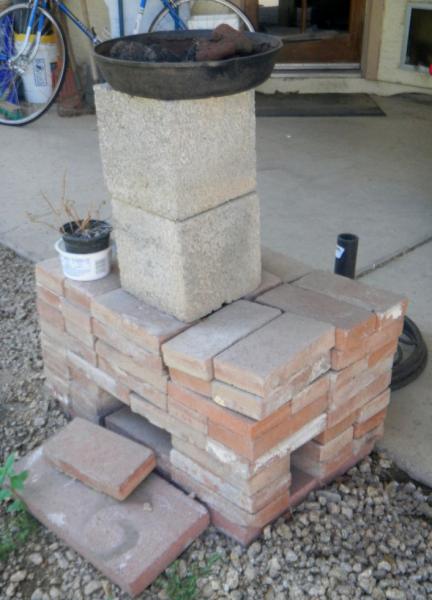 I have more twigs then you can shake a stick at...(pun intended).   I can send you all the twigs you want, the twigs are free but shipping would be a bugger.    I like the concept of a white oven and still working on a few designs of my own.

The oven in the first link ..I was thing about it today as I was laying tile.  Is actually a big Dutch Oven or as a kid we called them a camp fire ovens.  One of the problems is the floor gets too hot.  That is why they are cooking on a grate.

I have a truck load of fire brick and have been thinking of building a smaller version of my designs to see how they work.

A couple ideas to keep the floor from overheating...

What about using one, or more, layers of less dense firebrick to cut back on the heat transfer.

Or build the firebox offset and just pipe some of the hot gasses underneath, the rest through the walls.

Or even just change the problem to one when firing and baking and let the fire die down somewhat when you want to bake. Relying on the heat stored in thick bricks lining the oven chamber.

Of course this is just at the planning phase, so bells and whistles don't seem like much of an issue. Once it comes time to build, I may not be quite so ambitious.

I really want to build something like that before winter.

I got my old oven demolished and was able to salvage most of the firebrick from it. I got the new oven mostly built and fired it without insulation. 250f max. Got it insulated and fired again. 380f max, but it took 3 hours to get there. I decided that it needed a much larger burning chamber and just got in from putting the insulation around it and lining it with firebrick.  With any luck this will be the right design and I can get back to baking.

New ovens are always slow to heat.would love to see some pictures and designs.

I kinda let the oven just sit last year. Come spring the foundation had shifted and it was in danger of toppling over.

A extensive rebuild later it worked, but had issues with burning a huge pile of wood (by my standards) Around the 13-14 kg mark, to bake 9kg of dough. It also took 3 or so hours to get up to 550f, but as soon as the fire was out it would rapidly plummet, then gradually cool, still being around 300f 6 hours later.

I haven't taken pictures, as to be perfectly honest the thing is a huge eye-sore. Visualize a box covered in pink fiberglass insulation (only grey) wrapped in chicken wire. I tell myself it's not about how (bad) it looks, it's about how it performs, and other than the heating drawbacks, it actually does bake very good bread.

At least it did bake well, I tore it apart again (7th oven build overall) and just need to find time to mill/bake again.