Hi guys! It has been a long time since I've written here. Meanwhile I have started a Romanian cooking blog, where I have began to post stories about some of the breads I am baking. I wanted to show you some pictures of these two breads I made. I will try to share more often also here my experiences with sourdough.

So here is the potato bread, a very tasty bread, which filled my whole house with the smell of roasted potatoes. You can check the formula here. The dough was retarded overnight in the fridge.

And next you can see my Rugbrød, a delicious wholesome rye bread that I keep baking from time to time. The formula can be seen on my website here or you can check directly Chad's instructions here.

Besides that I do have a question to you regarding the stretch and fold technique. Since a while I have given up taking the dough out of the bowl and doing the SF the classical mode. Instead I am just making four or five "stretches and folds in the bowl" (same movements as for kneading, covering a whole turn of the bowl). The smooth part of the dough remains on the bottom on the bowl and I take it into consideration while shaping the breads. I haven't been noticing any difference, but then again I have not been baking so much lately. Do you think it really matters how you make the SFs? My impression was that what is essential is to somehow break some of the gluten connections, so that the dough creates besides the old ones, new stronger ones. What do you think?

Happy baking to you all!

Hi, Andreea. Just checked your Romanian blog. Even though I cannot read Romanian, it seems very well organized and illustrated.

Every time I come across a text in Romanian, I wonder how you kept a Latin language alive while encircled by peoples that spoke non-latin ones, one of them, Magyar, not even an indo-european language. All the other main languages spoken in countries immediately around Romania are indo-european from the Slavic family.

Have a great weekend!

Well, we do have a lot of (late) foreign influences in our language. The structure of the language is latin, the grammar, a lot of the basic words. On top of that there are many Slavic words, then also Turkish, Greek and so on and so forth. The region of Romania was roamed by many different migrating peoples, all of whom left influences in the language or the manners of Romanians. Then, we have been for a long time under Turkish rule, between the 15th and the 19th century. These late influences in our language makes it difficult for speakers of other Latin languages to understand us, while it is very easy for us to understand and learn Italian or Spanish for instance.

It is not so easy to explain why our language maintained it's latinity. It is also interesting to state that despite the fact that Romania didn't become a single country till 1918 (so before there were three little countries and in the Middle Ages many more) and despite the fact that Transilvania was for hundreds of years under Hungarian rule, there are no Romanian dialects. Only the accent changes in different regions and some regional words appear.

A theory would be that, because of "Dacia" (this is how the country was called before the Romans) being a border province, it was colonized with a lot of Latin speaking colonists (and with few colonists from the provinces). This resulted in the very rapid colonization of this region (169 years). After the retreat of the Romans, Dacia became very rural and thus the historical sources are almost nonexistent. It is very hard to state what happened in the early phases of the development of Romanian. The oldest documents in the Romanian language are from the 16th century. This late date could also be explained by the fact that beginning with the 11th century, in the Romanian little countries the Church language was Slavonic.

An explanation I give myself as to why Romania didn't become afterwards Slavic is the christian orthodox religion. The area of Romania was christianized pretty early, even before the 4th century. The first attested Romanian priest was a martyr who died in 304. Bulgaria for instance converted to Christianity on the 9th century. So I think these proto-Romanians defined themselves against the invading or neighboring peoples through their religion.

It is an interesting subject, worthy of exploring.

a low wide dough bowl to do stretch and folds in the bowl too.   I just grab the 4 cardinal compass points pull them out to stretch and fold them over the top,   I do 3 sets of 4 pulls each time about 15 minutes apart but that is after 10 minutes of slap and folds first since my dough is usually a higher hydration.

I see. I proceed similarly with very hydrated dough. I am using this method (but only one turn of the bowl) for normal doughs. All best!

of the bowl, the  won't get enough gluten development. You need to do this at least 3 times on 15 minute intervals.

What I don't grasp exactly would be why the 4 classical SF movements would be enough, but 4-5 stretches of the dough in the bowl not. I guess this is my dilemma. For instance this is what I did for this potato bread and it turned good to me. After 50 minutes and 100 minutes of fermentation, 4-5 stretches in the bowl instead of SF.

one turn for me is doing a pulling stretch (donlt be shy)  from each compass point and folding it into the middle - 4 Pulls and 4 folds = one turn.  I do this 3 times ( I call then sets) on 10-30 minute intervals depending on the recipe,.

Yes, I misunderstood you. Sorry. I meant the same thing. For sourdough dough that isn't that wet I do two sets (exactly as you described them) every 40 or 50 minutes. Thanks for your replies. I just wanted to check if my way is proper or not. All best!

Hi Andrea. These breads are very nice.  I am a big fan of Chad's Rugbrod and you did a great job!  Makes me want to bake this one again soon.  The arm sure gets a nice work out from this dough!

Thanks. It is one of my favorite breads too. I forgot to mention that I sprout the rye berries for this bread. I don't know if because of this, or because of the long fermentation, but this bread is very easy on the stomach. The dough is very very wet, like a cream, I knead it (or should I say mix it?) for only 2-3 minutes. All best!

Interesting.  The formula I worked off of required about a 15-20 minute mixing by hand.  If you got the right consistency then that's all you can ask for!

I followed the instructions from here. The only changes I made are that I didn't use spelt flour but whole wheat flour, that I replaced the pumpkin seeds with sunflower seeds and that I sprouted the rye for a day or so (till the buds were 1-2 mm). Since there is so little gluten in this bread, I didn't see why would it be necessary to mix it for so long. I mixed it for a few minutes only to have everything evenly distributed. I've done it several times like this and it always came out proper. Unfortunately this photo of the crumb is not very focused so that you can properly see how the crumb is. I only have this other pic of this bread, but it's still not very good. 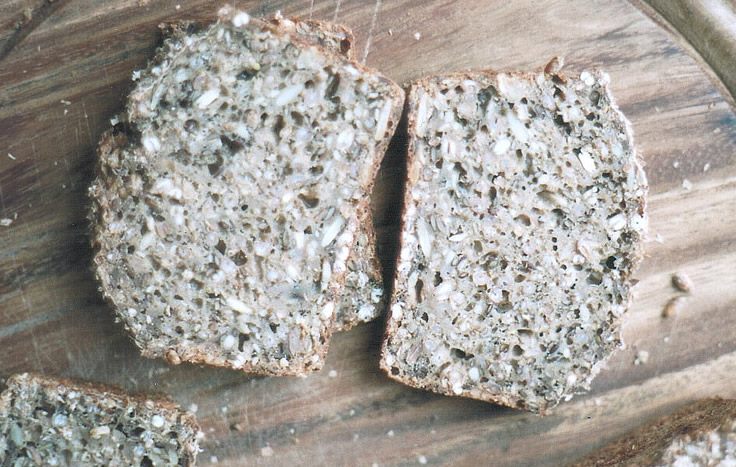 Yes, I worked off of two different formulas and they both asked to mix for that long.  Maybe I will try this method to give my poor arm a break.

Either way, yours looks great.

And I will try to knead it more and then check the difference. All best to you!