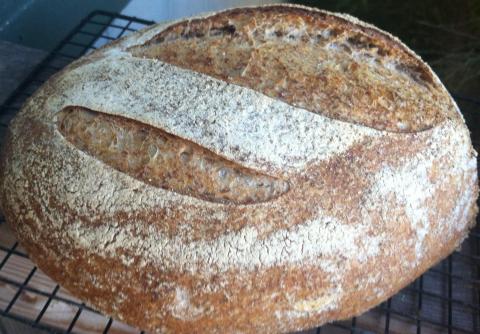 So I have been mostly creating fomulas for this project with the exception of last weeks Cherry Almond which was just a slight tweak to a common formula for fruit and nut breads.  I scrolled past this formula on Yeastspotting and it looks just like a loaf I always crave titled "Peasant Bread" at a nice Artisan Bakery on the East Coast.  Unfortunately there are so many plays on the theme of Peasant Bread I couldn't just google it.  I've been meaning to contact that bakery and see if they'd be willing to share but just never got around to it.  Then on my last visit they wouldn't even sell me a small portion of levain so i could make bread for my family.  So I doubt they'd share their formula.

Anyway I used the google translate and gave this one a shot.  Its certainly possible I didn't follow the instructions as I should but I did follow what the translation "said to me"  I wanted to make some alterations but I left it alone and went with it.  I used High Protein as it translated as strong flour (I would just use bread flour next time to help open the crumb), I also used whole coarse ground rye and wheat and I'm betting they use a finer wheat and a medium rye.  Therefor even at 86% hydration my crumb isn't as open as I'd have liked but its delicious and very simliar to the loaf I craved.   I'll further add this dough was a challenge for shaping and I would have also gotten improved results with a tighter shape.  I will certainly make this again.

Formula can be found here

And for some pictures.  I'm not posting as many but I'll tell you that I got great oven spring but not so much bloom and ears formation and that is due to my shaping.  A little practice with this dough and I'm sure I'd see wonderful results.  It also may be better as a boule and all I have enough of at home are oval bowls.

* Changes I'd make.  I wouldn't bother changing my grind on the whole grains but I would deffinately go with a good bread flour opposed to the higher protein.  I'd also decrease the yeast even further to slow down the bulk fermentation a bit allowing for the folds to happen before the dough is ready to shape.  Don't get me wrong it went well but had I got this in the retarder a little less ready to go I also would have had improved results.  I would consider cutting the yeast altogether but it was part of the formula and I wanted to try it.  If I did cut it I think the levain would need to be at least doubled to compensate. 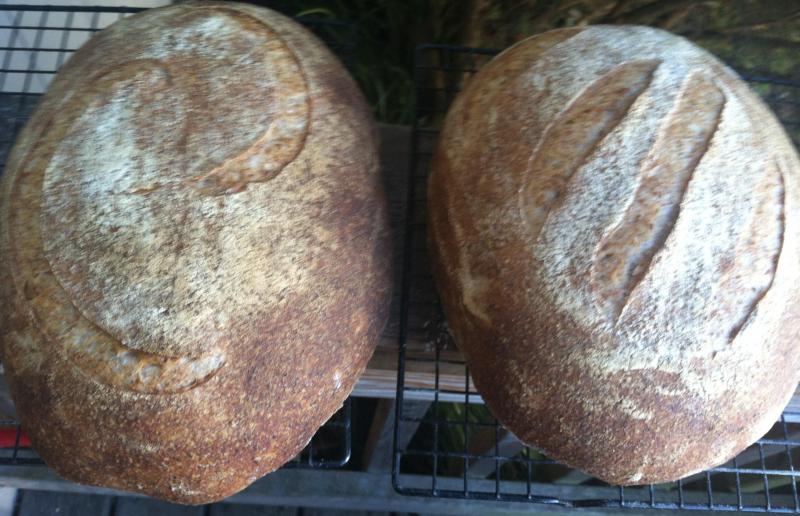 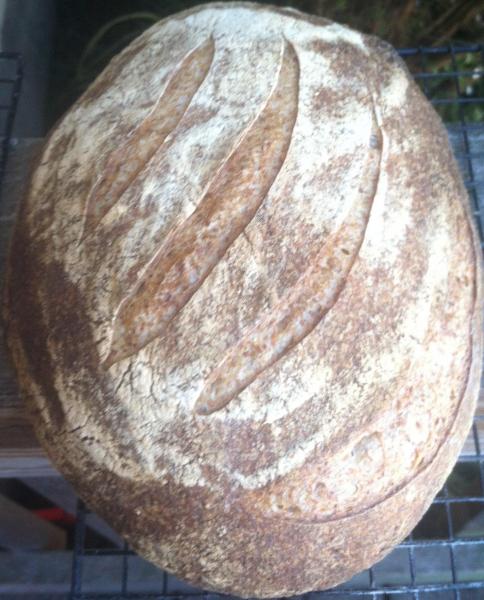 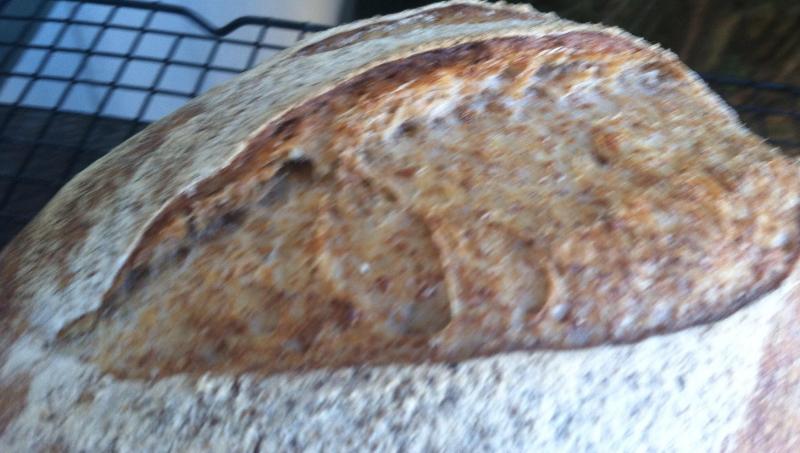 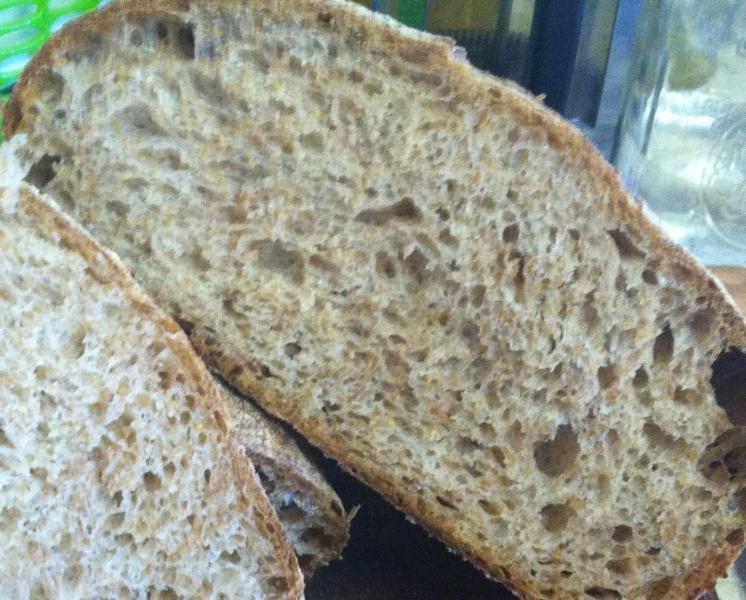 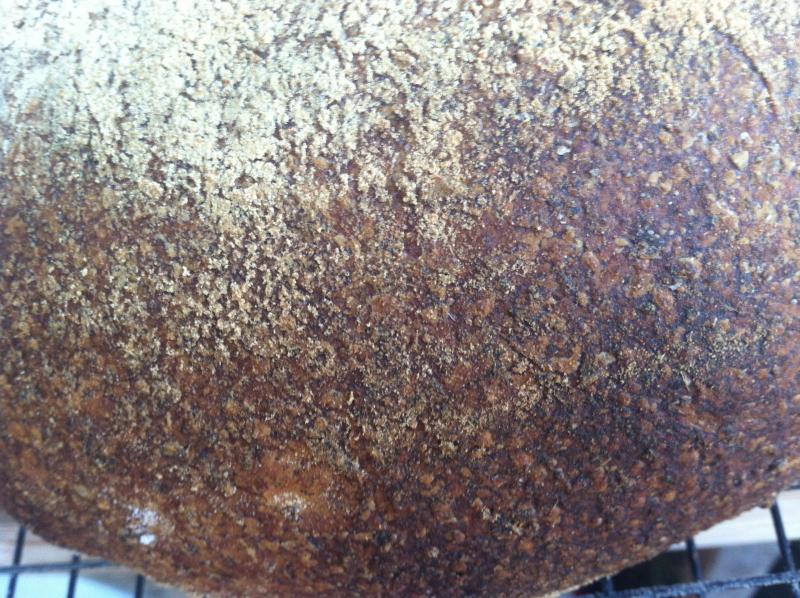 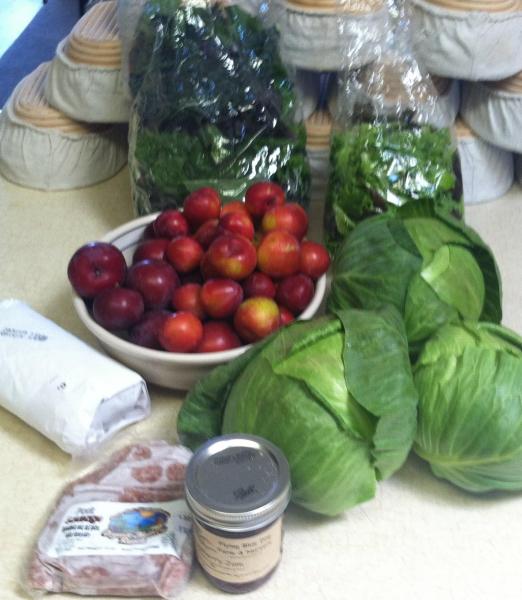 This barter trade you have going sure looks like It is paying off for both sides.  Good bread for good food is a win win...Your bread is exceptional though.

Thanks.  Yeah good trades today.  More and more farmers are down to trade too.  And some of the best peaches will start showing up next week.  The farmer with the best fruit and melons is down to trade.  I told him I haven't bothered him cause he's always so busy with customers.  He gave me permission to sneak behind his booth and get his attention.  Stoked.  Anyway this recipes certainly worth revisiting and hammering out a few kinks.  Otherwise its absolutely delicous.  It comes off as a very mild sour wheat with an earthiness which must be the character of the rye.  The curmbs is creamy and tender.  Its also very chewy.  I may have made the mistake of too much steam.  So hydrated I may have done better with just 7-10 minutes instead of 12.  Anyhoo.  Tons of fun.  I moved here cause it doesn't get very hot and its pretty hot.  80-90 is hot for me.

Great looking loaves.  Is this the 25% rye?  Too hot for me too.  Would force me to bake in the mini oven outside.  Where is "here?"  If you got peaches nearby...  Surprised me, I was reading half way down the recipe before I realized it was in German.  Wonder if this loaf is named after the Lake Maggiore region.  ???  We've had great weather the last few days.  Not too hot & not too cold.

No the week before I did the Cherry Almond with 25% Rye which came out okay.  Worst one yet.  I had some technical issues and really those almonds needed to be pistachios.  Plus more whole grain woulda be tastier.  The recipe says its from the Maggia Valley in Italy?  I live in Northern California,  way up top of the state by the ocean so i have no idea about this area. This recipe is certainly a keeper and can use some slight modifications to suit my needs.  And yes plums and pluots have made their way and peaches are next.  Oh the peaches out of Willow Creek CA rival any peach I've had the chance to eat.  I look forward to having many this summer.