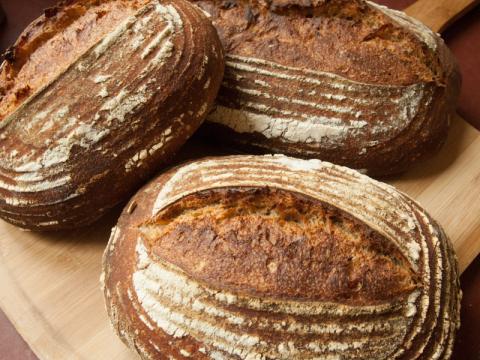 A few weeks ago I wrote about this formula, and after many suggestions from readers out there, I followed up with two bakes.  This post shows the outcome when including all the flours in the long autolyse, based on suggestions from Khalid and David.  Essentially the method was the same as previous with these two exceptions: for bake 2, the autolyse included all the water and all the flours as listed plus 3 gm salt, and for bake 3 the salt was eliminated in the autolyse and the overall hydration was increased to 75%.

Bake 2, I included the small amount of salt as a hedge against overactive enzymatic activity of the rye (and possibly the spelt) flour.  The autolysed dough was maintained at 74˚F for a little more than 11 hours, the same time to allow for the final levain build to mature. It was more hydrated than the original version, and the autolysed flours already had a nutty aroma.  Here are the final bakes: 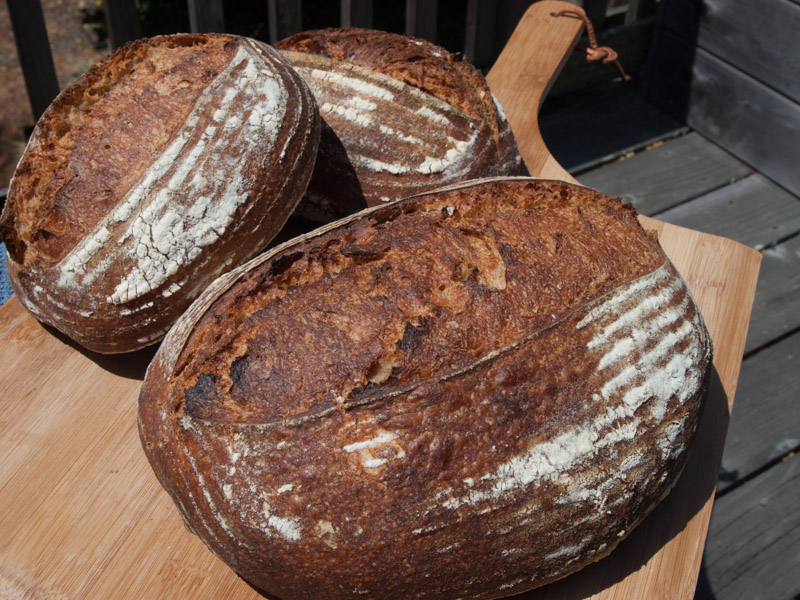 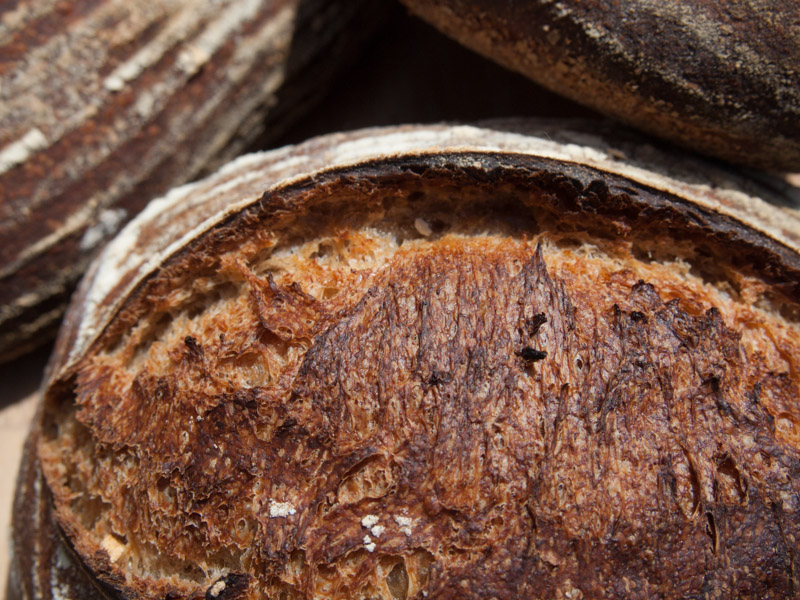 The loaves seemed more flavorful than the last time (but it may be wishful thinking), and the crumb was definitely moister.  Sorry, no crumb shot, but it was very similar to the one below.

For Bake 3, I eliminated the salt altogether from the autolyse, and increased the overall dough hydration to 75% from about 72.5%.  I also made a double batch, which turned out to be a bit problematic as I am not really equipped to handle over 4 kg of dough.  It also turned out to be an unusually hot week in San Francisco, so the bulk fermentation got a bit out of hand and I probably went too long.  This made the dough a bit sticky and more difficult to shape.  Still, the breads turned out fine, although the bloom was not as large as usual for this bread.  The crumb, again, ws quite moist, even moreso than the previous bake due to the added hydration. 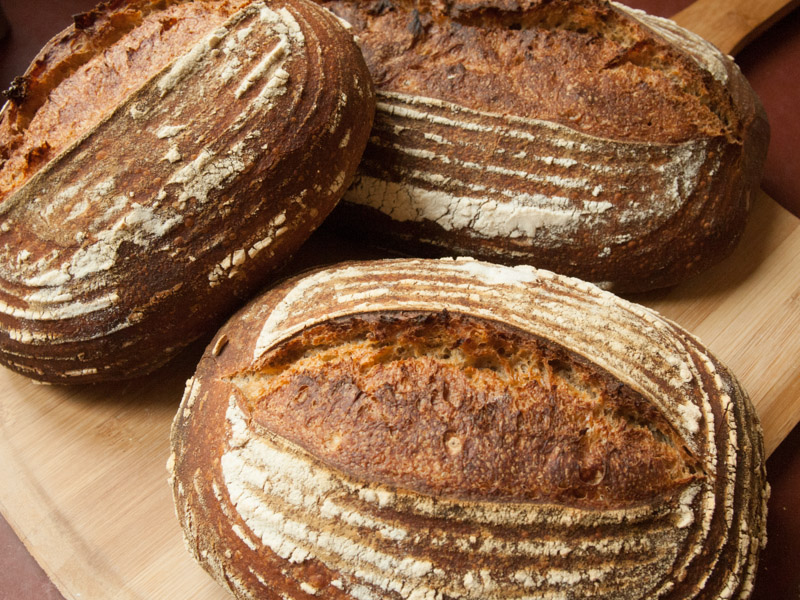 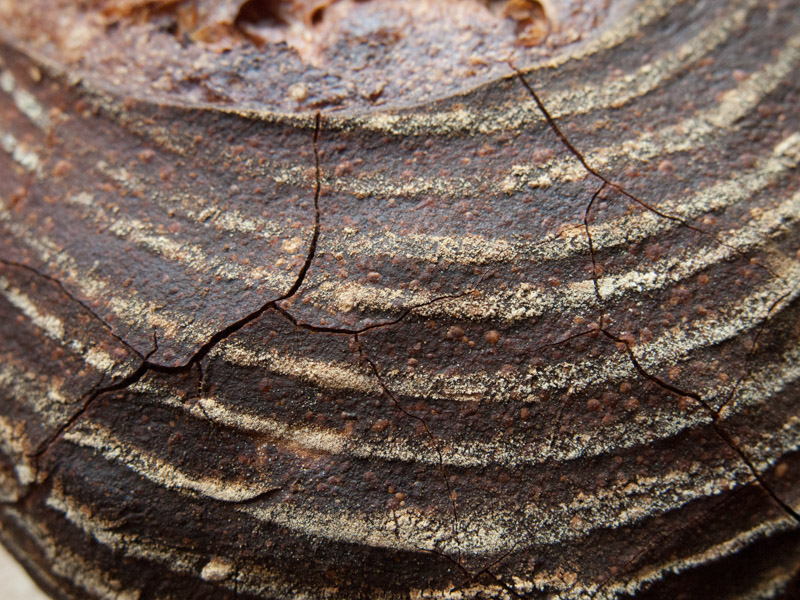 As mentioned, the crumb was moist and airy. 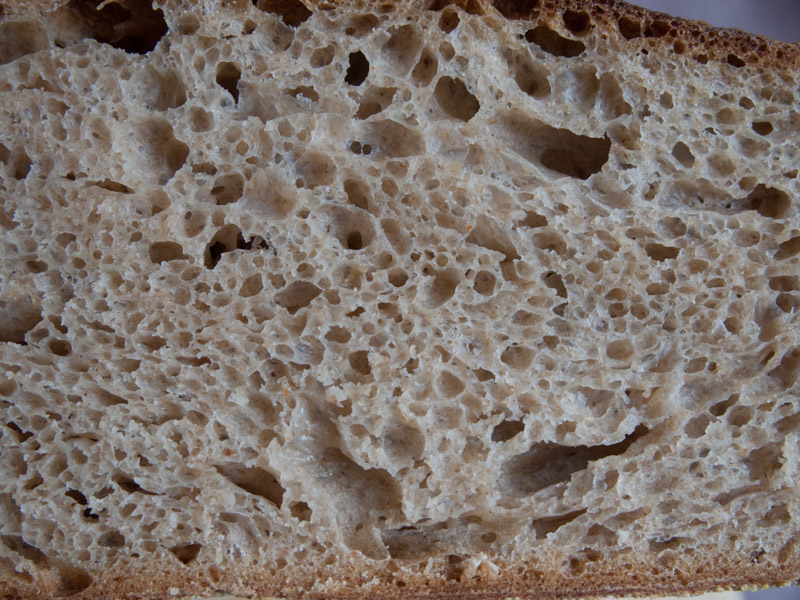 A few of folks have mentioned the boule scoring, so here are some photos. This boule was 1500 gm of dough, which is the largest I've done with this score. 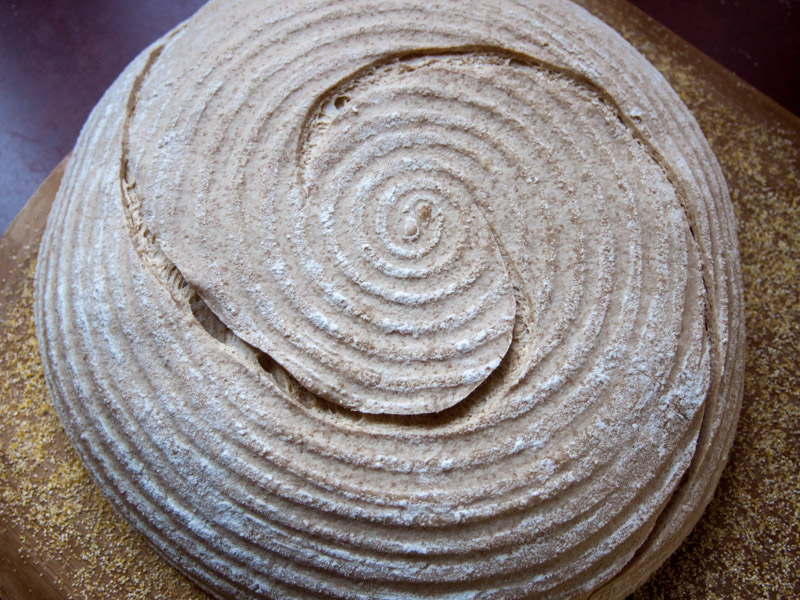 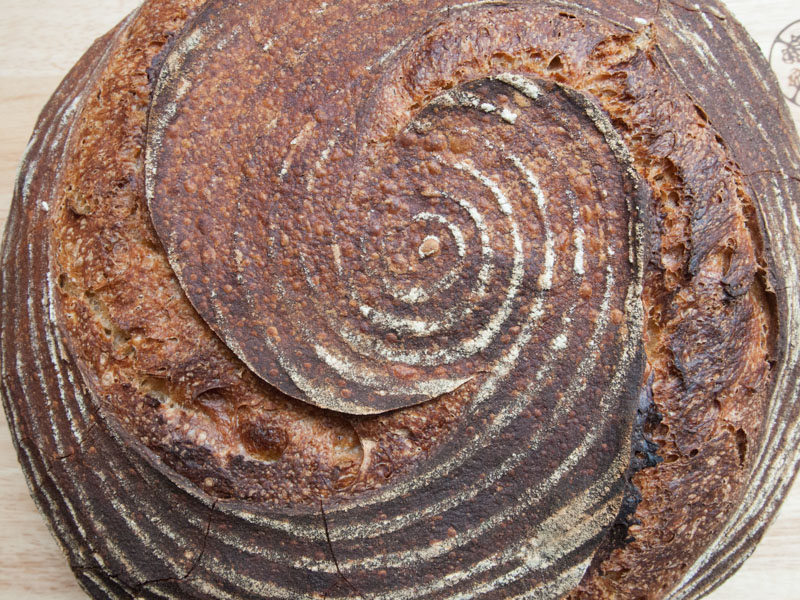 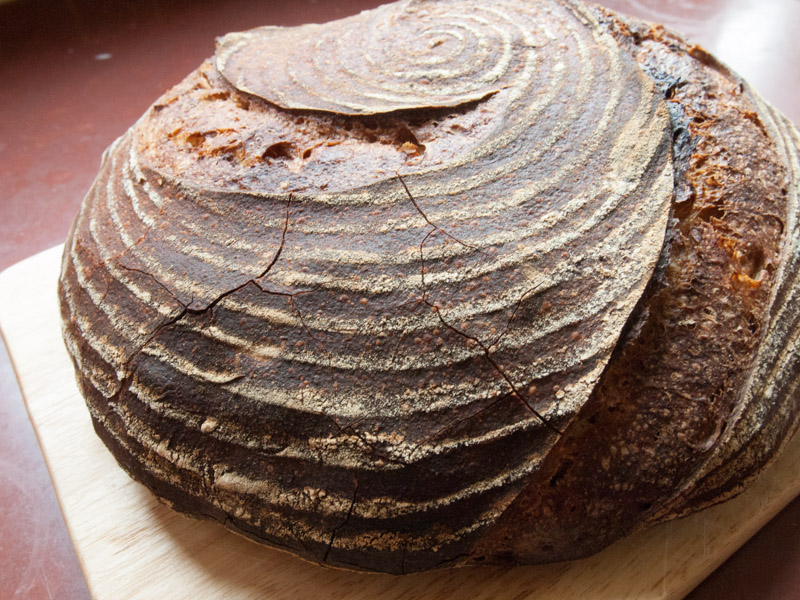 The flavors of both bakes were quite close, with good nuttiness and noticible tang that increased over the next few days.  Bake 3 was a bit bolder, in part to compensate for the added hydration, and had nice singing and cracks are seen throughout the loaves.  It was also more sour, presumably due to the increased fermentation from the higher ambient temperature.

I don't really have a conclusion on whether the salt was necessary for the autolyse, but I think it is not.  The autolysed flours for bake 3 were softer, but that was more likely due to the increased hydration rather than omission of salt.

Another thing I learned: the wheat germ absorbs a lot of water, much more than I expected.  Since it was the only ingredient other than the salt added when mixing the final dough, and I held back a small amount of water for the add, it was easy to see that all the water went straight to the wheat germ.  Next time, maybe include the wheat germ in the autolyse - has anyone ever done that?

If you're not baking a free style formula, you know  one that's spontaneous due what's in the cupboard at that moment, perhaps you could try soaking the wheat germ beforehand at the target hydration level and then add it to the final dough mix. Absolute precision in the measurements isn't necessary but as long as your close, it can work. I've found that three or four hours is adequate time for soaking wheat germ and bran. If you need to soak overnight so you can start at the crack of dawn, add a pinch of salt to the soaker.

That's such an obvious solution that I missed it completely.  Thanks for pointing it out, I will try the soaker method for the wheat germ.  Do you think if it is toasted that it will still have enzymatic activity and need salt?

They look great Brad, all 3! the crust and crumb shows that you did not loose much by the adjustments you did. I think it is clear now that it boils down to one's scheduling.  Bread making is a very forgiving craft.

Nice scoring by the way.

Thanks for your comments and for your suggestion to autolyse all the flours. If anything, I think the crumb improved by this change, and the taste seemed richer, too.  This recipe is becoming my go-to bread to accompany but not overpower food it is served with.

Yes, I am also coming to the conclusion that there is so much flexibility in timing that it can thankfully be fit into nearly any schedule.

are interesting reading Brad.  As for germ in the autolyse, I say it belongs there.  Germ is anywhere from 1/4 to 1/2 of the Toadie mix and Toadies always go into the autolyse here to get them as soft as possible (to help the crumb holes) while letting them release their toasted flavor.

For our taste we like equal parts of WW, Spelt and rye for the whole grains in the mix but that is personal preference.  We like to put as much othe whole grains in the levain as possible too so that they are as wet for as long as possible and give the levain a more sour note but again many SFSD breads aren't very sour to begin with and less sour may be what you are looking for.

We also put the malts into the autolyse too. White or diastatic malt is the one to watch out for if going in the autolyse because of the extra enzymes it imparts.  When it goes in we usually add some salt too but even that isn't necessary for shorter times.

Times are very different here in AZ because of the temperature difference.  I think you will like the results of the 75% hydration better too.  Without whole grains, 72% might work better.

Love your experiments and the results are spectacular.   Very nice baking indeed.

There is total agreement on the issue of making the wheat germ part of the autolyse or at least a soaker, so that will be my next iteration.  I haven't considered putting malt into the long autolyse for precisely the reason with enzymes that you suggest. I have used diastatic malt with shorter autolyse, and I'm the first to admit that I couldn't detect any difference it made in the final flavors or in the behavior of the dough, but maybe the sugars will help minimize overfermentation.  Thanks for the suggestions.

As a total aside, I made your red rye malt and used it in a rye bread a few days ago.  Couldn't believe how easy it is and how much flavor it adds.  I'll post something on it in a few days, stay tuned.

Toadies are the best bang for the buck that we have run across when it comes to flavor addition though.  If you like red malt you will love Toadies!  Some say a tsp of white malt is like adding a 1/4 C of sugar to the mix.  I think it is more like 1 tsp or 2 not 3 tablespoons like they say but you have try these things yourself to know what is true !  I think you are right and that the white malt helps make sure the yeast never run out of fructose, glucose and maltose to eat during long ferments, retards and the like.

Know this thread is 1 year old, but I need a little help, please!

In making pan breads, I've been adding most of the total dough's salt as the last ingredient during final-dough mixing.  As long as there's mixing that occurs after salt addition, a short rest, and another mix, it seems to get distributed throughout the dough just fine; and it certainly seems to dissolve, though this may take around 5-10 minutes during the rest between mixings.

When adding toasted wheat germ, I found it helpful to pre-moisten it, originally this was due to mixing results, it simply mixed better into the final dough when pre-moistened. So, yeah, it has its own autolyze of sorts.

Ever since I read Robertson's Tartine method I have been reserving a bit of water to mix in the salt after the autolyse for nearly all my doughs.  It works quite well, and like you, I have found that it dissolves and gets distributed quite readily. I've even used a very coarse Sel Gris without problems.  After all the suggestions, I think the soaker is the way to go for the wheat germ.