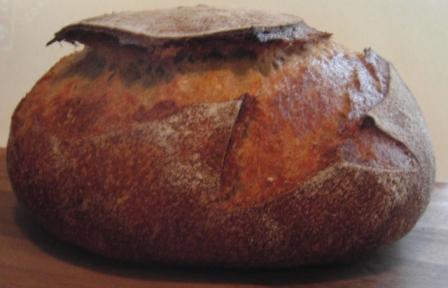 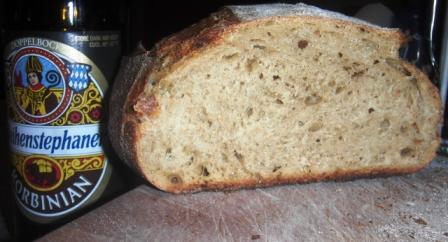 I've been experimenting with beer bread and granary style bread. For this round I used a doppelbock along with some stuff labeled malt powder that I got at my local Korean grocery store. I tried it with WW flour as is included in a lot of recipes, but I felt like it was competing with the malt powder, so this one is just AP flour, plus what's in my starter.

I think this was 9 hours from mix to start of bake. I kneaded it for about 5 minutes after I mixed it and then let it bulk ferment for around 3 hrs at ~86F, shaped as a boule and let it proof in a towel lined bowl for another 6 hrs at 86F again before slashing and baking at 450 F for 40-45 min. The big revelation for me on this bread was using a lame to make the slashes. Up until now I've been using various knives and the difference blew me away, hence the crazy pattern- I was just enjoying the ease with which I could make the cuts.

Very nice.  I love making bread with beer, ale, stoudt or hard cider.  Don't be afraid to mix in a bit of rye and whole wheat and or spelt flour for good measure.  Check out some of my concoctions on this site or at my other blog www.mookielovesbread.wordpress.com.  I have many recipes that I think you would enjoy.

In any case looks like you had fun with your new lame and you achieved a nice brown dark crust with some good ears.  I can't tell if your crumb is open or not from the photo, but in any case it must taste great none the less.

I was concerned the malt powder might make the dough too relaxed, so I kept hydration low as a bit of insurance. The taste has that particular malty sweetness from the malt powder that I really enjoyed in this particular iteration. I think it's personal taste, but I wasn't a big fan of whole wheat with the malt, but I might try rye. Sometimes I think that rye is the bacon of the bread world- it makes any bread taste better. You've done a lot of beer bread - do you have a favorite I should try first? That cherry cider bread in particular sounded tasty, but I haven't stumbled on any cherry cider in the store yet, unless maybe Wegmans had it and I was just too dazzled by their other selections to notice.

The Cherry is one of my favorites.  If you can't find a cherry just substitute another hard cider aband it will be fine.  I only use  malt once in a while but maybe I should try using it more.

let me know if you try the recipe.

The Cherry is one of my favorites.  If you can't find a cherry just substitute another hard cider aband it will be fine.  I only use  malt once in a while but maybe I should try using it more.

let me know if you try the recipe.

of a nice loaf of bread.  For a bread 3 times this size I would use 3 g of white malt and 3 g of red malt , maybe 4 each tops.  30 g is a huge overkill but I don't know what kind of malt it is.  Red malt improves keeping, flavor and color the white malt breaks the bonds down on carbs, turns them into sugars that the yeast and Labs can eat.  It shouldn't make the dough slack,  Usually the yeast have no problem keeping up with the enzymes creating sugars.  The hydration is a little low to get big holes if that is what you want, it'snot my bag,  but 68-70% will make the dough much nicer to work with and really improves the crumb. A 3-4 hour autolyse is also worth the wait - 2 hours for white breads.

It's an awful nice loaf as it is though with great spring and bloom-  and it has to taste great.  Nice baking!

hungryscholar
April 8, 2013 - 7:03pm
Still not sure exactly what that malt powder was

Thanks- I'm not quite sure what I bought, apparently it's meant to be used for making a drink. Nor am I sure exactly what the proportion of ingredients is in the English malthouse/granary style flours, but I've seen recipes with quite a bit of malt powder as well as malted wheat flakes, so that's what I was going for here. In a previous round I used some malted barley that I kind-of mashed, more of a scald, really. Either way, adding this much malt is a really interesting flavor and it retains some of the malty finish of a British style ale.  I had gotten used to 75%+ hydration but I've been hanging out in the 62%-70% range lately which means I've done some good old fashioned kneading after being in No Knead/S&F Land.

You were using the other kind of malt like in a malted milk shake.  Well, the more of that the better!