I was curious (again) .... I was wondering if pepper, if baked, would hold its flavour and heat... well it holds it heat a little there is a nice tinge on the tip of the tong after a few bites. But I was supprised what a nice flavour black pepper actually has.

The bread is light,soft with a nice crumb. So; all with all, it worked really well.

You can make this dough without the sourdough starter, remove the sourdough and increase the dried active yeast to 20gr. The sourdough just gives that nice extra flavour.

c)       Once the starter has reached the volume, quickly mix ALL ingredients together

e)      Kneed to fine window pane test, this takes a while

l)        Make incisions  any pattern you like, dust with rye flour

m)    Cover with a light cloth, and rest until double in volume

p)      Check by tapping the baked bread on the bottom, it needs to sound hollow 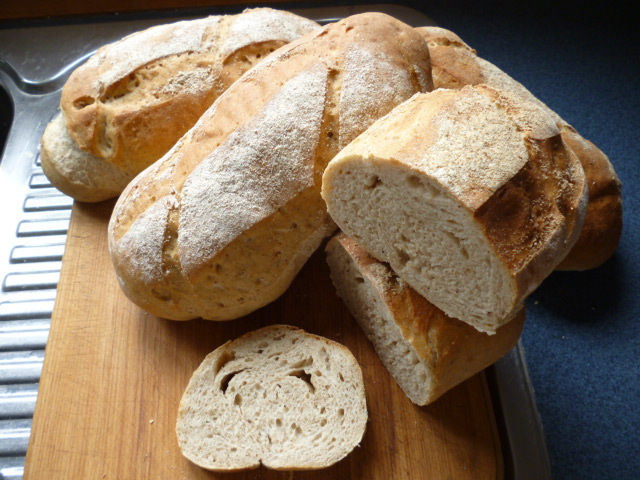 I made a chocolate and black pepper sourdough boule yesterday, although I used a fair bit more than 10g; I haven't tried it yet.

Yours have come out beautifully.

yes I think that would go nicely with some mascepone! I used to make a Chocolate bread with Dutch cocoa, large chocolate chunks and a fine chopped red chilli

bread with black pepper but yours has me wanting to try one out.   Amazing how well the semolina color came through on the crust with such a small amount - a little goes a long way.

Thank you, good luck and let me know how they turned out!

I threw some coarse pepper into my rye.  Can't wait!   Pepper is great in bread!

Good lookin' little breadies you got there!  Good idea, Marc!

Thanks, next stop pickled green peppers