Well, I'll be...! I finally got some photos to share and some material to put up on my blog! Even though I've not posted anything in the blog the last...oh well... nearly 12 months, I've visited TFL on a daily basis to try to keep up with what's going on in this wonderful community. One can find endless inspiration, stimulating discussions and plenty of food for thought in this place, and it just keeps getting better every day. After some starts and stops, I'm now easing back into my regular baking habits, and I usually bake a loaf or two per week. Just enough to keep me stocked with decent bread.

If you don't mind, I'll go ahead and pretend that it's been, ehm, some two weeks since my last blog post and not nearly 12 months... So... where was I?

It's Easter, which means a few days off work, and time to indulge in my favourite hobby once more. Judging from the recent score of blog entries, Easter seems to be the season for miches... Outstanding loaves people have baked, no doubt!! This week, I decided to bake a multigrain sourdough bread so that I avoided having to compete with the rest...

This is a rather straightforward formula, some 15% each of whole rye and whole wheat, and 70% bread flour. The rye comes from a ripe rye sourdough starter. As for the soaker, it's basically the same soaker as in Hamelman's five grain levain, but with chops instead of cracked rye. It's also a cold soaker, since I didn't use any cracked rye. Hydration comes in at about 102%. 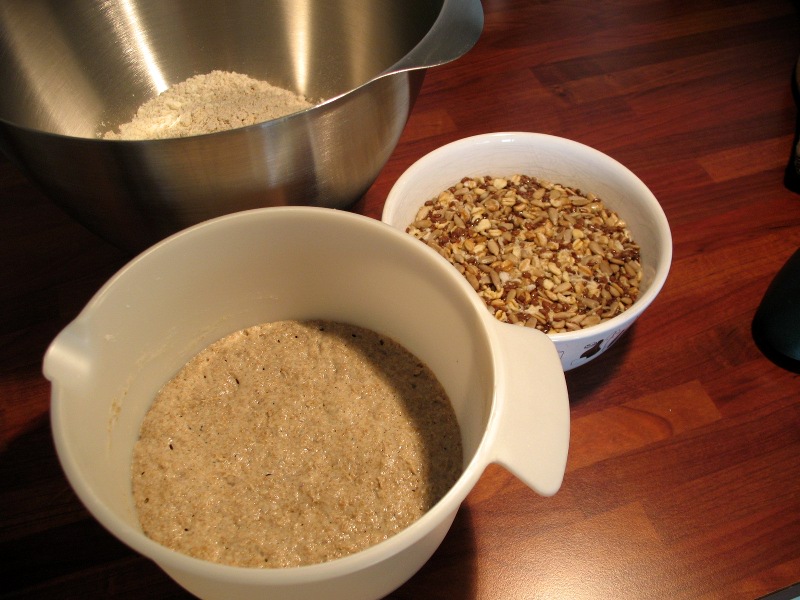 Combine everything with a spatula into a shaggy dough and let rest 30 mins, just to let everyone get acquainted and allow the flour to fully hydrate. Finish mixing a few minutes on second speed. 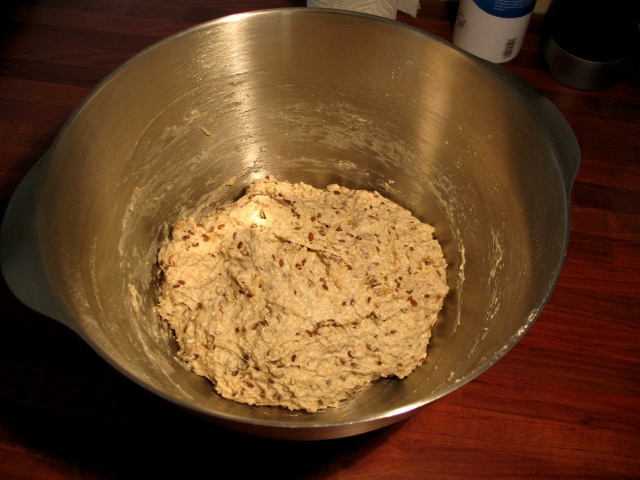 Bulk ferment for me was just shy of 2hr 30mins, with one fold midway through. Preshape, shape and then proof at least 8 hours in the refrigerator. Bake directly from the fridge, using the steaming setup of your choice, until the crust is wonderfully golden and the kitchen is filled with a most agreeable smell. 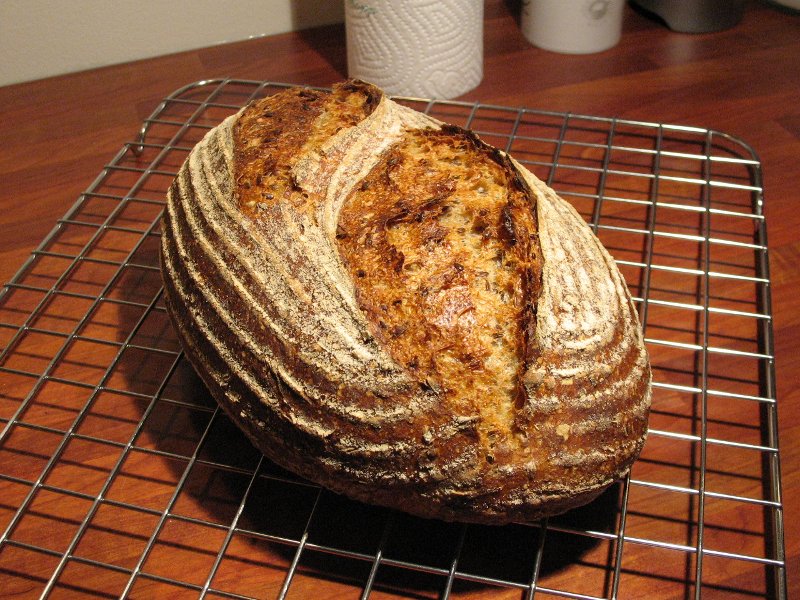 It turned out quite good, and I'm very happy with the flavour of the bread. The rye sourdough and the grains in the soaker give it an intense smell and flavour; very robust and wonderful with butter and cheese. I think the formula needs a bit of tinkering and optimisation, but for now I'm happy to enjoy a pretty decent multigrain sourdough until the next batch. 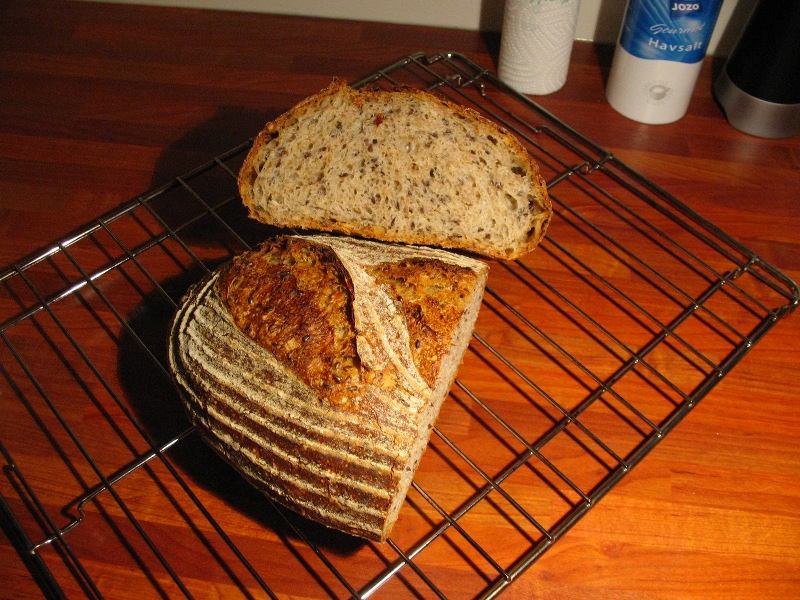 As you might have noticed from previous adventures into the world of flour, I like to follow-up a bread with some pastry. Yesterday I put some puff pastry together, for the first time following Bo Friberg's instructions. The overall recipe is similar to any other recipe for the stuff, but Friberg instructs to put some of the flour into the butter block itself, making it more pliable and similar to the dough in the way it feels. A made the small-batch version from his book, and to prepare the butter block, I let the butter soften at room temperature for about an hour, put it into a large mixing bowl, and incorporated the flour (and a bit of lemon juice) with a spatula. The butter was then smeared into a 15 cm x 15 cm rectangle on cling film, wrapped well, and chilled overnight. The next morning, I let it sit out on the kitchen table for about an hour to soften a bit, while I prepared the dough.

I've made puff pastry some times in the past, but I'm always a bit nervous going into the ordeal. I have the impression that even the smallest of mistakes in the early phases (especially during mixing of the dough and then encasing the butter block afterwards) will magnify over the course of repeated rolling and folding. I'm glad to say that it went like a breeze this time, and it's probably the best puff I've made so far. I'm not sure if that's due to flour in the butter block, if I was simply lucky or if gained experience weighed in this time around, but I know that I'll be returning to Friberg's recipe next time the world calls for some of my puff. Below is a photo snapped by a happy baker, after completing the fifth and final fold. Wrapped in plastic (just like in Twin Peaks), and ready for the fridge. 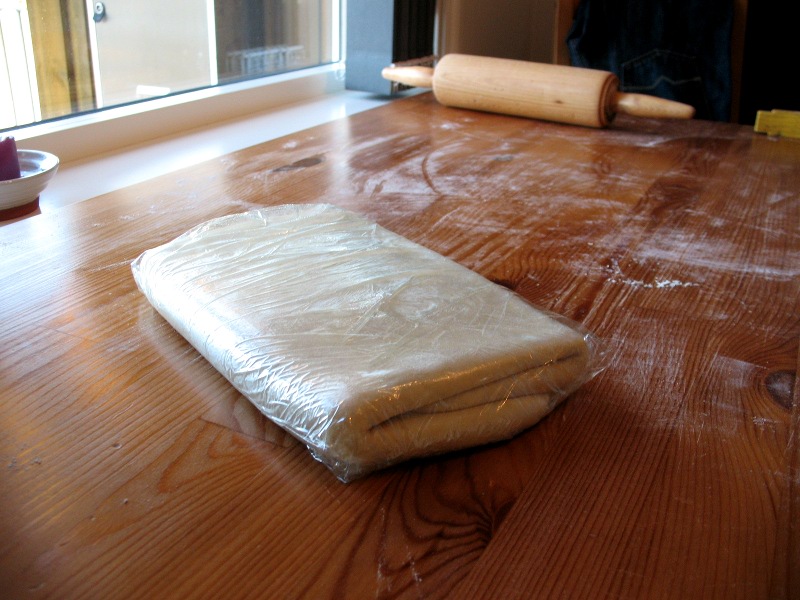 So... what to do with these carefully layered sheets of dough and butter? I visited my parents for a cup of coffee this afternoon, so I decided to bake some pastries to accompany that. Below is a photo of made-up puff pastry diamonds; a layer of pastry cream at the bottom (left), then some spoonfulls of chunky apple filling on top of that (right). Egg wash and off they go.

They came out wonderful, and as I said, I was really thrilled with this batch of puff. 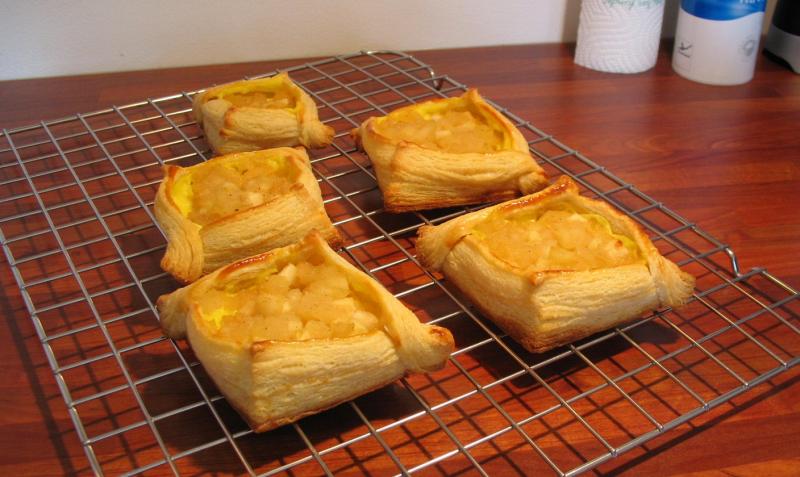 After two looong days in the kitchen, time for some comfort food for the busy baker. The crust is all sourdough, made with some excess ripe rye sourdough, and mixed with durum and bread flour. Sauteed onions, salted anchovies, olives and thyme on top. A glass of red wine to go along with it. Very happy.

Have a lovely Easter all!

Outstanding as always Hans, the Five Grain Levain, the pastries, and the lovely pizza all look delicious. I been playing around with puff pastry lately myself and having a great time with it. It's gotten to the point now where it's become a staple item in the freezer for me becuase of it's versatility. Nice work on the lamination of your pastry Hans, the lift is excellent. What percentage of flour to butter does Friberg recommend for ther butter block? I've been going with 40% as per Suas recommendation in AB&P and it seems to work just fine with the butter I normally use. Always a treat to read one your posts Hans and looking forward to your next one.

Thanks a lot, Franko!

You're right, it's very nice stuff to have in the freezer and, once thawed, can be made into great savoury dishes or pastries. As for the butter block, flour is 25% of the butter weight in Friberg's recipe. Compared to the total yield, the weight of butter is approx. 45% in Friberg's recipe (vs. 50% in Suas). I don't think I've spotted that recommendation in AB&P yet, Franko - where did you find it?

Suas recommendation can be found on pg. 491 under the section for Inverted puff pastry, the kind I've been making lately, despite the fact I don't have a sheeter, reversible or otherwise as Suas also recommends.

No empty promises from you - you did revive your blog! :) And you really seem to have tamed your new oven, that bread looks perfect. You baked this covered with a bowl then?

Funny that you should present us with some puff pastry, as just before coming to check out the last posts on TFL, I put mine into the fridge before the next turn. I am responsible for some appetizers for tomorrow's Easter meal (on Saturday evening) at our friends' place and decided to make some puff pastry for small vegetable tartes (I'll be roasting many different vegetables to top them with). I hope they'll turn out half-way as beautiful as yours. Very professional shaping!

Just recently I mentioned to my husband that I will put anchovies on the next pizza I'll be making, whether the rest of the family likes it or not. They think they don't, but I believe I need to be pushing this a bit on them. If they never eat them, how will they ever get used to them? And doesn't one just have to love anchovies?

I am very happy to see you posting again! Happy Easter!

Hans.  This bread reminds me of a recent bake of mine found here: http://www.thefreshloaf.com/node/31655/multi-seed-loaf-rye-spelt-flour

the only issue i had with mine was the overly hard whole berries on the crust.  A bit on the tooth breaking side.  Did you have this issue with your chops?  If not i would love to replace my formula with yours.

You've lost none of  your 'chops' in your absence!  Beautiful bread and gorgeous laminated pastry.  I'm strictly a lurker these days - busy about to help open a new restaurant in Washington, DC, but I couldn't ignore your post.

@ chouette: Thanks a lot! Oh, and good luck with your appetizers, chouette! I hope and trust they'll turn out fine. It's a wonderful way to start a meal, no doubt about that. I'm sure they'll come around and love salted anchovies on pizza (and in any other cooking as well!) once they take their first bite into the pie. Keep pushing! I've seen some pissaladiere recipes suggesting that the anchovies should be slightly soaked to de-salt them a bit prior to baking. I used a small glass of anchovies I brought back home from Sicily earlier this year, and they were not too salty (just plain delicious, soaked in olive oil as they were). Yes, the bread was baked on a pizza stone, covered by a cast iron pan. Finally, when I slice into breads, shards of crust are flying once again.

@ John: Thanks! No, the chops soften after a few hours in the soaker. Rye chops is very common ingredient in muesli over here, and it softens up pretty much like rolled oats do. I guess the cracked wheat on the crust turns hard during baking as it's drying out once again. If you like to give it another spin, you could try to cook cracked wheat and rye berries in water until al dente, then cool and mix in with the rest of your soaker? Otherwise, rye chops are great. Thanks again!

@ Larry: Great hearing from you, and thanks for your kind words! I noticed a post from you a few backs, calling for bakers for a new restaurant, so I was pretty sure that you're keeping busy. I'm truly inspired by your own journey, Larry, and I'm very happy to hear that you're thriving and enjoying where you are right now. I perfectly understanding lurking, Larry, especially after a long day with your nose deep down in the flour sacks or mixer. Baking is perhaps not the first thing that comes to mind when you're back home and with some precious time off. Thanks again, Larry!

Your contribution were missed, Hans.. I'm pleased that you decided to post again.

The multigrain bread is very attractive, and so are your beautiful pastries. Thanks for the info on the puff btw.

What kind of great lift on the Danish Diamond puff paste is that?  baking the bread directly from the fridge worked well.   The anchovy pie has to be tasty too.

What a treat to see what you have been up to.  Beauties all!

I am about to have a new wall oven installed....I dread the break in time....learning how to best work with it once the 'fumes' burn off....I am sure it will be very different than my Cadco but I always have it to turn to in the event that I can't get the results I want...

Thanks for the update and welcome back :-)

Thanks so much Khalid, db and Janet!

I can see I shall have to dust off the books and see what I can come up with for puff pastry, I haven't had a lot of luck with laminated pastry but will give it another try. Sure wish I could find a sheeter for cheap or free! That would be wonderful, although of course that would have its own set of problems to solve, like a huge kitchen reno! :-))